Brandon is an excellent athlete and hand-to-hand combatant, with superior agility and surprising strength. She can use the “rooftop express” – quickly crossing dense urban areas using acrobatics and a swing-line.

She’s also a gifted archer, a competent drama student and an attractive person with an outgoing, warm and charming personality.

Apparently Bree builds her own gear. She took extensive shop classes in high school in order to do just that. This profile assumes corresponding technical skills.

Bree Brandon, of the Brandons of Pittsburgh, is the heir to the biggest brokerage house in Pennsylvania. Her father apparently died while she was a teenager. Having no siblings, and with none of the Brandon cousins having a head for maths, it fell to her to manage the family business as soon as possible.

However, though she had the intellect and energy to run a company, Bree’s interests lied elsewhere. During her teens she kept imagining herself as a super-heroine rather than a manager. In high school, she had gone so far as to make a costume for herself. Bree also took shop classes to build a custom bow and trick arrows.

One assumes that she also trained in the martial arts, acrobatics and archery from her mid-teens onward.

As she became a young adult, her interests evolved toward theatre. She applied to Vandemeer U. due to their reputed drama studies department. However, familial expectations meant that she took her major in business studies, which she found insufferably boring.

She joined the drama club and got a part in their production of Pirates of Penzance , but was otherwise bored out of her mind.

She soon cracked. In 1986 she decided to have fun by putting on her heroic archer costume and prowling around Pittsburgh.

A little sugar in my bow

Calling herself “Moonbow”, Brandon extensively scouted the operations of the two main Pittsburgh mobs. She spotted a weakness – the money-collection schedule for their rackets and laundering was amazingly regular. Moonbow decided to hit the cash transportation teams.

Pittsburgh having no history of vigilante-adventurers, the mobsters were caught completely cold. After her successful forays, Brandon ended up with three bags full of large bills.

Both mobs and the Pittsburgh PD reacted poorly to Moonbow. The cops deputised Firestorm (who had recently started operating in town) to catch her, but Brandon managed to elude him and went home with the money.

Bree decided to be a class act like Robin Hood, and to give the money to the poor. She dropped one of the cash bags at a local mission. She then sneaked into the mansion of a mob leader, Mr. Benedict, to empty the safe. 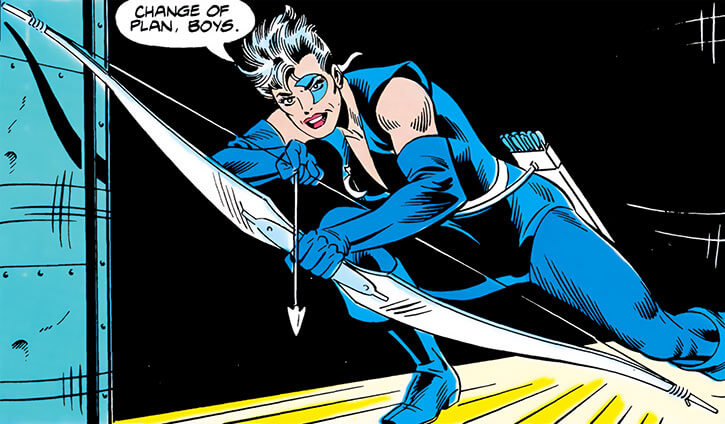 That was the point where she overextended her considerable talents. The don’s men were professionals who caught her after she was shot in the shoulder. Benedict told them to just drown the captured heroine in his pool. Thankfully, Firestorm arrived just in time to save her.

The pool’s water had washed off Moonbow’s face paint, and Firestorm (who attended Vandemeer University in his civilian identities) recognised her as Brittany Brandon. Being on friendly terms with Brandon in college, Firestorm let her go without arresting her. He reasoned that the gunshot wound would keep her out of action for a while.

The remainder of Brandon’s career is unrevealed – including whether she resumed being Moonbow.

However, when Wonder Woman assembled an all-female strike force to retake New York City in 2001, Brittany Brandon was among her troops, in full Moonbow costume and armament and not looking much older.

Bree is a textbook example of the Thrill of Adventure character motivation. She needs danger, adrenaline and adventure, and finds ordinary life terribly boring. As Moonbow she wants to buckle all the swash she can get, to look stylish and daring, and to do exciting, classy stuff – with panache !

Getting shot was a shock for her. Suddenly, it wasn’t a cool and thrilling game anymore and she was going to die. How she dealt with that in the long term is unknown.

“The last couple of hijacks were so easy. I was about ready to quit. No challenge. No thrill.”

“My name’s Moonbow. Try to remember it when you wake up.” (Swonnk !) “I always wanted to say tough-guy stuff like that. But when would I ever get the chance in a management class ?”

Some stats are speculative due to lack of material. 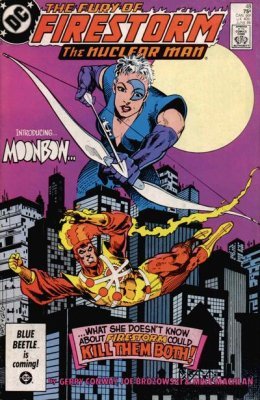 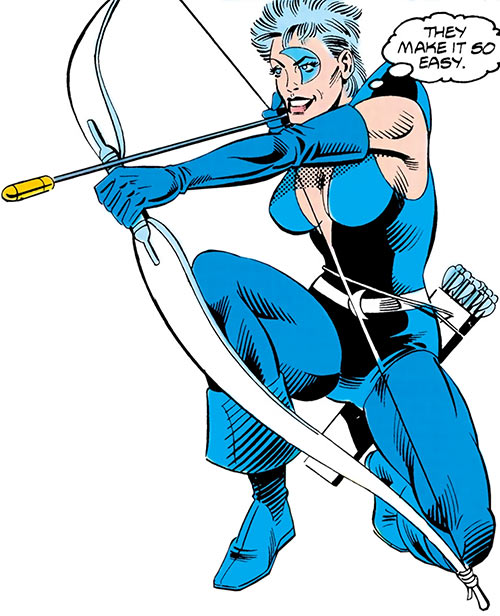 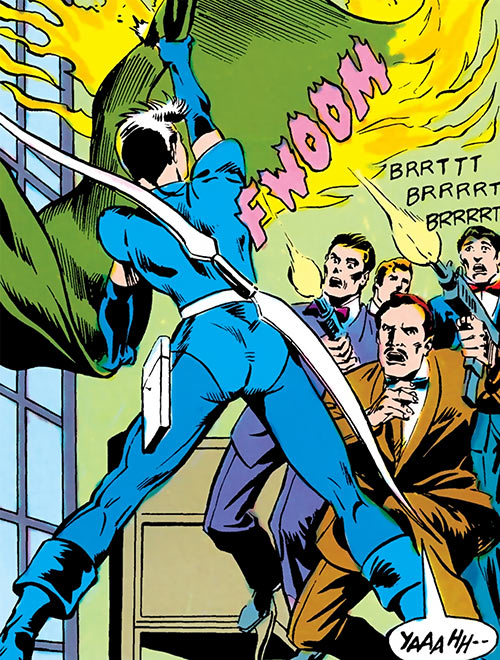 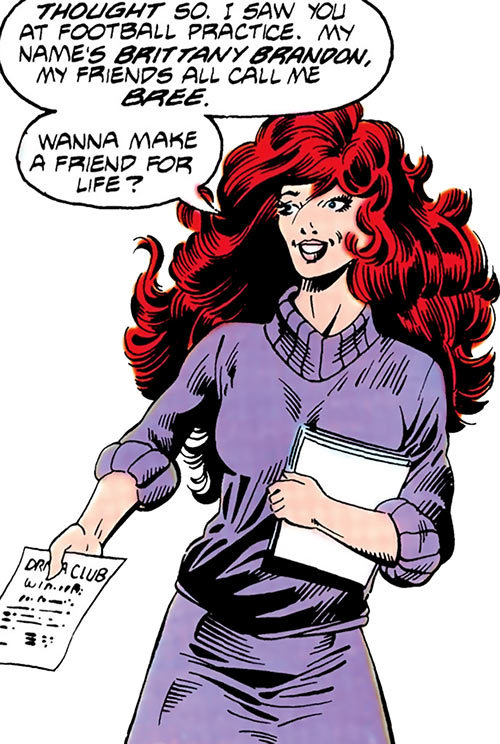