Moondark initially had but the Hypnotism power (which, in itself, is pretty useful). He was later granted full Sorcery and augmented Mystical Attributes by the Dark Beings.

He has been documented using this ability to :

He seemingly conducts regular scans using Detect (Superhumans). This is because Moondark is convinced that any superhuman in the area is there to oppose him.

Moondark seems to be very good with demons. He’s always convincing the Dark Beings to strike deals with him or mesmerizing the Blaze-less Ghost Rider. He was also skilled enough to build two soul-stealing artifacts, which he said were made “from the substance of both this world and the next one.”

While his soulless nature protects him against some dreaded mystical attacks, his body is still vulnerable. And he knows that if his body is also lost, all will be lost.

Moondark was a stage magician. He had adequate technique, but little imagination or stage presence. However, he also had a talent for entrancement.

Moondark came to worship unspecified “Dark Beings” led by a Dark Master. These greatly enhanced his mystical potency. The nature of these ’dark beings’ is unclear, though they looked like generic grotesque demons. They might be Dykorrs.

Such was life in the Golden Gate

Moondark was unfolding his nefarious plans in San Francisco when Peter Parker flew in for a photoreporting assignment. Sensing a superhuman, the paranoid and narcissistic Moondark assumed that a confrontation was nigh.

He lured Jack Russell, his sister and his best friend to his stage magic show. He then mesmerised everyone and ordered Russell, as the Werewolf, to track down and kill Parker. The tenacious lycanthrope clashed with Parker several times, while Moondark remotely transfixed all witnesses.

But the two (who previously had no idea Moondark even existed) allied as the sun turned Russell human again. This brought Spider-Man to Moondark’s sanctum. Russell mystically returned to his werewolf state under Moondark’s influence and assaulted Spidey anew. But during the fight Spider-Man tackled Moondark through the Mists of Passage, unaware of their mystical nature.

Both were Warped over the Golden Gate Bridge. Spidey narrowly managed to grasp the bridge to stop his fall, but Moondark plunged to his seeming doom.

That is not dead which can eternal lie

As per their prior deal, Moondark went to some demonic dimension  after his death. His masters took his soul. Howbeit, Moondark bargained for the possibility of obtaining souls in exchange of his own. He returned to Earth, crafted special mystical artifacts to steal souls and took over a carnival as his base.

Realizing that the temporarily employed stunt rider, Johnny Blaze, already had sold his soul to the Devil, Moondark proudly stole said soul. This led to Blaze turning into the Ghost Rider, which Moondark entranced. Moondark used the Rider for his freaks show, as the Blazing Skull (possibly as an homage to the wartime superhuman of the same name).

Peter Parker, visiting the carnival with Glory Grant, recognised the Rider. He thus came back as Spider-Man to investigate. There he confronted the Freaks, mystically-strengthened carnies, and a hypnotized Ghost Rider. The latter eventually defeated and captured Spidey.

But Spidey later managed to break Moondark’s ring, thus freeing the Ghost Rider. However, their combined efforts were still not sufficient to defeat Moondark. Instead, the Rider used his mystical hellfire to destroy the orb. This resulted in Moondark being summoned by the Dark Beings to be killed and punished.

Moondark came back from death and damnation, of course. He decided to recover Johnny Blaze’s soul, since it had obvious value and could be traded for his own.

He set up his headquarters in a cavern in the Las Vegas desert, and sent demonic vultures to capture Blaze in Vegas. The vultures narrowly failed against the Ghost Rider, who reached the cavern. There, Moondark mystically disguised himself as Blaze’s old girlfriend, Gina Langtree. This subterfuge was sufficient to make the Rider change back to Blaze, who was captured.

Moondark then produced his new Soul Orb. He was about to have it absorb Blaze’s soul when the Phantom Rider (Hamilton Slade), who had been mystically warned and had just killed the two demonic cougars guarding the entrance, intervened.

The Phantom Rider weakened Moondark’s concentration, and the Ghost Rider burst free. Although hellfire could not hurt the man with no soul, physical burning was sufficient to make him drop his Orb, which was lost under a wall of flame. Deprived of his means to collect souls, Moondark had to retreat to the extradimensional  realm of his masters.

Weakened but lusting for vengeance, Moondark came back mere weeks later. He allied with the Water Wizard after appearing to him as an image reflected on water.

Moondark could not do much directly, as he had been defeated too recently. But he could enchant his ally and make him powerful enough to crush their common enemy. The plan would have worked, too — but the Water Wizard started ranting about his awesome power. This proved unbearable for the tremendous ego of Moondark.

Moondark was unable to witness the Wizard taking credit for a victory he felt he had entirely engineered. Therefore, he taxed his mystical strengths to journey to Earth, which he was in no condition to do.

Moondark popped in to brag about how he had been behind everything. The Rider blasted him with hellfire, forcing him to retreat. This took away the Water Wizard’s enhanced might and thus precipitated the Wizard’s defeat.

Moondark has not been seen since.

Not much, really. I guess the quotes and the History tell you everything you need to know. Grandiloquent, huge ego, paranoid, long villainous rants, etc.

“The name is Moondark, my boy — you’d do well to remember it, for soon, thanks to your presence here, the whole world shall change at its mention ! Now be silent — and gaze again into my eyes ! We have little time to waste !”

“A splendid idea, shaggy one — bringing the costumed interloper here ! Now, I will have the pleasure of witnessing his frightful demise personally !”

“Ah, good ! All is silence, now ! Whoever the intruder was, by now he lies without my cavern, in a mangled heap of bones ! And now, Johnny Blaze, your doom is at hand, as well ! See how the soul-devouring spirit rises forth from my orb, to rip your soul from your body and to… What ?! Who dares —?!”

“You can’t intimidate me with your simple-minded parlor tricks ! I am one who has journeyed to netherworlds without number, who has taunted demons and lived to boast of it ! In these hands reside powers unimagined by mortal men ! And with these powers, I will obliterate you — I swear it !”

“Moondark ! The most awesome master of the dark forces the universe has ever known ! Moondark, whose very name sets the brimstone biker to trembling with fear !”

Moondark (as enhanced by the Dark Beings)

Advantages:
Gift of Gab (this only applies against demons, but is also applied when using such Powers as Hypnotism, Broadcast Empath, etc.), Scholar (soul-stealing artifacts), Misc.: Moondark no longer has a soul, making him immune to certain attacks (such as the Ghost Rider’s Penance Stare), Note: Moondark is not really Homo Magi — he has been mystically invested by extradimensionals.

During his second appearance, Moondark used four ferocious and pretty big guard dogs. He also fielded the Freaks – Gorilla Girl, the Muck Monster and the Amazing Six-Armed Spider-Man. But only the Six-Armed Spider-Man fought for him, without much success.

Since they appeared again, the Freaks are probably best treated with a writeup of their own. Of course, it’s not like wantonly obscure characters would ever appear on WORG, so maybe not.

Moondark also seemed to Enchant some of the carnies he hypnotized to give them something like STR 06 BODY 06.

When he did not have access to mesmerized werewolves, mutant carnival freaks, hypnotized and magically strengthened rubes, etc. Moondark would conjure demonic animals from nether dimensions to do his bidding. Examples follow.

Bonuses and Limitations:
Magic Field is Self Only, but they can Attack Thru.

These gigantic vultures are bathed in a weird, very green,shimmering glow. Their body is as big as a man, their claws can shear even superhumans, and hellfire will set them aflame but not destroy them. However, these craven monsters will flee if one of their number is killed.

Those tiger-sized cougars glow like the vultures, but with a darker green. 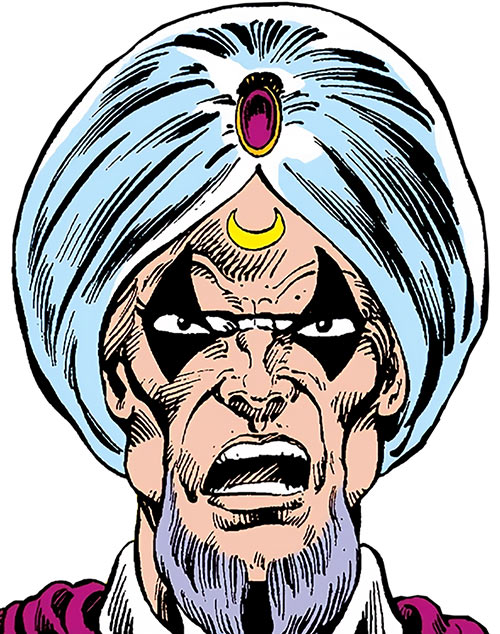 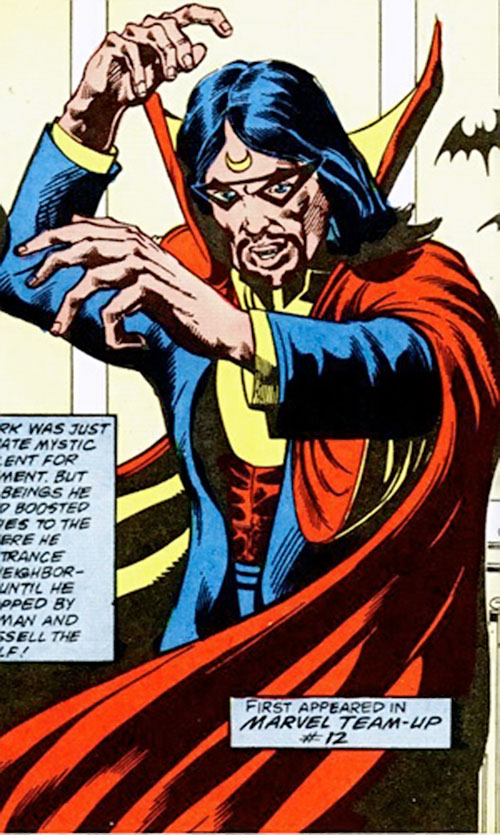 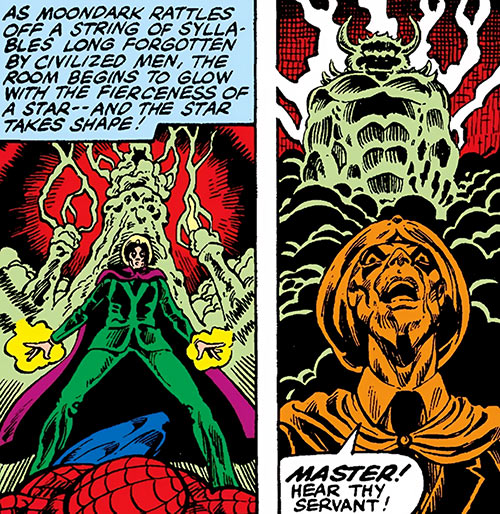 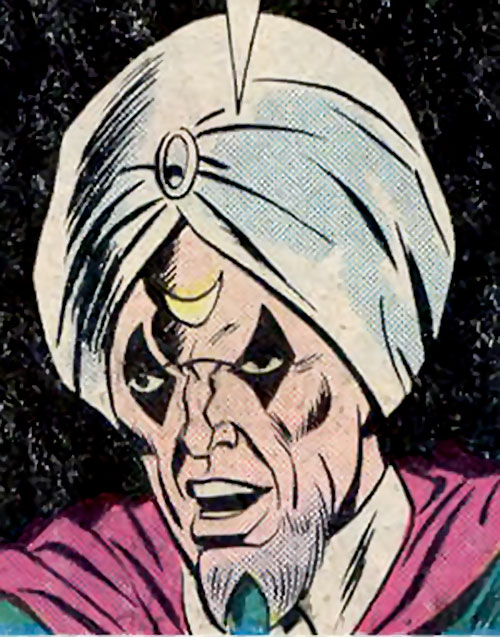 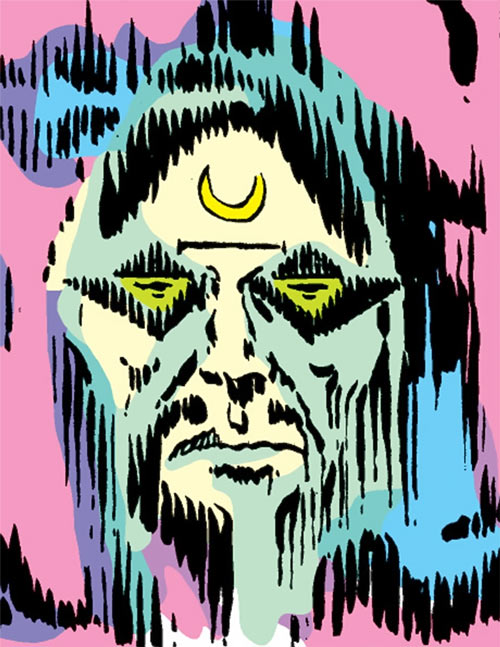