Moonstomp has the same shape-changing abilities as the rest of the Skrull Kill Krew. The alien virus allows him to take the form of a minotaur, stretch his limbs, and see through any Skrull’s disguise.

He has also learned, (Ryder probably taught him), to communicate via telepathy. Later on, he learned to manipulate the flight path of his skinhead hammer Nobbler.

Moonstomp is surprisingly smart for a thug and often teaches the other team members a thing or two. His criminal past has taught him with mechanics, vehicular skills, thieving skills as well as the usage of weapons, particularly hammers.

Moonstomp used to be a British thug, but got infected with the lethal brain eating alien virus which also gives him powers. He was recruited for the Skrull Kill Krew by Ryder and taught how to use his newfound abilities.

Moonstomp continues to be the second-in-command of the Skrull Kill Krew and mashes the heads of any Skrulls they may find on the Earth.

Moonstomp wears blue jeans, black leather boots, a white T-shirt and a brown leather jacket with a orange star and a green Skrull head on it on the backside. On the T-shirt it says “Atom Heart Nutter”.

(This is presumably a reference to Pink Floyd album Atom Heart Mother, whose cover was a photograph of a dairy cow — Ed.).

His hair is short-cut and blond. Peculiarly he has brown spots on both his skin and his clothing in different locations.

During combat people tend to get scared of him while he’s hammering around.

Moonstomp is a former British punk and has a vicious personality. He is ecstatic in combat, but wouldn’t hurt teammates. He often taunts the other team members as well as enemies. He has no regrets as to killing and often does so.

Sometimes he just has to use his hammer on something ; anything in the vicinity will do. Also sometimes while talking his eyes glow with a mad glow and he attains a vicious grin.

Seemingly the only reason for Moonstomp to participate in the Skrull hunt with the team is because it gives him a chance to kill and destroy.

Moonstomp also is a white supremacist and hates black people although Ryder is mostly considered a friend. Lastly he really enjoys combat and even talks to his hammer rewarding it when a lot of successful smashing has been carried out. Shortly put he’s a dangerous psychopath and sociopath, but gladly follows orders from Ryder.

“Well done, Nobbler, you just took a chunk right off him !”…

Well, Skrulls aren’t a big part of the DC Universe and considering they are all that is important for Moonstomp (killing them, that is) you can’t just trough him in as is. Either change his obsession to Durlans (some sort of tie-in with the Invasion is needed here) or also insert the Skrulls into your DCHRPG campaign.

Somebody also suggested using White Martians instead, but the problem would be that the Skrull Kill Krew would have a very big problem trying to kill them.

One could, of course, also use Moonstomp as a superpowered thug going after some DC aliens or black people, but that would sort of destroy the entire concept with the Skrull Kill Krew.

Notes:
Eventually can develop Thermal Vision, Invisibility, Teleport and Regeneration like his teammate Ryder has done.

Note:
Vehicles include the Repair bonus (+1). 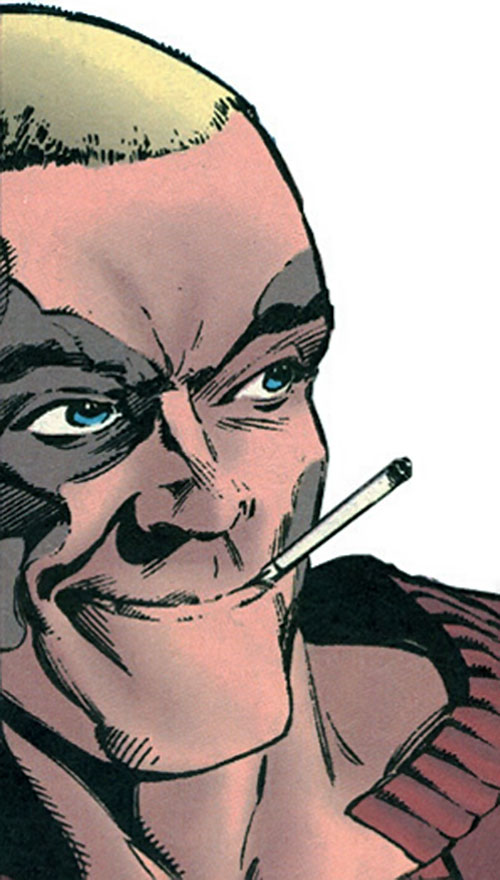