This is an ancient, grizzled profile for Marvel Comics character Morbius the Living Vampire as he appeared during the 1970s and 1980s. Morbius appeared in 1971, sort of making him the vanguard for the later wave of “horrorsploitation” Marvel characters.

These are mostly technical notes — probably a Marvel Super-Heroes RPG adaptation, given their age — rather than a full profile.

This writeups is followed by the profile for the revitalised (a revamp, if you will) version of Morbius from the 1990s.

Morbius was not a true vampire. He was a pseudo-vampire, a humanoid being who had various drives and characteristics in common with true vampires. True vampires are actually corpses reanimated through supernatural means and in possession of supernatural abilities.

Morbius did not die to become a vampire. Since he was never a true vampire, he was unaffected when Doctor Strange used the Montesi Formula of the Darkhold to destroy all of Earth’s vampires.

Like true vampires, Morbius needed to ingest fresh blood in order to survive. In his case, in order to replenish the blood cells that his disease was dissolving, as well as for the standard vampiric reasons.

Like a true vampire, Morbius’s bite deposited a certain enzyme in the bloodstream of his victims. In many if not all instances, the enzyme would catalyze a transformation of the victim himself or herself into a pseudo-vampire like Morbius.

The victims in such cases did not truly die in the process of becoming transformed, as a true vampire’s victim would, and could be cured through an antidote Morbius discovered, although it would not work on Morbius himself.

As a pseudo-vampire, Morbius possessed enough superhuman strength to hold his own in battle against Spider-Man. In this form Morbius could lift (press) at least 1,500 pounds. Somehow, Morbius was able to glide on strong air currents, assisted by the wing-like projections on the arms of his costume.

As a pseudo-vampire Morbius had a somewhat tougher body than an ordinary human’s due to his superhuman strength. But basically he still had all the vulnerabilities that an ordinary human does, unlike a true vampire.

However, he had none of the special vulnerabilities of a true vampire. He was unaffected by garlic or by religious symbols. Silver could not affect him in and of itself, although, of course, a weapon made of silver would affect him just as it would affect an ordinary human.

However, as a pseudo-vampire Morbius possessed the ability to rapidly regenerate any damaged tissue so that he could fully recover from gunshot or knife wounds in a brief time.

Pseudo-vampires created by Morbius did not have this ability and disintegrated upon being mortally wounded. Morbius slept during the day due to his aversion to sunlight, but direct sunlight would not cause his body to decompose as it would a true vampire’s body.

Also, Morbius’s sleeping state was much like that of an ordinary human’s, complete with dreams. In contrast, true vampires sink into coma-like trances during the daytime. Morbius had no shape-changing abilities and no powers over animals or the weather, unlike true vampires.

Dr. Michael Morbius was a Nobel Prize  winning biochemist. He discovered that he was rapidly dying from a rare disease that was dissolving his blood cells. He kept his illness a secret, even from his fiancée Martine. He told his friend Nikos and together they worked to find a cure.

Morbius attempted unsuccessfully to slow the progress of his disease with fluids containing distilled substances from the bodies of vampire bats.

Shortly before he would die from the disease, Morbius rented a small yacht so that he and Nikos could conduct their final attempts to discover a cure undisturbed. They were only accompanied by the still unsuspecting Martine. One night Morbius had Nikos subject him to an electrical shock treatment in an attempt to stimulate the creation of more blood cells in his system.

The electrical shock somehow acted as a catalyst for the chemicals from the bats that were in his bloodstream, which then wreaked a radical change in Morbius’s body. Within moments Morbius was transformed into a being resembling in many respects a supernatural vampire. He now had superhuman strength, fangs, and an animalistic lust for blood to replace the dissolving blood cells in his body.

Driven by his vampiric needs without being able to control himself, he attacked Nikos and killed him by strangulation. He was about to drain Niko’s blood but the shock of seeing his friend dead by his hands caused Morbius to revert to his true personality.

Morbius tried to commit suicide by throwing himself into the sea. But Morbius’s fear of death then took hold of him and forced him to the surface, and by that time he was wholly in the grip of his vampiric urges.

Morbius led a nightmarish existence over the following years. He attacked numerous victims for their blood during that time, and killed many of them. When his need for blood was satisfied, his normal personality would fully return, and he would be racked by feelings of quilt. Morbius desperately sought a cure for himself, but all of his attempts to discover one failed.

Moreover, no matter how firmly he vowed never to attack or kill another victim, his vampiric drives sooner or later inevitably overwhelm him. They submerged his normal, humane personality and turned him into a ruthless, animalistic killer.

In the course of his vampiric career Morbius battled Spider-man several times. Finally, Morbius encountered and fought Spider-Man at a mansion at Southampton, Long Island, New York. Atop the mansion’s tower, Morbius had bitten Spider-Man and was beginning to drain his radioactive blood when he was hit by a bolt of lighting.

Either because of the lighting, Spider-Man’s unusual radioactive blood, or both, Morbius lost his pseudo-vampiric powers and regained his human form. However, Morbius retained his fangs. Although he no longer required the blood of others to survive, and had been cured of his original degenerative blood disease, he still suffered from a compulsion to attack others and drain their blood.

This compulsion was not psychological but physical in nature, and resembled a drug addiction.

Morbius found work in neuroradiology at the University of California at Los Angeles. There he synthesized a serum which he believed would cure him of his compulsion for blood.

Unfortunately, Jennifer Walters, the She-Hulk was then suffering from a degenerative disease. Not only did it lead to her growing inability to control her transformations into the She-Hulk, but it also was causing a cellular breakdown that would eventually kill her.

Morbius let Walters take the serum instead, and it not only cured her disease, but gave her complete control of her transformations.

In gratitude, Walters acted as Morbius’s attorney when he was on trial for his murders during the time he was a pseudo-vampire. Walters proved to the court that as a pseudo-vampire, Morbius had been unable to control his compulsion to kill for blood.

The jury found Morbius guilty only of involuntary manslaughter, but the judge nevertheless sentenced Morbius to serve three to five years in prison. However, the judge suspended the sentence until Morbius could synthesize another serum and completely cure himself.

Morbius is a “living vampire”, a living man afflicted with a condition akin to that of true vampires. He’s horribly tortured by his terrible cravings, and is a truly cursed man. He tries his desperate best to save and cure others, but most of the time he’s possessed by animal instincts to kill and feed, as well as an animalistic rage and cunning.

On many occasions Morbius attempted to make amends by battling greater evils than he. This regularly led him into a strange, sinister world of demon cults and otherworldly entities. Ironically, this made the living, non-supernatural vampire a part of the occult scene.

Many things about Morbius scream “bat-foe”. In the DCU, his condition would probably be related to the serum used on Vincent Velcro, the vampire in the Creature Commando.

At this stage, Morbius’ bite can create other pseudo-vampires – people afflicted with the same condition as he. Thankfully, Morbius is very wary about this, and has developed a serum that will prevent or even reverse the transformation. Still, accidents happen.

An average pseudo-vampire will have the same stats as before, but with DEX 05 STR 06 BODY 06 and one more AP of INF. They will gain the following Powers: Claws (bite): 06, Damage capacity (physical): 02, Jumping: 01, Regeneration: 05, Ultra-vision: 02 as well as the following Skills : Charisma (intimidation, interrogation): 05, Thief (stealth): 05.

Most will have the same Drawbacks as Morbius himself. 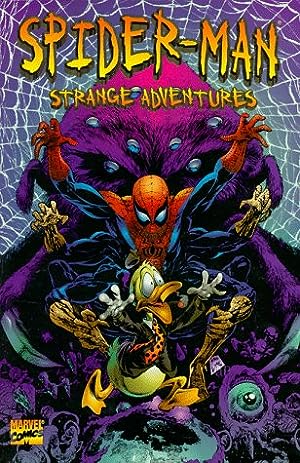 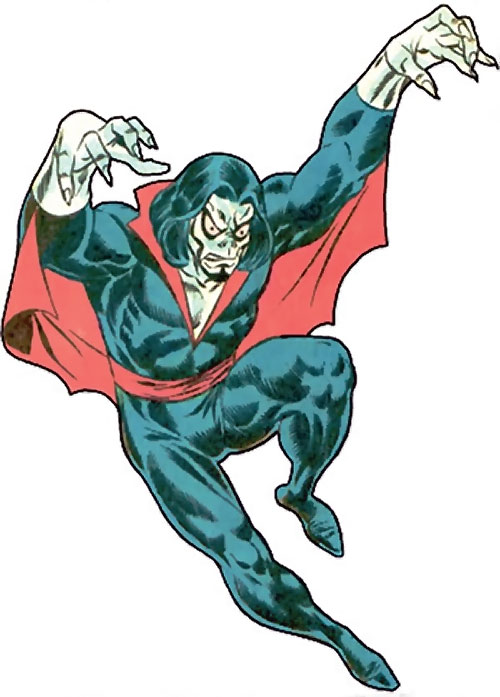 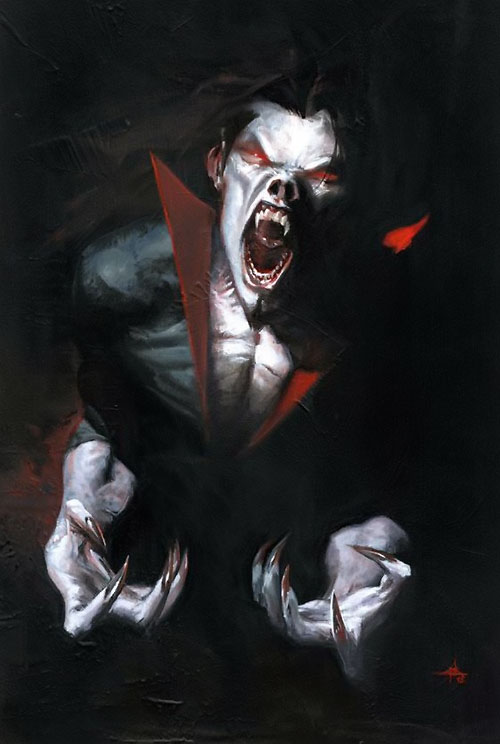