Morbius is often called a Living Vampire. That is, he has an array of vampire-like abilities but is not an undead. His main asset are his predator-like strength, speed and savagery. He is a fast, ferocious and intimidating fighter of great tenacity, and has claws and fangs.

He also had vampire-like regenerative and mesmerization abilities, as well as the ability to psionically  glide on air currents.

Morbius’ body is a supple as a rodent’s, and he can fit in very small crawlspaces.

Michael Morbius was a Nobel prize winning scientist who was dying from a blood disease. By accident, he discovered a possible cure to his terminal disease. However, this turned him into a vampire-like superhuman with an unnatural craving for human blood.

Morbius tried to kill himself, but couldn’t. He lived in a nightmare for years, alternating between fully vampiric periods and more controlled remissions. He tried many cures that didn’t work. He also had quite a few strange adventures, most of those involving Spider-Man’s attempts to stop him.

Finally, he was cured during a fight with Spider-Man. He even managed to cure his addiction to blood, and was judged innocent of all his crimes during a trial.

This remission lasted for but a few years. Morbius relapsed, and witnessed the resurgence of true vampires along with Doctor Strange. He then had one more fight in the sewers with Spider-Man, and underwent one more attempt at treatment. However, this attempt was sabotaged with the inclusion of demon blood, normally a powerful toxin, into the serum intended to cure Morbius.

He mutated into a slightly more powerful form, but found his hunger for blood stronger than ever. Still under the emotional trauma of having just seen his fiancée killed by Lilith’s men, Morbius was confronted by the Ghost Rider. He then swore  : “If I must drink blood, let it be the blood of the corrupt, of those who deserved to die. The blood of the guilty.”

Morbius then started to act has a quasi-supernatural vigilante in the streets of Gotham… err, New York City.

Morbius is a “living vampire”, a living man afflicted with a condition akin to that of true vampires. Once a classic Spider-Man foe, he was part of the horror characters revival at Marvel in the early 90’s. This is when he became an horrific street-level vigilante. 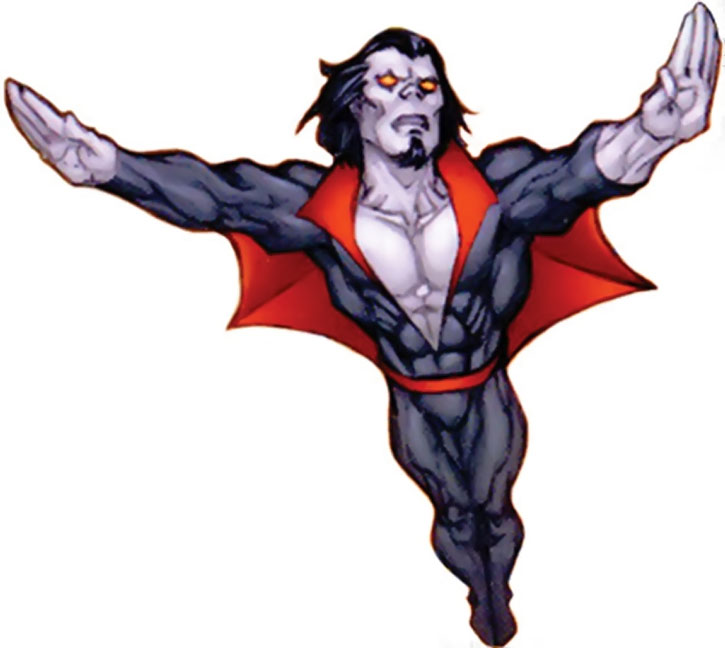 Morbius is a super-predator.He actively seeks out the most depraved criminals in order to slaughter them and drink their blood. While wracked with guilt, he truly enjoys his power and ability to scare the hell out of most people, but would never admit it, even to himself. He may even be unconsciously sabotaging his attempts at finding a cure to his condition.

He is ruthless, intelligent and somewhat overconfident. He also has a slight taste for the goth mood, but from a thirtysomething man’s perspective.

As Morbius the Living Vampire he has (in DC Heroes RPG terms) a Strange Appearance ; when behaving normally and dressed normally as Dr Morbius he has a Distinct Appearance. His look as Dr Morbius is illustrated last (combed hair, no rictus on face, and the reddish eyes and pale skin are closer to an albinos than a vampire).

Morbius is clad in black leather from neck to toes. He wears some kind of stylish leather jumpsuit with a few metal ornaments and fingerless gloves. His clothes include two ragged purple “wings” hanging from his shoulders, that act a bit like a cape.

Morbius has a completely white skin, with vampiric fangs, a deformed face evoking that of a human bat, and his nails are claws. His eyes are similar to Lobo’s. He has dishevelled black hair, and is very good at crouching, hissing and displaying animalistic aggressively. He has a deep, threatening and slightly non-human voice and makes disgusting noises when drinking blood.

Morbius is a natural match for Batman, since he is bat-based, nocturnal and kills as a matter of course. The New York in which he lives is even drawn mostly like Gotham. 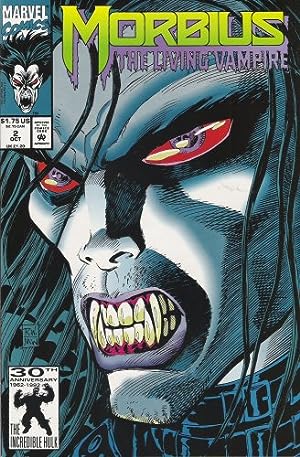 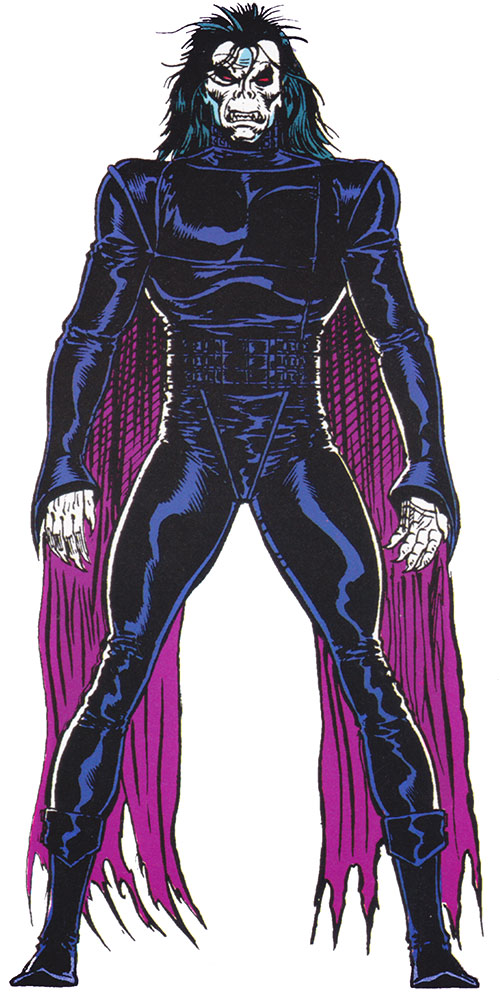 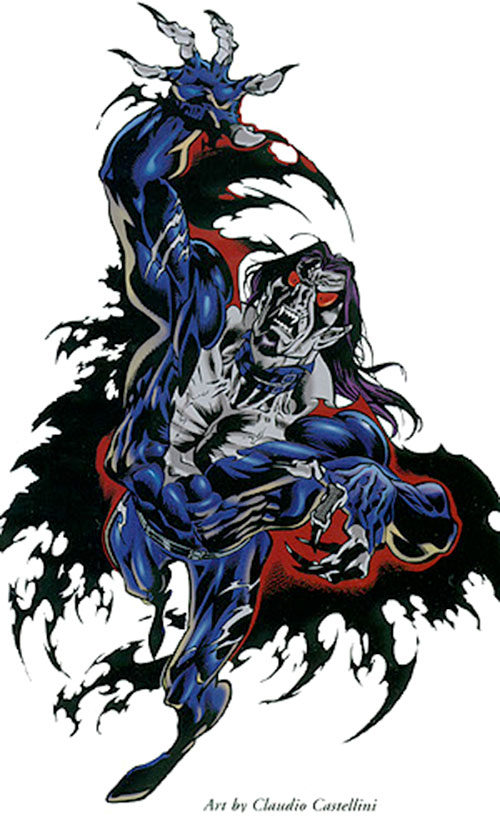 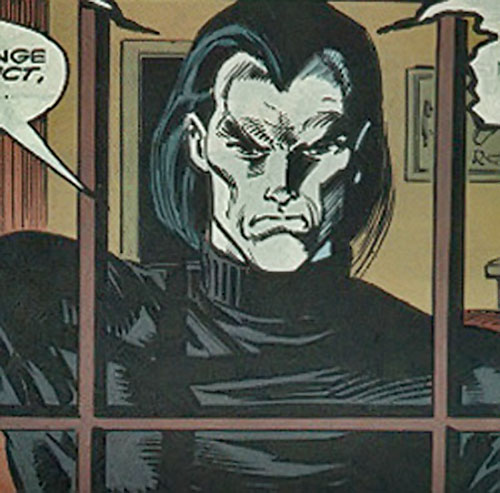 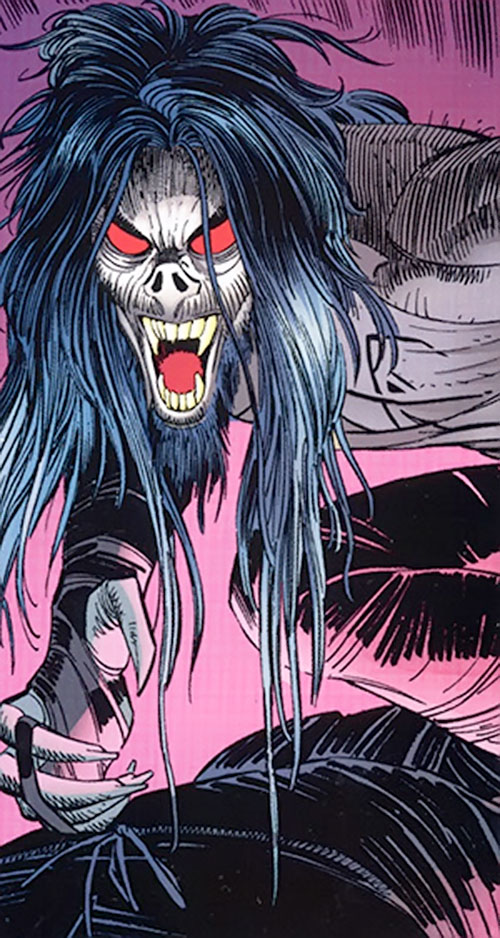 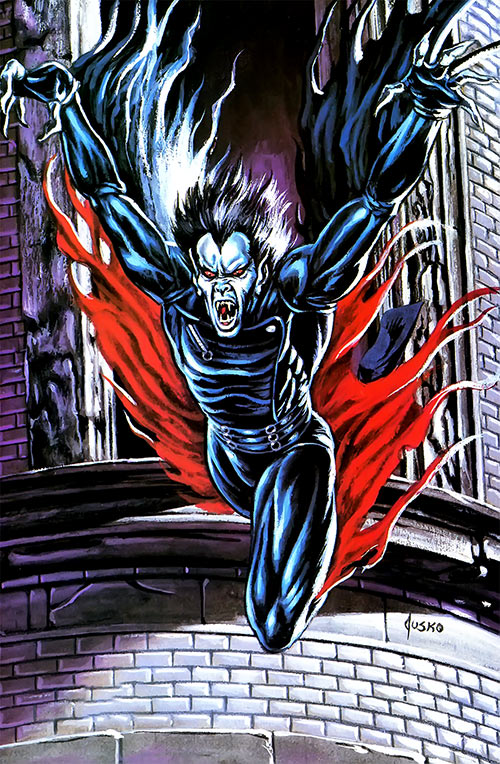