Mordecai is a veteran mercenary, shady doer of shady things, assassin, and ne’er-do-well.

He has survived many dire circumstances, and excels at staying collected and resourceful. Any terrible situation he’s in, he’s probably been in many times before.

Mordecai can use New-You digistruction/resurrection/cloning stations without hindrance. He also has a special pass to use the Catch-A-Ride vehicular digistruction stations.

His most notable talent is his marksmanship. Mordecai is a top-tier deadshot and sniper. He also knows a lot about ballistics and precision weaponry. 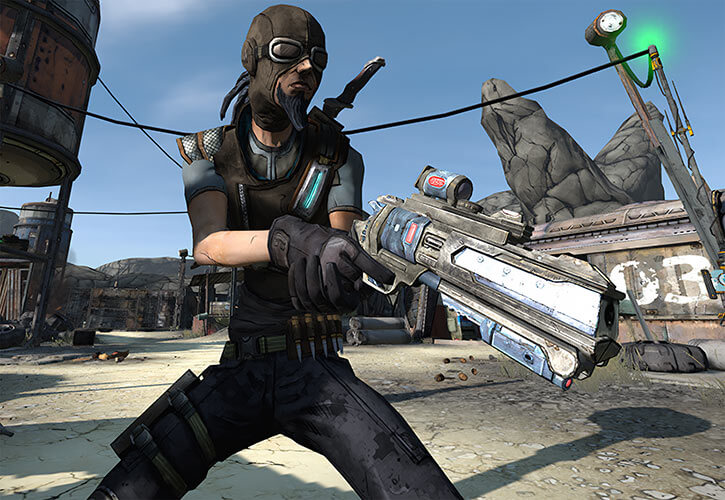 (This section is a made-up rationalisation for one of Mordecai’s signature skills).

Mordecai always wears high-tech goggles. These do some luminosity correction, bright light protection and image sharpening. These are minor but convenient assets.

However, there’s also software that analyses and highlights weaknesses in orb shields. Where Mordecai found this is unrevealed, and it seems to be an abandoned prototype.

Shooting weak spots in orb shields is difficult bullet placement. For most people in most situations, just blasting at the shield to deplete it is far more reliable.

But Mordecai can do bullet placement in his sleep. He enjoys shooting at the small, fleeting chinks in enemy shields.

Therefore, Mordecai can in practice ignore orb shields. This is a sizeable advantage, especially against some enemies such as Eridian Guardians. It also allows him to use fire and corrosive weaponry with much lessened downsides. 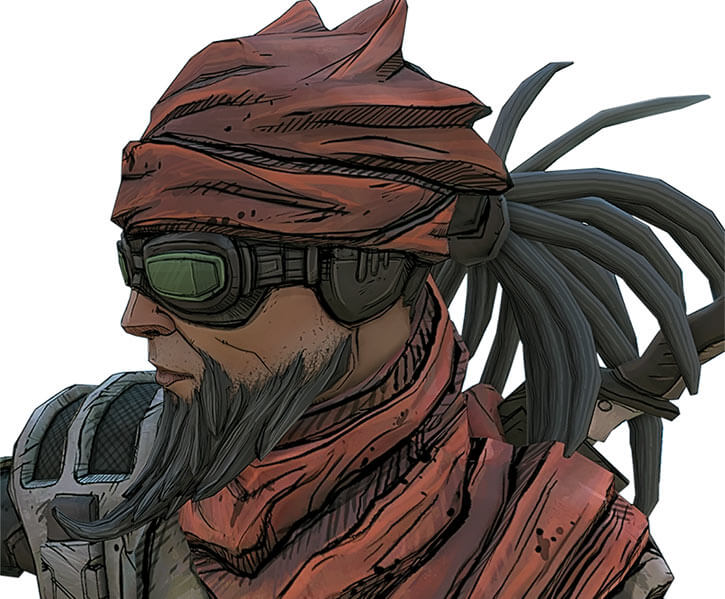 (This describes one possible take on a revolver-first Mordecai. Since that’s what I played. Though in BL2 he seems to have more of a sniper-first build).

At most ranges, Mordecai uses his accurized, scoped Anaconda revolvers. These are large-bore Dahl handguns meant for hunting huge alien beasts. The round has ballistics not unlike some rifle rounds’.

Mordecai has a brace of Anacondas. An incendiary one called AMOR and a corrosive one called ODIO.

At long range, he switches to his Atlas Cyclops bolt-action sniper rifle. This is a high-end model with exceptional ballistics.

His backup weapon is a Vladof Rebel machine pistol. He uses this when cornered, to shoot a lot of bullets very fast.

And of course, there’s Bloodwing. 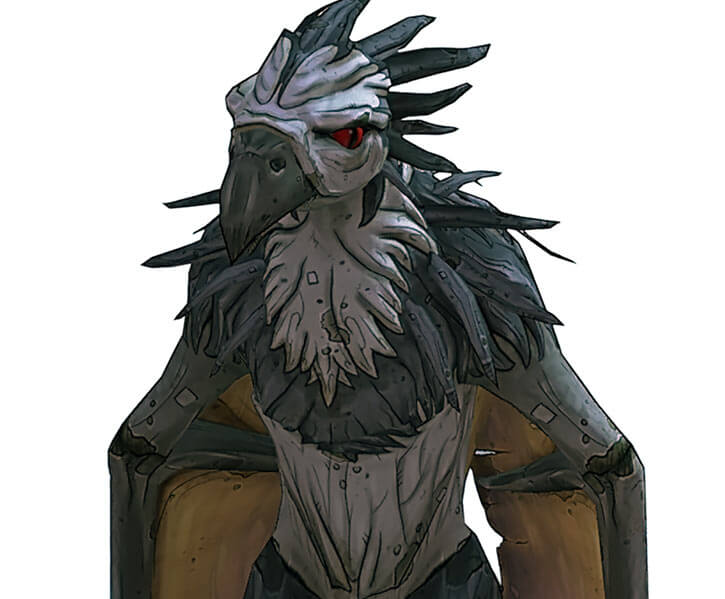 His treasured pet is an alien monstrosity. It looks sort of like a large falcon or small eagle, but with gigantic legs and talons.

Bloodwing’s species seems to have been hunted to near-extinction for safety reasons. Because these things can decapitate a man through a military helmet, or shear right through an arm.

Mordecai competently cares for and trains Bloodwing. This is presumably a rare skill.

Mordecai will usually have Bloodwing starts swooping passes as the enemy closes in. He also electrified the beast’s talons using wiring and Eridian tech capacitors.

Bloodwing dives as fast as an eagle, seldom if ever misses, and is extremely hard to hit.

(Bloodwing is male in BL1 and female in BL2. It might be a continuity mistake, or alien physiological cycles.)

In BL1, Bloodwing has some odd luck-based skills such as Swipe  and Ransack  . Plus a hard-to-explain ability to heal Mordecai with its attacks.

One possible, generous way to translate this to a TTRPG context is that Bloodwing has probability manipulation powers. Not powerful ones, but enough to hinder enemies, have Mordecai frequently find medical supplies in unlikely places, and other approximations of what it does in Borderlands.

This is more open-ended than what’s in BL1, since this is a TTRPG. But it’s limited to what a raptor could understand. So Bloodwing would not get the concept of a slot machine… unless maybe the desired icons on the slot machine’s reels look like prey.

This hypothetical psionicPsionics are sci-fi style psychic powers ability may be an Eridian-energy-based mutation. This would help explain the result of the slag experiments conducted on the raptor in BL2.

It feels like a good point to have some Mexican gothic metal, no ?

Digging around the Encylopaedia Metallum  led to an obscure Mexico City indie band called Fractalia. Not a high-budget sound, but it’s nice.

Mordecai was a sharpshooter and a hunter even as a teenager. Fittingly, he’s from a planet called Artemis.

When he was 17 he reportedly won a marksmanship tournament. That was despite bringing a revolver to a rifle-shooting event. Tempers flared and things went ugly. One surmises that he has been on the run ever since.

After meeting his best and closest friend — an alien raptor named Bloodwing — Mordecai ended up on Pandora. This forsaken planet was halfway between a garbage dump and a wasteland.

After the Destroyer was slain, Mord became close to Mad Moxxi. He entered her big Underdome death matches championship and won.

A relationship with Moxxi ensued, but she eventually dumped him as he was too dysfunctional.

Nevertheless, he remained a Crimson Raiders asset. It was just that most of his work was intelligence of a sort, learning about Hyperion operations in shady bars.

Mordecai later returned to the field, to provide fire support for a new generation of Vault Hunters. The two main operations were : 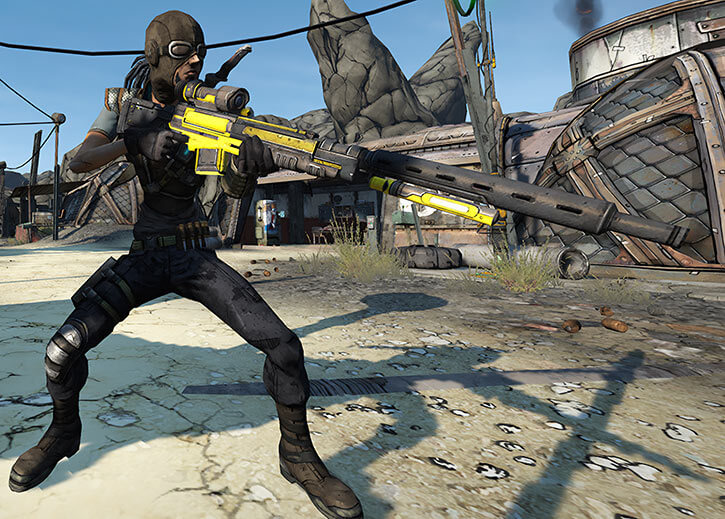 At the Preserve, Mordecai was caught whilst doing recon. He escaped, but Bloodwing was captured whilst buying him time.

Bloodwing was thus forced to attack the Vault Hunters. Though it was narrowly recaptured, Jack then cruelly killed the raptor via an explosive collar.

This loss worsened Mord’s alcoholism. But it also spurred him to take a more active role in the Crimson Raiders, which ended up lowering his booze consumption.

After Roland was killed and Lilith captured, Mordecai was the de facto commander of the Raiders.

During the last-ditch attempt to destroy the Warrior, Mordecai and Brick launched a spectacular attack to thin out Hyperion forces. They commandeered an anti-gravity barge to storm Hero’s Pass, and did a fine job of it.

Their barge was destroyed by an orbital shell, and plunged into lava far below. But both men survived – likely because Mordecai had seen the shell coming.

After Handsome Jack was slain, Lilith succeeded Roland as Commander. Meanwhile, Mordecai got back on the wagon.

A key reason why he managed to go dry was that he somehow procured a hatchling of the same species as Bloodwing. Mordecai needed a clear mind to raise and train the winged monster. 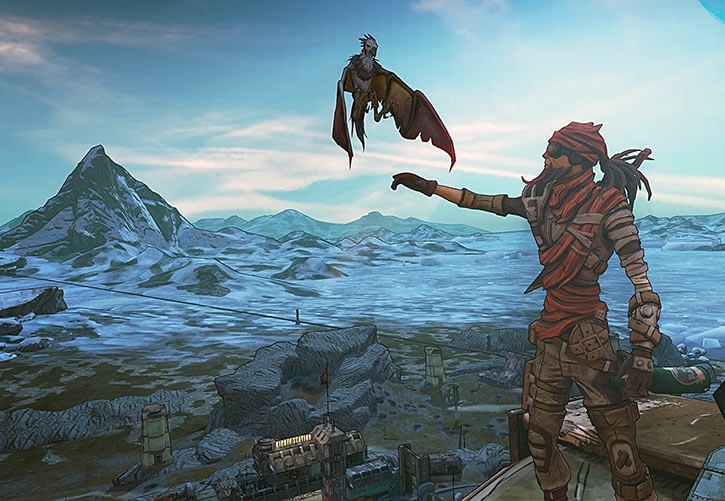 A rake-thin, tall Latino with a goatee and locs. The locs are originally done in a queue, but he later lets them grow bigger.

In BL1, Mordecai wears a strange leather headgear, not unlike a WWI pilot’s cowl. In-universe, it evokes a design used by Truxican luchadores.

Later on, he switches to a pair of big goggles and a bandana – presumably to accommodate his locs.

Though it’s not depicted in-game, Bloodwing is presumably perched on Mordecai’s shoulder. When it’s not circling overhead.

Mord has a light Mexican accent. But unlike Salvador he seldom uses Spanish in his speech.

Mordecai is voiced by Julio Cedillo  in BL1, and Jason Liebrecht  in the other games. 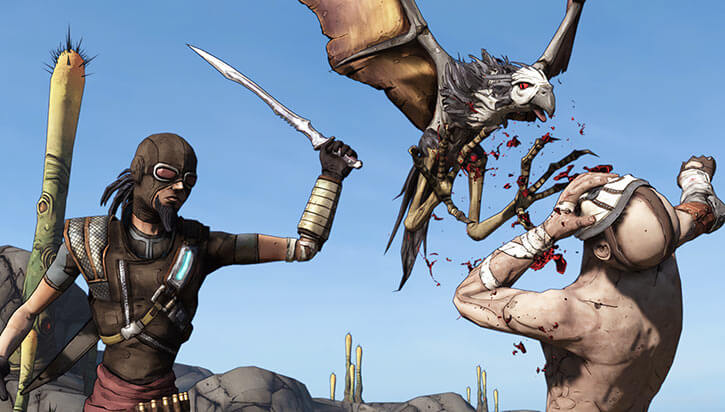 Voice clips from Mordecai in BL games, if you want to get a quick sense of how he sounds.

Mordecai isn’t unlike a bird of prey himself. He’s chiefly a loner, watching pitilessly from high up and waiting to kill from out of the blue.

He loves hunting and slaying. Any prey will do as long as it’s challenging.

He’s a lost and dysfunctional man, searching for something he cannot articulate. Mordecai has issues of alcoholism, anorexia and depression. He’s also bad at relating to people, and overcompensates by being extremely invested in Bloodwing. And, to a lesser extent, precision firearms.

Though they all have poor people skills, the four original Vault Hunters have bonded pretty well. They’re loyal friends, and comfortable with each other. When he’s with his friends Mordecai sometimes makes wry, dry jokes.

“Another trophy for my wall.”

(Standing over the corpse of a huge beast he just killed) “So big. So angry. So dead.” 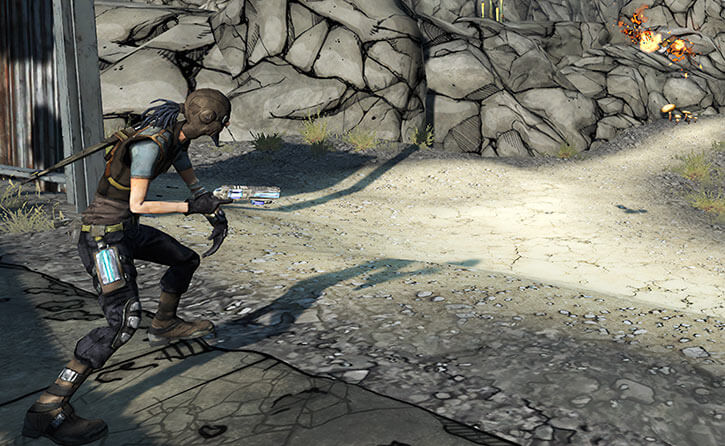 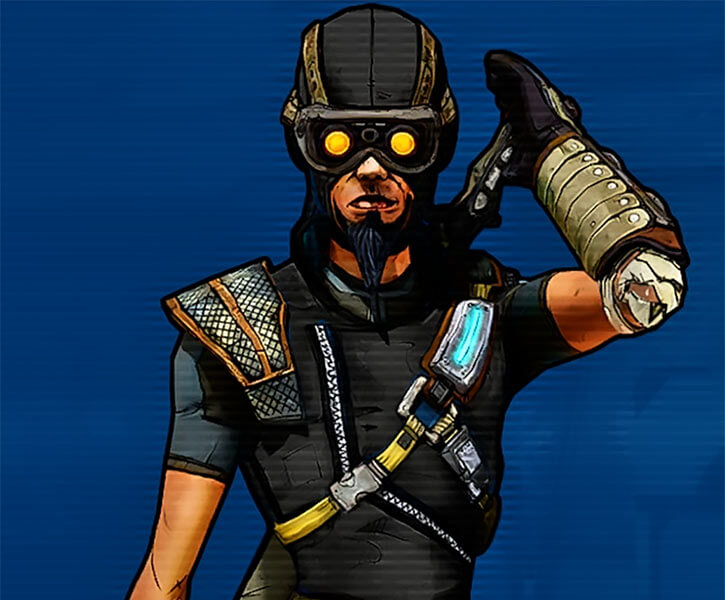 There isn’t much to say about the legendary weapons I picked for Mord during my playthrough. They just have high in-game stats.