Morgana is a woman of unusual stature. Not only is she extremely strong, but she’s also very fast and an excellent combatant, able to fight even the highly-trained depowered Wonder Woman. These assets may not be natural – perhaps her father was not human.

Based on Arthurian precedent one wonders if her sire may not have been Satan, though this is a complete No-Prize Hypothesis .

Her main asset, however, is her sorcery. She can teleport at a whim, and seems fond of animating objects and having people act in crazy ways around her. Wherever Morgana goes, things get pretty weird – either in a festive, uninhibited way or in a dangerous, destructive way depending on her mood.

If attacked, Morgana tends to use her mystical abilities as a second choice. Her first choice will likely be to enjoy a good brawl, especially against another woman. Howbeit, she will often send her familiar to test the worth of an opponent before she goes for the fisticuffs.

Morgana is reputed to be the daughter of Morgan le Fay. Morgana is such a powerful sorceress that mighty Merlin and Arthur couldn’t best her, and even her mother was afraid of her.

She was banished to another dimension under unknown circumstances – or perhaps she just left and didn’t want, or somehow couldn’t, return.

In early 1970, she was accidentally conjured by 4 American teenagers messing with a thrift store occult tome. Morgana swiftly proceeded to turn the boy into a talking frog before teleporting away. The girls knew Diana Prince’s new sales assistant, and eventually the case, narrated by the boy-turned-frog, ended up in Diana’s hands.

Morgana had teleported into a nearby part of Manhattan, and Diana, Ching and the girls soon ran into her. Diana kept charging headlong to take Morgana down, but she proved tougher and craftier than expected.

Eventually she tired of Diana’s interference and prepared to use her magic, but Ching counterspelled her. She got into a brawl with Ms. Prince, and more or less defeated her – then teleported away, without de-hexing the young man turned into a frog.

The traditional method of having his girlfriend kiss him, however, was later successfully tried.

The witch is back

Morgana was seen again when Supergirl asked for Diana’s help in defeating the magician Zond. Supergirl drew the incantation once used by Henry, the teenager formerly turned into a frog, from his mind. Diana then recited it, bringing Morgana back to Earth.

At first Morgana was incensed to see Diana, but when the crafty Amazon mentioned that Zond might be more powerful than Morgana, the witch immediately decided to prove this wasn’t so.

Diana further bribed the giant witch by modernizing her medieval outfit using clothes from her boutique, with the final choices being a black minidress and a designer hat.

After the three women located Zond, Morgana promptly steamrolled him. She even felt in a nice enough mood to cast a spell soothing the trauma of a young woman who had been captured by Zond’s demon-worshipping cult.

The witch then departed with Zond – whom she revealed was actually the former stable hand of Morgane Le Fay, who had stolen a grimoire centuries ago.

Morgana never appeared again. Though she apparently had a series of her own scheduled, it was one of the many victims of the DC Implosion  .

The last illustration is the Diana Prince-provided makeover.

Morgana is manic-depressive, with her mood going up or down in a somewhat unpredictable manner. When she feels up, she loves music and feasts, and will have everybody throw a sort of chaotic block party. Anybody who can play an instrument will do so, and people will loot nearby stores to give her literal tons of gifts.

She will have a medieval theme going. For instance, she at one point triggered a jousting tournaments with people riding into convertible cars and lancing at each other with makeshift poles. She seems to like furry animals, and once whimsically animated dozens of stuffed animals, pretending that she was setting them free.

When she feels down, however, things will become scary and aggressive, with everything turning hostile through heavy use of Object Animation. She is also liable to start broadcasting fear and loathing (Broadcast Empath via Sorcery). Morgana can wreak remarkable devastation through a combination of animated objects and having everybody act crazed.

When she’s in a foul mood, she will also pettily force people to do humiliating things, such as giving all of their money to strangers, brawling among themselves over the love of the ugliest woman to be found nearby, etc.

Morgana is very proud, and behaves like a queen in exile. She considers herself to be above anything that is not a major mystical entity, and people are either her servants or annoyances. She’s so proud that she’ll fall for any challenge to her abilities hook, line and sinker.

She hates the merest allusion to the idea that another magician might be more powerful than she is, and will jump at the chance to prove that nobody is more mystically magnificent than Morgana.

Her mood swings are rapid. She can go from one extreme to another with very little provocation. The results of an attack on her person are unpredictable – it may amuse her and have her step up the festivities, or anger her and have her become bad.

She will remain in an excellent mood for several hours whenever she gets to prove how powerful she is, though.

“By the blood of the sacred Tetragrammaton ! What manner of place is this ? And what manner of fool dare conjure up Morgana ?”

“By the britches of Beelzebub !”

“Frimost, discourage that foolish impetuous girl from interfering with my pleasures !”

“By the flames of Banaal ! You take too much upon yourself ! Now you shall feel the power of my wrath !”

Diana Prince : “We need your help against a magician whom even Supergirl is powerless against ! A magician so powerful, that maybe even you can’t beat him —”
Morgana : “*I* can’t beat him ? Why you — I ought to — what is this amateur’s name ? Lead me to him — I’ll soon make short work of that charlatan !”

Drawbacks:
SPI (manic-depressive), SIA toward Pride and proving her superiority, Attack Vulnerability (-2CS OV/RV vs. Character Interaction hinging on flattery about her power). 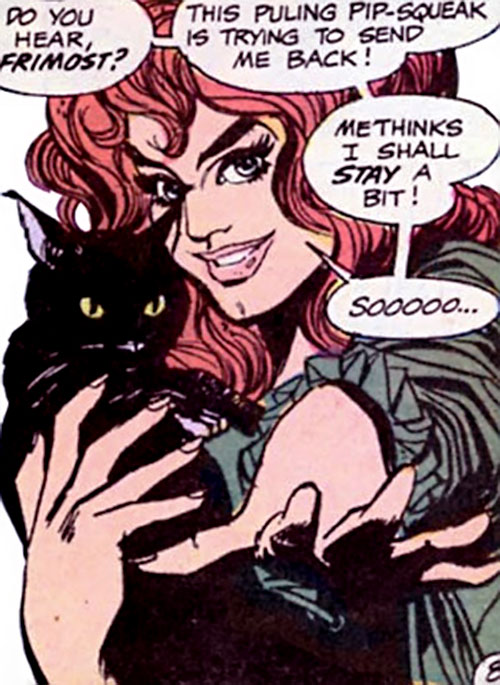 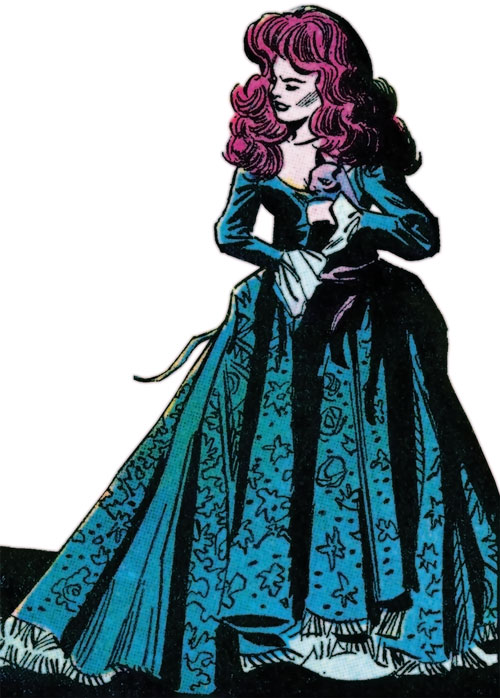 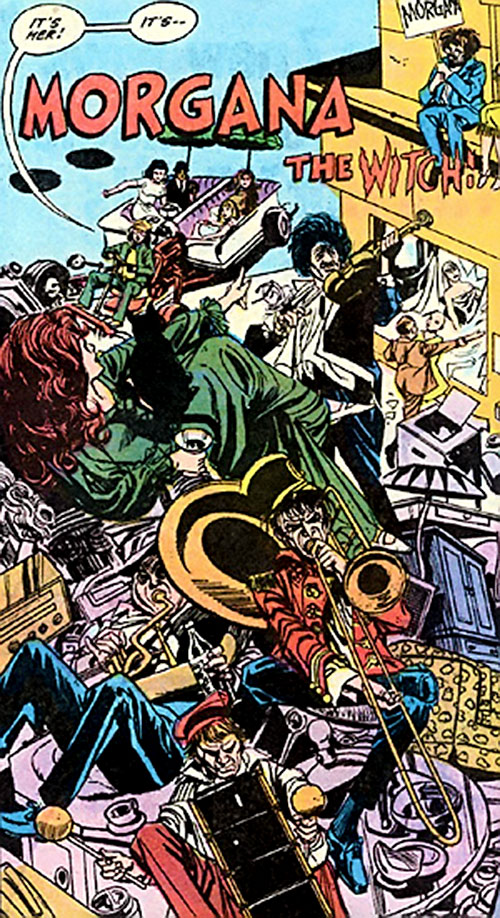