Morningstar can fly. She also can project heat, light and concussive force with tremendous power – enough to stun even the likes of Wonder Man or Jawbreaker.

She seemed quite tough. In fact, she took some serious superhuman blows without being taken out, including assault from USAgent and Wonder Man.

It is likely, but not demonstrated, that she is resilient to heat and flame. And perhaps bright lights and cold.

A geologist, Marya Meshkov was exposed to strange glowing fragments while unearthing new debris from the 1908 Tunguska explosion . Over time, she developed radiant superhuman powers.

Eventually, she joined the Bogatyri, a group of superhuman Soviet hardliners like herself. When the USSR fell, the Bogatyri decided to continue to fight for the Soviet dream.

Their first known operation, in the early 1990s, was a strike against an isolated Canadian Early Warning outpost. They successfully took out the troops, and proceeded to finish building a secret weapon hosted there, the Quick-Freeze Crystal. They intended to overdrive the weapon, and hopefully trigger a new Ice Age all over North America.

The operation ran afoul of a trekking Wolverine. But Morningstar blinded him long enough for her comrade Svyatogor to flatten him. Wolverine was rescued by a small contingent of West Coast Avengers, but all of the Westerners were forced to retreat by the post-Soviets.

However, Canadian and US forces then attacked. This allowed the small group of WCAs and Wolverine to neutralize the Crystal and rout the Bogatyri. Morningstar and her comrades successfully escaped.

The remainder of the Bogatyri apparently decided to let go of the Cold War. However, Morningstar would have none of it. She split from the group, as determined as ever to win her one-woman struggle against Western imperialism. The Cause, however, brought strange alliances.

She was apparently fed a story about how the Avengers, having invaded the sovereign land of Demonica, had once more rammed American power down the thread of a defenseless nation. As a result Morning Star accepted a mission along with Klaw, the Master of Sound, to snatch a Demonican traitor from the hands of the West Coast Avengers and return her to Demonica.

Their sudden assault succeeded, and the unlikely duo returned to Demonica with their target.

Dr. Demonicus, the ruler of Demonica, had just finished a confrontation with the West Coast Avengers. He then revealed in front of the Avengers, Pacific Overlords and his two allies Klaw and Morningstar that he was actually serving the demon Raksasa. Demonicus intended to entreat and free it on the Earth plane pretty soon.

Considering the implications, Morningstar struck a deal with USAgent and turned against Demonicus.

Seizing the means of invasion

She returned to Demonicus pretending she had incinerated the American. Morningstar then worked oon convincing Klaw to turn against Demonicus too. But the hot-headed USAgent attacked too soon, attempting to stop Demonicus’s ritual.

Morningstar and the USAgent fought against the Overlords. They were soon joined by Klaw, who had been convinced by Morningstar. The teamwork between Morningstar and USAgent allowed them to stop Demonicus. This resulted in the destruction and sinking of Demonica.

Morningstar refused to compromise by allowing the Avengers to fly her to the coast. She left by flying under her own power, though she gave USAgent a big surprise French kiss before departing.

Her costume is presumably meant as psychological warfare and distraction against capitalist running dogs and other craven exploiters of the proletariat.

If so, it’s working.

Morningstar is a tough fighter with a mean streak, fighting for a cause long lost. She behaves like a highly resolute soldier who will never let go and never surrender. Meshkov refuses any compromise with the hated decadent West. She will not hesitate to fight dirty to secure victory for the Cause.

In a fight she tends to fly to stay mobile and blast opponents, but she can be somewhat unpredictable. Usually she fights with a clear head and solid strategy, but sometimes her temper gets the better of her.

Although that may be hard for Americans to notice as she’s busy burning them to a crisp, she’s actually quite heroic and pretty much Lawful Good . It’s just she perceives NATO forces as among the evils she must fight.

For instance he turned against Demonicus the moment she realized his plot was actually nihilistic. It is likely she has conducted crimefighting activities in Russia – especially if they expose corruption in the hated new regime.

Meshkov was very familiar with Wonder Man as an actor and general hunk. She apparently was a fan of the terrible, cheap B-movies Simon Williams appeared in. That did not stop her from attempting to incinerate him on several occasions. Though she at one point considered asking him for an autograph before he would die.

Under all the toughness and aggression, Meshkov apparently does the smoldering sensual Slavic beauty bit with gusto, as the USAgent can attest.

She also tends to speak in a pompous, official-sounding, melodramatic style.

“The motto of the Bogatyri is… the only good American is a dead American !”

“Do not insult us by confusing us with those fools, Scarlet Witch ! We too are here on a lawful mission to take a Demonican citizen back to her homeland.”

Morningstar : “Nothing would delight me more [than fighting you], Agent — but I drove you here so we could have our own private summit conference !”
USAgent : “What ? Then you were missing me on purpose ? What’s the catch ?”
Morningstar : “There is no ’catch-21’, as you Yankees say. I want the two of us to join forces — against Dr. Demonicus !”

“нет ! The West is still *my* enemy, no matter what they say in Moscow.”

“Perhaps we shall meet again, USAgent — under happier circumstances, or even as foes. Until then, fare you well !”

She sooo would be the daughter of Stalnoivolk.

Bonuses and Limitations:
Laser Beam can have the Scattershot bonus if desired (+1). 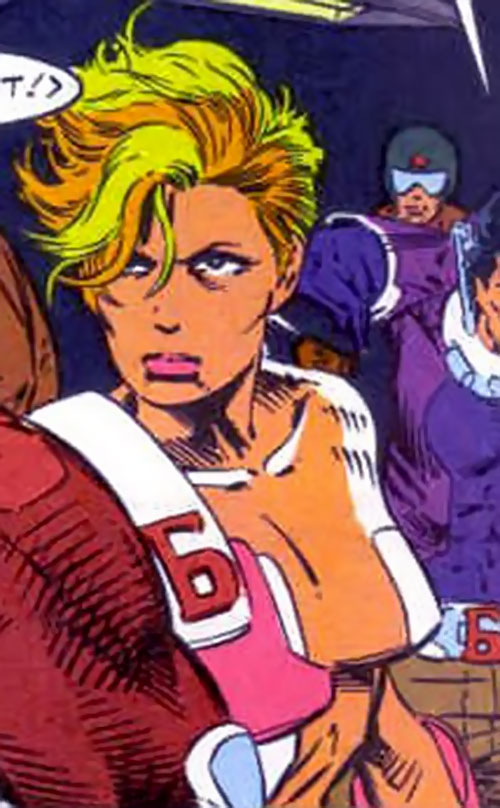