Morph is shape-changer. He can make himself look like pretty much anything, up to and including an elephant. However, this power does not seem to allows to do many *useful* things. The most intricate object he has ever become was a catapult, with no more range than Morph’s strength.

He will sometimes create clubs or chains out of his own body. But in DC Heroes RPG terms, even those are special effects for Growth (to increase his STR or reach).

However, the number of characters he likes to shape himself into is baffling. In just one issue he became :

One should note he didn’t have much screen time in this one.

Morph is a well-trained X-Man. As such, he has broad, useful skills and is quite conversant with technology. He’s an excellent team player and way smarter than he looks.

Morph is from an unknown parallel Earth. All that is known from his past is that he was part of the New Mutants and then graduated to the X-Men. On his world, the X-Men are apparently renowned heroes, as he mentioned meeting the President.

We also know that his mother died when he was 13, due to lung cancer. This caused a rift between him and his father. His father wanted him to become an adult immediately now that his mother was gone. Morph countered by become childish, irreverent and cracking numerous jokes, most of those in bad taste.

Things continued to escalate until Morph became an accomplished clown. He used visual humor (via his powers), jokes, bathroom humour and off-colour comments in an unrelenting barrage. Still, he was considered a capable X-Man.

A scratch in time

During Morph’s career with the X-Men, something apparently went wrong with a part of the timestream. Information propagated that would erase some anomalies but also some timelines .

Thus, in Morph’s timeline, he would be retroactively critically injured as a New Mutant while battling Morlocks. Morph would be unable to ever regain a solid form, being kept in a beaker.

Morph thus became part of a small group of youths from threatened timelines. These were assembled by a halfling-like being called the Time Broker, who explained the situation. He also said that he could send them to alternate timelines to rectify anomalies. That meant that the timeline corrections never would have a reason to start.

While Morph was initially attracted toward Sunfire, he settled on being good friends when she explained him she was gay. Morph’s clownish routines have become an integral part of the team’s life, although they sometimes get in the way of more adult behaviour. 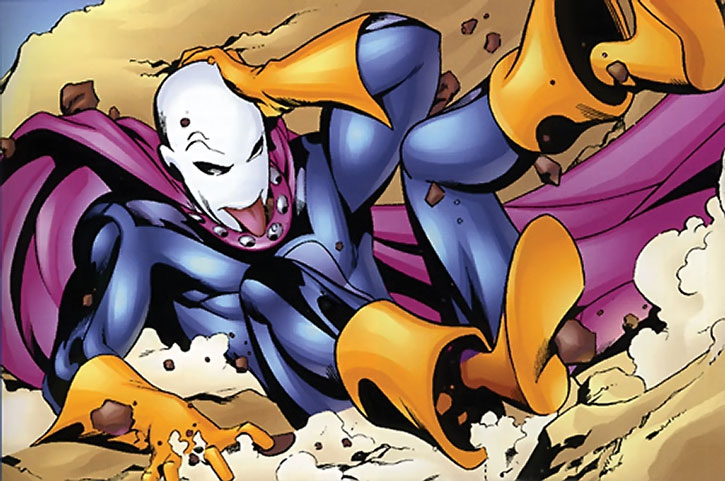 Morph was eventually offered the opportunity to return to his native dimension, having taken the necessary steps to save his reality. But he refused it. Morph had realized his presence was important to the team and did not want to abandon them.

The Timebroker accepted Morph’s decision. He also agreed with Morph not to let the rest of the team know that Morph had declined the chance to go home.

You want the truth ?

Over time, the Exiles’ missions and the Timebroker himself became increasingly irrational. Therefore, the Exiles hatched a plan to access where their missions originated from. They succeeded in entering the Crystal Palace, an extra-dimensional observation post built by an unknown but long-gone people.

An alien race nicknamed the Bugs had found the Crystal Palace. In experimenting with it, they had inadvertently damaged numerous realities. The Exiles had been gathered by the Bugs in hopes of repairing those realities.

To the Exiles’ horror, they discovered the reason for the increasingly ridiculous missions. Some time prior, the Exiles had encountered Weapon X. This was a counterpart to the Exiles composed of anti-heroic and villainous members. Weapon X assigned to “dirty” missions requiring assassinations and other morally questionable tasks.

Weapon X was led by an evil version of Hyperion who died in combat with the Exiles. Like the other fallen Exiles and Weapon Xers, Hyperion’s body was recovered and stored in the Crystal Palace. Unbeknowst to the Bugs, remnants of life lingered in Hyperion’s body. Thus, he eventually regenerated.

Once he had regained his full health, Hyperion broke free of his coffin and took over the Palace. He forced the Bugs to put the Exiles through humiliations and stress as the first part of his revenge upon them. Hyperion seriously injured or killed several Exiles before Beak used the palace to summon two heroic versions of Hyperion. These helped end the evil Hyperion’s menace.

Afterward, the Exiles spoke with the Bugs. They agreed to continue helping them repair the multiverse. However, this time members of the Exiles worked on both ends of the assignments. As advisers in the Crystal Palace, Exiles members relayed information and help much more efficiently than the Bugs ever did.

During one of those later missions the Exiles chased the deadly mutant Proteus through multiple realities. Morph inadvertently lost his protection against Proteus’s mental powers and was possessed by the villain. Unlike Proteus’s other hosts, Morph’s body was able to host Proteus’s mind without harm. This finally provided Proteus with a permanent housing.

Unable to separate Proteus from Morph, the Exiles tricked Proteus into donning a behavior modification device. Proteus had access to all of the memories of those he had possessed, which the device exploited by planting a suggestion that Proteus could only access Morph’s memories. The end result was that Morph was still possessed by Proteus, but Proteus believed himself to be Morph.

Morph continues to work with the Exiles, though the situation remains tense. The other Exiles are concerned that something will eventually restore Proteus’s full memories and unleash his menace upon the multiverse again.

Morph is a motormouth. He constantly makes jokes, blunt comments, purposefully stupid and inappropriate remarks, and the like. He enjoys playing characters, switching between them at great speed and delivering appropriate dialogue to make his point. As he does he adjusts his visuals with great creativity.

He has, or feigns, a thoroughly immature approach to sex. He hits on women in weird, more or less humorous ways and makes various comments about attractive ones, including his teammates. Yashida Mariko once commented that if Morph ever saw one of the girls naked he would be like a six years old after eating three pounds of sugar. She probably was right.

“I may be a complete idiot, but I’m not stupid.”

Advantages:
Insta-Change, Miscellaneous (Morph has no scent — This makes him difficult to track by those with enhanced smell, though the lack of a scent can also make Morph stick out in a crowd to those same people; 5 points).

I assumed than nearly none of the persons encountered in alternate realities has any HPs. 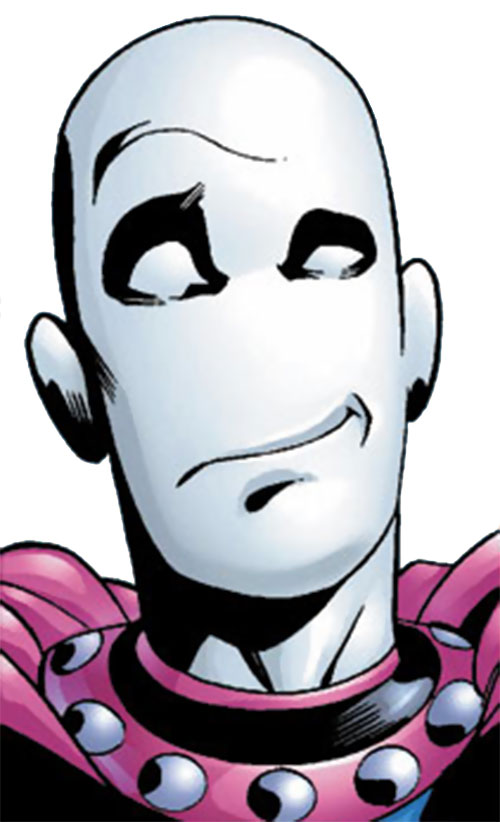 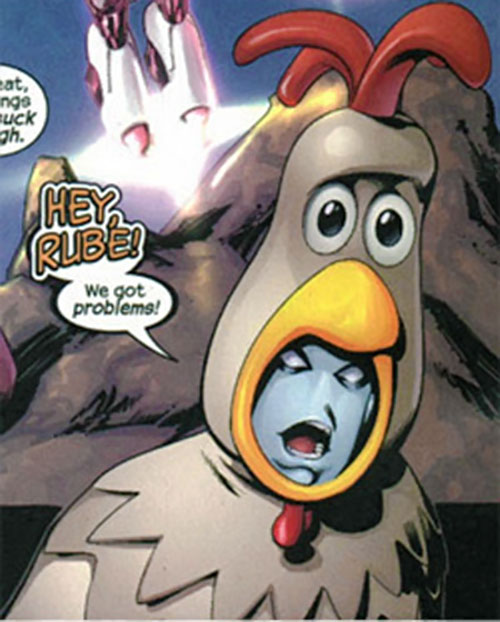