Mortadelo is a master of disguise who can turn almost into anything (from a whale to a shadow, a lamp or a ray of light) while keeping some of the attributes of the impersonated things.

As a secret agent he’s definitely not one of the best. Usually it’s sheer luck (or accumulated fumbling) that prevents the disasters he and his chief Filemón unleash from destroying the city.

When playing Mortadelo, remember they always play at the Humour setting. In DC Heroes RPG terms the Invulnerability and Regeneration Powers are there just for enforcing that. Despite explosions, terrible falls, fatal dismemberings… a new page and everything’s forgotten.

Mortadelo and his chief Filemón fight a constant battle against crime. And this is terrible.

Their department is headed by the super-intendant Vicente. Whether the biologist Dr. Bacterio’s inventions are of any help against injustice is subject of discussion. His crazy inventions cause many painful situations for the heroes, who spend most of their time fixing the disasters they trigger.

It was an infallible hair grower that left Mortadelo completely bald. Way back, before that, he was known as “Mortadelo the Hairy”.

Mortadelo and Filemón work for the T.I.A. secret agency since time immemorial. T.I.A. stands, in Spanish, for Air-and-Earth Investigation Technicians – if the acronym itself is translated Mortadelo and Filemon are the Men from A.U.N.T.. They are both their most successful agents and their most embarrassing ones.

Mortadelo is tall and lean. He wears a black frock coat, a white shirt and a black neck lace. His nose is very big and his head completely bald. He wears glasses since he’s highly nearsighted without them.

Mortadelo (like Filemón) is very lazy and will try to escape dangerous missions as long as he can. When finally put into one will never abandon it… although some strategic retreat when he finally provokes disaster is usually recommended.

While Filemón is usually more serious and “police like. By contrast Mortadelo has a playful and innocent streak.

Without any doubt, Plastic Man and the Giffen Justice League (specially Justice League Europe) should cross their path with Mortadelo and Filemón. They could equally mix well with most DC Humour setting: ’Mazing Man, Captain Carrot, even Ambush Bug.

Sending Superman into their Humor genre would be a typical Mr. Mxyzptlk joke. I once used them when my Spanish DC superhero group were wandering through dimensions, stumbling at so different ones as Cthulhu’s, Asterix’s, a generic D&D, Star Wars’ and Mortadelo’s).

Drawbacks:
Oblivious, Minor Physical Restriction (Near-Sighted), Public Identity, Socially Inept, Ultra-Unluck (50 pt, roll 1d10 to see which roll of the character will fail ; then roll another 1d10 and follow on).

On its early days, Mortadelo and Filemón worked together on their own, as a detective agency. On those early days, none of them had any connection with T.I.A. and both had the Advantages “Confined Headquarters” and “Low Connection (Underworld)”. Mortadelo Powers and Skills were as follow:

On the earliest of those early days Mortadelo wore a tall bowler hat (where he draw out all his disguises from) and an umbrella. He also had Artist: 03 and Gadgetry: 05, but those quickly disappeared. 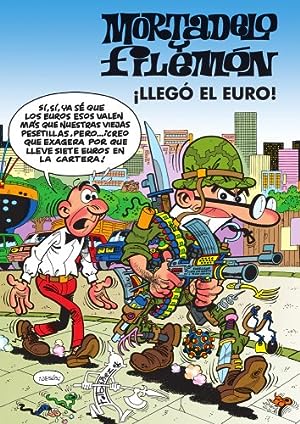