Moss Man is a minor heroic operative in the 1983-1984 Masters of the Universe TV series.

He only appeared in two episodes and did not show up in the She-Ra Princess of Power spin-off.

For more context about the Masters of the Universe, see our setting article for the world of Eternia.

Moss Man is a spy. Able to camouflage himself by changing his form into that of any plant. Then, while transformed he can simply sit and listen to those that go by.

Moss Man also has the incredible power to talk with plants. He can use this to gather information about an area – or who has passed by.

He has been shown stretching his arms. Presumably, he could stretch other parts of his body too. 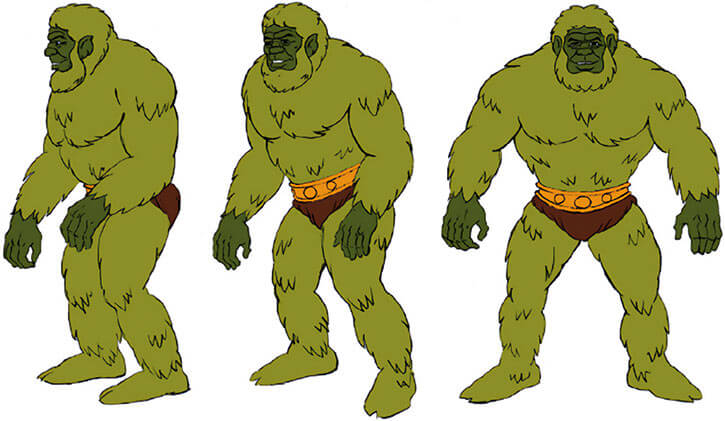 Moss Man, being a peaceful soul, allied himself with King Randor’s kingdom. His ability to transform into plant-life makes him an excellent spy.

Adam asked Moss Man to join Melaktha, the Royal Archaeologist, and himself at the shore one morning. Moss Man was there waiting when they arrived. He was in the form of seaweed.

Search for the island of Avathar

Melaktha explained the legend of the island of Avathar. A powerful ancient empire that controlled much of Eternia. That empire fell when the continent disappeared.

A small island with ancient ruins had been found. These were potentially Avatharian.

The group arrived at a vine-covered ancient wall with hieroglyphs on it. Melaktha was able to read some of them but vines blocked much of it. Moss Man used his power to communicate with plants and asked them to move. They did.

The three found their way underground to an ancient treasure trove. Some ancient moss told Moss Man about an adjacent secret room.

Moss Man slipped between the cracks and opened the room. There they discovered the legendary mirror of Avathar!

Changing from plant to man.

The Ancient Mirror of Avathar

This magic mirror awoke and said it held all the knowledge of the Avathar empire. Overjoyed, Melaktha exclaimed, he would spend the rest of his life studying Avathar with this mirror.

Meanwhile, Trap-Jaw, disguised as a pirate, spied on them. He reported back to Snake Mountain about the “junk” from the island and the mirror.

But Evil-Lyn understood the value of the mirror. It would likely contain the lost spells of Avathar! Two-Bad told Trap-Jaw to bring the mirror back to Snake-Mountain.

Even a small and boring job is important

A young boy, Opie, was learning to run his father’s lighthouse. His dad, Angus, would be home later. Opie got bored and went to play in his room instead of watching the weather reports. A storm swept in. The rotating beacon failed and the ship carrying the mirror ran aground and began to sink!

A hole in the side of the ship let the sea wash Moss Man into the ocean. He-man lifted the ship out of the water, while Moss Man persuaded seaweed to block up the hole in the ship.

Angus and his son held a mirror, reflecting the light back out to sea. He-man tied a rope around his waist and pulled the ship all the way to shore.

At the twins Birthday party. Moss Man is seen chatting up Queen Angella of Etheria.

His entire body is covered in a light-colored moss that resembles fur.

He goes barefoot and unclothed, except for his dark brown shorts and belt.

Moss Man is truly a gentle soul. Extremely humble. I don’t imagine Moss Man would ever purposely hurt anyone.

Though, his speaking with plants sometimes weirds people out. 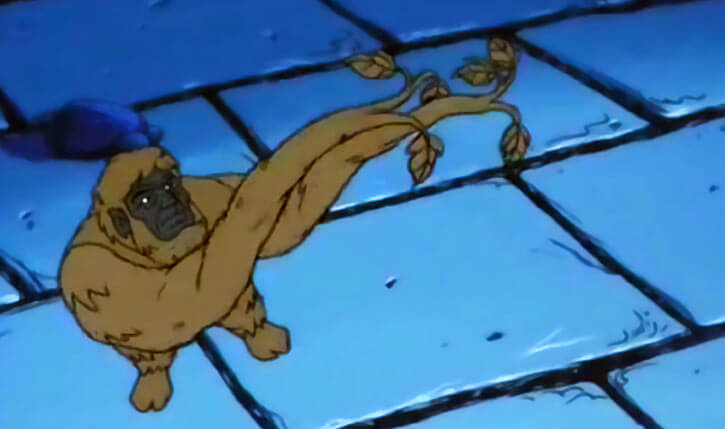 (Man-At-Arms is testing a secret invention.)
Moss Man: “I wasn’t spying. I came out here for a nap. I’ll go find another spot.”
Orko: “Even when he’s not trying to be, Moss Man’s a spy. Being able to change into any plant can sure be handy.”

(A pile of seaweed transforms into Moss Man)
Moss Man: “Ah, good you made it. I got tired and took a nap.”
Melaktha: “That seaweed is Moss Man ?”
Prince Adam: “Yes ! Whenever Moss Man goes to sleep, he changes to whatever plants are nearby. In this case seaweed.”

“Please excuse me. I’m always leaving bits of me everywhere.”

(Melaktha tried to remove large vines from the wall of an ancient ruin)
Moss Man: “Excuse me. I can help.”
Melaktha: “Uh, no offense Moss Man but it’s hard enough to read these symbols without getting your moss on them.”
Prince Adam: “Well, give him a chance Melaktha. I think I know what he has in mind.”
Moss Man: “Good day my friends, would you mind leaving the wall so we might see it ?”
(The vines move off the wall)
Melaktha: “You…talk to them ?”
Moss Man: “Oh, we spoke to each other.”
Melaktha: “Well, what did they say ?”
Moss Man: “They said you pulled them hard.”
Melaktha: “Oh, I’m sorry.” (Looking thoughtfully at the vines)

“Wait! The moss says it might be a trap.”

(Adam lowered a rope so Melaktha and Moss Man could climb out of a pit)
Melaktha: “You go first. You saved my life.”
Moss Man: “No, I think you better go first. I might leave the rope too slippery. Oh, don’t worry, I’ll get up alright.”

“There, now for some help from my seaweed cousins.”

Moss Man would certainly have a connection to The Green. 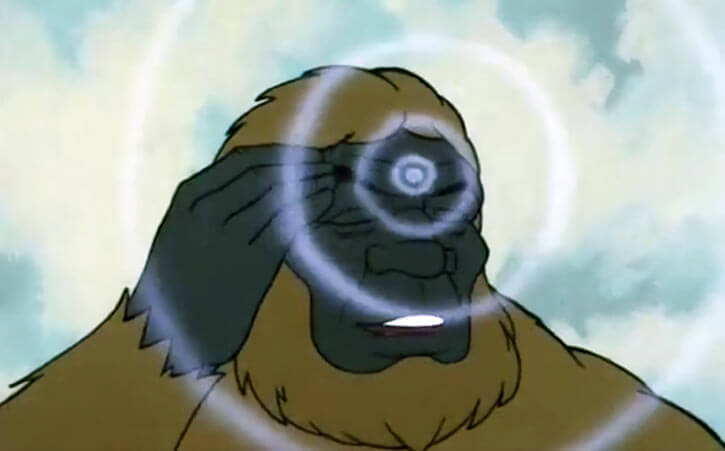 A 511 points Character (without equipment). 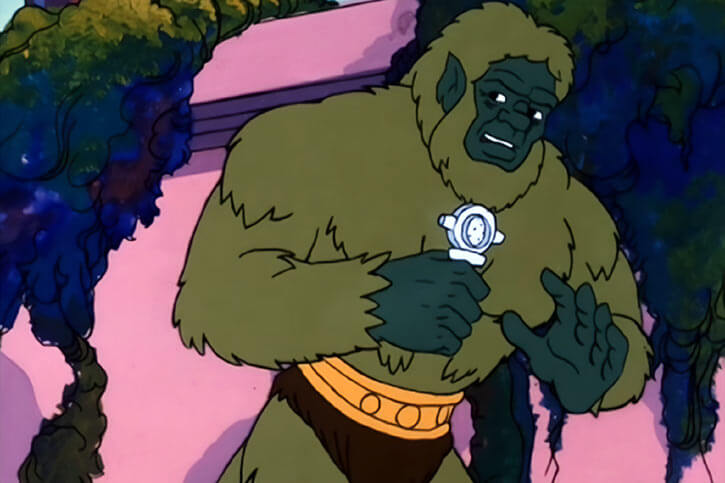 Moss Man it seems is continuously losing moss from his body. Everything he touches ends up with residual moss fragments on it. Ropes he climbs or stairs will become slippery from his use. For the most part, this effect is only a characteristic of him being a plant.

To emphasize the slippery aspect of Moss Man’s movements. Give surfaces a 1 C.S. penalty for OV wherever necessary.

At least twice in his short appearance, Moss Man comments on his own slipperiness. I’ve added a couple of APs of Grappling Immunity.

From his own comments and what he accomplishes, he may have the Powers via emulation of any known plant, if he can come up with ideas. Based on these very short sequences, these Powers would be added to his character sheet, as opposed to performed Power stunts, as he doesn’t seem to spend any Hero Points doing them.

A couple of scenes have Moss Man sending a vine off his body. When it reaches its destination, it coils on itself until Moss Man has moved his entire form from one spot to the other. He then returns to his natural look.

Regeneration was added because he is constantly losing parts of himself. He can use Plant Control to order these parts back to himself.

He might also have the Advantage, No Vital Areas. The only time he could’ve taken damage was from a fall into a pit. The pit might be 40 feet at most. That’s a 04 AP attack and even with Melaktha falling on top of him, he’s unhurt.

Source of Character: The 1983/1984 animated series He-Man and the Masters of the Universe Season Two Volume Two episode “Here, There, Skeletors everywhere” and “The Ancient Mirror of Avathar”, Voiced by Lou Scheimer.