“He’s actually a deadly multi-function machine… built into the shape of a man !”

This robot doesn’t have a name. Its creator, the Mad Thinker, simply states that it’s the most powerful android among his currently active series.

(Though the Thing addressed it as “Charlie”, so I guess we could call it that…)

It appeared in 1968, during the classic Kirby/Lee Fantastic Four run.

Witness the power of my ultimate form !

Oddly enough, this obscure creation went through three different forms over the decades.

These are functionally three different characters. So a small writeup for each form is clearer.

The MPA is a 12-foot (3.66m.) tall armoured combat machine. It is programmed to fight the classic Fantastic Four by itself.

So I wouldn’t call it underequipped. 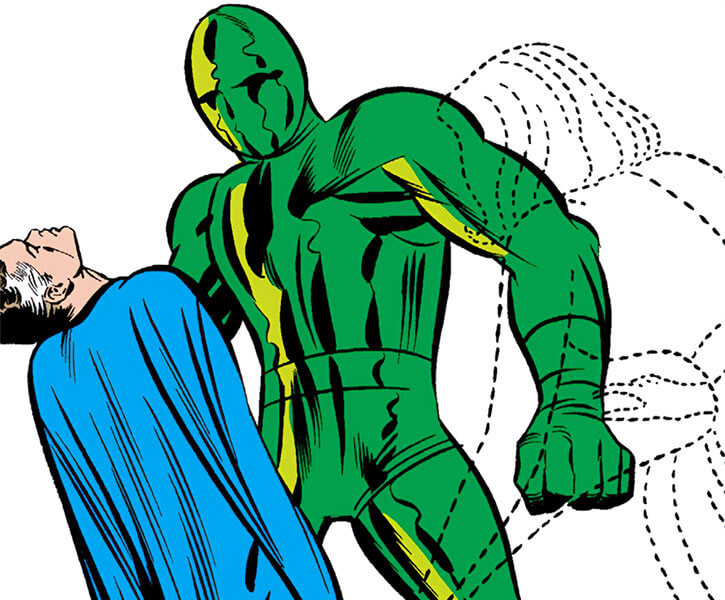 The MPA curbstomped the entire team. In fairness, they were exhausted at that point. But the fight was one-sided enough that the MPA would have decent odds even against the rested FF of 1968.

It stands to reason that the MPA isn’t a robot but a synthesoidAn artificial being built using organic-like tissues, rather than robot-like hardware. The main reasons for this are : 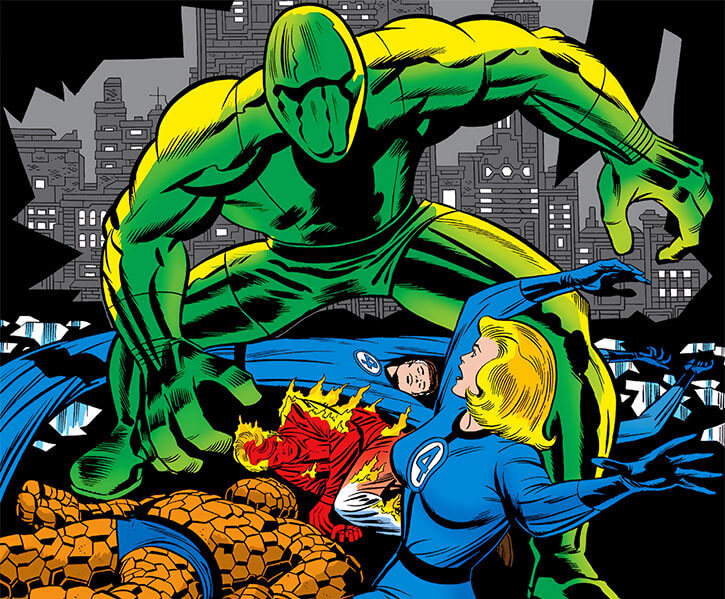 Back in 1967, the Mad Thinker built a batch of green, faceless metallic androids to assist him.

Most weren’t particularly powerful. They were just aides and guards. But one was built to take on the Fantastic Four.

The Thinker’s plan relied on softening the FF by turning the Thing against them. The general plot worked, but the Thinker was arrested.

However, he could still remotely order his last — and most powerful — android to attack the Baxter Building.

This assault worked. But the perennially underestimated Invisible Girl (Susan Storm) stumbled upon a means to revive the boys. Albeit outgunned, the FF held on by the skin of their teeth.

Dr. Richards eventually tripped the MPA, making it stumble through the gateway into the Negative ZoneAnother universe where everything is made of a strange form of antimatter. He then grimly declared the android to be finished… forever !

In the Negative Zone, the MPA went through a “scavenger” form, then the “Monster Android” form.

The Mad Thinker took part in the “villains war”, to win the prize offered by the enigmatic Black Lama. This led to a clash with MODOK (George Tarleton).

At this point, MODOK was piloting a powerful, giant humanoid mechaSome form of cool sci-fi super-vehicle or super-robot. The Thinker responded with an android of the same design as his MPA.

This unit fought MODOK toe to toe. But Tarleton shut down its mind with a mental blast.

In 1983, the Mad Thinker sent an android of the same class after Spider-Man (Peter Parker). The goal was to determine if Spidey truly had a danger sense.

This specimen seemed slightly more fragile. But it was still obviously too strong for Mr. Parker to engage directly.

However, Spidey could consistently outmanoeuvre the synthesoid, and predict its attacks. Eventually, he tricked it into being crushed by two enormous electrical generation turbines.

The original MPA returned in its original form (or close enough) in 2006. It had been rebuilt, perhaps by Annihilus, to serve among the Annihilation Wave.

Simply referred to as “the robot”, the MPA was detailed to Ravenous’ assault team.

Ravenous was also assisted by Paibok the Power Skrull, plus two universe-616 aliens controlled by Negative Zone parasites – Terrax the tamer, and the Delinquent (aka the Infant Terrible).

Praxagora mostly stalemated the MPA. But the assault was a success, with the Annihilation Wave breaking the United Front resistance. 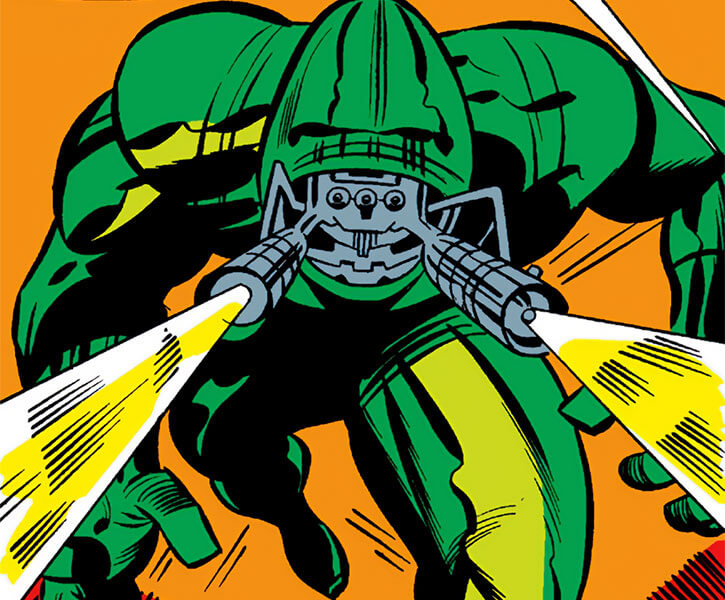 The MPA is entirely silent. It just walks up to its targets in a straight line, then relentlessly attacks.

Its basic tactic is to focus on one target until it’s stunned, then immediately move on to the next. The idea is to have at least half the opposition lying on the floor at any given point. So they can’t muster a Team Attack that could damage the MPA. 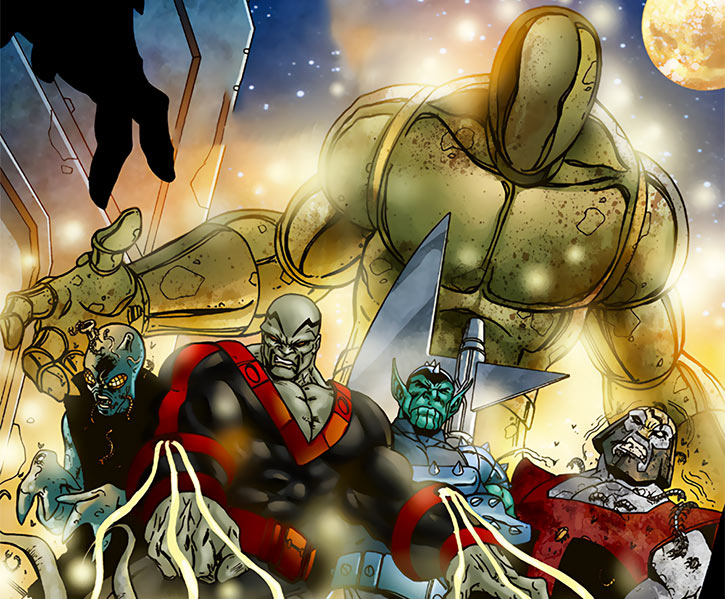 During the Annihilation War.

A lot here depends on the stats that Ben had back in 1968, particularly DEX, STR and BODY.

I’m also assuming a Partial Attack Vulnerability toward gas for the Thing. It’s not in our crude, early benchmarks for Ben but it’s common among Marvel bricksA character with superior strength and endurance, but usually (not always) lacking in mobility. Here again, specific numbers for the late 1960 Thing would help fine-tune.

Adding one or two Omni-Gadgets with 8 APs or so would make sense for the MPA, who had quite an arsenal. 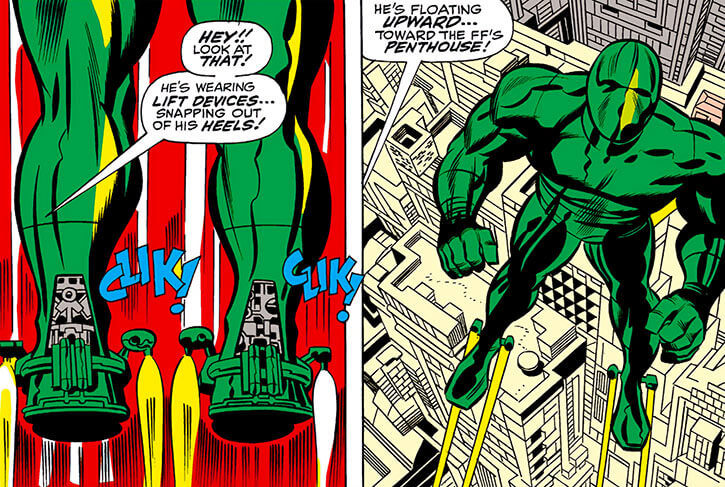 Ice production didn’t need much APs. If the Torch had attempted to fully counter it, he’d have fried his nearby allies. Which is what the MPA was counting on.

The APs of Temperature Control assume that the FF wore insulated uniforms with APs of Cold Immunity back in 1968. This too would have to be adjusted using FF profiles for this exact era.

Furthermore, it is likely that the Torch was partially compensating for the temperature drop to protect his teammates. So it’s hard to assess Temperature Control EV for this scene.

Two additional APs of Growth, raising STR and BODY, would be reasonable for its 2006 appearance. It held his own against the powerful Praxagora.

In fact, you could boost the scores further for the 2006 version. There’s but a few panels so we can’t tell, but having derived extra power from its exposure to the Cosmic Control Rod wouldn’t be surprising. 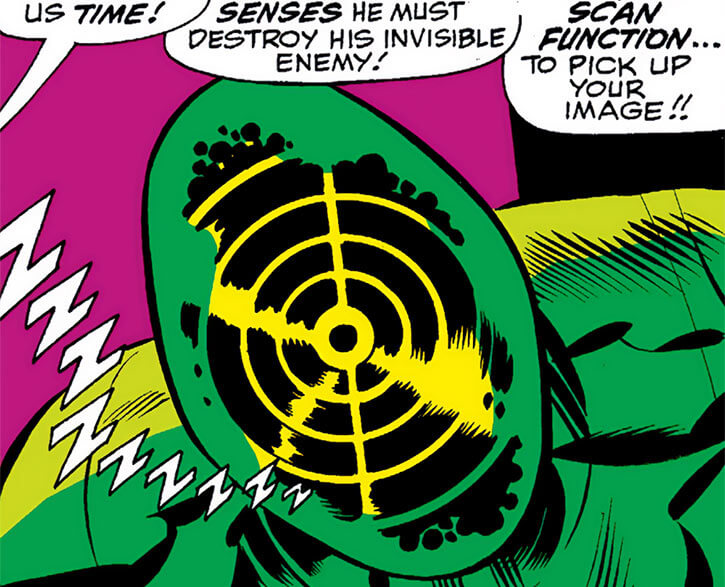