Mountjoy is a Merger mutant. He can physically merge with another person, burying that person’s mind and controlling their bodies like a puppet. The person he “rides” is conscious and aware, but unable to act except to attempt to break his hold, which few people, even the formidable Bishop, can do.

Mountjoy has access to their memories and skills while “riding” a person this way. Mountjoy refers to this type of possession as a “merger” (Personality Transfer).

But he has a nastier ability, which he apparently learned from the Emplates who trained him. He can draw a person or persons into himself, and then slowly “digest” them, absorbing their bodies, minds, skills, personality, and powers.

If he is not forced to “divest” the person will eventually cease to exist, and Mountjoy will have all their abilities. He can absorb more than one person at a time, and has done so even to multiple X-Men (Archangel, Psylocke and Gambit) with little difficulty, manifesting all their abilities, skills, and powers at once. (Personality Transfer + Vampirism). He refers to this as a “hostile takeover”.

Mountjoy has one ability that is difficult to account for. Bishop stated that he possessed a “Basilisk Field” which slows the reactions of those within his area of influence, up to five yards away.

Though this was definitely demonstrated in the Bishop LS, the source of the ability is unclear. I assumed it to be an item of technology, but it is never seen. I have come to the conclusion that it must be a power he has absorbed from someone else. In DC Heroes RPG terms, this is the Time Slow Power.

Although he dislikes physical confrontations (against equals, anyway) Mountjoy is physically quite impressive. For instance he’s able to tear the doors off cars and make prodigious leaps. He is quite a skilled combatant with diverse weapons, though he prefers to use his own daggers or a crossbow pistol that rapidly fires envenomed bolts.

Mountjoy prefers to strike from ambush, use his Basilisk Field to slow the target’s reactions, and possess them. If he has no use for the target, he may simply kill them, but not until after he’s played with them first. When stalking a victim, he is able to use his formidable intellect to learn all he can before setting up the takeover.

Mountjoy originates in the future from which the X-Man, Bishop comes. His early history is unknown, except that he was trained by the Emplates. These are vampiric mutants who infect others when they “devour” their genetic imprints. Mountjoy is known to have clashed with Bishop and his sister Shard. He was arrested, and put in the XSE detention.

Mountjoy was part of the mass escape orchestrated by Trevor Fitzroy that brought Bishop to this timeline.He “rode” Fitzroy’s lackey, Bantam, into this time. Not knowing that Bishop had followed, Mountjoy decided to have a good time. He lived quietly and indulged his peculiar tastes for quite a while without attracting notice.

After Fitzroy’s apparent death, Mountjoy decided that one person knowing of him was one too many, and decided to eliminate Bantam. 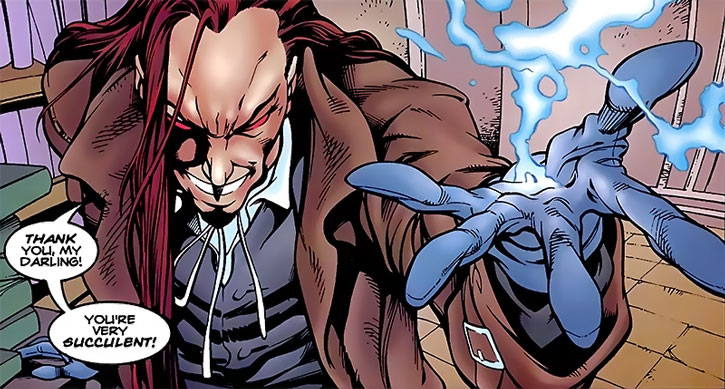 Bantam fled, leading Mountjoy a merry chase for some weeks. He evtnually turned to Bishop for help. Mountjoy, recognizing Bishop, decided that two people knowing abuot him was right out, and attacked Bishop.

The two had several clashes over the space of a few days. Mountjoy managed to possess Bishop and planned to use him to kill the X-Men as revenge against Bishop for the trouble he’d caused.

At the X-Mansion, Mountjoy quickly possessed Gambit, Psylocke, and Archangel. He planned to await Professor Xavier’s arrival to take him as well. However, Bishop and Shard (who at the time was reborn as a hologram) managed to trap him in the Danger Room and forced him to divest the X-Men he’d taken over.

Mountjoy was presumably taken into custody and incarcerated. But some time later Shinobi Shaw (then leader of the American branch of the Hellfire Club), while investigating the activities of the British branch, discovered that Mountjoy has infiltrated them.

Unable to get his agents close enough to the Inner Circle he asked Captain Britain, who has the hereditary role of Black Bishop in the Club, to investigate.

Some time later, during an attempt by another Club member to strip the power of a demon caged under London, Mountjoy made his move. He revealed himself to be ’riding‘ Scribe, the club’s secretary. He was then taken down by Captain Britain, who was waiting for him to expose himself.

Mountjoy is quite a dandy.

He dresses in fashionable grey suits of impeccable style, sort of retro-XVIIth century, complete with cravat, over which he wears a cloak-like coat of brown, to better to blend into the background. He wears high, laced-up boots with cleated bottoms and (apparently) steel toes. His overall dress and manner puts one immediately in mind of some English lord of older times.

His hair is straight and reddish-brown, falls to mid-thigh. He wears a neatly trimmed goatee, and his eyes are burning red with no iris or pupil visible.

Mountjoy is a creature of passions. A dedicated hedonist, he seeks whatever pleasures take him at the moment with enthusiasm and flair. Unfortunately, his passions are pretty bizarre. He has no use for humans except as food or playthings, and delights in teasing his victims until he gets bored and finishes them off.

In spite of his complaints about disliking physical combat (and between equals even more so). Contending with Bishop made him forget how bored he was with this century, bringing forth his best effort.

“I think we’re going to be very happy together, don’t you, my dear ?”

“Ah, your wings rise in a defensive mode ! Then that must mean it is time for me to assume an offensive posture !”

The fact that Mountjoy comes from the future takes away any problem with having him in the DC universe He arrives, makes one hero or group of heroes his “special project”, and makes life as miserable for them as possible. If one PC is also from another time, simply have them know of each other, replacing Bishop as the focus of Mountjoy’s obsessions.

If playing with established characters, Mountjoy would be perfect as an opponent for Batman. He is physically impressive, hard to stay caught, a serial killer, and can be anyone, so he’s a real challenge for the Dark Knight to find. 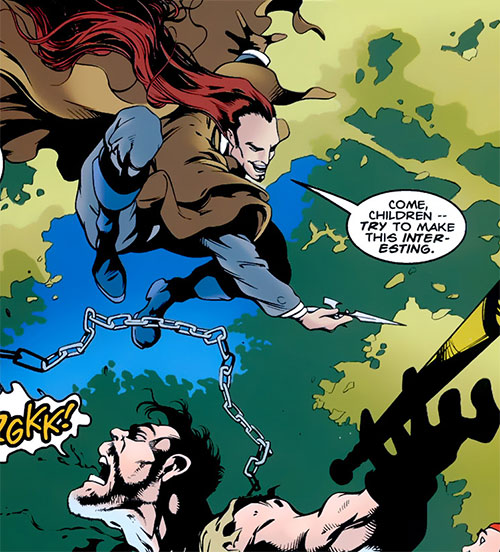 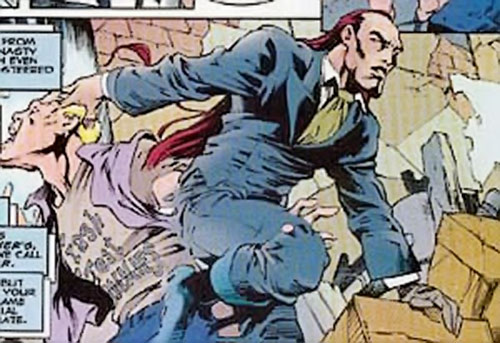 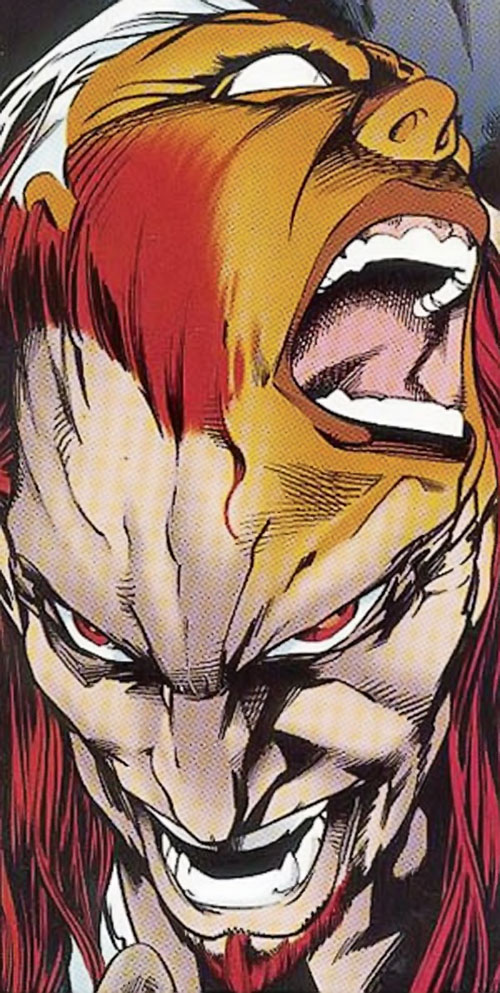 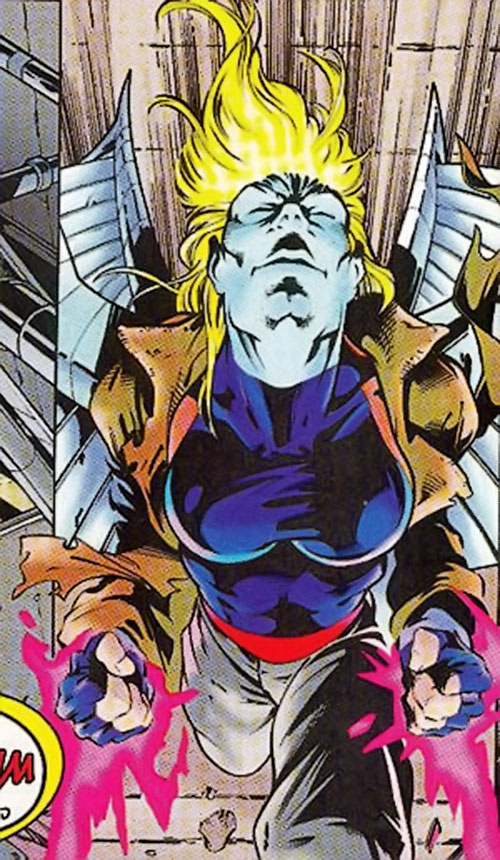