Mr Incredible is possibly his world’s most powerful hero. He possesses vast superhuman strength and durability.

He also is highly agile and is a skilled combatant, though perhaps his greatest power is the willingness to keep going in the face of seemingly unbeatable odds. His greatest strength is his love for his family.

Mr Incredible was his world’s most famed and lauded super-hero (supers, as they are called popularly), until a mishap while preventing a potential suicide led to a lawsuit for damages. This triggered not only an avalanche of personal-injury lawsuits against Mr Incredible personally, but a public backlash of opinion against supers in general.

Most of them were forced to go underground to keep from being sued to death.

Mr Incredible and his new wife, Elastigirl, retired and became simple Mr and Mrs Parr, and started raising a family.

Helen is trying hard to be a mom to three kids, two of whom have superpowers of their own and fight constantly. She has worked too hard to build a normal life for her family to abide his nostalgia for heroism.

Mr Incredible is a big, beefy guy with huge shoulders. He wears a bright red super-suit with black trunks, boots, gloves, and a domino mask, with his “Incredibles” logo on the chest. He’s got the typical super heroic jaw and “short back and sides” haircut (now thinning a little).

Mr Incredible is a fairly complex person. He seems on the surface very Superman-like… he helps people because he can. But he also seems to have a definite sense of responsibility to use his power wisely, because he is always finding excuses for using his abilities, and these always revolve around helping people who can’t otherwise help themselves…

This extends even to his job, where he helps customers negotiate the labyrinth of insurance regulations in order to further their claims. Likewise, he does seem to crave the excitement that the adventuring life offered, as seen where he and Frozone monitoring police radio for emergencies to help with.

Early in the movie, Bob is fairly depressive. he’s spent 15 years trying to be something he’s not. When he gets back into the action behind the scenes, he really comes back to life. He’s regained his purpose, and it shows in everything else. So much so that his wife initially suspects he’s having an affair.

Mr Incredible may be the ultimate family guy. He’d do anything for them, which is frustration since he can’t usually figure out what exactly can be done for them. Dash, for instance, is highly competitive and is not being challenged enough, particularly since Dash wants to play sports, but can’t because of the need to maintain a low profile.

Bob can see that the only cure is to help him push himself, but can’t figure out how without compromising the family secrets.

Mr Incredible is a hero in the old school… He believes in helping people, and will not willingly harm others beyond what is absolutely necessary (a fact his enemies occasionally use against him).

Jumper: “I think you broke something…”
Mr Incredible: “Well, given time and some therapy, I think you’ll come to forgive me.”

The “Public backlash against supers” motif belongs more in a Marvel setting than DC, but the overall feel of the book is more Silver Age  than modern, so placing them in the Post-WWII era is probably the right thing to do.

In which case, Mr Incredible and Elastigirl were supers during the final years of the McCarthy trials, and were the first to re-emerge in the new Heroic Age as the Incredibles.

Equipment:
INCREDISUIT [BODY 08, Radio Communication: 13 (Homing Signal only), HP Cost: 87. A special design by Edna Mode, The Incredisuit is resistant to damage from a variety of sources].

Even though The Incredibles only runs for 115 minutes, Mr Incredible has three “versions” through the movie.

His Original, “pre-litigation” iteration, has roughly the same general abilities, but probably no more than 70 HP (he doesn’t seem to ever be very challenged, handling situations almost as a matter of course), and has the Advantages of Popularity, A High Connection to The City Police, his Incredisuit had a Body of 6 and no Radio Communication, and he commonly made use of the Incredibile :
INCREDIBILE [DEX 04 STR 06 BODY 08, Vehicles: 04, Running: 07, Radio Communication: 10, R#: 2, HP Cost: 164. Advs: Area Knowledge: City, Insta-Change (Car and Mr Incredible both)].

His “retired” version was especially low on HP after 15 years in retirement, as he was incredibly (there’s that pun again) out of shape. His HP total was probably no higher than 30 at this time, but once he started adventuring again he quickly amassed a larger total.

His “Incredibles” version is as above, tho he has probably lost the Dark Secret and MIA around the end of the film. 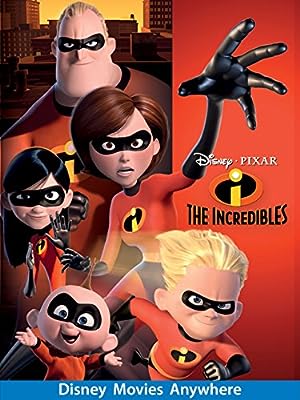 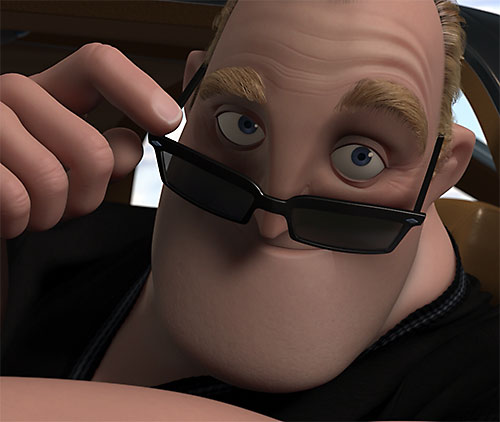 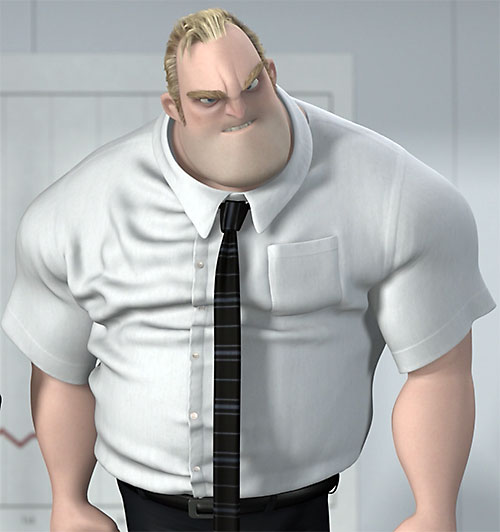 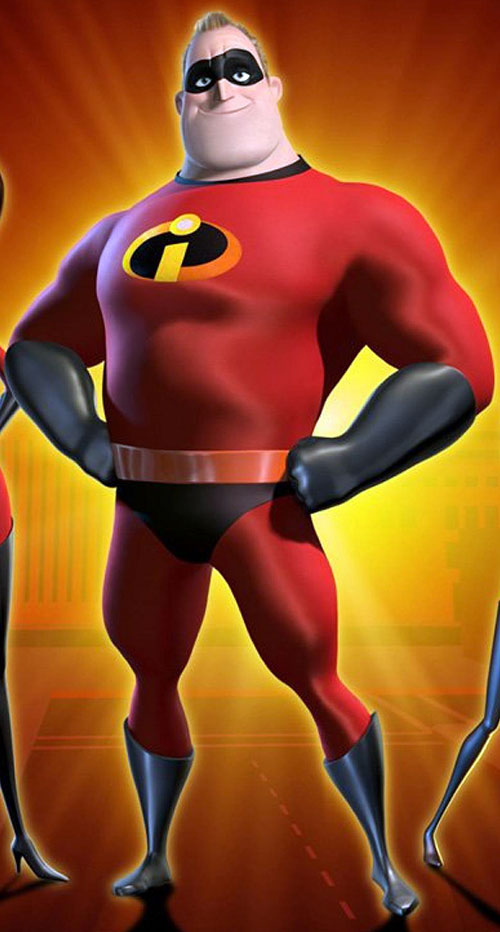 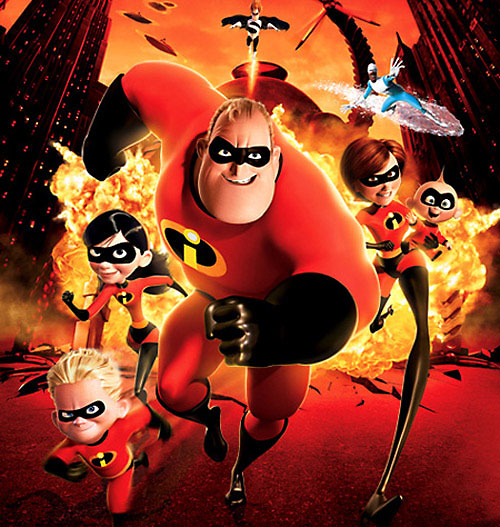 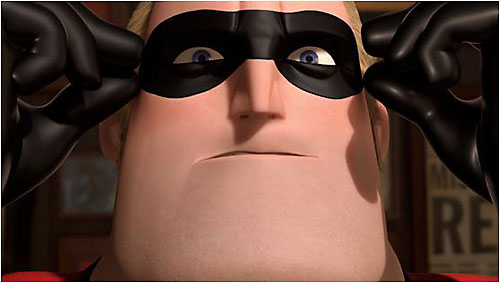 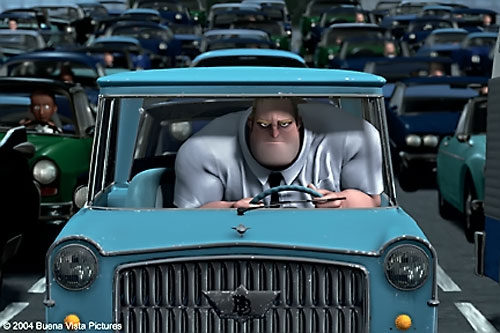 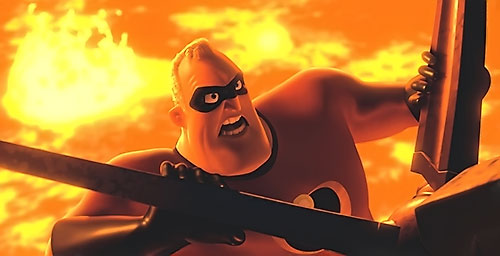 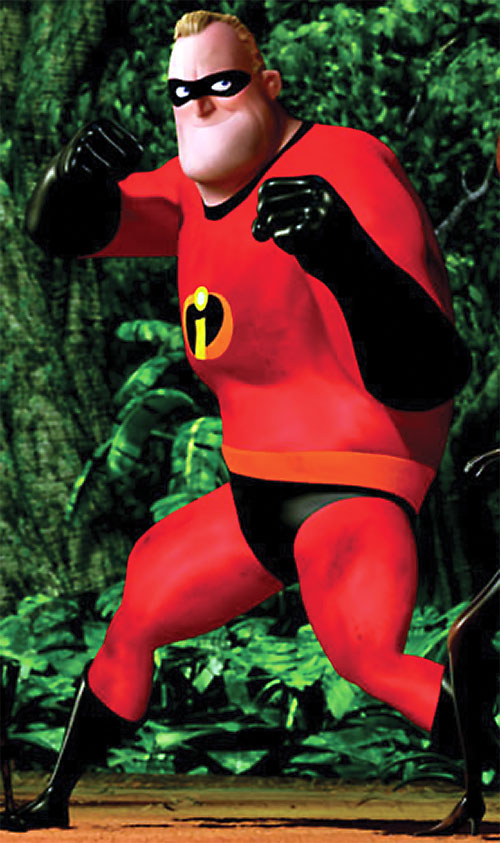 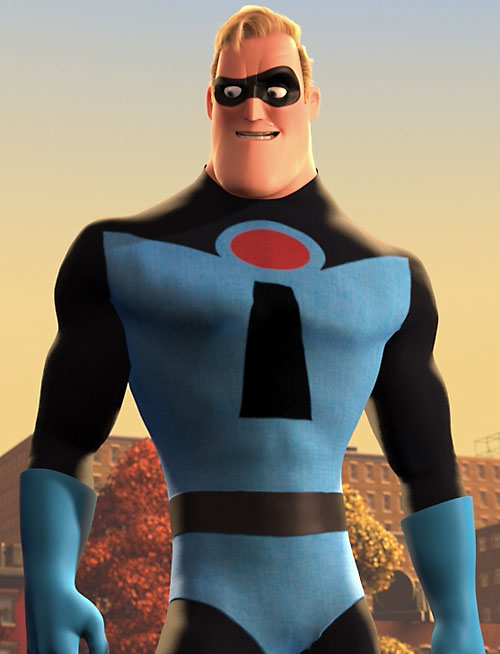 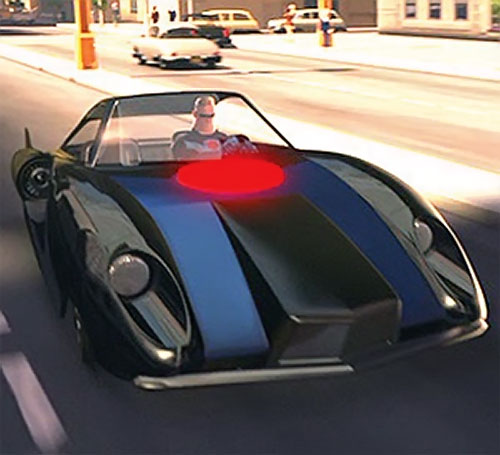