For more about MC2 and general context, we suggest you first read our Spider-Girl profile.

This profile has S P O I L E R S for the original Spider-Girl series.

Mr. Nobody is a professional hitman.

He dual-wields compact submachineguns. These look like a smaller version of the Fabrique Nationale P90 Personal Defense Weapon.

He seems to have excellent reflexes and a solid constitution.

Though he has been arrested several times, there is no way of determining Mr. Nobody’s identity. Thus, his earliest fingerprints had to be listed as John Doe’s.

His signature ability lays within the hardened chestplate he wears. Originally, it included teleportation circuitry – a deadly asset for an assassin.

Later on he had an intangibility system added, making him extraordinarily difficult to stop.

Mister Nobody can pop practically anywhere. He will only be solid for very short and carefully timed instants when he needs to fire a burst or touch something.

The teleportation and intangibility systems are presumably cybernetically activated. Even fighters with superhuman reflexes and speed, such as Spider-Girl (May Parker) or Kaine, find it very difficult to time their attacks to hit Mr. Nobody while he’s solid. Nobody can switch at the speed of thought.

Even if their timing is impeccable, having a blow connect requires a dose of luck as it’s down to a host of tiny factors. Well-timed surprise attacks have greater odds of success, but surprising a guy who teleports around isn’t easy.

The vest in itself has a metal shell. But a person with superhuman strength (even at a relatively low level like an early Spider-Girl) will probably be able to wreck it.

Mr. Nobody’s costume is reinforced, since he could take several blows from Spider-Girl.

Mr. Nobody is a mob enforcer and hitman. He apparently worked for the Kingpin (Wilson Fisk) for years. Even though the Kingpin was in prison, he still wielded considerable power within and without. That Mr. Nobody could teleport into Fisk’s cell whenever needed was an important edge.

For years, the imprisoned Kingpin prevented any mob from growing large enough to threaten him. Mister Nobody was apparently one of the men who made that possible.

Mr. Nobody randomly ran into Spider-Girl during one of her very first outings. Thinking that she was an assassin sent after him, Mr. Nobody attacked and was narrowly defeated. However, he easily escaped by teleporting.

A few months later, the Kingpin had Mr. Nobody attack a packed courthouse to rescue the captured criminal Crazy Eight, and thus reaffirm Fisk’s power. The attack was a carnage, but Spider-Girl stopped the two villains with the discreet help of her father. Mr. Nobody was arrested after Spider-Girl wrecked his teleportation system.

About 2 years later, Mr. Nobody came back and had his equipment rebuilt and upgraded. Presumably the Kingpin had arranged for him to be freed.

The hit failed as the assassin ran into Spider-Girl, Raptor, Darkdevil and Spider-Man (Gerry Drew). Mr. Nobody simply remained intangible during most of the fight, and teleported away once he ran out of ammunition. 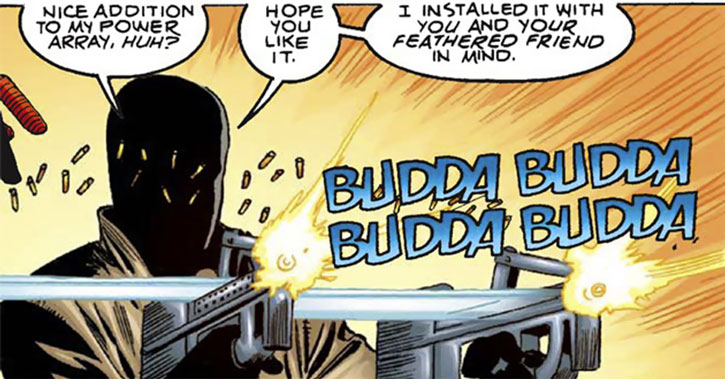 The Kingpin then had Mr. Nobody help with his preparation for the coming gang war with the newest up-and-coming New York City crimelord, Canis. In particular, the hitman recruited Crazy Eight anew and provided discreet assistance to let Spider-Girl and Spider-Man (Drew) oppose Canis.

However, even with Crazy Eight around to eliminate them, gangs loyal to the Kingpin started switching over. Furthermore, Mr. Nobody came to doubt that Crazy Eight was reliable since his brother Funny Face was a close associate of Canis.

The Kingpin had Mr. Nobody run surveillance on Eight – who was indeed in early talks with Canis. Nobody ’ported in to kill Funny Face, Crazy Eight and Canis. Spider-Man (Drew) attempted to intervene, but was clearly out of his depth. Spider-Girl leapt in and snatched Drew out of the line of fire, but as a result Mr. Nobody’s gunfire killed Crazy Eight.

Funny Face blamed Spider-Girl, and his mother Angel Face came to help him hunt her down. The Faces rampaged through New York City’s underworld, making it almost impossible to conduct business.

Unlike the Faces, the Kingpin considered that Mr. Nobody was to blame for the situation, as he had never authorised a hit. Fisk set up an alliance with Canis, and gave the word that Nobody was no longer under his protection.

Mr. Nobody’s downfall was fast. Though he fought off Darkdevil and Spider-Man (Drew), he was taken down by Spider-Man (Peter Parker). Meanwhile, the Kingpin negotiated to let Canis take over part of his activities, intending to strike back later. Furthermore, Spider-Girl negotiated with the Faces so they would leave New York. Mr. Nobody was arrested and sent to Ryker’s.

Mr. Nobody was among the criminals recruited at Ryker’s by Agent Wheadon to form a secret governmental team investigating the arrival of the Black Tarantula (Fabian LeMuerto)’s mob in the US.

However, Nobody quickly went rogue. He struck a secret alliance with Canis – who paid him a million per hit to kill mob bosses in New York, plus five to kill Fisk. Mr. Nobody closed several such contract, including the Kingpin whom he killed with a bomb.

To gain breathing room, Mr. Nobody gunned down Spider-Girl’s friend Normie Osborn. He then convinced Spider-Girl that Wheaton’s team was responsible for this, the mob murders, and the recent disappearance of Darkdevil. Osborn survived, and after a confrontation with Wheadon Spider-Girl learned that she had been tricked – it was actually Mr. Nobody who was behind all of it.

During the funeral of the Kingpin, Mr. Nobody faked an attempt to kill Canis and the Tarantula. This was part of Canis’ general measures to hide his ties with Mr. Nobody. However, Spider-Girl intervened and tagged the assassin with a spider-tracer.

The tracer allowed her to track Nobody down just in time to prevent him from executing Darkdevil, whom he had been torturing for several days. A few days later, while Agent Wheadon was still obsessing over Tarantula being behind it all, Spider-Girl realised whom Mr. Nobody’s real employer had been.

She and the Tarantula forced a confession out of Canis, who was arrested. Yet Canis still claimed that the power vacuum meant that he was the new Kingpin. As to Mr. Nobody, he was imprisoned and wasn’t seen again.

Mr. Nobody’s costume is an almost featureless, full-body black suit with a blank face. This completely anonymous costume has a trench coat thrown over it, both to have pockets handy and as a further symbol of going incognito.

The chestplate and circuitry are hidden under the bodysuit. Once intangibility circuits are added, the body suit becomes a mix of jet black parts and silvery parts.

Mr. Nobody has had his face changed numerous time, using an underworld doctor specialised in safe and rapid cosmetic surgery. His physical build is fairly ordinary. He doesn’t have a super-heroic physique, though one gets the impression that his pre-intangibility costume was padded to make him look bulkier.

A ruthless, pragmatic killer always looking out for number one. His main weakness may be his ego. It’s not crushing, but he slightly over-estimates his rep, his skills, his intelligence and his charisma. This may lead in to linger a bit too long because he wants to have the last word. Or to assume that some event is about him even though it’s random.

Mr. Nobody considers that everyone else is expendable.

Mr. Nobody’s thing is that he’s everywhere and nowhere, and is no-one as he (at least on paper) never can be caught. He likes to play on this theme with sarcastic confidence, mocking heroes who literally cannot touch him.

He generally seems to have sadistic and manipulative tendencies, though these were neutered by Spider-Girl not being published by Dan Didio. Playing him like the typical pop fiction sociopath (smart, manipulative, completely amoral, self-centered, revenge-prone, etc.) should get you pretty close to the target.

No, not Dan Didio. Mister Nobody.

“I hate to cut the festivities short, but I seem to have run out of ammunition. This was supposed to be a simple pop, so I didn’t bring any spare clips, and these automatic weapons — you wouldn’t believe how many bullets I go through ! This was fun ! We should do it again.” (teleports away)

Hitting Mr. Nobody while he is solid is difficult. Even for extremely fast people such as Spider-Girl or Kaine, it requires a fair bit of luck.

Use the following guidelines :

Special tactics such as using superhuman senses to do the targeting should be rewarded by lowering this random factor. Counter-intuitively, based on decades of Flash stories, Superspeed probably cannot make these odds better. 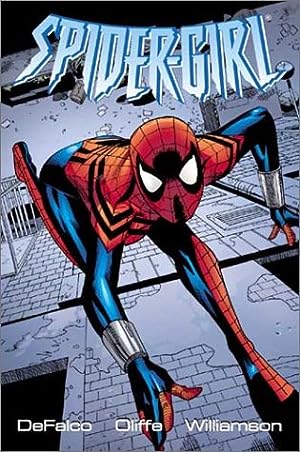 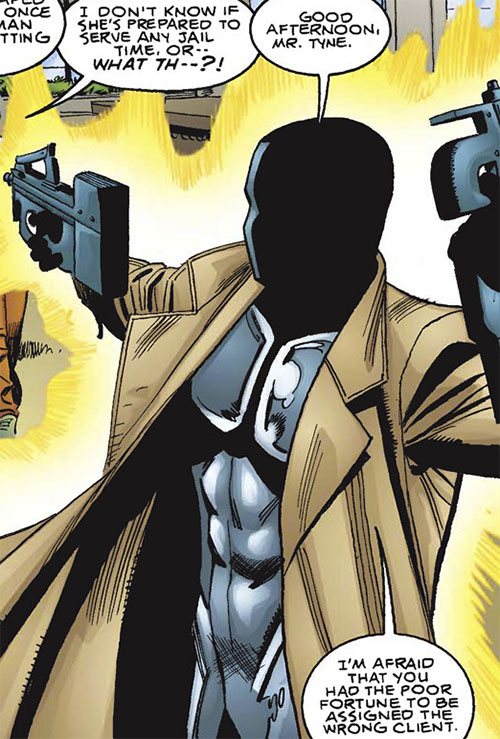 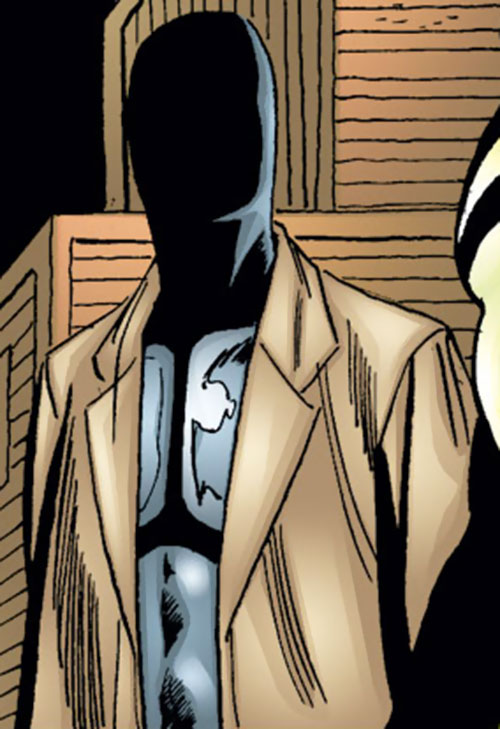