*This* Mister Sinister is an obscure but relatively early (1942) enemy of Superman. He’s fairly typical of this era.

He may be mostly notable for sharing a name with Mister Sinister, who back during the 1990s was a famous Terribly Mysterious Big Bad in X-Men stories.

He was able to create a giant image of himself. These continued his earlier mailed threats and taunted Superman when he tried to attack it. This was not clearly shown as being accomplished by artificial means, but it seems likely.

He later used superventriloquism to threaten the Daily Planet employees.

His main machine could abduct anything from a single person to the entire city of Metropolis to his purple-hued “fourth dimension”. It did not seem to have the subtlety needed to be able to transport just a pile of money. Sinister had to transport a bank, get his gang to loot it, and then transport it back.

The fourth dimension  was not shown to any great extent. But it has its own life-forms such as the “weird shadow monster of the dimensional world”. This is a vaguely dragon- or dinosaur-shaped creature.

Sinister’s force ray rifle was capable of defeating the shadow monster with one shot. It did not kill Superman (much to Sinister’s surprise), though it did paralyze him momentarily.

Sinister’s power over dimensional currents threatened to shake the Daily Planet building to pieces. This was also not shown to be a device instead of a power, but it has been treated as a device in this write-up.

A message delivered to the Daily Planet warns the reporters of Sinister’s sinister plan to abduct a new skyscraper. Lois and Clark attend the building’s dedication ceremony during which the building disappears, despite Superman’s intervention. Returning to the Planet, the reporters learn that Sinister has demanded a ransom of $100,000.

Superman tries to convince the businessmen not to pay the ransom. But that fails after a giant image of Mister Sinister taunts them all. Superman shadows the board chairman carrying the ransom, but is helpless to stop the chairman from disappearing. The man reappears moments later minus the ransom, which was taken by Mister Sinister’s thugs.

Superman discovers that Sinister kept his word and returned the building. But now the next door bank has disappeared. Clark decides to get the Planet to write editorials to rouse the citizens against Sinister, but Sinister who has been watching, threatens to destroy the Planet if they try.

A sinister turn of events

They do not back down, so Sinister transports the Planet (and the people therein) to the fourth dimension. There, his thugs divide the group.

Clark is tied to a chair in front of a dimension ray cannon. But moving so fast that he can’t be seen, he escapes and turns to Superman. This causes the thugs to think Clark is gone. Superman then defeats the thugs and goes off to rescue Lois and Perry White. The two have been tied to stakes so that they will be easy prey for a weird shadow monster.

Mister Sinister, warned about Superman, shoots him with a force ray rifle. His first shot misses but defeats the monster as Superman battles it. Sinister then shoots Superman who is only momentarily paralyzed.

Sinister then decides to kidnap all of Metropolis so that the rest of the nation will have to surrender to him, but Superman stops this plan.

Sinister then uses his unnamed Dimension Escape Device. But Superman follows him and makes Sinister return. Sinister then escapes as thugs briefly delay Superman. The villain uses dimensional currents to attempt to shake the Planet apart. The building apparently endures this, as Superman is never seen undoing this effect.

Sinister then threatens Superman with an uncanny ray rifle. But Superman punches him, causing Sinister to drop the rifle. It fires its beam at Sinister who vanishes, leaving nothing but his shadow behind. Superman presumably returns everyone to the safety of the Earth dimension, leaving one to wonder if Sinister is truly finished or not.

Well, since he never appeared again, I guess he was truly finished. But he could easily reappear.

Mister Sinister has grey skin, a bald head, and slightly pointed ears, with no explanation given for his odd appearance.

He wears a long-sleeved green minidress with purplish-grey boots, belt, and cape.

Mister Sinister is an unrelenting classic mad scientist. He will pretend to surrender in order to gain an extra opportunity to use some new secret weapon.

His main annoying habit is speaking in rhyme, though he only does it when he wants to sound impressive (not that it works). He clearly needs time to come up with such a rhyme, unlike Mr. Bones or Etrigan.

“Take them away ! Treat them to the various fates I’ve devised for them !”

“The laugh’s on you ! I’ll beat you yet !
I’m the toughest opponent you’ve ever met !
Not bad for a frustrated poet, eh ?”

“Heed not Superman ! He can not administer
Successful opposition to Mister Sinister !” 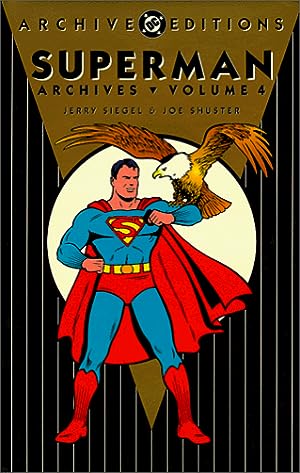 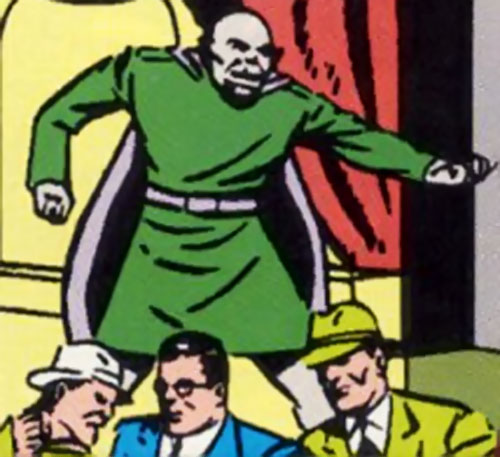