It also includes S P O I L E R S about the second half of Ms. Marvel volume 1.

Ms. Marvel has continued to refine her powers through experience.

She is faster than before, and is better at augmenting her body mass. 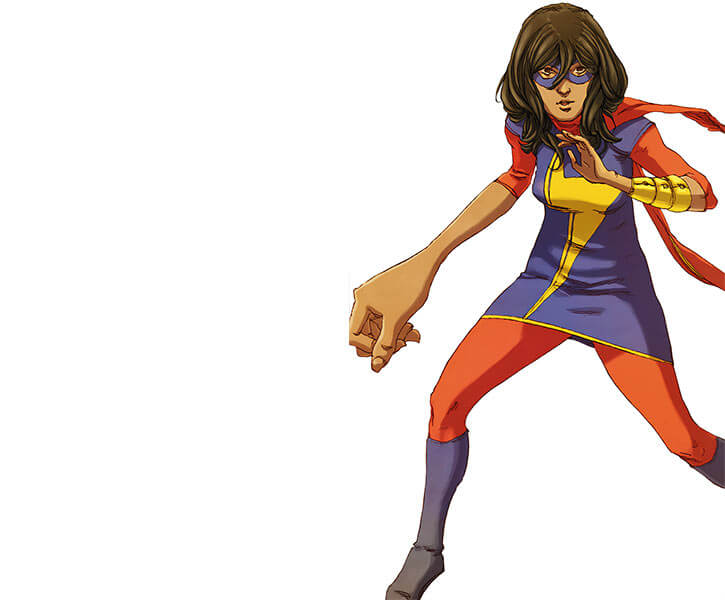 She also demonstrates some basic technical skills. She’s no gadgeteerTechnnologist who builds comic book devices like those Batman uses, but she actually paid attention to her physics lessons as well as home economics lessons about how common electronics work.

Her home-made (but pretty good) costume was replaced by one professionally-made in Attilan. It presumably uses a form of unstable molecules. It’s unobstrusive enough for her to wear under her normal clothing.

Fetty Wap’s debut with Trap Queen comes to mind since it was a big hit. It’s a good chronological marker too.

After the defeat and accidental apparent death of the Inventor, Ms. Marvel agreed to associate more with the Inhumans. This way she could use their training facilities and improve as a super-heroine.

At this point New Attilan had been built near New York City. This made the commute easy even without Lockjaw.

However, in 2015, the New Inhuman named Lineage (Gordon Nobili) tricked Queen Medusa and her men into leaving New Attilan and walking into a deadly trap.

He took over for a time. Lineage also recruited malcontents – including Kamala’s cousin, Kamran, whom she had not seen in a dozen years.

Kamran was sent to seduce and recruit Kamala. But he narrowly failed.

Lineage then had his allies kidnap Ms. Marvel. But he underestimated her power and she escaped from New Attilan.

By this point, Lineage was starting his takeover of Earth by making Humans insane. He began by Jersey City, apparently as his revenge against Ms. Marvel.

Humans started killing each other in the streets.

Lockjaw brought in a small cadre of NuHumans loyal to Medusa to help Kamala contain the damage. Eventually Medusa, Karnak and the NuHuman Iso took down Lineage. They stopped the maddening effect in Jersey City.

Lockjaw then returned to Attilan. He was needed there, and it was becoming clear that Ms. Marvel could take care of herself. 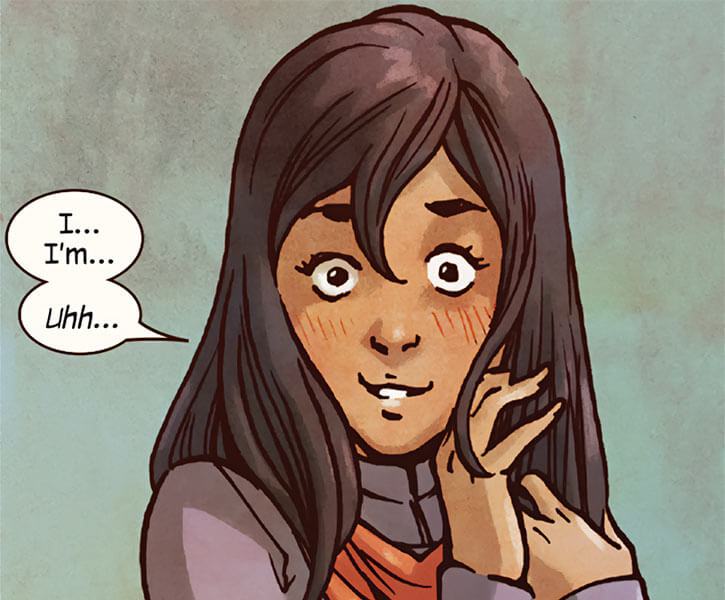 An Incursion began in 2015. This is a kind of cosmic crisis where two versions of Earth collide and are destroyed – long story.

The approaching planet could clearly be seen from Manhattan. Panicking crowds futilely fled to New Jersey, and Ms. Marvel helped organize, and prevent chaos and riots.

As the Avengers were working, Captain Marvel (Carol Danvers) came to Jersey City. She warned Ms. Marvel that no backup was coming.

Over the moon as she finally met her idol, Khan convinced Danvers to stick around for a bit and help.

During that time the two Marvels saved Aamir. Kamran had exposed him to Terrigen Mist in an effort to create another New Inhuman.

Danvers eventually told Khan that the world was about to end.

Trusting her idol, Kamala tried to settle some personal accounts.

Reality then faded unto nothing.

But the machinations of Doctor Doom (Victor Von Doom) allowed for a patchwork mini-reality called Battleworld to survive. In this reality, Queen Medusa was one of the feudal lords under Doom.

Medusa’s fief was once breached by a squad of Ultron drones. This raid slew the family of Kamala Khan, a subject of Queen Medusa. Which drove her to join the military and eventually the personal guard of Queen Medusa.

This version of Ms. Marvel seemed better-trained. Her much better mastery of her powers made her a super-spy.

While spying on anti-Doom rebels, Khan was intercepted and captured. But she was soon freed, as Medusa’s troops captured most rebels.

However, Medusa then revolted against Doom. Rebellion leader Blackagar Boltagon had revealed to her that New Attilan was a mind control system to ensure obedience.

The vast majority of Inhumans, including Khan, joined their Queen in rebelling. 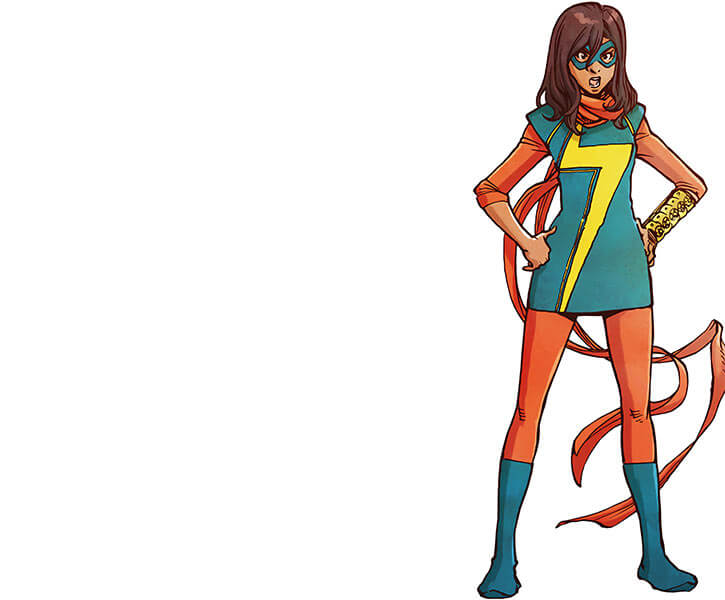 Unbeknownst to them, similar events had occurred several times before as an experiment by Doom. Remarkably, in every single variant and iteration, Medusa and Black Bolt fell in love and revolted against Doom.

Using his cosmic powers over Battleworld, Doom “rebooted” this domain of his world once again.

In his new scenario Black Bolt was his local lord, and Medusa was the resistance leader. On which side Kamala stood this time is unrevealed.

In another iteration of this Battleworld domain, Ms. Marvel was an employee at the Circle Q built into a sort of motor death sports arena, Doom’s Killiseum. Her boss had her do product placement by offering food to the champion Robbie Reyes.

Reyes and Ms. Marvel ended up stopping an alien monster instead.

Eventually, the heroes restored Universe-616. Earth-1610 still had been destroyed, albeit some refugees made it to Earth-616.

As of this writing, all specifics are unknown.

In a possible, close future of Earth-616 (a few months or weeks after the events on Battleworld), Ms. Marvel is/will be, along with Spider-Man (Miles Morales) and Nova (Sam Alexander) recruited as new blood for the Avengers. 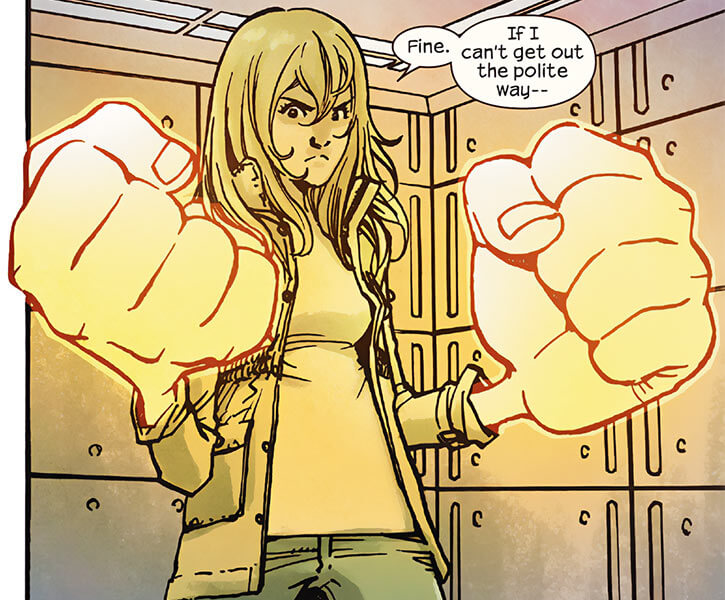 By this point it’s clear that Kamala Khan was born to be a super-heroine. Almost literally so, given her Inhuman genes.

Kamala is still obviously a high-school nerd. She makes incessant references to Star Wars, The Simpsons (nothing is ever enlarged, it’s always embiggened) or World of Warcraft.

But she now comes across more as a young adult than as a teenager – and a smart and collected one to boot.

The big exception to this remarkable maturity is love and romance.

Kamala is kept aggressively sheltered away from boys by her family. Any possible romantic involvement must be filtered by her family. Her brother will be dispatched as a morality enforcer for anything that even vaguely resembles a date. Any interest in a man without Pakistani origins would also be nixed by her parents.

Thus it’s not really a part of her life, beyond exposure to love songs and movies. She has zero experience with it. She’s interested in romance, but she’s painfully aware of how awkward and controlled it all would be. To her, it’s not worth the hassle.

Eventually, when discussing with Bruno, she realised that being Ms. Marvel was everything that she wanted and that she wished to pour her whole heart in it. Being Ms. Marvel is so huge to her that it makes a relationship impossible for the time being, and eclipses many aspects of her life.

But how sustainable is that for her ? 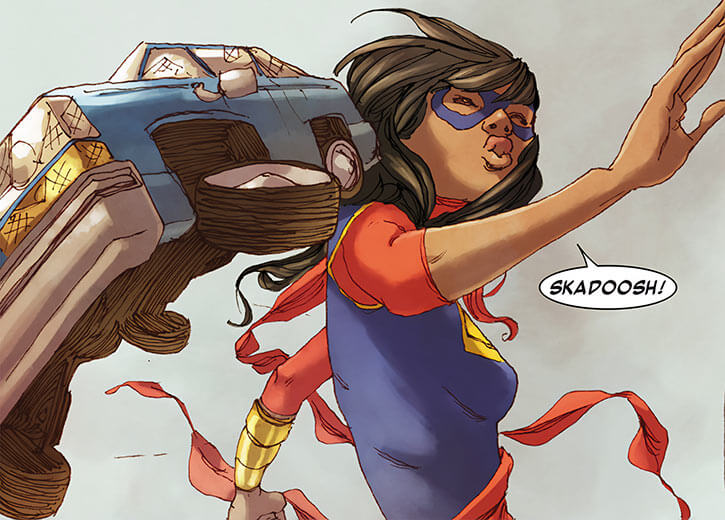 (Leaping atop a giant robot while preparing an enlarged haymaker) “Embiggened fists of rage !”

(Reeling from what the Inhumans told her) “I’m a Pak-American, part-alien morphogenic nerd. I’m alone in the universe.”
Kind Inhuman doctor: “Unique is not the same as alone.”

“You think that being tough is the same as being mean. But you’re not even a villain. You’re just a bad guy’s lackey in a pair of nice shoes.”

(Fangirl-throwing herself at an embarrassed Captain Marvel) “Everything sucks except for you !”

(Scolding inept looters) “You ! You have skills ! Go use them for good instead of stupid ! Everybody’s gathering at the school… go see if you can help the AV club get a better wi-fi signal.”

Nakia: “I had to find out from my sister who found out from her friend’s fiancé who found out from some uncle at the mosque that you were, like, almost dating that Kamran guy !”
Kamala (facepalming): “I’m so glad the Muslim gossip wire service is still fully functional.”

All Powered Skills are Contingent Upon her Powers.

Responsibility of Upholding the Good.

She keeps her smartphone in her bracer thingie. 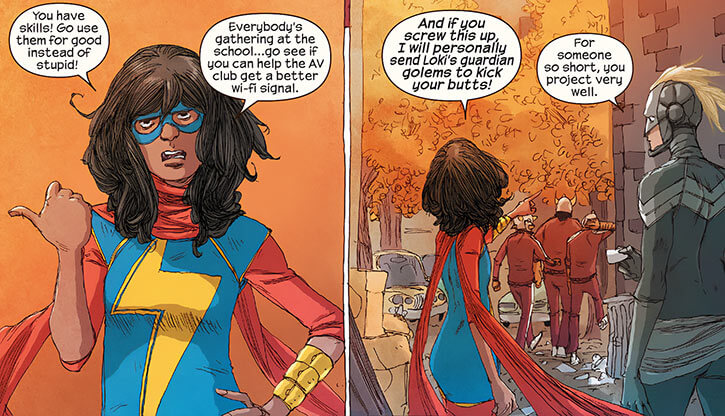 If she is wounded, Kamala can suspend all pain, blood loss, etc. by sticking to her baseline form and not using her powers.

However, her wounds return in their current state of healing as soon as she uses any of her Powers beside Regeneration.

As noted in the P&A section, using her healing factor leaves her depleted. In game terms, this corresponds pretty well to Ms. Marvel using her Hero Points for Last Ditch Defense.

Early during this era, many of Ms. Marvel’s Mental and Mystical Attributes were lower by one AP.

She also had 25 Hero Points. 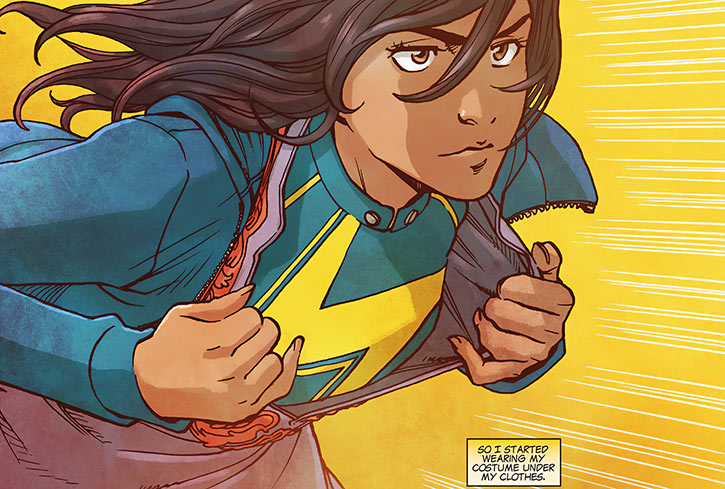 None at this point.

Source of Character: Second half of the 2014 volume of Ms. Marvel.