All of that athletic prowess was made even more efficient when she became one of the notable successes of the Power Broker program. Her strength, durability and especially speed were increased to superhuman levels.

Sharon Ventura is a woman driven to be the best in whatever she attempts. The only daughter of a U.S. Army officer, she was continually driven to live up to his high expectations and was cruelly rejected when she failed. Father and daughter finally split when Sharon, enrolled in military academy, was expelled for refusing to testify against a fellow classmate.

Sharon and her father never reconciled, and General Ventura died a year later of a heart attack.

Following the death of her father, Sharon began to seek out dangerous sports and occupations. She sought to master them and in doing so prove to herself her own worth. She soon developed a reputation as a lion-tamer, scuba diver, motorcycle performer, mountain climber, and stuntwoman. Eventually, she found work as a member of the Thunderiders, a group of mutant motorcycle stuntmen.

I am from Beyond

Sharon was with the Thunderiders when many heroes of Earth were kidnapped by the Beyonder and forced to participate in the first Secret Wars. Ben Grimm of the Fantastic Four remained behind on the Battleplanet created by the Beyonder, where he met his “dream woman” – a lady who greatly resembled Sharon.

Upon his return to Earth, Ben encountered Sharon. He fell for her immediately, an affection that Sharon did not return to the same degree. Sharon and Ben both drifted into the Unlimited Class Wrestling Federation, a sports group which featured matches between super-powered and augmented individuals.

Sharon was approached by agents of the Power Broker, who — through his scientist, Karl Malus — was augmenting a number of individuals for both private and personal gain. Sharon Ventura underwent part of the process. Howbeit, feeling that artificial enhancement was cheating, escaped before the full treatment was applied.

What was not known to Ventura at the time was that the initial stages of the treatment were already completed, and the final stages of the “treatment” involved the administration of an addictive drug, which the Power Broker used to keep his agents in line.

Now enhanced by Malus’s system, and without the need for the drug, she took the stage-name of Ms. Marvel and joined the UCWF’s female contingent, The Grapplers.

The Power Broker sent his own agents to retrieve her, and Sharon was finally captured after several failed attempts and returned to Malus’s lab. Both she and another “traitor” to the Power Broker, Demolition Dunphy (also known as D-Man, Captain America’s partner) were placed in the enhancement device as involuntary experimental subjects.

D-Man and Ms. Marvel were rescued by Captain America. Insane with pain, D-Man gained strength over and above his enhanced level for a short time before collapsing of a heart attack. But the effects the experiment had on Ms. Marvel (if any) have not yet been revealed.

Following her release from the hospital, Ms. Marvel was offered a position in the Fantastic Four, to fill one of the two slots left vacant by the retirement of Reed and Sue Richards. The new team consists of Team Leader Ben Grimm, Johnny Storm (the Human Torch), Crystal the Inhuman and Ms. Marvel.

At first glance, Sharon looks like an hyperactive, happy and multi-talented person who enjoys life to the fullest. In reality, however, she is rather lonely, confused and somewhat pathetic.

Her actual goal is to run away from life and any responsibilities. Although she wishes for respect, her low self-opinion prevent her from gaining any. She greatly respects Ben Grimm, though.

Near the end of that period, Sharon is brutally molested by a bunch of goons, and her inner fragility lead to her developing an almost crippling fear of men and loathing her own attractiveness.

Bonuses and Limitations:
Superspeed does not allow task time reduction (-1). 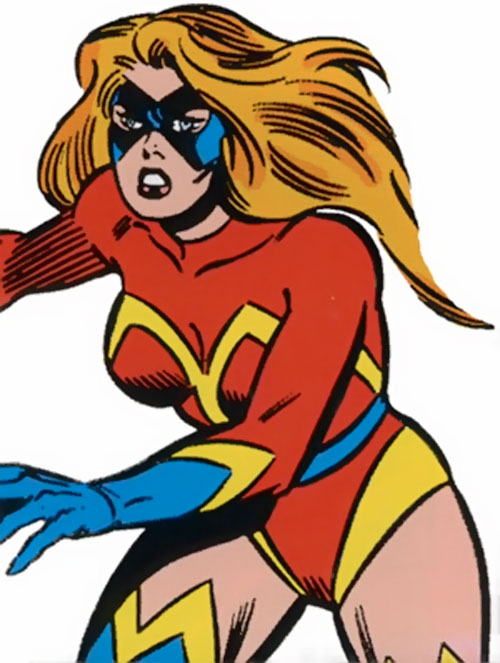 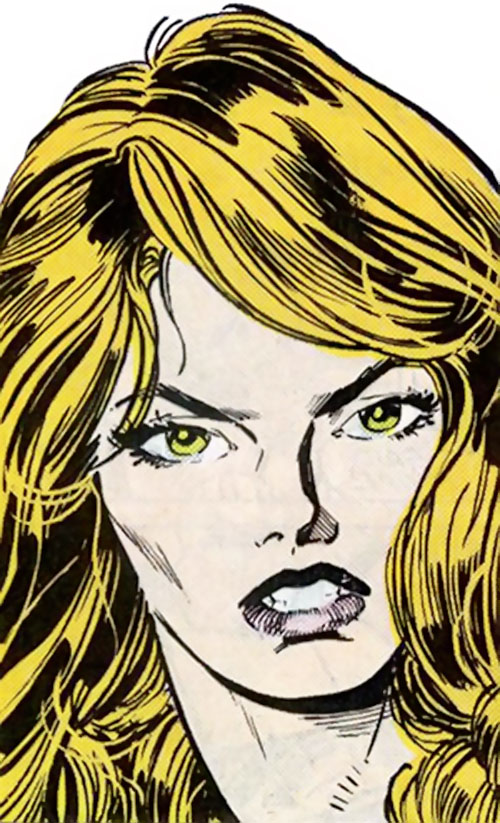