If you need more orientation, you can also check our marvellous guide to Ms. Marvels.

Ms. Danvers retains a diminished, partial version of her Binary powers. She seems to be a bit under her peak power level as Ms. Marvel.

Beyond getting the warworm, early Warbird :

(Carol’s flight now leaves an energy trail. It is reminiscent of the one from Captain Marvel (Mar-Vell). Which may be a hint about… something.)

In late 1999, Warbird accidentally discovers that she can absorb many forms of energy. This is apparently an evolution of the ability Binary had to draw energy from a white hole.

This didn’t work with a vibration field. But it worked with heat (from a raging fire) and electricity (from power lines).

By 2000, she has practised enough to absorb incoming energy (say, from blaster  small arms) and immediately reuse it.

Ms. Danvers can also draw from ample experience as :

(Look, we told you she’s had an interesting life.)

She also took the time to requalify for various kinds of Earth vehicles, to earn her licenses back.

On the other hand, she’s not as assured, confident and impressive as she was back during her previous stint with the Avengers. Though as her health improves, comments about her attractiveness make their return.

On the gripping hand , she has matured as a writer. Her prose is excellent.

Warbird is an expert at aerobatics and air-to-air combat. She ported her fighter pilot training to unassisted aerial combat. She also presumably acquired extensive unassisted space combat experience as Binary.

Warbird is calling, on her way back from the fire

By mid-2001, Carol seems mentally and physically stronger. This is not stated outright, but her character sheet  seems to change enough to warrant a separate writeups.org character profile.

This seems to be a combination of :

Lessee, what says “1998” in a big way… ah yes. Especially since the video’s metaphor was about stopping to run and confronting one’s own fears and weaknesses.

For a short while, Warbird managed to function with the Avengers despite her suffering and alcoholism.

For instance, she exposed the Corruptor as the controller of Hyperion and other Squadron Supreme members.

But her colleagues could tell something was wrong with her. She was acting moody, aggressive, paranoid. Tony Stark, once a severe alcoholic, recognised the symptoms. He had a discreet meeting with Danvers, but she angrily stonewalled him.

Kree forces led by Admiral Galen-Kor then launched their terror attacks against Earth and the Avengers. Warbird was one their targets due to her part-Kree genetics. A drunk Warbird :

The Avengers court-martialled Carol, but she angrily quit midway through. Her friend the Scarlet Witch (Wanda Maximoff) was particularly uneasy about it. But Wanda was mired in her own problems.

When the Avengers fought Galen-Kor’s Lunatic Legion on the Moon, Danvers impulsively tried to join the fight to show ’em. But though reaching the Moon would have been trivial as Binary, Warbird failed. She nearly killed herself in the attempt.

Still refusing to admit her alcoholism, Carol moved to Seattle. That was in part to see her old friend Tracy Burke. Tracy :

A chance team-up with Stark against War Machine (Parnell Jacobs) led Danvers to start admitting that she had a problem. But she still framed it as social drinking.

While responding along with her buddy Wolverine (James Howlett) to an attack by Powerhouse, Warbird once again made everything worse by being drunk as a skunk.

While in New York City to negotiate book rights, Warbird was briefly kidnapped by the Doomsday Man. But the Wasp (Janet van Dyne) spotted this, and the Avengers thus came in as Carol freed herself. Justice (Vance Astro) nearly crippled himself taking the Doomsday Man out – to prove his worth.

Warbird later got into a fight near Seattle with Golden Blade and Sapper. The two space adventurers were space raiding US Navy installations. This turned into another accidental team-up with Iron Man.

Warbird fought well, but got reckless at a key point due to alcohol. She was nearly killed in the explosion of Sapper’s energy reserves.

Hello, my name is Carol…

Carol admitted that she needed help. She agreed to let Tony Stark act as her wingman. She did stay dry for weeks.

Stark insisted that she needed a more comprehensive support structure such as Alcoholics Anonymous . However, the fiercely self-reliant Danvers refused to take that step.

While she helped Iron Man contain a chemical fire, Danvers discovered that she could absorb the heat. This seemed to make her stronger.

As she ran into a writer block for her next novel, Danvers resumed drinking. That was despite Burke’s and Stark’s efforts. After a clash with Stark, she entered a full alcoholic blackout. The enraged Warbird kicked Iron Man through the wing of a jetliner.

… and I am an alcoholic.

Though she managed to help save the plane from crashing, she had no recollection of her blackout. Danvers had to be hospitalised for severe alcohol poisoning.

By the time she woke up, the invincible giant robot Ultimo was threatening Spokane. Rushing out of the hospital against all advice, she experimented with draining electricity from a power main. This restored her, and she was invaluable in helping Iron Man save Spokane.

In the wake of this battle, Carol made the leap. She started attending Alcoholics Anonymous meetings in Seattle with Stark.

Her recovery went well. Presumably her enhanced physiology, and the ability to absorb energy to feel stronger, helped. 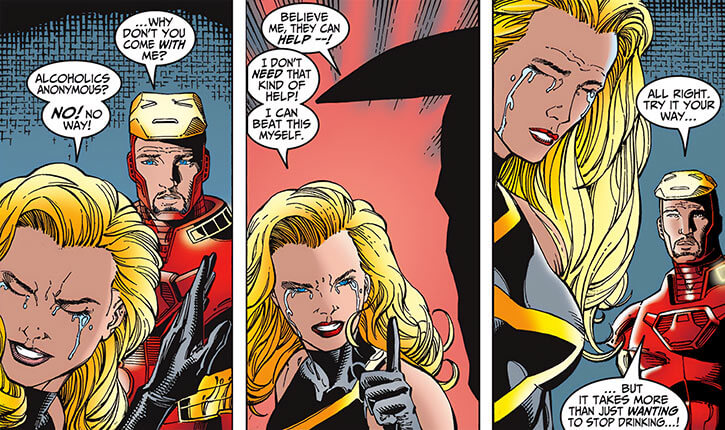 Pretending to be Captain America, the Taskmaster then assembled a small team of ex-Avengers. Beyond Warbird there were Silverclaw (Maria de Guadalupe Santiago), Ant-Man (Scott Lang) and Captain Marvel (Genis-Vell).

This team soon realised that they were being duped. But not in time to avoid making it look like the Avengers were harassing the Triune Understanding cult.

Warbird then lawyered up, hiring Foggy Nelson. She told the Feds that she had been behind the near-crash of the jetliner, and was willing to face the consequences.

A deal was hammered out so she’d serve with the reorganising Avengers rather than go to prison. The roster also included :

During the so-called “Contest of Champions”, numerous super-heroes fell into a Brood trap disguised as space gladiators contests.

In the end, a Brood queen took over Rogue (Anna-Marie NLN) and absorbed a boatload of powers from the combattants.

However, Warbird attacked – if only so she’d get to punch both Rogue and Brood royalty. She prevailed, as her opponent lacked experience with her many powers.

Rogue recovered her free will as Warbird was evacuating her, and Carol took a first step in forgiving Anna-Marie.

Warbird and the rest tackled such crises as :

During this crisis, Carol learned how numerous Kree had been turned into Ruul, a new super-species bent on universal conquest. This was the culmination of a plot by the Supreme Intelligence, which had led to her capture back in 1998.

Warbird also agreed to let Rogue touch her to temporarily gain her knowledge of the Kree language and military procedures. This decision was instrumental in saving Earth from being taken over by Ego the Living Planet.

But as it turned out, many of the crises the Avengers had struggled to handle had been engineered. And to Carol’s dismay, the men working to exhaust the Avengers hailed… from Limbo.

Afterwards she’s wearing her black Ms. Marvel costume, complete with the red sash, the stylised bolt across the torso – and the mid-thigh heeled boots that so impressed little Kamala Khan.

Early on, Carol still manages to pretend that she’s fine. However, she soon starts falling apart.

By that point she appears to be in constant emotional (and perhaps physical) pain. Given her bold personality, this pain makes her aggressive, cranky and liable to lash out against anything she’ll perceive as an aggression.

She also quickly becomes an alcoholic. In her case, she reaches for the bottle much like a person in great pain needs morphine. She’s hurting badly enough that she can’t face challenges without booze, *right now*.

Once badly drunk, Carol is again mired in her childhood issues. She becomes even more competitive. And she assumes that everything by everybody ever is an attempt to keep her from showing what’s she really worth.

She becomes highly aggressive, paranoid, and will attempt recklessly overconfident stunts to show how tough she is. Which will miserably fall flat – since she’s so drunk she couldn’t hit the broad side of a Skrull.

Though it doesn’t make for a likeable character, this part of Busiek’s characterisation rework is where the grit and anger of the later DeConnick characterisation is born. Previous versions of Carol could be brash and blunt. But — except for the aftermath of the colossal misstep with the Marcus storyline — it was too early for a female character to really show anger.

During that span of her life, Carol’s competitive nature and pride turn against her. But she eventually forces herself to accept help and move on.

As she rejoins the Avengers, Warbird acts businesslike and mission-focused. This is to cope with her recovery from alcohol abuse.

If she can smell booze (say, in a bar) she’ll feel stressed and confrontational. But by this point she’s in control of her reactions. So she’ll channel that tension toward something useful.

Carol gradually acts less reticent and less exclusively goal-oriented as she regains her confidence. She also recreates bonds with the Avengers.

This starts with old friends such as the Scarlet Witch, the Wasp and the She-Hulk. But she also creates an early rapport with Triathlon, and helps Vision experiment with more human downtime occupations such as sports and movies. She also mends the bits of tension left between her and Steve Rogers after the court-martial.

Carol voiced her approval when the Avengers had a majority of women, during the span where Jen Walters replaced the Vision. In her view, this milestone had been far too late coming.

Drawbacks:
A SIA toward Alcohol, which gradually goes into remission as this Subplot recedes.

As usual, we don’t maintain rigid stats continuity from one writeup-in-a-series to the next. If something isn’t demonstrated it could vanish from the character sheet. Unless that’d be weird even by comics standards.

This is especially true in Carol’s case, given the memory losses and tamperings she went through. We can never be sure what she remembers. 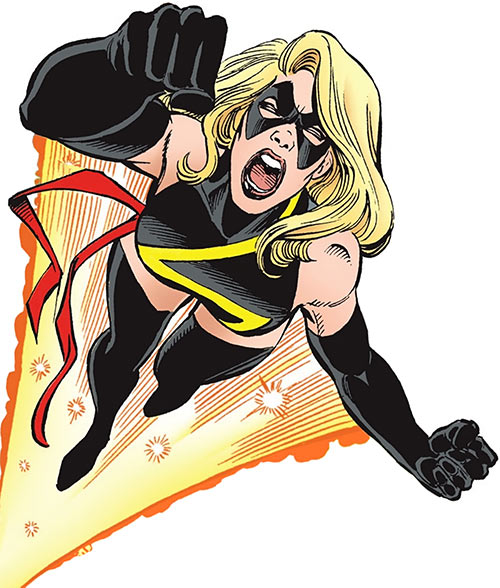 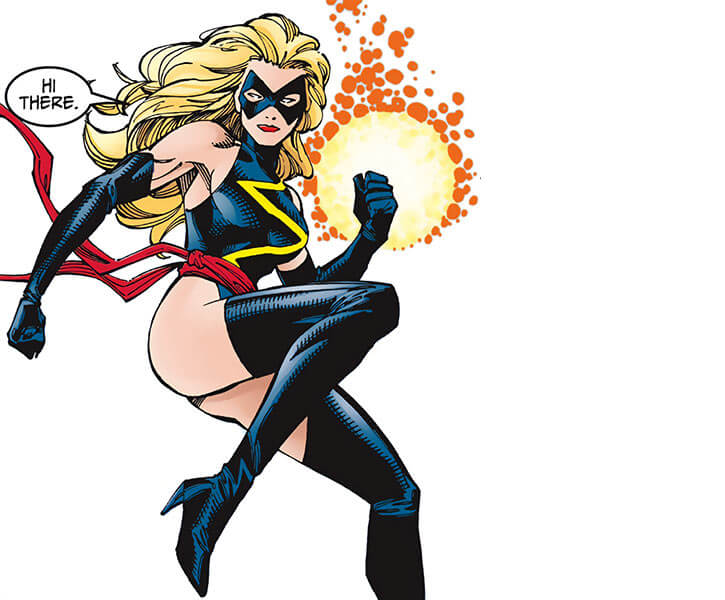 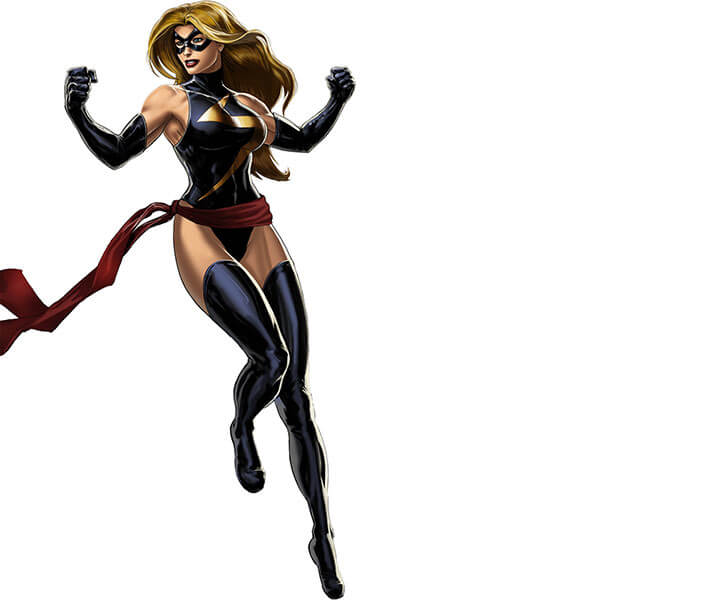 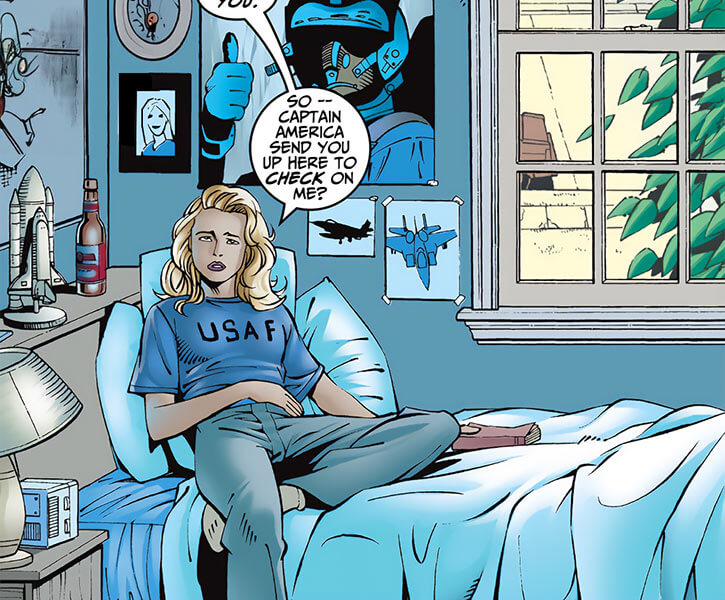