First, some background. Decades before Resurrection Man, Duncan Pramble discovered the secret of “liquid light” which gave him his incredible powers.

At first, he had hair (black) as well as his moustache. His costume would change with his powers.

Apparently, this started in COTU#14-15 (which I don’t have). The power he gained was the ability to come back to life with a different set of powers whenever he dies.

Jumping off a cliff, he “died”, and gained powers. First, he gained powers with which he “could rule the sea”, or so I’m told (in DC Heroes RPG terms, perhaps Water Control, Water Freedom, Swimming ? Just a guess). Then he swam into a depth charge, and “died”, gaining flight (and feathers).

We see him in this form in COTU#24. Pramble has developed pellets (which he carries in a bag) which allow him to change to new forms at will. Of course, when he changes his powers, he loses his super-intelligence. The red pellet changes him into a being of pure energy : basic stats + Lightning: 12 and Energy Being: 06 (always on).

A black pellet changed him back into the big-brain form. A green pellet changed him into his “anti-gravity form”. In this form his head and torso both look like round moons, while his arms and legs are made of the same stuff. This form has the powers of Flight and Sealed Systems (he says he could fly to the moon).

He later also becomes a sponge creature (with a Water Production power). Using a mineral from a certain mountain, he is able to combine the big-brain, energy being, and anti-gravity forms : Int 11, Gadgetry: 11*, Genius, Flight, Sealed Systems, Lightning, and Energy Being.

He also has a device with Power Reserve that increases the range on his blast so that it can hit the moon. His plan is to go to the moon and threaten the Earth. However, Prof designed an antidote to the pellets, which he splashes onto Multi-Man, causing him to lose all these powers (except the big-brain ones), and plummet to this “death”.

Multi-Man survives (still in big-brain form), but with amnesia.

In COTU #34, Multi-Man has launched a rocket out into space. This vehicle can fire iron-destroying rays down onto Earth. The Challs find his hideout and battle him and Multi-Woman, until M-W turns on M-M. M-M escapes with the help of a smoke bomb, but she still manages to capture him.

He attempts to destroy her with a built-in explosive charge, only to find that she had removed it. M-M escapes as the Challs destroy M-W. However, the Challs blow up his hideout and finish his iron disintegrator. During this story, he drinks his liquid light serum in order to change forms.

Then in COTU#40, he disguises himself as “Mr. Voodoo”. At this point, he has Shrinking: 2 (Always On) as well as the big-brain powers.

As Mr. Voodoo, he has created a swarm of robot insects. These include a spider with a camera (Recall), flight, and of course, Shrinking (Always On), several bees, some fireflies (with Flash), and some flying caterpillars which are capable of spinning cocoons of steel as well as creating webs with powerful glue on them.

Mr. Voodoo (he has a torso-covering face mask and his limbs are clad in white) has a handgun and a Ray-Gun (with the Flash power). As Multi-Man, he drinks a potion (different from the pellets ?) to become the King of the Robot Insects. As such he had a weird looking insectoid form with Flight and maybe Telepathy (only on robot insects).

Then, in COTU#42, he joins the LoCH. When Multi-Man uses liquid light to become a giant, he is a gigantic version of his wimpy self, rather than the normal-physiqued giant that he became in #34.

Then, in COTU #45, he has shrunk even more (no explanation). In addition to big-brain stats, he has Shrinking: 05 (always on) and his BODY is now 01. He also probably has one Omni-Gadget at 08 APS now.

Then in COTU #55, Kra says “How come you’re using that liquid light formula to change your shape, Multi-Man ? I thought you didn’t need that any more ?” to which M-M replies, “True, but my plan’s last stage requires the most difficult change of all for me !”

So apparently, he managed to do away with the limitation of having to drink the living light serum between #42 and #55.

This suggests that he now can change forms at will (use Omni-Power at will), but the liquid light formula might have Power Reserve. He uses it to become an ice being (with Ice Production and Ice Being). However, when he was covered in water, the water froze around him, trapping him.

Then, in COTU#81, (after an adventure in Super-Team Family #10 which I lack), he’s not super scrawny anymore (basic stats plus INT, Gadgetry and Genius). He has built devices that let him grow quite large (Growth: 13) and teleport (Teleport: 08). While Grown, he survived an atomic blast.

When his devices were shut down, he “died” again, returning to his original Duncan Pramble form (i.e., he has hair again.). He seems to have no powers.

Then, in COTU#84, his powers are discovered. He has Remote Sensing: 12 and Control: 12. He took control of Swamp Thing, and Deadman could not enter Swampy’s body while Duncan controlled him. However, Deadman set up a “short circuit” (touching both Swampy and Duncan). This caused Multi-Man to collapse (“He has no brain damage, but his mind’s gone”).

After the Crisis M-M returned in the JL books, he has returned to his big-brain form. His only power seems to be manic-depressive mood swings. He showed up as well in the COTU miniseries, where he was killed. He later reappeared in the JL books, with no mention of his recent death.

I hypothesize the true chronology is as follows : COTU#84, COTU mini-series, after his death he gains uncontrollable time travel powers, travels back to the JL book time-period, dies again, joins the Injustice League. He then shows up in the DC Holiday Bash III, in prison. Note that in the COTU miniseries, he is back to his black-haired (non-”big brain” form).

He would probably do well to kill himself again to get new (or *any*) powers, but likely has some psychological problems which prevent him from doing so.

When not in “big brain” form, he has black hair and a moustache. He does not have a specific costume, although (before COTU #81+), he seems to gain an appropriate costume with each form change.

In “big brain” form, he is bald and has pointy ears. His size is variable, anywhere from two feet tall to normal height (at which height he seems to have stabilized). His costume consists of a blue sleeveless shirt and briefs, red boots and (blue, red, green, or absent) gloves, and a (red, blue, or green) collar, sometimes with cape.

Pre-Giffen, he was a typical COTU foe, evil but human.

Post-Giffen, he has become even more of a laughing stock of a villain, with severe mood swings.

Skills:
None without Omni-Power, but see below. 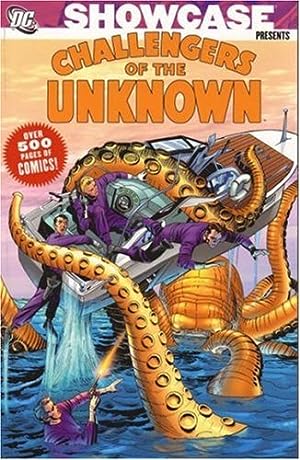