Multi-Woman is reminiscent of the 1958 Attack of the 50ft Woman movie. But then not every giant lady has to be inspired by this movie.

Challengers of the Unknown vol. 1 #34 features the origin of Multi-Woman.

Feeling lonely, Multi-Man creates a giant robot female to be his queen. He believes that with her on his side, the UN will soon accede to his demands. He also uses his liquid light serum to gain new powers, allowing him to grow to giant size (the same size as Multi-Woman). This brew also gives him a more balanced physique (this version of Multi-Man has tiny little arms and legs).

In addition, Multi-Man has gives Multi-Woman the power to change forms just as he can (except without having to drink anything). This version of Multi-Woman does not have a beehive hairdo , but her hair is still blue.

The forms that she demonstrates being able to turn into include:

You shall die by your own womanly creation !

She finds Multi-Man attractive until he reverts to his tiny scrawny form. She turns against him and gets even madder when he tries to destroy her (imagine that !). With the help of the Challs, Multi-Man is able to destroy her, by creating an irresistible trap : a booby-trapped giant diamond necklace.

Being “ adame,” she can’t resist putting on this necklace when she finds it (1963, guys). However the diamond is really “a giant crystal—the target of this ultrasonic unit !” Since she is in contact with the crystal, she begins to shake violently until she blows up.

In COTU#45, the second Multi-Woman arrives, having been built by Multi-Man in secret. This version (as is true for all later versions) has a bee-hive hairdo, but lacks the Omni-Power of the original.

She’s a 30 foot tall giant woman wearing the same costume as Multi-Man. Her hair is blue, and in her second and third incarnations, her hair is in a beehive hairdo.

One would think that Multi-Man would build a docile woman for his ideal robotic companion, but such was not the case. The first Multi-Woman was vain and shallow, only interested in Multi-Man when he was good-looking.

The later Multi-Women have been more of a team player. But they still fend off Kra and Drabny’s crude advances with ease.

Advantages:
Attractive ? (well, Drabney and Kra go nuts over her. I’m not fond of Marge Simpson hairstyles, myself…)

Drawbacks:
Attack Vulnerability: -3CS. The area behind her chest-plate is quite vulnerable. The chest-plate can be opened with an Auto Action if one knows that it is there. But this would require using Scientist to figure out her design flaws.

Self Link (Gadgetry) is what some people might call a Robotic Construction Advantage. Anyone with this power is a Gadget which can be repaired and modified by anyone with Gadgetry. APs represent the highest AP of any ability that the Self Linked Gadget may possess.

Gadgets are of course immune to disease, poison, etc and have no need to breathe. They are also immune to most mental powers unless those mental powers specifically affect robotic characters.

Source of Character: DC Comics (Challengers of the Unknown comics). 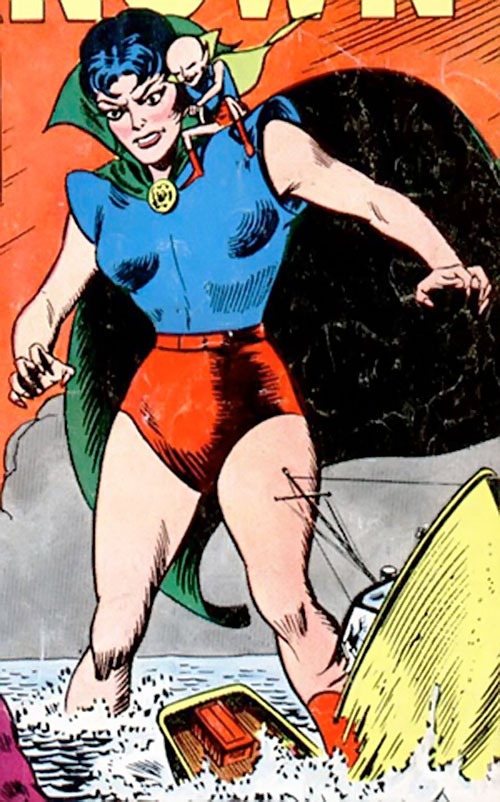