The Muse was a good, charismatic showman and actor. But he never got to really use his talent professionally.

He was also a competent made man, with an unusual proficiency with military-grade weaponry. But he chiefly used these to deter pursuit and create diversions, rather than to slaughter people.

He’s also a good acrobat and a surprisingly strong man.

Richard Perignon was the son of Vincent Perignon – de facto king of the Chicago underworld. He was determined to become an actor, and studied for this. But his father steadily refused him, insisting that his only possible occupation in life was to inherit his mob leadership.

Resenting being forced to work as a wise guy and to ignore his calling, Richie came up with a plan. He would, as the masked agitator the Muse, destroy the Chicago mob so as to be free of his “birthright”. Likely inspired by his own situation, he eventually opted to facilitate the destruction of the old mob by a new, younger one.

Nicknamed “the Big M”, Muse organised he youth gangs of Chicago. These had been previously fighting with each other and being used by the mob. He brokered lasting truces between the factions, gave them some useful intelligence. He also started acting as their guardian angel, using military weaponry to foil the police and rival gangs.

Though he apparently did not kill anybody, the use of grenade launchers and rockets in the middle of Chicago attracted a considerable amount of attention from the police.

Eventually, in the abandoned Globe Theatre, the “Big M” had the youths gangs he had been working with assembled. Muse made his first public, costumed appearance. He made his pitch, telling them the Chicago mob was old and tired, and that it was time to unite and take over.

The gangs were taken aback by his strange appearance and theatrical manner. Yet he managed to convince them after manhandling a rebellious gang leader, demonstrating considerable physical strength.

The assembled gangs spotted and captured the Blue Beetle (Ted Kord), plus his ally the Question. The Muse then threatened Don Perignon in his bed, but the old man reacted poorly and his guards forced the Muse to flee. The elder Perignon personally led a raid against the youths gangs and their costumed guardian angel. 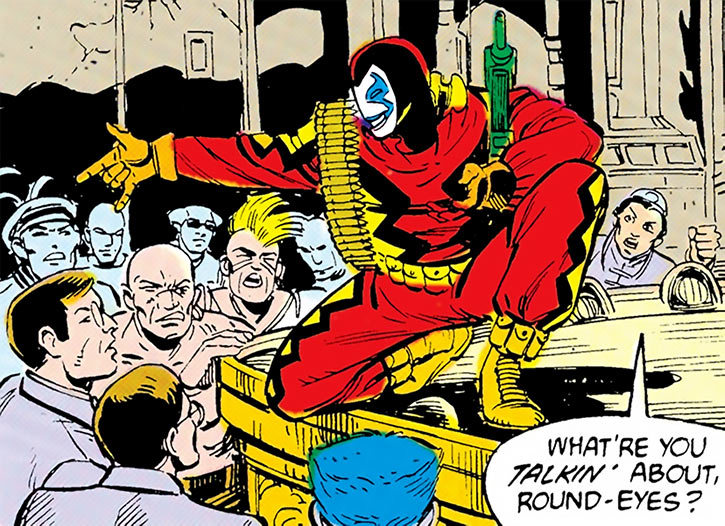 At this point, Richard realised that things were going to get out of hand.

The mob found and surrounded the lieutenants from the various youth gangs in a deserted stadium. But the intervention of the Blue Beetle and the Question turned the situation into a brawl rather than a rerun of the St Valentine Day Massacre. The Muse then showed up and called for the gangs to give up, announcing he would not lead them after all.

One of the gang leaders he had convinced refused to obey. He picked up a submachinegun to kill the elder Perignon. Richard dove in front of his father to protect him and was fatally shot.

He died with a line from Romeo and Juliet on his lips.

Little was shown of Richard’s personality. He was reluctant to kill, blinded himself to how far the situation would go, and loved being on stage and playing a theatrical role.

While he openly expressed his bitterness at his father about his situation, he was still loyal to him.

“And what the devil’s so wrong with that, papa ? Acting is something I’m good at ! It makes me happy !”

“Gentlemen, if you will kindly take your seats… tonight’s entertainment is about to begin ! Permit me to officially introduce myself. I am your host for this evening… you can call me… THE MUSE !”

(His last words) “No papa… ‘’tis not so deep as a well, or so wide as a church door… but ’tis enough, ’twill serve. Ask for me tomorrow… and you shall find me… a grave man. I am peppered… I warrant… for this world. A plague… on both… your houses !’ That’s Romeo and Juliet, papa… act three… scene one…” 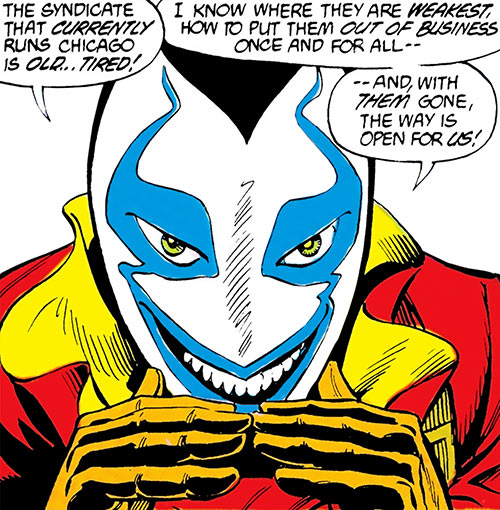