These old notes are primarily intended for readers familiar with the classic Dragon Ball material, and interested in a DC Heroes RPG take on such. Less niche material is something that came much later in writeups.org’s history.

Mutenroshi is the greatest martial arts living human teacher in the world. Impressive, but just the greatest HUMAN. He is a true master in combat (DEX, STR, Martial Artist) and has mastered some special techniques, like air combat (Jumping), Green Tornado (Ritual) or his trademark, the Kame-Hame (Energy Blast).

He can also summon some creatures like the Gamera (a dwarf size version of the kaiju ), the Phoenix (who died from poisoning) or the Kinton Cloud (Occultist (Ritual)).

Despite of his old age (reeeally old, but his sister is the eldest !) he is still one of the stronger, faster and wiser men alive.

The Mystic Power of Kame Hame

The bioenergy wave known as “Kame Hame” is not only an effective range attack. It can also extinguish fire, perhaps because his first trademark user, Kame Senin (Mutaito had a “part fire and water” ki blast) is a “water related” character (“Kame” means turtle, in fact, I think). Energy Blast (Kame Hame) has a +1FC Bonus due to it.

One thing can’t be took apart of the other, and thus the Kame Hame can be used to suffocate fires only at risk of destroying the thing that is burning. This happened when the Kame Senin tried to extinguish the everburning fire at Mount Frypan, Ox King’s home. He succeeded but the castle and two-thirds of the mountain where destroyed by the blast.

Almost 10 years later the flames engulfed the castle again and this time Goku tried to suffocate them. He had a greater control of the Kame Hame blast, but he didn’t manage to extinguish the fire with it as its origin was magical, this time.

To try to suffocate a fire without damaging whatever is burning, the GM may call for a hard Trick Shot with +4/+3 penalties adding to the EV/RV of the attempt.

With all these modifiers, Illusion and Invisibility have a -3FC Limitation value, Contingency included.

Mutenroshi was the pupil of the great Mutaito, the best one along he who would become Turi Senin. They were both friends, until the evil Satanas Piccolo crushed the world with his reign of terror. Mutenroshi and Turi Senin awaited for the defeated master. He returned with the Green Tornado technique, which served to imprison the monster for almost 300 years.

During his training, Turi Senin discovered techniques, climbed the Sacred Tower and fought in lots of tournaments, winning some times the Great Martial Artist Tournament.

He made himself a name and later retired to his little island, where he instructed some pupils, like Songohan (the older) and Ox Satan. He later became the master of Songoku, Krilin, Yamsha, Ten Xin Han and Chaos.

As part of his feats, there is the destruction of the Moon. But I think he just raised a lot of dust in its surface, so it won’t reflect sunlight for some years and so was invisible from Earth. In later chapters the moon was seen again, until, on DBZ, it was again stated as destroyed.

Mutenroshi looks like an old man with a long white beard (cut in “V” shape), wearing a Hawaiian shirt and palm trees shorts. He is bald and is slim.

When girls are involved, he’s an out-and-out pervert. He’ll do all he can to touch, look or trick them. He’s also a good martial arts master, always testing his pupils with hard work, and, in combat, a crafty and dangerous opponent.

If things go serious, Mutenroshi can be a deadly foe, in a human scale. Against superhumans he would be impressive and surprising, but would not be on par with the heavy hitters.

“I’ll give you my dragon ball if you lift your skirt for me.” 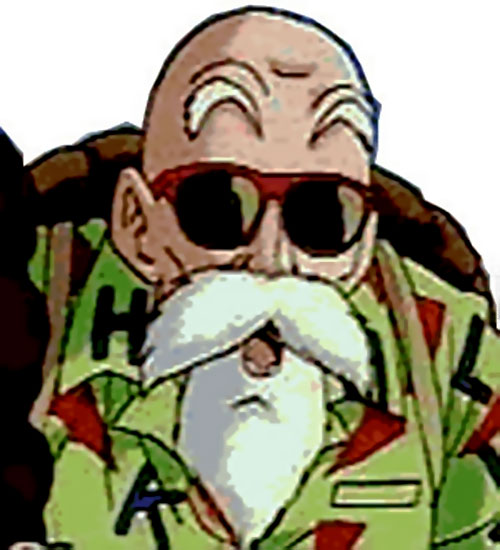