Mysterio’s most formidable abilities include his ability for using special effects, illusions, chemicals and psychology for his criminal ends. He’s a master of all these arts, as well as the science of robotics, having built superbly convincing androids on several occasions.

He recently combined the science of psychology and electronics into creating a virtual cyberworld for captured victims. His goal is to learn Spider-Man’s true identity from them. Without a doubt Beck is a genius in his chosen fields.

He’s a master psychiatrist and sometimes uses the alias of psychiatrist Dr. Reinhart. Mysterio is also an adequate hand-to-hand combatant and weaponer due to his extensive stunt man training. He is able to hold his own against normal humans easily.

Quentin Beck was a Hollywood movie stuntman that moved on to the field of motion picture special effects. He quickly became one of the best effects designers in the business, but he desired more. Beck tried out as an actor, but met with little success.

A friend of his jokingly suggested that he try out his technical knowledge to kill Spider-Man and take his place as a popular crime-fighter. Beck, fascinated by the idea of duplicating Spider-Man’s feats, moved to New York and studied everything about Spider-Man in detail.

Beck, along with the Tinkerer, created androids resembling space aliens. These performed crimes to reel Spider-Man in. Spider-Man did show up and defeated Beck, who managed to get away. Spider-Man was still convinced he had just fought space aliens.

After a brief prison sentence Mysterio resumed his criminal activities. He joined the so called ’Sinister Six‘ (which was composed of Spider-Man’s foes Dr. Octopus, the Vulture, the Sandman, Electro and Kraven the Hunter). The Sinister Six were also defeated by Spider-Man and Mysterio went to prison again. 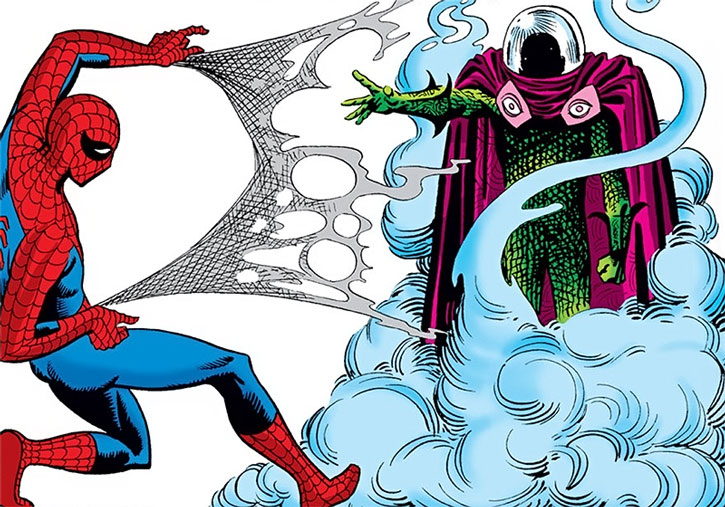 During this prison term he learned the techniques of hypnotism and sleight-of-hand. Once he was free he attempted to drive Spider-Man insane using techological and psychological weaponry, but he failed again, and went to prison for another term.

When free again, he teamed up with the Wizard in order to kill their archnemesises, the Human Torch and Spider-Man. In a combat set in Hollywood they failed and were sent to prison.

During this sentence he revealed many of his secrets to fellow inmate Daniel Berkhart, who upon his release became the new Mysterio. In gratitude, Berkhart attempted to destroy Spider-Man, but failed and was jailed.

Beck himself, created the illusion of his own death in prison and successfully escaped. This time he kept a low profile as the psychiatrist Dr. Ludwig Reinhart. He then engaged in behind-the-scenes manipulations of a nursing home. There he learned of a large fortune that had years ago been hidden in the home of May and Ben Parker.

Mysterio, now working for profit instead of fame, became obsessed with finding the money. He failed at first, but was certain that May or her nephew Peter Parker (alias Spider-Man) knew the location of the money. Again using his earlier bogus aliens, he fought Spider-Man and was again defeated.

Mysterio has since escaped prison several times and been defeated in his various schemes equally many times. Quite recently he pitted his skills against the crime-fighter the Daredevil and when he was defeated he managed to perform the illusion of committing suicide convincingly.

Later, he returned to plague Spider-Man in an elaborate plan. He kidnapped all of Spider-Man’s known friends (including May Parker, Peter Parker, Flash Thompson, Mary Jane Watson-Parker etc.) and put them into a virtual world without them knowing it.

His plan was that there, feeling safe, someone of them would reveal the true identity of Spider-Man, which they had to know, and monitoring their activities he would learn of it.

The plan failed when the whole virtual world was changed by the thoughts of Flash Thompson (into his ideal world) and Peter Parker realized it was all wrong. Mysterio, of course, escaped to plague Spider-Man another day.

Mysterio is man of average height and built. Mysterio’s costume is a tight full body costume in dark green covered with black horisontal and vertical lines crossing all over. His boots are light green in color and include gas projectors beneath the feet.

His gloves have the same color and include strange rectangular formations with intercrossing circles (looks like he has punched his fist through a cube). 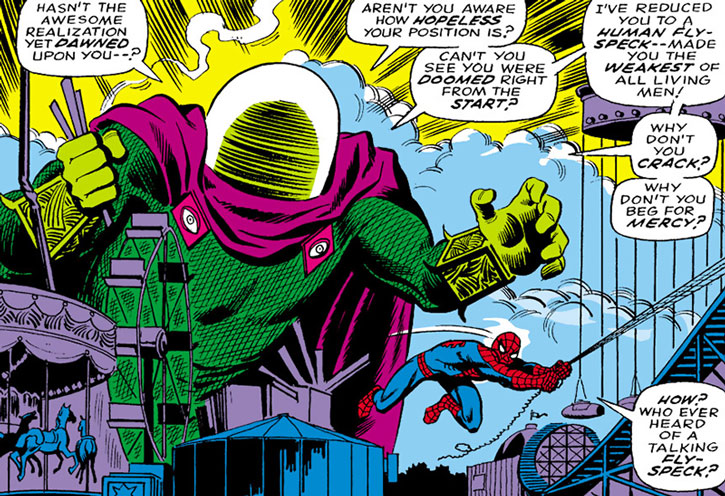 His upper attire is no less eye-striking; on his head he wears a white non-opaque bowl and on his back a long, purple cloak with two scarlet pieces resembling an eye in a quadrate box on his chest pinning the cloak. While pitting himself against the Daredevil he had a white and black costume, but has since returned to a version of his original one.

Mysterio desires drama and wealth above all. His desire for dramatic effects and entrances is so great that his crimes always involve heavy amounts of it. He has used two different methods of operations:

Then while his victim doubts his own perceptions, impairing his ability to reason and act effectively, Mysterio strikes. Being a dramatic guy, he then, of course, puts them in a nasty death-trap and leaves them to die.

The other method, while being too boring for Mysterio in the long run, is to psychologically manipulate victims, for example elders, in order to get access to their money. Much of Mysterio’s resources comes from such sources.

Mysterio is mostly silent in combat, letting his machinations and illusions talk for him. Yet when he appears to be in a leading position he won’t miss the chance to threat and gloat.

Although defeating his opponents might be done in easier ways, he prefers the use of drama, death-traps, illusions, chemicals and psychic manipulation instead. He enjoys the thrill of being a villain, and even once tested his abilities against Daredevil, convincing him that he had committed suicide in the end when he appeared defeated. 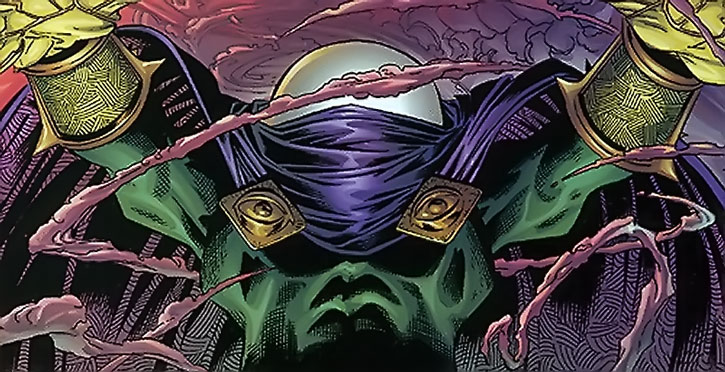 Since his main defeats has been at the hands of Spider-Man he often plots revenge against him as a first choice. Since he’s an intelligent man his plans are rather elaborate, but he trusts his illusions so much that he will have no back-up plans at hand, only an escape plan.

Occasionally, he teams up with other villains, but demanding to be at the centre of attention, he commonly teams up with ordinary thugs. When the superhuman population in New York increased in recent years, he has more left his plans of defeating Spider-Man and put more emphasis in profit-related crimes.

Mysterio would be a rival of the stunt man and hero Blue Devil, pitting his skills in a deadly manner against him. Indeed, Blue Devil could entirely replace Spider-Man, so that Mysterio was one of the Blue Devil’s greatest enemies.

Mirror Master III would likely have been one of Mysterio’s trainees.

We are the robots

Bonuses and Limitations:
Radio Com works only to send information to Mysterio himself. 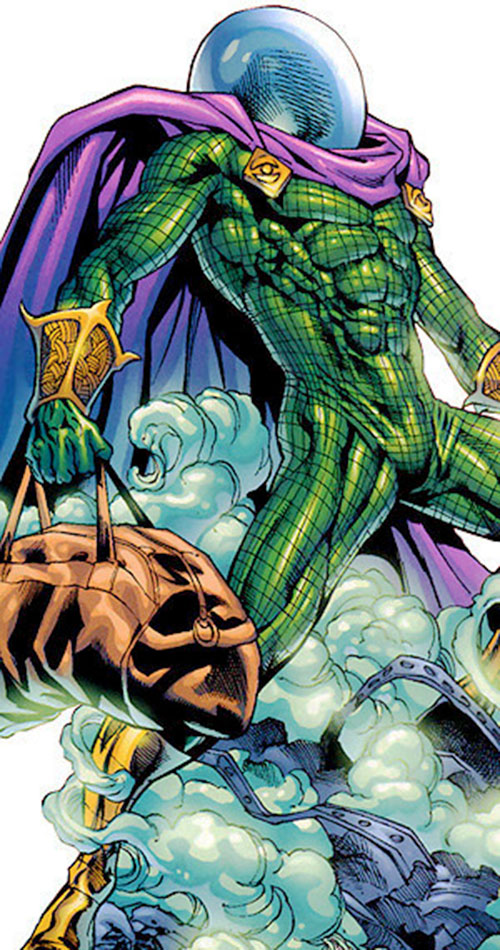 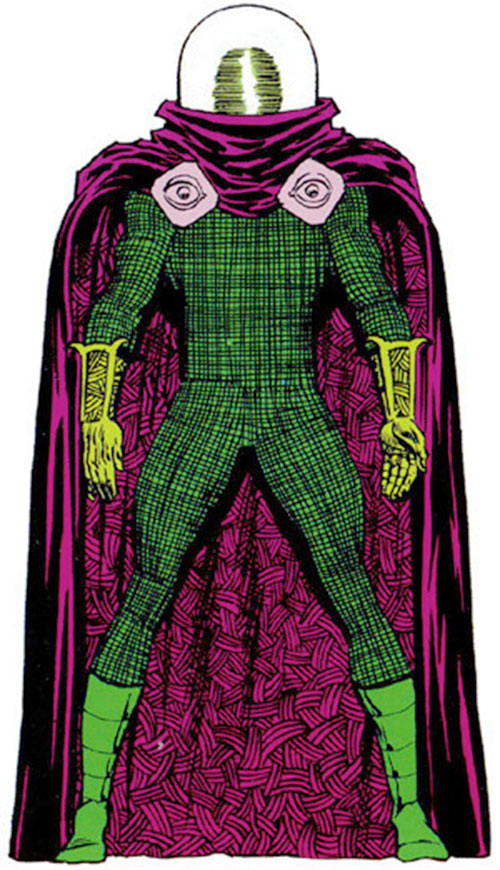 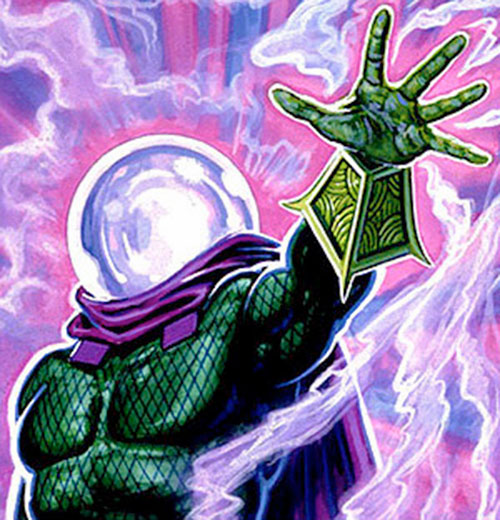 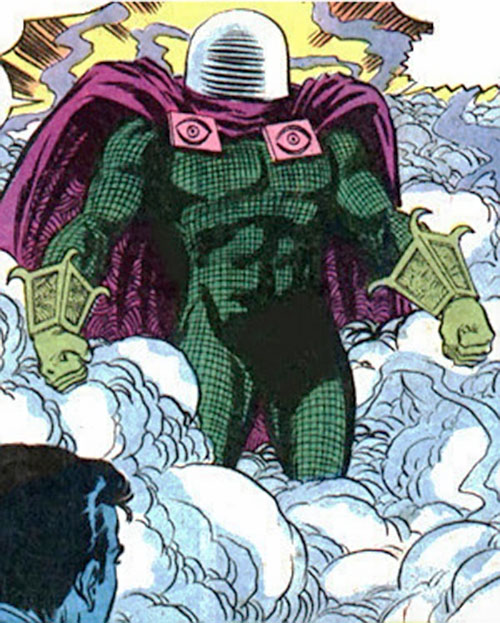 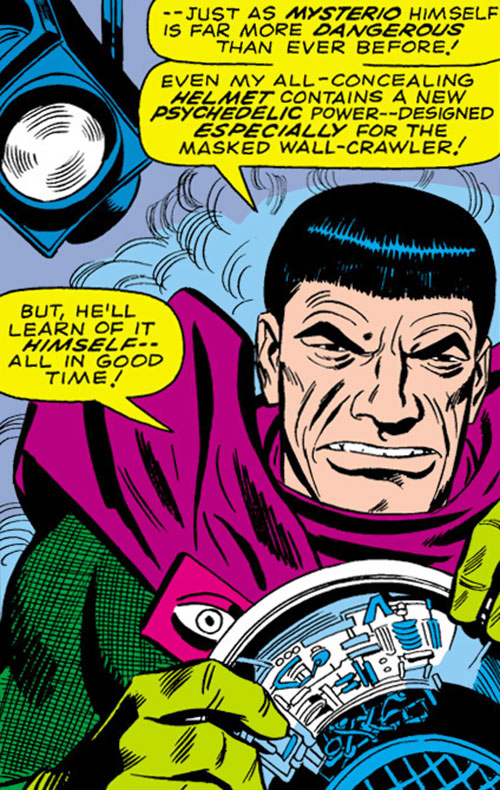 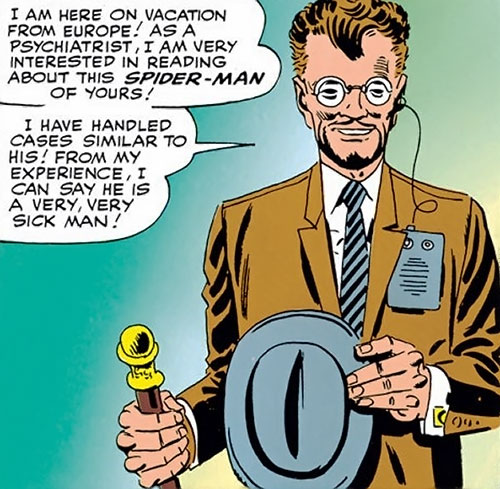