Casanova Frankenstein is a mad criminal genius, armed with a variety of deadly gadgets.

His little fingernail is extremely sharp and apparently potentially deadly. The Claws and Sharpness Powers thus reflects a scene from the final script, but not filmed. The act that Casanova was committed for was slashing the throats of a number of girls (with his little fingernail) while committing rape. His threat against Monica was a lot more credible when this is taken into account… His Powers make his little fingernail able to literally kill (a normal person) with a slash.

Although he is a plotter and a planner, Casanova will engage in fisticuffs when he can; he enjoys making heroes look foolish.

According to Dr. Heller, the Psychofrakulator functions by creating a “cloud of radically fluctuating free deviant chaotrons”. These “chaotrons are concatenated with a synchronous transport switch that creates a virtual tributary”. Casanova’s Disco Ball functions as a “biobolic reflector and focuses the beam up to a satellite relay unit that sends the beam back down onto the target”.

The Psychofrakulator was thought to never to have been capable of being built. The scientists who worked on the complex equations all ended up in the insane asylum. And after 20 years in the same asylum, Casanova got enough from each of the scientists to complete the equations and build the machine. The catastrophic result of the machine’s beam is the distortion of reality.

Anything that the beam wave hits will “warp its cohesion threshold”. On organic material, such as people, the beam has the power to penetrate the synaptic relays which will cause hallucinations to become real, while the brain gets fried from within.

The upshot of all this is – it’s big and it destroys people and things, while warping the remains.

Casanova’s Underground connections consist of almost every criminal gang in Champion City. He can call on:

These were all the gangs that Tony P gathered together to hear Casanova’s plans, and thus are probably trusted insiders. If the needs of the game dictate, one can assume that many unaffiliated criminals and gangs would also respond to Casanova’s call.

Casanova Frankenstein once kept Champion City in a grip of fear. He controlled several gangs such as the Disco Boys, sending them to carry out his evil machinations. After a series of epic battles, the heroic Captain Amazing captured him. Frankenstein was sentenced to be imprisoned in an insane asylum, where he spent the next 20 years.

In the late 1990’s things began to go his way again. He seduced his therapist, Dr. Annabel Leek, who got him a parole hearing to discuss whether or not he could be released back into society. His case would still have been for naught, if Captain Amazing, eager to have a real opponent once more to boost his flagging popularity, hadn’t spoken out on Casanova’s behalf.

And so the menace of Casanova Frankenstein once more threatened Champion City.

The same night he was released, Casanova blew up the asylum, and Captain Amazing duly arrived to arrest him. The overconfident superhero swiftly fell prey to a boobytrap planted by his nemesis, and was captured.

Fortunately, Mr. Furious witnessed Captain Amazing arriving. When Furious heard Captain Amazing was missing, he returned with his team-mates, the Shoveler and the Blue Raja. They attempted to free Amazing, but were literally kicked out by the Disco Boys.

The ‘heroes’ then recruited a number of other no-name costumes to try again. This new, unnamed team harassed Casanova on the roads, attacking his limousine. This minor upset mostly amused Casanova, and he sent his Disco Boys to teach them a lesson.

The Sphinx steps up

The team was saved from near-certain death by the intervention of the Sphinx. He taught them what they needed to know to be a more effective team, and led them in a new assault on Casanova’s place to free Amazing. However, in their ineptitude, they accidentally killed the man they were trying to rescue, and they fled to rethink their strategy.

Angry that “the vermin” had spoiled his plans for Amazing, Casanova sent Tony P out to get hostages for insurance. Either Tony or Casanova discovered the identity Mr. Furious’s girlfriend Monica, and had her kidnapped. Casanova gathered together his old gangs, and explained his plans to destroy the city using a reality warping device.

The Mystery Men burst in on this party (literally), and captured or killed most of the gang members. Casanova tried to use his hostage to hold off the heroes.

This forced Mr. Furious to actually tap into his rage, and face the villain mano a mano. After a brief battle, Furious threw Casanova Frankenstein into the energy stream of his reality warping device, where his body was ripped apart by the forces contained within.

Casanova is all about his own personal style, and it seems to be stuck heavily in the 1970’s. He wears 1970’s styled suits and huge gaudy jewelry, including several large rings on each hand. He also sports a small queue in his hair. He is charismatic enough (or maybe just scary enough) to pull off the look.

Casanova Frankenstein is the epitome of evil. Even Captain Amazing was impressed by his demeanor and presence.

Casanova is motivated primarily by the Power he feels he should wield, but, typically for a super villain, also motivated by vengeance on his enemies. As soon as he was released from the asylum, he did his best to attract Amazing’s attention. He then lured him into a trap so that killing Amazing could be part of his grand plan.

Howbeit, Casanova is also highly overconfident. He refused to entertain the idea that the Mystery Men could be a serious threat until it was too late. Even then, when facing them down, he completely dismissed Mister Furious as a threat, presumably until Furious threw him into the Psychofrakulator beam.

Assuming he found some way to survive the experience (and I can think of half a dozen comic-book type scenarios that would allow this), the Mystery Men just became his highest revenge priority. He would be unlikely to underestimate them again. Casanova doesn’t seem to be the type to make the same mistake twice.

(After he has been released) “Hello… Champion City. Daddy… is home.”

(As Casanova’s limo has pulled up next to the Shoveler’s station wagon)
Casanova: “Hello. I would like a double burger und the large fries.” (to Tony P and Tony C) “Do you boys vant something to drink ?” (laughs)
Shoveler: “We think you’ve done something bad to Captain Amazing. We would like you to tell us where he is.”
Casanova: “Captain Who ? This name does not ring any bells vith me.”
Mr. Furious: “I don’t like your tone, Frankenpuss. Do yourself a favor and don’t punch my clock, ’cause I’m a Pantera’s box you do NOT wanna open.”
Casanova: “It is ‘Pandora’.”
Furious: “Uh, please don’t correct me, it sickens me.”
Shoveler: “For the last time… Where is Captain Amazing ?”
Casanova: “Und a diet Pepsi vith a little bit of ice.”

Casanova Frankenstein is pretty much standard fodder for a supers campaign, being a Mad Scientist out to control the City/Country/World/Universe. He can be used as is. His real uniqueness lies in his personal style.

An 1630 Point Character (Including Gadget fees)

Bonuses and Limitations:
Powers are Innate (+1) and thus cannot be Mimicked, Drained, or Neutralized, but his Claws/Sharpness combo can be taken from him by a determined person by cutting his nails (-1). 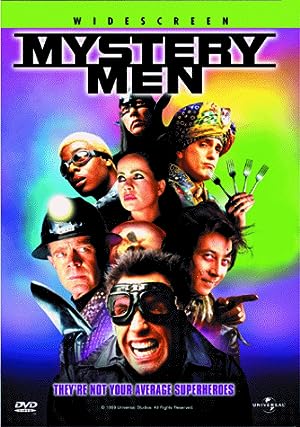 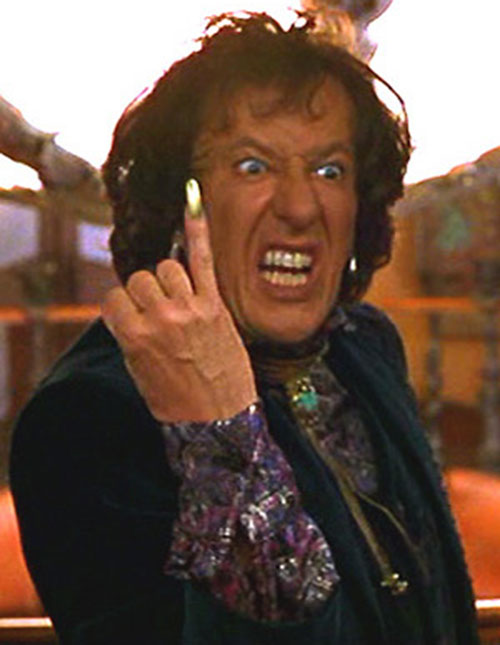 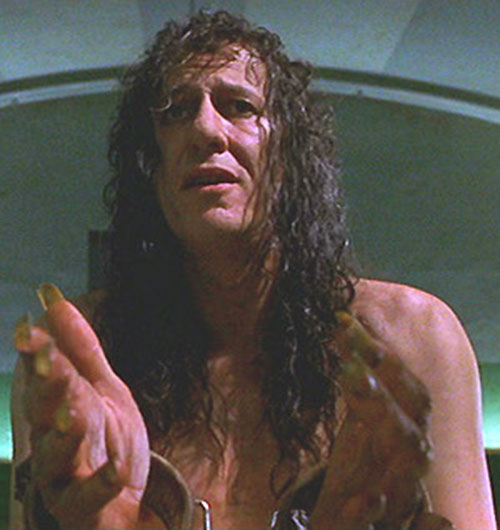 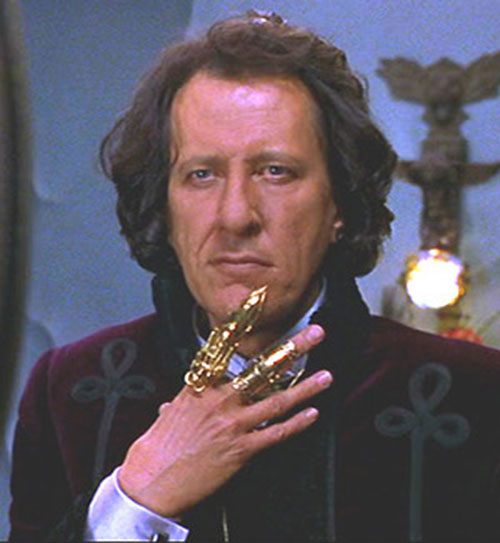