Mystery Men was a 1999 super-hero comedy, depicting a non-team of lamentable would-be heroes attempting to rise to greater heights. It had it’s-okay-but-a-bit-chaotic movie critics, bombed commercially, and was considered awesome by many who wanted to see a super-hero comedy.

The Blue Raja is the Master of Cutlery (though nobody can adequately explain what the two have to do with each other), specializing in forks. He is actually quite accurate with his throwing, which is fairly impressive considering how un-aerodynamic forks really are compared to, say, butter-knives.

What he wasn’t was effective. He mostly used his forks to distract opponents while Shoveler and Mister Furious tried to take them out. This usually resulted in one of his teammates getting a fork in the rear end.

After a modicum of training under the Sphinx, Raja suddenly became much better and more effective with his fork-flinging. He now used them to disarm opponents, and could even hurl them hard enough to penetrate a marble stairwell to provide Furious with a ladder to chase after Casanova Frankenstein.

Blue Raja also seems to have another almost-power. Although his attempt at portraying a British man for his disguise is actually pretty feeble, it seems to have everybody fooled. At least, nobody ever seems to question it, even fairly perceptive allies like the Bowler.

Blue Raja wears a fairly typical suit, over which he wears his mother’s flowered shawl and a turban (but nothing blue), and, oddly, high-topped sneakers. Jeffery himself is slightly goggle-eyed, and gives the impression of a skinny, geekish man (he lives with his mother, after all).

The Blue Raja was played by Hank Azaria.

The Blue Raja has a rare and beautiful gift, which in its own way is actually quite elegant. Unfortunately, he doesn’t see himself as actually very worthwhile.

He hides his talent from his mother. This is explained in the original script, but was cut from the film. She had such high expectations for him that he feels his being a superhero is letting her down. He also hides his “ordinariness” from the world by using the mask of the Blue Raja, which is as unlike Jeffrey as it is possible to be.

When his mother caught him stealing silverware for use in battle against Casanova Frankenstein, he finally sucked it up and confessed. He was caught flatfooted when his mother was actually thrilled to hear it – she had known he was special all along.

With his mother’s approval, Raja suddenly seemed to gain a lot of confidence. Where before he had been filled with trepidation about the upcoming confrontation with Casanova, he was suddenly ready to go on what was thought to be a suicide mission.

Blue Raja: “I’m a super hero, mother. An effete, British super hero, to be precise. I am pilfering your tablewear because I hurl it. I hurl it with a deadly accuracy. The Blue Raja is my name, and yes, I know I don’t wear *much* blue and I speak in a British acent, but if you know your history it really does make perfect sense. The point is, your son’s a limey fork-flinger, mother ! Hard cheese to swallow, I know, but there it is ! What *will* the bridge club think ?”

The Shoveller: “You’re the master of cutlery. You can’t throw a knife sometimes when someone’s trying to kill me ?”
Raja: “No, I can’t. You can’t use a rake sometimes ?”
Shoveller: “No, I’m the Shoveller.”
Raja: “Well, I’m the Blue Raja. I’m not Stab Man. I’m not Knifey Boy. I’m the Blue Raja.”
Mr.Furious: “You know, that’s another thing…”
Raja: “What ?”
Furious: “You got the turban, you got the cape, you got the little flowery thing going on… You might consider adding a *little* bit of blue in there, somewhere.”
(Shoveler nods)
Raja: “If we could just step out of our *literal* minds for just a moment…”

The Mystery Men (in the movie) are definitely part spoof and part homage to the “mystery men” of early comics history. As such they can be inserted dang near anyplace, but the feel of their movie is slightly skewed… They don’t feel very Golden Age, and don’t fit the humor genre.

The Blue Raja was originally a pretty poor superhero, which I attribute to a few things:

Blue Raja at the beginning of the movie has 1 AP less in all Acting Attributes, his Martial Artist Skill is 03, and his Weaponry (Cutlery) is 04. This massive points expenditure is best explained by Raja having been hoarding HP for advancement.

The Blue Raja’s skills go way beyond Throwing Mastery when it comes to his chosen weapon, the fork. He can perform amazing manipulations, represented by his Skill Mastery, and use his forks in a variety of less-lethal ways. It has not been demonstrated on-screen what happens when he shoots to kill, but it’s probably both hilarious and gruesome.

The Blue Raja was originally a pretty poor superhero. Prior to training with the Sphinx and his baptism by fire against Casanova Frankenstein, he lacked the Improved Aim, Set-up, and Taunt advantages. His AGI, DEX, and FGT were all 1 lower, reducing his skills, defenses, and offense bonuses, and he lacked any ranks in Perception.

To make up for his mediocrity, he appeared to rely heavily on All-Out Attacks, with uneven and sometimes disastrous results. 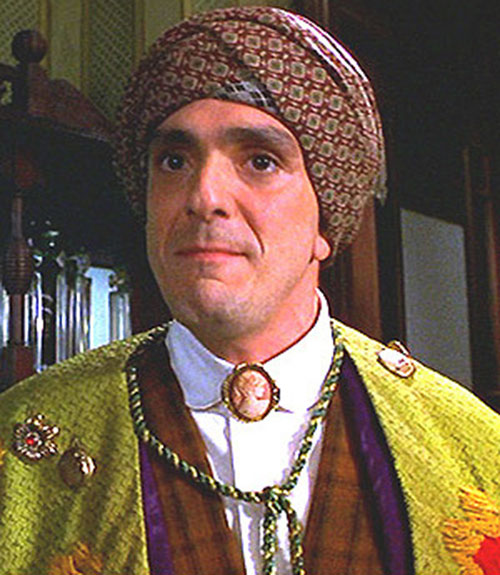 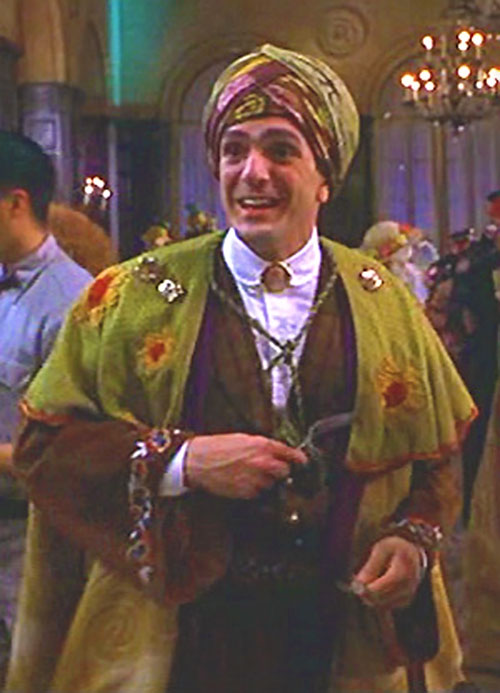 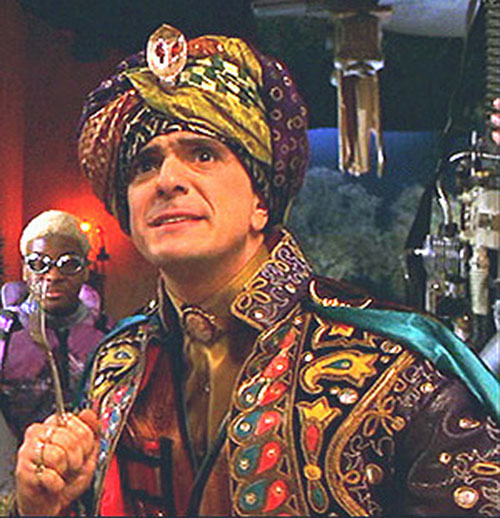