Italy has a long tradition of cinema. Some of it is important, influential art. And some of it is… not. In particular there’s a whole category among Italian cinema that is made of janky, weird, impressively cheap movies copying Hollywood successes with some odd twists.

I nuovi barbari was a 1983 Mad Max-like, with the US release being titled Warriors of the Wasteland. It’s often considered a “so bad it’s good” film. Perhaps its more notable achievement was featuring Fred “the Hammer” Williamson as Nadir.

Mr. Williamson was in many crime and action movies of widely varying quality, including a lot of blaxploitation  movies. Being something of a cult movie fixture, he was also featured in a callback to this era, as Frost the Việt Nam Veteran in From Dusk Till Dawn.

Nadir is an excellent driver, archer and general badass. Being a veteran survivor he likely has access to further unrevealed skills and talents.

Despite the obviously logical difficulty of obtaining explosive arrows he uses them like there is no tomorrow, and he never runs out!

The post-apocalyptic wastes after World War III are dominated by raiders. They call themselves Templars (aka. the Warriors of Vengeance & The High Priests of Death). They have a bad case of hubris and a messiah complex – plus customized, high-tech vehicles and weapons. These vicious psychopaths roam the wastelands, preying on the weak and innocent.

They seem to find great enjoyment in excessive violence and brutality, their position being that the remaining mankind must die for what they have done. The Templars come clad in very odd garments, armor and hairstyles. These trashy bandits regularly employ beam weapons, flame throwers, saw blades, drilling weapons and other futuristic oddities.

Nobody can oppose their great numbers and ruthless leadership. Templars are a true plague on the post-war countryside.

Too bad for the wastelands !

Then there is Nadir, a legendary rider and mercenary of the wastes. Nadir (whose name means low-point), drives wherever he pleases. He will emerge a victor from any trial by combat in search of women, resources and adventure. Men will generally avoid him, because facing him is often pure suicide. But not a few women are drawn to this badass.

There are also other mighty mercs, such as Scorpion. Scorpion is good, but Nadir is better. They are not real friends, but they tolerate each other and will team up for the common good. Meaning the utter destruction of wasteland trash, revenge, mayhem adventures, explosions and the finding of useful resources, weapons and vehicles.

It is the year 2019. A nuclear apocalypse has destroyed almost all evidence of civilization.

The few survivors live under a reign of terror. They live under the thumb of blood-thirsty futuristic counterparts of ancient warriors. This savagely cruel motorized gang of barbarians is called the Templars. The bring death and destruction on anyone who crosses their path (even women and children). Some survivors search for a safe haven, of Templars. 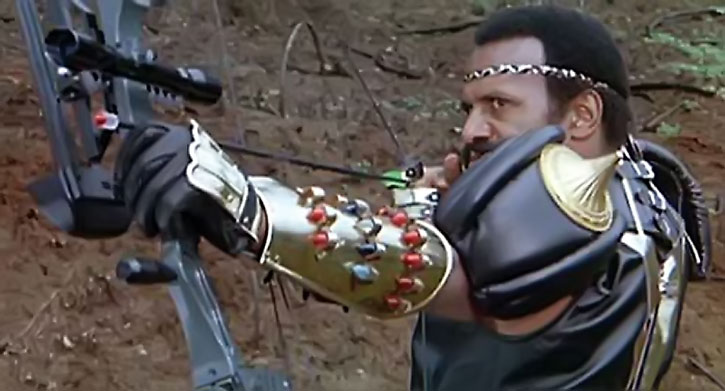 In this landscape also ride mercenaries such as Nadir and Scorpion. Scorpion is a rogue Templar running his own vendetta against them. Nadir is a rider of the wastelands just looking for trouble. He often finds it around Scorpion, who is something of a friend.

When Scorpion is defeated and raped by the leader of the Templars, the One, Nadir helps him escape and then joins the crusade for vengeance and utter destruction of the Templars.

In the end, Scorpion and Nadir stand victorious. But it is revealed that there exists no safe haven for the survivors. Mankind is indeed doomed.

Several funny reviews can be found, such as this one .

Nadir is a large Black man with a bad ass moustache. He usually wears a headband, a sleeveless leather jacket with metal shoulder pads and bracers (w/extra arrowheads), leather pants with a metal codpiece, heavy boots and other futuristic barbarian apparel.

He often runs around – when he’s not driving around with his combat machine – with his large, metal longbow ready to fling explosive targets at vehicles and people alike.

The attitude and arrogance is what makes it all work!

Nadir is a cool dude that takes crap from nobody. When not driving his car, he runs around with a nice bow, shoots arrows with explosive heads, and is even up to speed on screwball yoga practices. He is not ashamed to practice fruitcake mumbo-jumbo as long as it helps in getting laid (which it does).

And yeah, he uses the telescopic sight on his longbow to check out babes.

Nadir has something on an ego issue. He worships himself and continuously assures his buddy Scorpion that he is better than him, occasionally showing up just to prove the point (he does this to others as well). More than once he has patched Scorpion together again just so he can do it again later to some gloating.

In fact, he regularly seems to track Scorpion down just because he expects some action around him and his vendetta against the Templars. He sometimes takes on the role of a mentor even.

Is there some sort of man-crush going on here or is it a case of a very disturbed ego?

Naturally he blows up Templars wherever he sees them. He spots a smile just as he is about to outclass someone, and takes his cool time to do his deeds. Sometimes he strikes as a mysterious stranger from a distance since it amuses him.

He thought that the right thing to do was to help Scorpion redeem himself even when that help cost the lives of dozens of innocent holocaust survivors their lives.

He talks in a staccato-like tough guy manner, sprouting lots of non-sensical clichés (such as rambles about the power of victory!) and laughter. He’s supposedly an anti-hero, but we cannot know for sure!

“They are people from a sect. They believe in something called… God.”

[Having just saved Scorpion and gloating] “You always seem to be getting yourself into trouble, Scorpion. Possibly you need my assistance.”

“Here lies the great Scorpion, in pain, victim of the big, bad queers, the Templars ! All you had to do was ask : ‘Nadir, I need your help’. You’re not so great now, Scorpion.”

“I’m doing this for yours truly… a good fight is always exciting to me !”

Nadir [pointing at a woman aiming a gun at him] “This one in love with you too ?”
Scorpion: “That I didn’t ask her. I just asked her to blow your brains out… if necessary.”
Nadir: “Really ? What are your plans now, Scorpion ?”
Scorpion: “Whatever they are they don’t include you.”
Nadir: “That’s a pity. It looks like you’re having so much fun. You know, that’s your defect, Scorpion. You don’t understand the power of victory !!”
Scorpion: “You know what yours is ? You take the idea of being the strongest too seriously.”
Nadir: “Ah, well it’s easy to take something serious that’s true.”

Well, in any good post-apocalyptic game there is always room for yet another nutcase. Just bring him in, yet another alpha male in the apocalyptic wastelands!

Although it is never displayed he can likely also effectively use regular firearms and energy weapons and performs adequate unarmed combat (all given above). This is so because, frankly, without these he would never have survived this long.

He has been given Lightning Reflexes since he was always supposed to be much faster than Scorpion (given although it was not clearly shown). If the GM wishes to highlight the mentor aspect of the character he might be given the Leadership advantage to model this (not given above).

Source of Character: I nuovi barbari (The New Barbarians aka. Warriors of the Wasteland aka. Metropolis 2000, 1982) by Enzo G. Castellari, character played by Fred “The Hammer” Williamson. 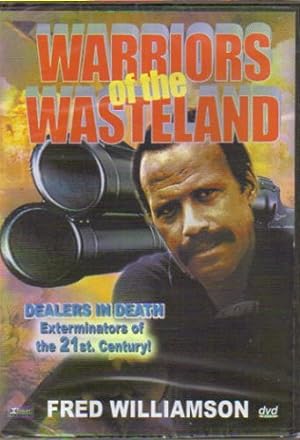 Warriors of the Wasteland 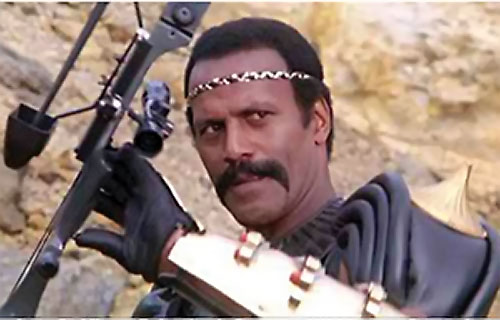 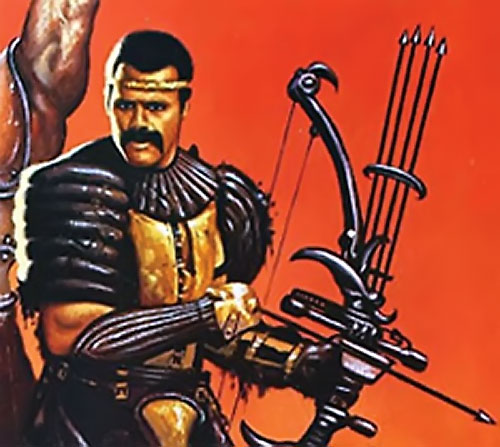 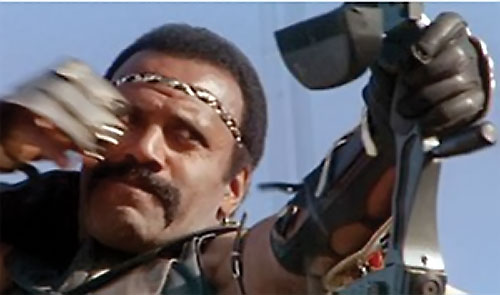