Like her cousin, Namora has a high level of superhuman strength, durability, and speed, above that of normal Atlanteans. She has a longer lifespan that humans enjoy, and her body is adapted to life under the water and above it.

(Details of her time with the Agents of Atlas can be found in the team’s profile.)

The daughter of an Atlantean man and a surface woman, Aquaria Neptunia was nicknamed “Namora” in honor of her cousin, Namor. During her early adolescence Namora moved to the Atlantis’ Antarctic capital with her father and became a playmate of Namor.

A few years later, Namora and her father relocated to a northern colony and were absent when Atlantis was increasingly drawn into surface activities.

In 1946 Namora’s skin, formerly the typical Atlantean blue, faded to a Caucasian tone, and her father revealed her half-human heritage. Shortly thereafter they returned to Antarctic Atlantis.

In early 1947, the Brockton Gang — surface criminals led by Stoop Richards — invaded Atlantis in search of treasure, killing Namora’s father. Namor and Namora took vengeance on Richards and his underlings.

Namora accompanied Namor on adventures, fighting the schemes of their cousin Byrrah and such surface criminals as the mesmeric Doctor Macabre and the weapon-wielding Viking; on her own she clashed with the Mummy Men of Tut-Ak-Mun and other threats.

In 1955 Namora married an Atlantean man named Talan. The marriage grew strained when she was unable to bear children due to her hybrid nature — and possibly due to her having joined the Monster Hunters on some of their adventures in 1956 — but she persuaded Atlantean scientist Vyrra to implant her with an altered cloned ambryo, enabling her to become pregnant. 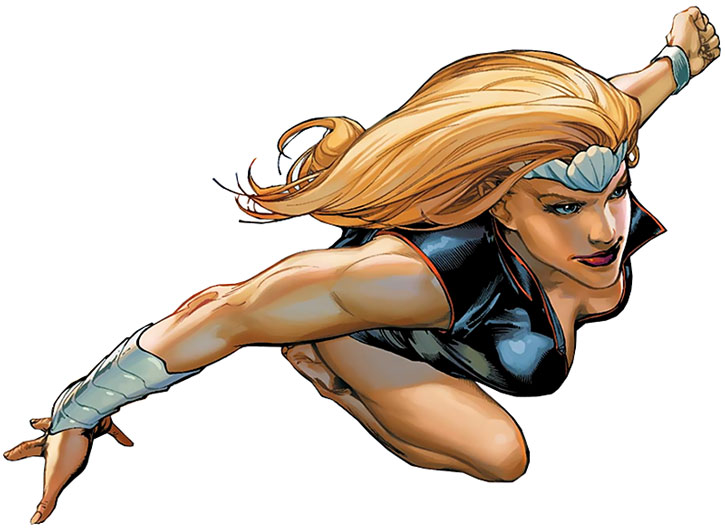 In 1958 Namora’s working with the Monster Hunters brought her to the attention of FBI agent Jimmy Woo. He was assembling a team to rescue the kidnapped President Eisenhower and attempted to recruit Namora. While she was unable to accept, she helped him recover M-11, The Human Robot, laying dormant in the ocean.

Namora soon gave birth to her daughter, Namorita. This was around the time Namor went missing after a clash with the madman Destiny; Namora searched for him to no avail.

In 1961 Namora and her family left Atlantis for the colony of Maritanis. Soon thereafter Talan was killed in an atomic bomb test, and Namora took Namorita to Lemuria.

After several years she became attracted to Lemuria’s Prince Merro. This led her rival, the power-seeking Llyra, to poison her. Namora was believed to have died — although was actually left in suspended animation.

When the G-Men reformed to save Jimmy Woo’s life, M-11 deduced she wasn’t dead and located her tomb. Revived by M-11, the poison was neutralized by the Uranian’s technology, and she joined the team in gratitude. 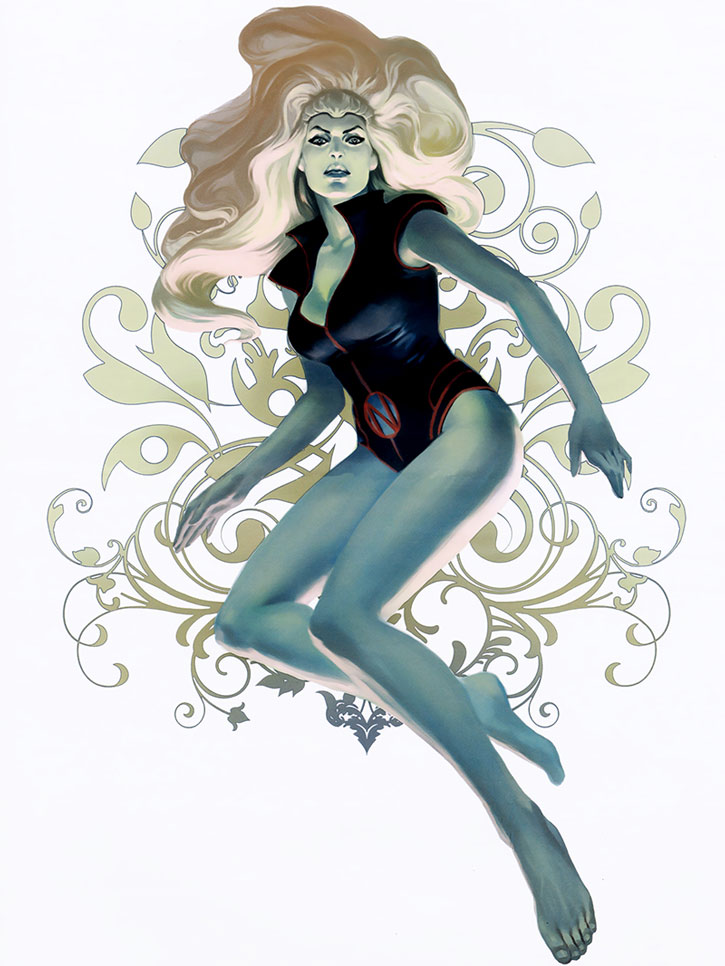 Distraught at learning of her daughter’s fate, Namora was reluctant to return to her own life, although she did reconnect with Namor.

Her grief over Namorita’s death turned to anger at her daughter’s vilification during the Civil War, and Namora joined Hercules, Angel and Amadeus Cho in aiding the Hulk in his attempt to gain revenge for his betrayal.

During her time with the group Namora grew close to Hercules and they discovered the spark of some romantic feelings. She still felt something for Namor though, so it didn’t go any further.

When they learned Namor was part of Osborn’s Cabal, Namora led the Agents to Atlantis to try and convince Namor to turn against Osborn. Their old feelings for one another resurfacing, Namora began to seriously consider leaving the Agents in order to be with Namor.

This lasted until an encounter with genetically engineered defences of which Namor was unaware saw the Uranian read the mind of Namor’s advisor — and Namora’s old friend — Tulem. They learned he’d been part of a secret eugenics program which had seen the possibility of breeding humans and Atlanteans.

After Namor’s birth showed the potential power of the union, they arranged for another to be born — Namora. They planned for the pair to be married, to produce modern gods of the sea, but events got away from them.

Learning the truth Namor and Namora’s romantic feelings for each other cooled, although they remained close.

Regal and strong-willed, Namora is an unrelenting force, letting little stand in her way to do what she believes to be right. Loyal to her friends and team mates, she feels a particular debt to M-11. While not as temperamental as her cousin, she still has a bit of a fiery temper, and an inclination towards brute force solutions.

Namora (Classic)
“I will shed no more tears ! There’s work to be done ! Let me aid inavenging my father’s death, and that of all our people.”

Namora (Modern)
“A monarch of Atlantis also stands with you. If you lead us into Hell, then the Devil will face Namora.”

“I am Aquaria Neptuna, the second highest ranking royal of the Confederation of Atlantis. You are in my ocean.” 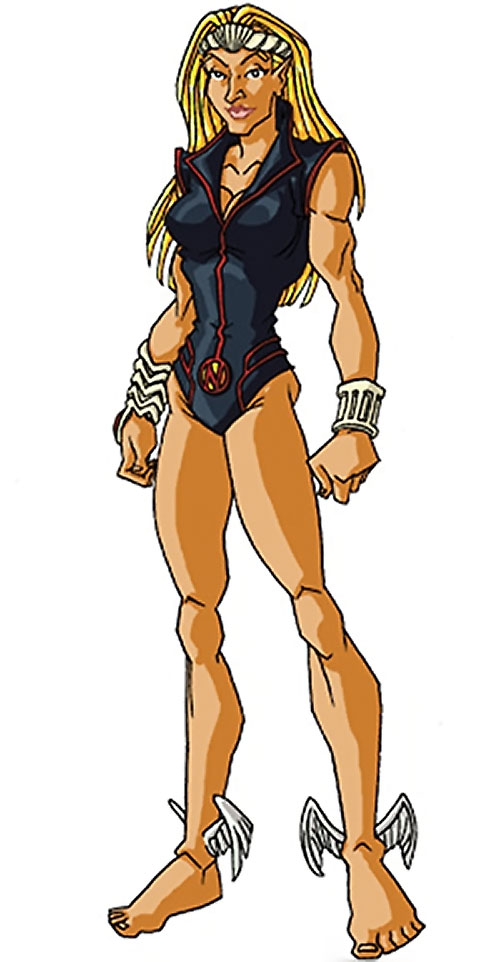 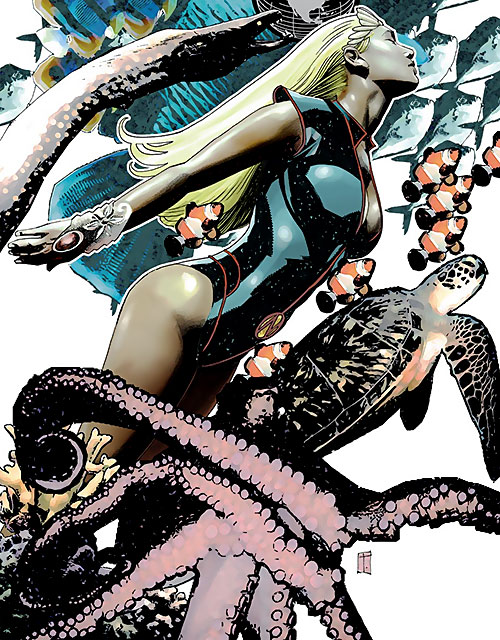 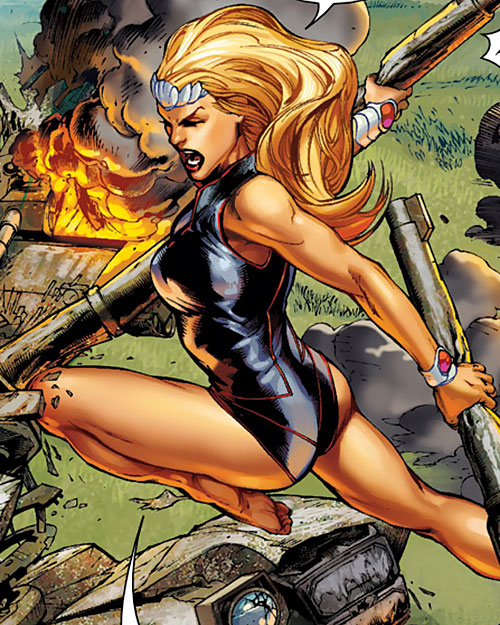 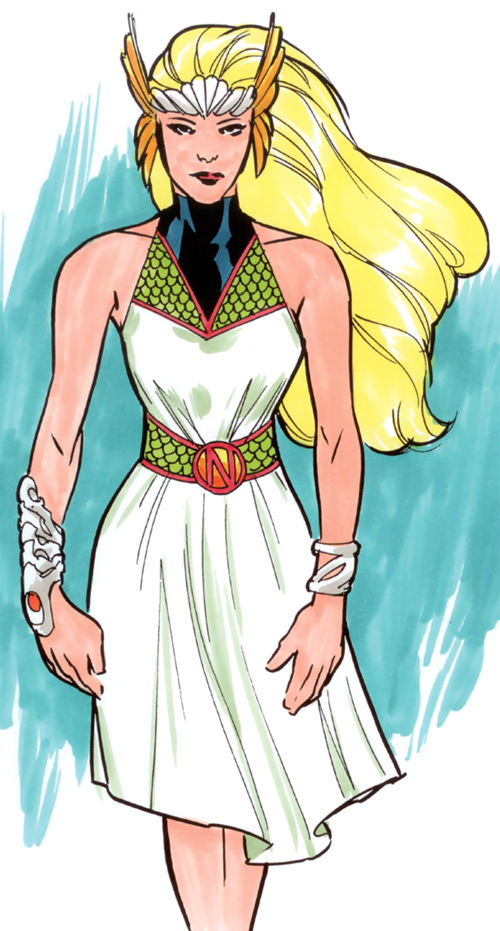 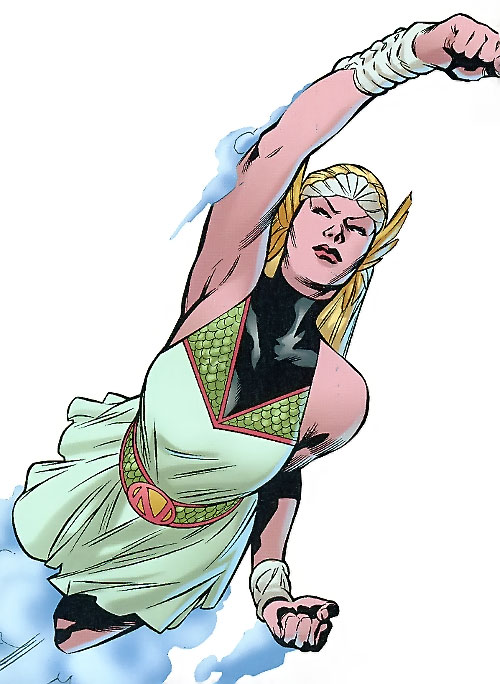 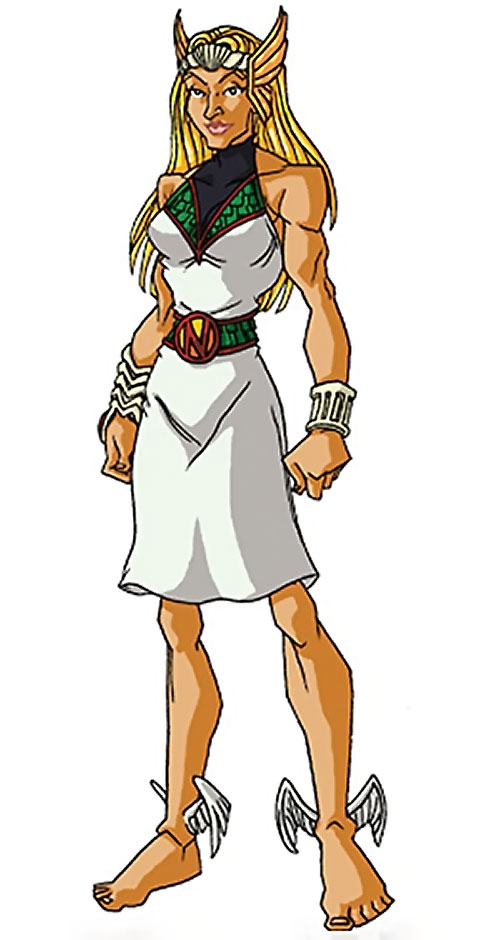