Nautika’s powers’ origin is not well known. Anyway, she has strong ties with water. She’s as well at ease in the air or underwater. She can fly and project strong lightnings of bio-electrical energy.

Apparently, her StormWatch training included a good demolitions package. She looks like an authority on the subject.

She joined StormWatch at the same time as Battalion and Flashpoint, drafted by John Windsor. She was a full member of the original StormWatch Prime, along with her future husband Sunburst. She married Sunburst just before their tragic mission in Kuwait.

During the Gulf War, she, Flashpoint and Sunburst were captured by the MERCs. The rest of StormWatch Prime (namely Battalion and Backlash) thought they died in the explosion of a bomb. In actuality, the prisoners were sent to Gamorra, where the Daemonite Lord Defile brainwashed them to make them double agents.

They were freed by StormWatch One. Though Sunburst had nightmares about the torture, they did not realise they had been brainwashed. But Nautika did send classified StormWatch data on the WildCATs to Defile.

After their release, their trial by fire was the exposure of Defile’s plot to bomb historical monuments worldwide. Since they worked out well together, they were thought to be combat ready again. Nautika, Sunburst and Flashpoint returned as a team. But the missions they were given involved more investigation than actual combat.

When Flashpoint went on a personal crusade to settle the score with the MERCs, Nautika and Sunburst were sent by Synergy to arrest him. They stopped him just before he could get the story of their capture from Deathtrap.

In the ’Wildstorm Rising‘ episode, Nautika and Sunburst betrayed their team-mates on Defile’s order. They followed Spartan in the Kherubim ship to take control of it. But Sunburst broke free, and Defile ordered Nautika to neutralize him. Sunburst was left unable to walk again, and Nautika fully remembers crippling her husband.

After that, they followed heavy medical treatments to be cleared of Defile’s influence. Nautika was instrumental in restoring Sunburst’ confidence. He could not walk, but he could still fly and fight.

When Bendix reorganized the team after ’Fire From Heaven’, Sunburst and Nautika were promoted to Tactical Combat Analysts. Fahrenheit called upon their explosives knowledge to solve the murder of the former StormWatch rookie Undertow.

She’s a short woman. Her skin is greenish, her eyes completely green and her short hair are dark blue. Her face lacks a nose. Her hand are webbed.

As far as we can see, she hardly breaks StormWatch rules. She trusts her team-mates to watch her back as she watch theirs. She cares much about her husband, even more since she crippled him. 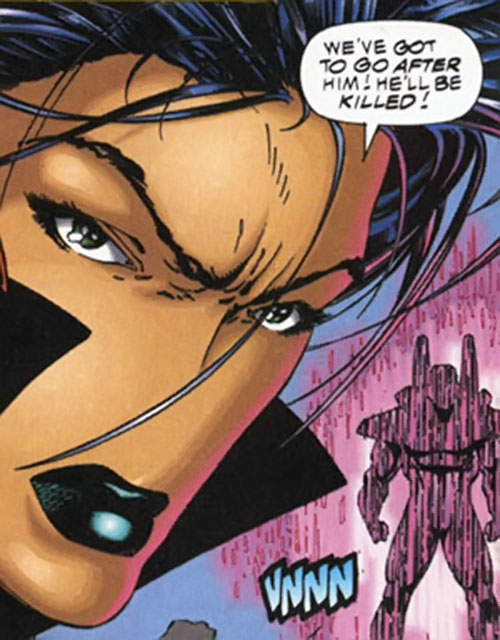