Nebulon is a rather massive creature who can polymorph into humanoid forms with sufficient — though painful — concentration.

Aside from his natural mass and attendant durability and strength, he can fill himself with biospheric energy the same way that Superman is charged with yellow sun radiations and use it for a variety of energy and spatial manipulation powers. He can charge himself up enough to block an enraged Hulk’s fist, take blows from the Valkyrie without much effect, or floor pretty much any Defender with his blast.

His omni-power was used, among others, to Warp the Hulk into orbit (manifested by an energy bubble which took the jade giant up, up and away) and to Shrink a car thrown at him in order to catch it with one hand.

Nebulon is from the Ul’lula’ns aliens, who eventually depleted their home world’s mineral resources. Sent by the planetary government as a scout to locate new mineral resources in outer space, he failed to find anything satisfactory.

However, his travels made him encounter Hyperion II (Hyperion’s evil clone), send adrift in space in a prison after a defeat by Thor. Nebulon freed him.

Hyperion II, who was under the delusion that he was from a microverse destroyed by humanity, talked him into helping him avenge his dead people by using Earth’s mineral resources. He also persuaded Nebulon he had the right to sell him the right to strip-mine the Earth. Hyperion II and Nebulon went to Earth to assemble the Squadron Sinister and make their onslaught.

However, that was the time when Nighthawk II chose the side of angels and joined the Defenders. He went with the group to fight Nebulon and the Squadron. During the fight, Nebulon returned to his actual form. He then had to jump dimensions along with three Squadroners as Nightawk II was about to blast him to charred cephalopod meat.

In the other dimension, Nebulon encountered the Lubderites. He was won over by their existentialist outlook. As a result, he re-dedicated his life to helping humans overcome their own shortcomings. He jumped back to Earth and started the Celestial Mind Control movement, based on self-affirmation and freedom of thought.

Actually, the end result of the CMC was loss of free will. However the sect spread like a prairie fire all over the world.

The Defenders deduced who was behind it, but couldn’t stop him. The situation was made more complicated as the supervillain group known as the Headmen launched their own bid at world domination. Ultimately, the Defender called Doctor Strange convinced Nebulon of the futility of his approach.

At about that time, the Ul’ula’ns government convicted him of treason for abandoning his mission.

Nebulon fled into the ocean and, posing as the Atlantean Lady Dorma, took political power in Atlantis. Then, he had the sea folks rise once more against the surface. The Defenders thwarted him at about the same time an Ul’lula’ns agent arrested him and suggested he commit suicide. This was an honorable way of solving the matter for Ul’ula’ns culture.

Learning of that revolting development, Nebulon’s wife, Supernalia, came to Earth. However, Nebulon had asked the protection of the Avengers, which Supernalia couldn’t hope to defeat alone. Therefore, she sought and gained the help of the Defenders.

Soon both teams were fighting. However the highly ethical Supernalia realized her actions were wrong and chose to commit suicide. Nebulon leaped at her to prevent her dead, but was felled by the weapon she had chosen to kill herself.

Both were buried by the heroes under their last battleground.

His natural form is that of a gigantic six-tentacled cephalopod.

Nebulon was at first as selfless scout out to save his whole race. However, years of finding nothing embittered him. The company of numerous supervillains soon made him look after his own good rather than his once lofty ideals.

Losing those ideals made him empty. Thus, he was looking for something to fill the loss, from desire for worldwide illumination to great egoism.

“I concede ! Your race is beyond redemption !”

Sounds like a classic JLA adventure, doesn’t it ? It could have happened in the 1980’s, and resulted in a JLA vs. JLE fight at the end or something like that. 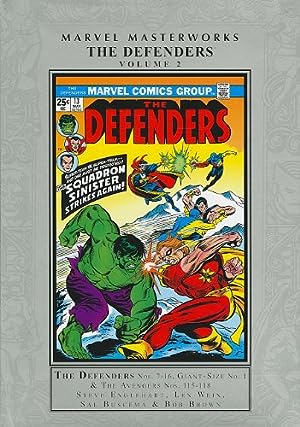 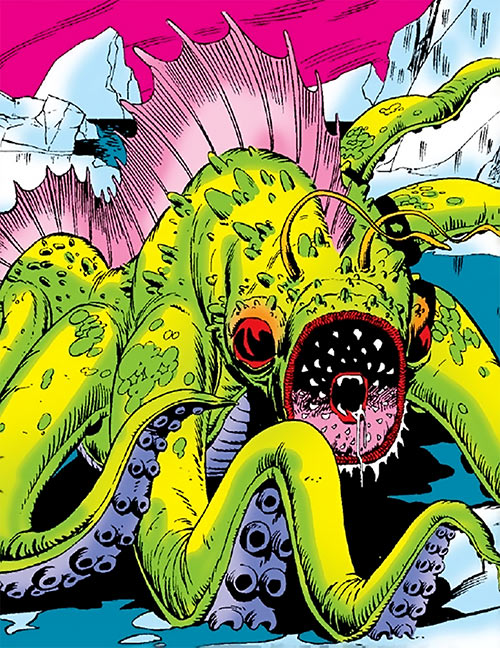