Necroscope is a series of horror novels by Brian Lumley, which started in 1986. The main hook is necroscopy, the ability to peacefully communicate with the dead and share knowledge.

The profile presented here is intended as a model of the Necroscope at a very early stage in his career. It is set just prior to his climactic confrontation with Boris Dragosani in the first of the novels.

(This article being very old, it is shorter and more game-oriented than later writeups.org profiles — Ed.).

Harry has the power of Deadspeak. This allows him to communicate telepathically, but only with the Dead. There are two basic ways that this is reflected in the statistical write-up.

First, he can simply gain historical information. In DC Heroes RPG terms, this is reflected by the High Level Connection with the Teeming Dead.

Establishing a dialogue with a particular dead person is subject to Gamemaster discretion. Some of the more recently dead may be too disoriented to respond. Others may be occupied in their own ethereal pursuits.

The second feature of Deadspeak is that Harry can act as a true medium. As such, he can channel the use of any skill previously possessed by the dead person. This is reflected by the Omni-Scholar Advantage and the Adaptation Power. 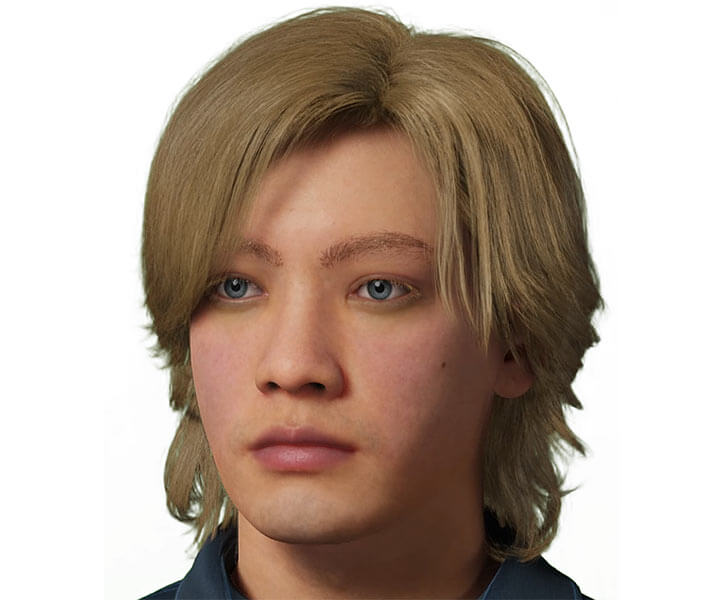 Under extreme circumstances, the Dead will rise from their graves to assist Harry. This is reflected in the Animate Dead Power.

Harry has also learned how to use the Mobius Continuum. This is a dimension beyond conventional time and space, which allows Harry to Teleport to virtually anywhere on Earth.

In later chapters of the series, the Continuum is also employed for time travel and both pre- and post-cognition, but Harry has not learned those skills at this point in time.

Most Automatic Actions within the continuum, as well as AVs/EVs, are based on MIN. For game purposes, consider the Mobius Continuum to be located at a dimensional distance of 5 APs from Earth.

The Gamemaster may allow Harry to use the doorway to the Continuum to mimic the Deflection Power. This represents the summoning of a dimensional doorway to act as a shield. It would be rated at 8 APs.

This is a stunt which Harry developed later, but it is such a natural extension of the way his power works that it could be made available at any time.

Ranged attacks striking the invisible doorway would be deflected into the Continuum, and would appear to normal persons to simply vanish into thin air. 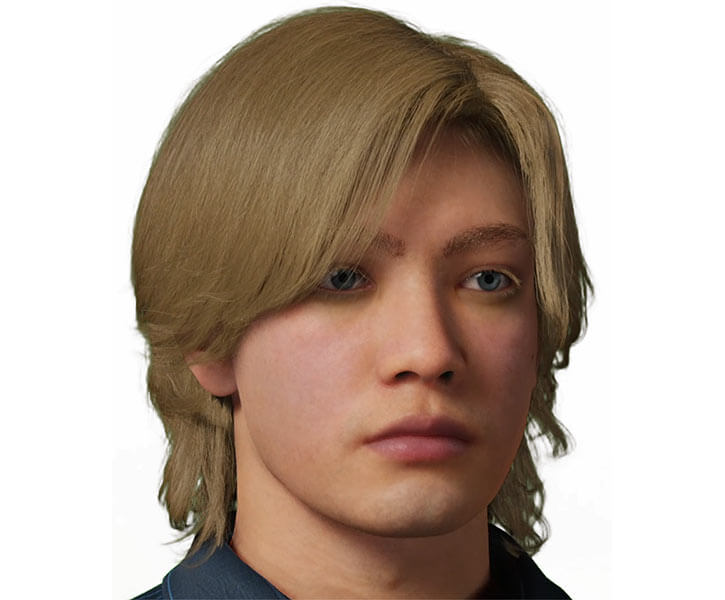 Harry Keogh was the only child of Gerald Snaith, an Edinburgh banker, and Mary Keogh, the daughter of an expatriate Russian lady.

Harry’s mother and grandmother were both psychic sensitives. It is almost certain that Harry inherited his psychic talents from them. But in Harry’s case, the talent blossomed to a super-human magnitude.

Gerald died of a stroke within a year after Harry was born, and Mary remarried two years later. Her second husband was Vicktor Shukshin, a Russian dissident.

He murdered Mary by drowning her under the ice in a frozen river. Mr. Shukshin convinced authorities that the death was an accident.

Inheriting the estate, Viktor soon shipped off young Harry to be raised by an aunt and uncle in Harden, on the Northeast coast of England.

Harry grew up as a daydreaming and introspective child. He had no requirements for real friends, because of the many dead friends who kept him occupied in conversation.

He was very similar to the young boy in the The Sixth Sense movie. In fact, the latter may have been modeled on Harry Keogh.

Though Harry was extremely intelligent, he wasn’t attentive. As a result, he was not generally considered a good student, until a teacher discovered his remarkable aptitude in mathematics.

While some of this aptitude was natural, the fact is that Harry had been tutored by a teacher from beyond the grave.

Similarly, Harry was able to develop other skills with special assistance. He once beat up the school bully with the help of a deceased martial arts instructor.

Eventually, Harry gained entry to a technical college. There, he attempted to fit in and rely less upon his special talents.

However, to fund his education, he began writing and selling short stories, which were actually the posthumous creations of a dead author. Subsequently, Harry authored a best-selling novel, which purported to be the diary of a 17th century rake.

The novel was praised for its historical accuracy. This was not surprising in view of the fact that Harry got it straight from a dead collaborator. Harry was not much of a writer himself, and relied almost exclusively on Deadspeak to author these works.

By the age of 20, Harry had unknowingly come under the scrutiny of E-Branch. This was an obscure and super-secret wing of British Intelligence.

Shortly thereafter, he confronted his stepfather. Harry nearly met the same fate as his mother, until she suddenly rose from her watery grave to save him.

Meanwhile, Soviet Espers moved in on Harry. Their goal was to destroy him or claim his power for their own. Forewarned by members of E-Branch, including their late director, Harry set about preparing himself for the coming battle.

As part of this preparation, he visited August Ferdinand Mobius  , a long-deceased mathematical genius. He learned from him the secrets of access to the Mobius Continuum. 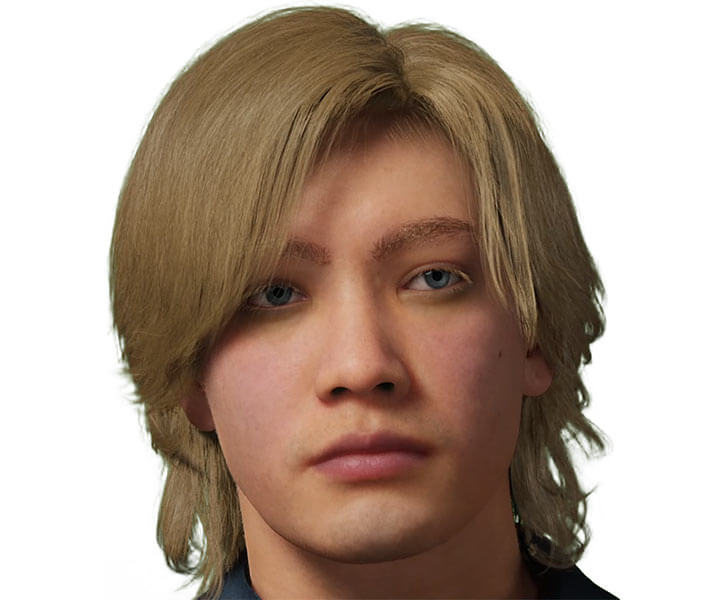 Harry is a young man with delicate features. He is slender to the point of appearing frail, but is more resilient than he looks.

(The portraits are arbitrary since I can’t find official art – which might only exist in the obscure comic book adaptation, I’m not sure — Ed.).

Harry has a reserved demeanor. He is respectful of the Dead.

For game purposes, play him like a funeral director. However, keep in mind that he has an enormous strength of spirit and is virtually fearless.

There are two additional things about his personality that bear mentioning. First, he has an astute appreciation for poetic justice. Hence, the Irrational Attraction in his DC Heroes RPG stats.

Second, when acting as a medium, as described above, Harry will tend to adopt the speech patterns and some of the personality traits of his source. An inherent advantage to this side-effect is that Harry may become temporarily fluent in the languages known by his source. 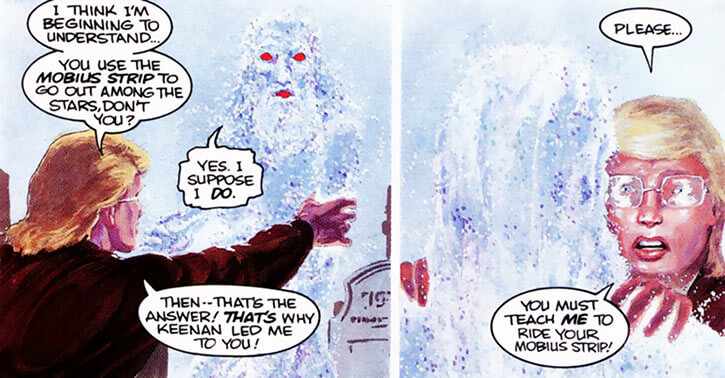 Found this after republishing this entry – excerpt from a Malibu adaptation collecteded in 1992.

“I am the justice of all the lives you’ve taken, held back far too long, pent up, and now about to burst out and enact itself on you !”

Harry would be a natural addition to the Trenchcoat Brigade and, in any event, would likely cross the path of John Constantine.

In the alternative, he could be used as a lesser-powered substitute for the Spectre in campaigns calling for a macabre element.

He could also be used as a go-between involving deceased characters. He is not much of a team player, unless you happen to be dead, in which case he is quite a coach !

(I guess you could also “merge” Harry with Phil, the son of Esther Babakina, if you’re weird — Ed.).

By The Ancient One.