Ned Slade is a veteran law-enforcement officer. He might the best man on the force, and thus is superbly skilled in weaponry, detective work, driving etc..

Being an extra-dimensional traveler, he has seen and experienced incredible things.

Although effective, he requires total rest after a stressful mission. This is done by being temporarily overwritten by a “para-personality”. This alternate person lives in a suburb on Earth.

Near the end of the story, he acquired superhuman abilities by hosting I-Life. He thus could heal physical and mental damage and had, to some degree, serial immortality. The I-Life also protected his mind against manipulation and brainwashing. 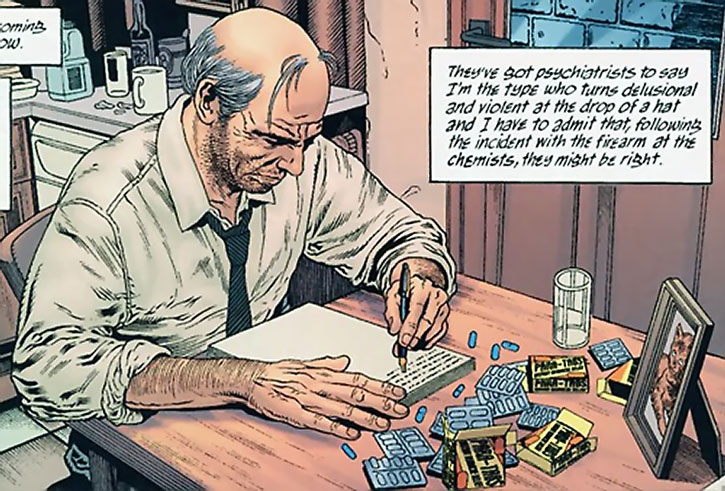 “The Hand strikes
The Hand caresses
The Hand invokes
The Hand signals
The Hand gives and takes
We are the Hand that wipes the arse of the World
We enforce Status: Q
Prepare for inoculation
Stay close to the sick bag
This is the Filth.”

The Hand organization is an extra-dimensional law-enforcement force. It has been around since 1952. It makes sure society continues along its prescribed path, the Status: Q. The Filth will eliminate aberrations, whether they’re technological, spiritual, or even sexual.

The Hand has jurisdiction over all other Earthly agencies. It has been referred to as a super-cleansing organization. The headquarters is located in a place called the Crack. The organization has access to bizarre, yet advanced, equipment and vehicles. The organization will always have all the available officers it needs for its function.

All humans on Earth are conditioned from birth to disregard the activities of the Hand.

Officer Ned Slade is part of the Hand department. There are also four other departments: the Fist, the Frequency, the Finger and the Horns. All of the departments are collectively called the Filth, and its members are sometimes referred to as cleaners.

Other prominent officers, that Slade often worked, with were officers:

The paraperson of Greg Feely

The “Greg Feely” identity was how Slade used to relax. The house in the suburb was his place and where he could unwind and be kind. The house was where he could come to get away from the horror of his work. Where he simply could forget his work, because that was exactly what he did, forget everything about his real self.

“Greg Feely” is an artificial para-personality that overwrites him. It makes him completely forget his real self as long as it’s active. The para-personality itself originates from a colorful, slimy liquid. The liquid is swallowed to take effect, and is usually removed using a special device. 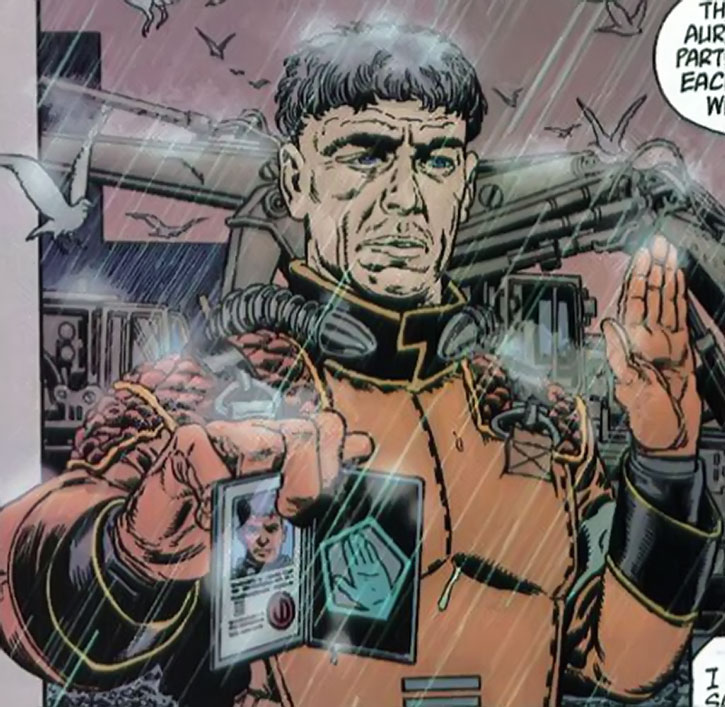 As the story begins, a para-personality crash has occurred. This made Feely the dominant personality, with snippets of Ned’s memories, skills and personality overlaying it. The result was a permanent dual identity. Officer Slade thus feels more at home in his Feely personality, thinking Slade an artificial creation.

In game terms, whenever his Psychological Instability activates, Slade will suffer from memory loss. He’ll thus be unable to complete his assignments properly. He will also forget the basic principles of his work and ask lots of questions repeatedly, much to the dismay of his colleagues.

While in this state, he will attempt to return to his life as Greg Feely as soon as any assignment is completed, successfully or not.

For Ned Slade’s unique and odd uniform in prime colors, see the illos. The Hand officers, who are normally shaved bald, wear a wig as part of their uniform; in Slade’s case this is a blue toupee that protects him against electro-magnetic attacks.

As Greg Feely he is an unattractive middle-aged man with combed-over hair and wears a brown suit, a white shirt, a black tie and a pair of sneakers. Both Ned and Greg are often seen with a half-disgusted facial expression.

Ned Slade is a top-notch agent. He is effective and daring, yet the horror of his work takes a toll on him. Complete rest buried under a para-personality is necessary to endure this.

He seems to have been fond of fellow officer Miami Nil. At least since the para-personality crash he deems it important not to use excessive violence to complete his missions. His experience, skills and strong will make him superbly effective. 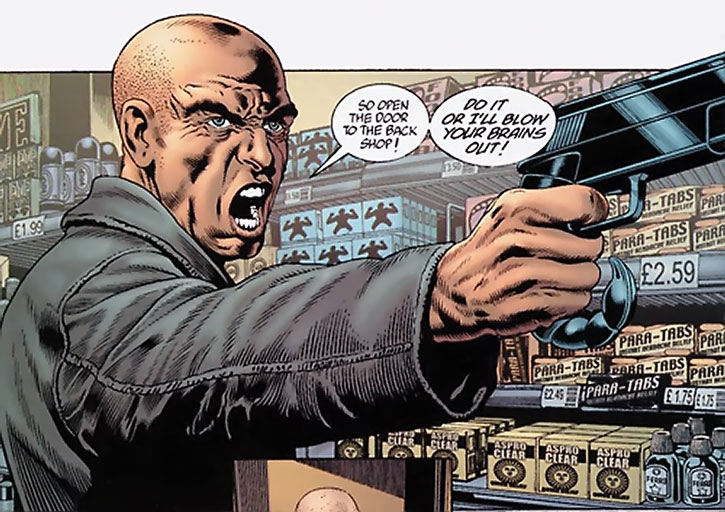 Feely just wants to be left alone and to live a peaceful life. It/he is an exceptionally well-constructed off-duty safe persona.

There was a third, original personality – before he became Ned and then Greg. This man had, together with other anti-persons, sought to destroy the foundation stone of the world.

The truth about all Filth agents is this: they were all originally someone else until they were recruited into the organization and acquired a completely new personality, set of memories and over-the-top name. They are all infinitely replaceable and there will also be all the agents that are needed.

The integrated, dual personalities do not mix well. The result is a character with conflicting motives, conflicting desires and no complete sense of self.

After being branded an anti-person, the highly skilled Slade was very dangerous. His motivation changed into making everyone see the truth and the horror. Once that was accomplished, seeing all the pain that he caused, he regretted his actions.

Eventually, he returned to a peaceful life as plain old Greg Feely. But now he retained the memories, skills, and, not the least, confidence of Slade. In his life as the new Greg Feely he rights small wrongs in the world using his new-found abilities. The organization keeps trying to recruit him back into agent work, but an amused Greg declines, preferring Hand work as a free-lance agent.

“My lovely cat’s gone. The police dug up my back garden. I’ve lost my job. The neighbors think I’m a pedophile… I’ve got nothing to lose now, do I ?”

(Visiting the Crack during amnesia) “Are we on another planet ? Just tell me; I can take it. Am I in the future ? Or in Virtual Reality ? Am I in a state ward wanking in front of relatives ?”

“Enough. I’d like to be excused from duty on the grounds of psychiatric ill-health ! Please.”

“I didn’t mean it that way. I was trying to be assertive. I was just trying to act big. I’m so sorry.”

“The word ’disturbing‘ has acquired a new definition today.”

Bonuses and Limitations:
Those Powers only appear at the very end, after the new Hand order had been reinstated and Slade / Feely becomes the host of the I-Life.

Connections:
The Hand department of the Filth (High).

The paraperson of Greg Feely

He later returned to normal status (his basic stats as given above), although he now had powers, a new Motivation and the SIA Drawback. Although he, by then, formally had left the organization, he probably retained all Connections.

Source of Character: The Filth by Grant Morrison (DC Vertigo). 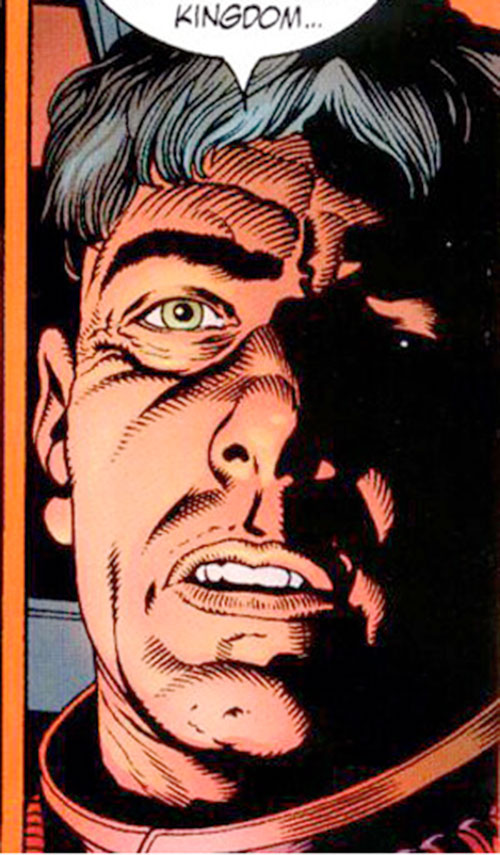 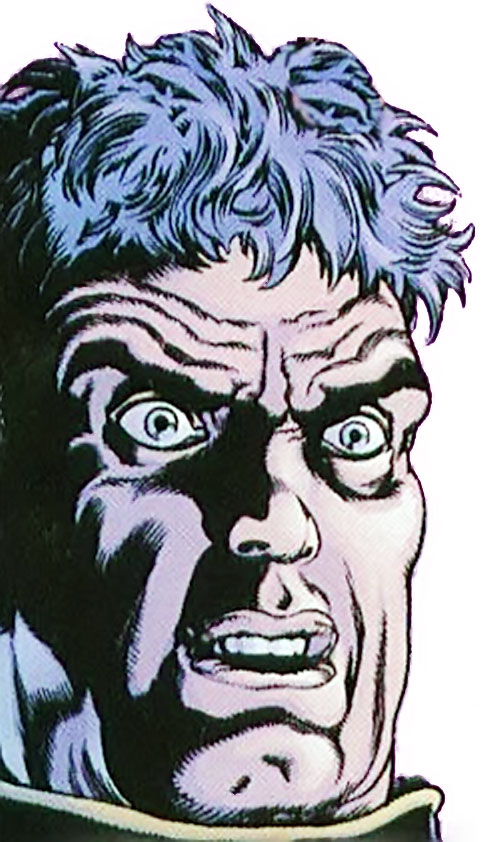 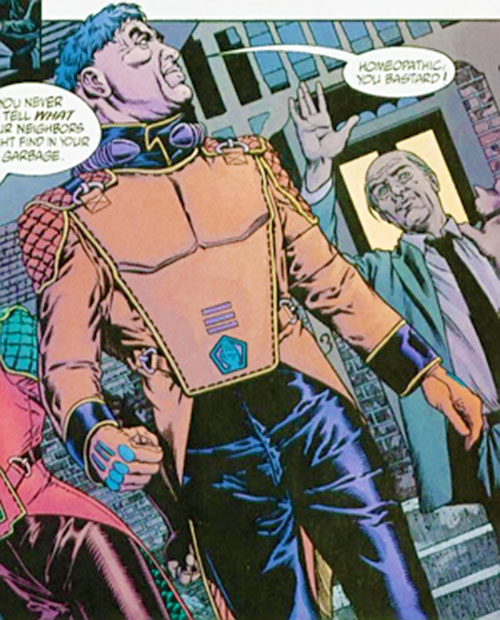 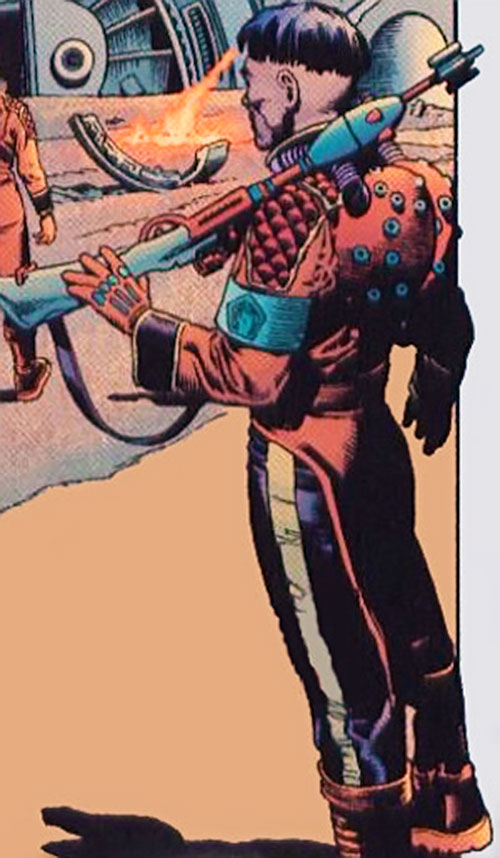