Negate has the amazing power to neutralize superhuman abilities. This works on anyone, except those whose abilities originate from their own innate physiology, such as gods and aliens. Mutants are still affected.

The effect is instantaneous, when he touches the target. The loss appears to be permanent.

It is unknown whether the power is intrinsic, or originates from his gauntlets.

Negate is a small man that very often manages to sneak up on his opponents. Although he’s a poor physical fighter, superhuman opponents will, of course, tend to stay away from him.

Negate first appeared as a member of the Vicious Circle. He was tasked with removing the super powers of threats to this mob. It seems that Negate was also a member of the disparate group known as the Frightening Force at one time.

Negate has permanently removed the powers of, at least:

In 2000, Negate was kidnapped by DarkLord. His and Baby Boom’s, powers were used to detonate a world-wide nega-bomb. It removed the super powers of everybody on Earth at that time (Savage Dragon #75).

He has since resurfaced on the Savage Earth continuity. There, he managed to remove the powers even from the Savage Dragon for awhile.

Given that the effects of his power removal are permanent, he remains the same threat to super heroes of the Savage Earth as he was on the original Earth of the Savage Dragon.

Negate is a small man in a jumpsuit. He wears a pair of technological glasses and high-tech gauntlets. It is assumed that these gadgets assist him in his primary task, the removal of superpowers, and the power may even reside in the gadgets.

Oddly enough Negate always wears the glasses and gauntlets, even while in prison; perhaps they are cybernetics and cannot be removed.

Whenever Negate is using his powers the glows sparkle with black and white energy.

The head of Negate is very noticeable as it is large, bald and full of boils.

Not a fighter, Negate moves slowly, but sneakily enough.

Negate is a loyal follower and henchman, and obeys the current leader of the Vicious Circle. He appears to be a villain because he feels he has no choice. He is rather morose, silent and brooding. 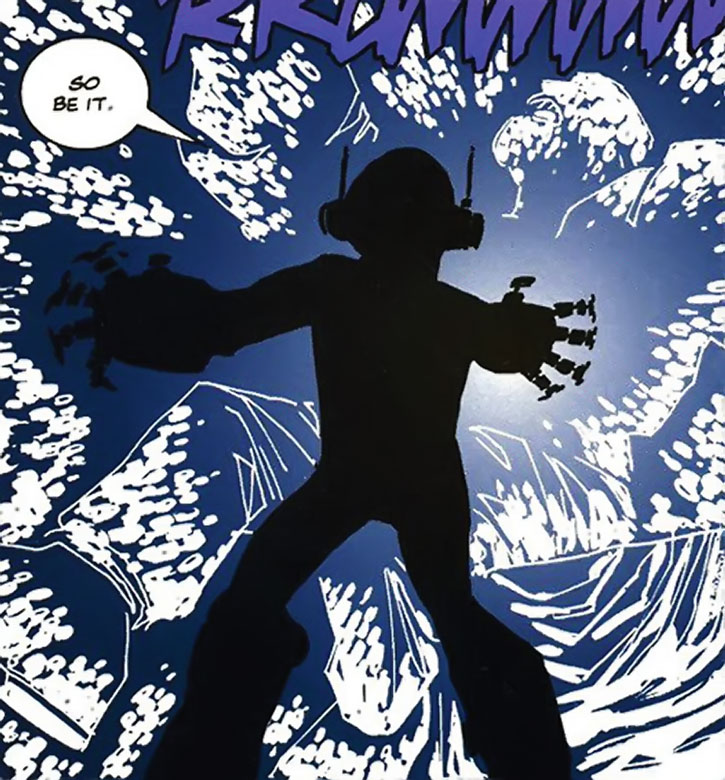 He seems to be a reluctant villain; he seems to be almost sorry to have to do what he is ordered to do. Still, he does his job and his abilities make him a major menace.

Despite his small size it is unlikely that he is being taunted by the other gang members. More likely, he’s feared by the others, and probably doesn’t have too many friends and allies. It is reasonable to assume that he knows the scientific villains the best, and he was quite possibly once a scientist himself.

Although one might perhaps assume that a small man such as Negate would enjoy removing the powers from godlike super humans, it does not appear to be the case. He gives the mighty due respect, and will not gloat about his abilities.

Seemingly, his power is not wasted and he only attacks the most powerful of targets in the world. There seems to be some matters of honor involved and he is generally polite.

He seems hesitant to remove the powers of freaks such as himself, but shouts war cries when he attacks heroes.

“Excuse me, sir, I’d like to introduce myself. I’m called Negate. For reasons that will soon become obvious.” [touches Slab and permanently removes his powers]

“Feel the touch of Negate !”

“I respect your wishes, Bludgeon. Power can be both a blessing and a curse — I with things could have turned out differently for you. For myself as well. Your decision has been made — the die has been cast — so be it.” [rruuummmm]

CyberFace: “Neutralize him, Negate.”
Negate: “I live to serve, master.”

Negate is an early ancestor of the 30th century villain named Neutrax. The power has evolved from being limited to a range of touch to being ranged.

Whenever the intent is to remove powers Negate will spend the maximum number of HPs on is AV.