The Negative Zone is an entire universe within the Marvel Multiverse. It first appeared in a 1966 Fantastic Four story.

It is sometimes called “sub-space”.

This here entry isn’t a definitive article. It’s a blotter where I jot down notes taken during other bits of research.

It likely will never be definitive. That is, the product of thorough research of every single Negative Zone appearance.

The Zone is a separate universe from our own. Passage between the two is difficult, but Reed Richards invented a gateway back in 1966.

The laws of physics in the Negative Zone are different than in ours. But it’s still a recognisable universe with space, planets, stars, gravity and other fundamental forces, etc..

It’s not one of ’em psychedelic, Ditko-esque magical realities.

Everything in the Zone is made of antimatter. But this isn’t like antimatter in real astrophysics. Rather, it’s a 1960s, loose, pop physics understanding of such.

Still, normal matter and Negative Zone “antimatter” annihilate each other on contact, with a titanic explosion.

Means of travelling between the matter universe and the Negative Zone normally “flip the polarity” of travellers. This allows them to exist in the destination universe without hindrance.

Otherwise, the journey would be a short one. 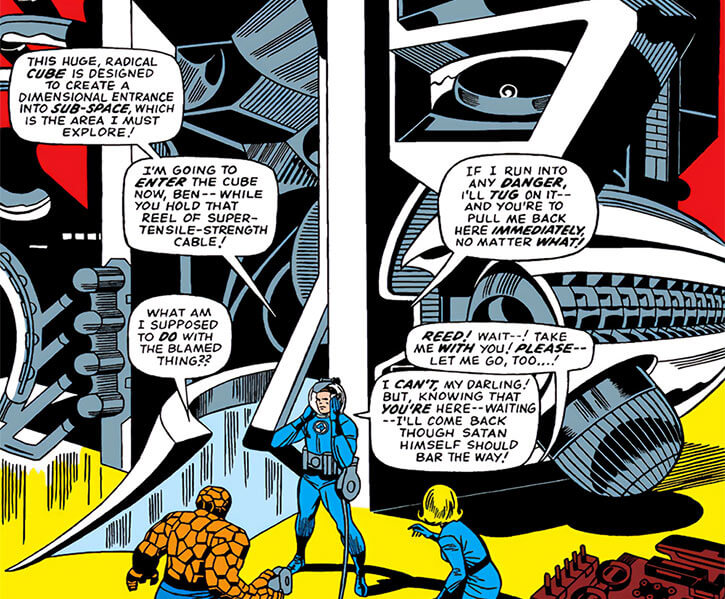 The earliest model of Negative Zone portal by Reed Richards.

Highway to the Negative Zone

The Negative Zone seems smaller, older, and more barren than our universe. There apparently are fewer life forms than in the Marvel Universe.

Yet the entire Negative Zone has a breathable, Earthlike atmosphere. You can even make a fire whilst floating far away from any sort of planet. Humans do not seem to develop health issues after hours of breathing Zone air.

Furthermore, almost every celestial body has a 1G gravity field. Even if it’s just a one-ton rocky debris. The mass of an object only seems to determine how far its gravity well extends, rather than its intensity.

On the other hand, the power of magic is halved there. Or at least the magic used by Agatha Harkness is.

(In the Marvel Universe there is a connection between magic and the stars. Since the stars in the Negative Zone seem much older, “mana levels” may have tapered off.)

One of the few sapientCapable of intelligent reasoning species that emerged in the Negative Zone were the Tyannan lion people. They achieved space flight and a mastery of biology.

However, they also realised that their homeworld was doomed to fall into the Vortex, a nearby singularity.

One of their legacy projects was to seed the Negative Zone with life. This implies that there were even fewer life forms in the Zone back then.

(It is likely that the Tyannans also started planetary chemical chain reactions to facilitate life.)

One major success of this panspermia campaign was the world of Baluur. The Baluurians even resemble the Tyannans, to an extent.

One Tyannan seeding ship was lost in a crash. Yet it was ultimately successful in bringing life to Arthros. One creature of this planet, Annihilus, would eventually learn Tyannan technology.

(The “forerunners species” is a common sci-fi theme, with the term having been coined by Andre Alice Norton  . The SFE has examples  , for the curious. I suppose that Halo may be the most famous one.)

The D.A. is accessed through Reed Richards’ portal. It is an intermediary zone, a sort of airlock to travel between the positive and the negative.

On Earth, it’s always behind the portal. But it seems to drift on the Zone side. During the 1970s, it seems to remain in the vicinity of Annihilus’ homeworld.

Early on, crossing the D.A. was done in stages. This allowed for the matter polarity conversion, and gave time for the brain to adjust to alien perceptions.

The vicinity of the D.A. also seems special. For clarity, let’s call this the Outer Distortion Area. 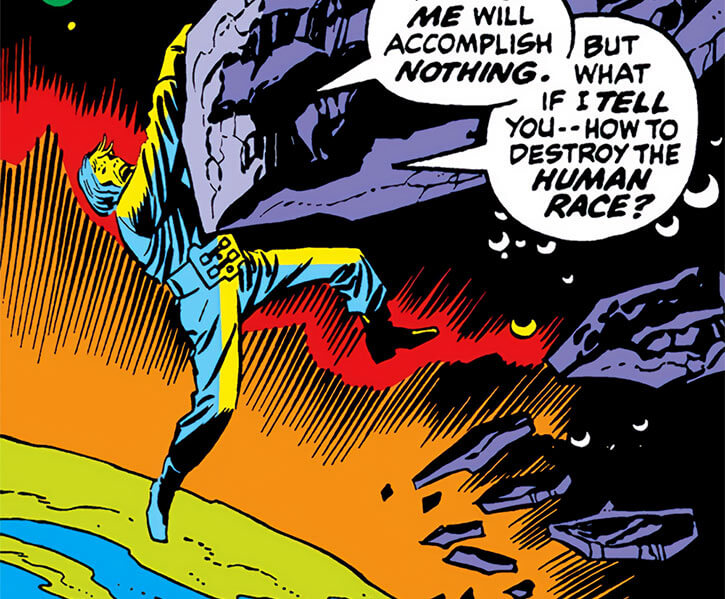 Annihilus and Janus the Nega-Man.

Making sense of the ODA (possibly)

Early depictions of the Outer Distortion Area (ODA) are nonsensical and inconsistent. Here’s a No-Prize HypothesisA made-up explanation to plug a plot hole to plaster over that :

One small, specific area at the border of the Outer Distortion Area could be tapped to produce “nega-power”. This is what empowered Janus the Nega-Man.

Physically reaching it is dangerous. The slightest mistake may send a person adrift into the ODA. 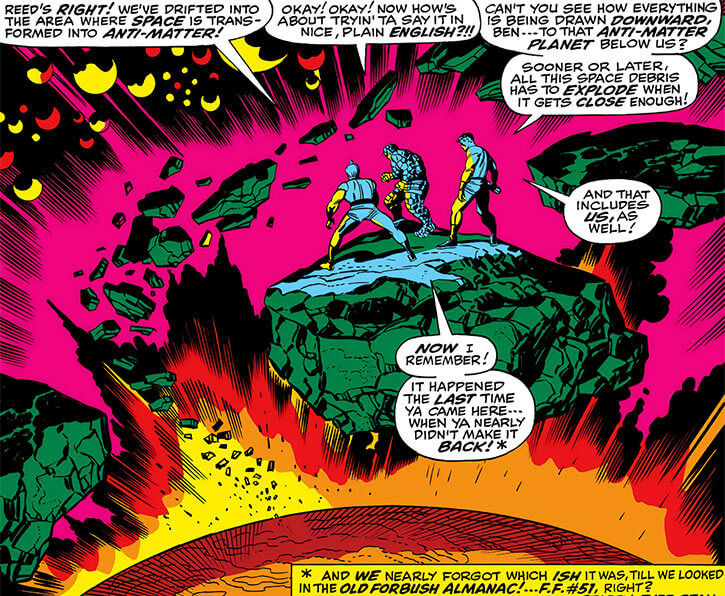 The ODA back when it seemed plugged by a Zone planet.

Zone lifeforms who do not specifically serve Annihilus include :

These are powerful but very simple-minded animals. All they do is roam around in a school, and eat. A borer can rapidly chew through almost any form or rock or metal. A school can wreck and eat a spaceship within seconds.

One Borer has about DEX 03 STR 09 BODY 08, Claws: 12, Digging (Tunnelling Only): 16. When attacking a vehicle, they can treat it as an obstacle and use Digging to bore through the hull. Technically it’s a Power Loss on Claws, but heh. 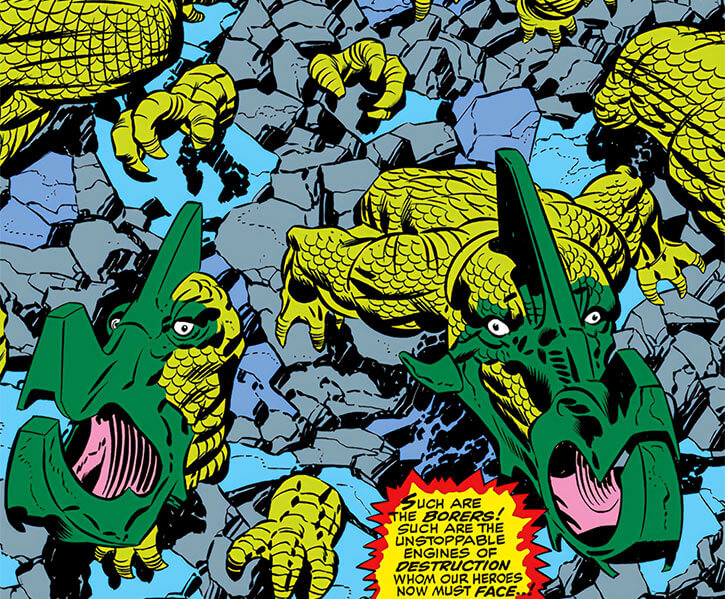 A school of borers.

These unnamed creatures are a good example of generic Zone people. They briefly attacked the FF in 1973.

They seem very low-tech, perhaps subsisting as hunter-gatherers in a rocky desert. They had some ties with Annihilus. Perhaps some of their numbers served as workers for Annihilus, in return for their lives.

They also had some low-level telepathic abilities. This allowed Dr. Richards to interrogate one once they were defeated.

Each seemed to have about DEX 03 STR 05 BODY 04, Telepathy (no combat): 02. Those serving Annihilus will presumably be issued an Energy blast: 06 blaster, using their DEX as AV. 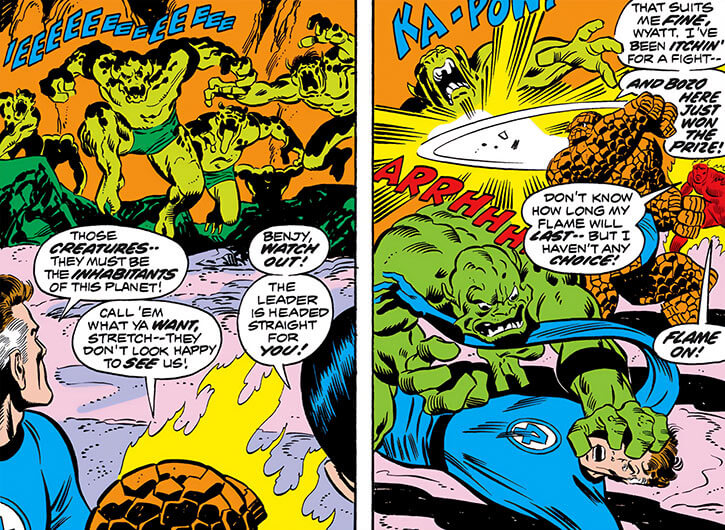 The slip mob, though I guess they could also be the knickers crowd – but not the thong throng.

These maya blue humanoids are an example of life form roaming in Negative Zone space. Their natural milieu seems to be asteroid belts, and they seem to prey on smaller, bat-like animals.

Though they are somewhat humanlike, they seem to have — at best — the smarts of a dog who has watched every Cheaters show. Reed Richards easily chased them away.

DEX 03 STR 02 BODY 02, Flight: 05 feels a bit generous, but they have no Hero Points and poor intelligence and tactics.

They presumably also have APs of Analytical smell/tracking scent, or some other means to find prey. 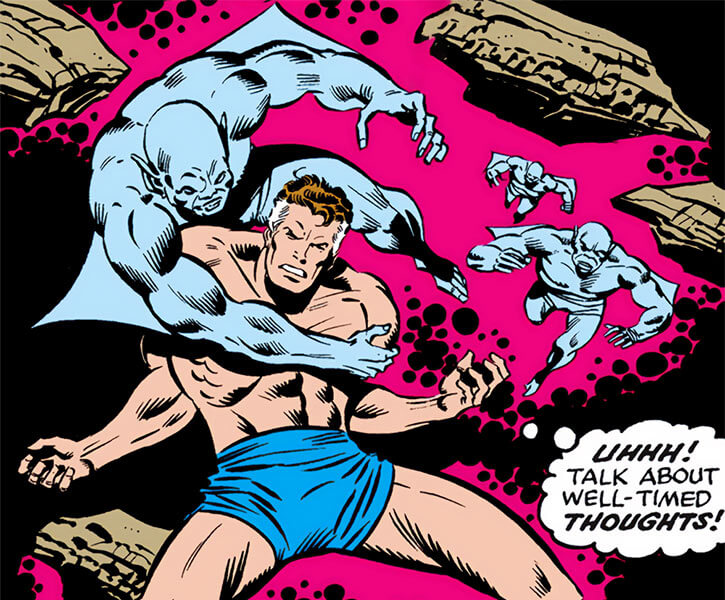 (This section proposes ways of using this dimension in DC Universe stories).

The DCU has its own antimatter universe, where Qward lies.

The two can be amalgamatedTo merge together characters and concepts from the Marvel Universe and the DC Universe. But it tends to dilute the unique characteristics of each – particularly Qward’s. 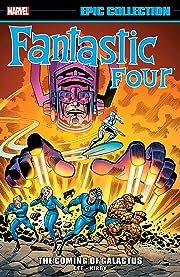