Both Soseh and her sister have been genetically altered, then surgically and chemically enhanced. They have been intensively trained, using normal methods and memory tapes.

The Mykros sisters have superhuman strength, speed and regenerative durability. They also both possess eidetic kinæsthesia  allowing them to instantly and precisely replicate movements they see others perform. They know how to handle a vast array of weapons, are trained to expert levels in a wide variety of martial arts and are superlative athletes and acrobats.

Soseh has learned part of her swordswomanship from her sister (who apparently was originally the better of the two at swordplay), and when associating with the JSA copied numerous moves from Black Canary (including techniques from rare, secret styles) and Wildcat.

Presumably, eidetic kinæsthesia could be used to learn physical techniques much faster, or to counter specific techniques used against her. But this was not demonstrated in what little material exists about Nemesis.

The most reliable ways to kill them are decapitation or destroying their heart. The sisters regenerative abilities are strong enough to bring them back from well beyond death’s door. Soseh once survived for days after having clinically drowned, reviving within 15-20 minutes of washing ashore. A solid hit with a burst of 9mm bullets in the chest will entirely heal in a matter of hours.

Nemesis’s main weapons are a pair of sabres resembling the traditional tulwar of the Middle East. Hers are forged in very high grade steel. With her superhuman strength, these blades are able to cleave through an human body from head to crotch, or even through solid stone.

Soseh and Ellina Mykros are the twin daughters of a beautiful Armenian woman named Nairi. Nairi died well before her daughters were born, during the 1918 genocide .

However, her husband was one of the gifted scientists working for the conspiracy called the Council. He conserved her ova until he could find a way to artificially fertilise them. He would be able to bring the resulting children to term within an artificial womb.

Once this technology was perfected, Dr. Mykros further waited to have his daughters. He and his colleagues within the Council had been developing a number of other technologies that could turn children into superhumans.

The Council was a corrupt organisation. Originally dedicated to protecting the world, it had degenerated into an agenda of conquest. The Council was very oriented toward scientific research, and its most spectacular breakthroughs were in cloning and genetic manipulation. They were perhaps most famous for their resurrection and cloning of Paul Kirk, the costumed adventurer known as the Manhunter.

The Kirk clones served as a redoubtable corps of enforcers. Both the original and the clones were extensively trained in ninjutsu by the legendary master Nitobe Asano. During the early 1970s, Kirk and Nitobe turned against the Council, and this war ended in the apparent destruction of both Manhunter and the Council.

However, Dr. Anatol Mykros survived the Manhunter’s suicide run. The Council slowly rebuilt itself around him. Meanwhile, Mykros toiled to finalise the treatments that would turn his future daughters into assassins greater than even Manhunter.

It is unclear when Soseh and Ellina Mykros were born. But since their physical maturation was accelerated to make them operation quicker, it presumably took place during the early 1990s. This in turn means that the destruction of the Council would have set back the research by almost two decades.

The years of pre- and post-natal treatments for his daughters were little better than torture. Yet Mykros was willing to have his children pay the price for his sick dreams of a perfect assassin.

By the time of the birth of the Mykros sisters, the Council had largely rebuilt its financial, paramilitary and scientific power base. Their father, apparently the head of the organisation, also spearheaded research that resulted in a new generation of clone enforcers.

These clones, liked their predecessors, were based on a man with stupendous physical abilities. This time the genetic material was that of Sportsmaster (“Crusher” Crock). 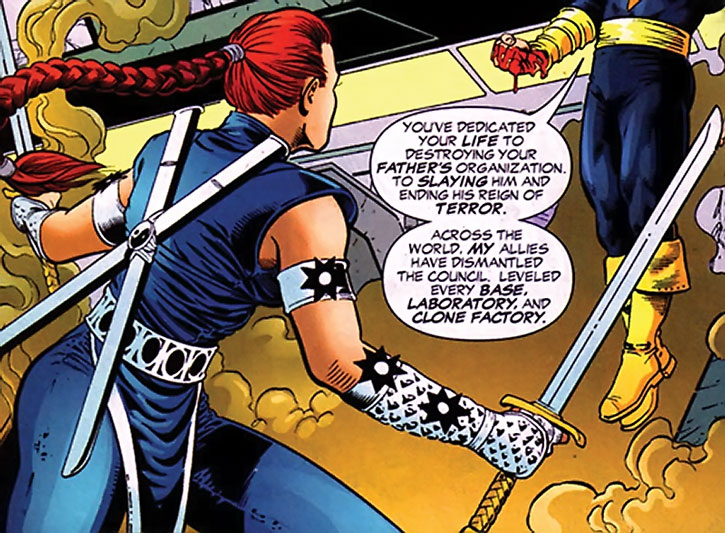 Dr. Mykros and the Council indoctrinated the sisters into believing that the Council was a benign organisation. However, as she grew up, Soseh came to realise that it was a lie. The Council had arguably became even worse than it was in 1973, and was getting even more insane and murderous.

Soseh rebelled and wanted to fight them. But Ellina refused to betray their father and remained loyal to the organisation.

Distraught, Soseh nevertheless deserted and started her one-woman war against the Council. She took the name Nemesis, and her beloved twin sister became her mortal enemy. That another Nemesis (Tom Tresser) bitterly fought another Council in the 1970s would seem to be a coincidence, as Soseh’s choice of super-hero name was a mythological reference .

War against the Council, part 1

In 2000, Council forces including Ellina caught Nemesis near the Parthenon  in Athens. Soseh killed them all – and even wounded her sister badly enough to take her out for a while. Yet Soseh was herself grievously injured in an explosion and thrown unconscious into the sea.

Days later, she washed ashore on Themiscyra, the realm of the Amazons. By that point Hippolyta was training the ladies of the JSA – Hawkgirl (Kendra Saunders), Black Canary (Dinah Lance) and the Star-Spangled Kid (Courtney Whitmore) – in guerilla warfare. After some confusion as she emerged from her death-like torpor, Nemesis explained who she was and what she was doing.

The JSAers, having had some run-ins recently with the Council and their agents, decided to ally with her to finish the job Manhunter had started decades before.

War against the Council, part 2

The Council had grown overconfident. Thus, Nemesis gambled that an all-out attack on their main lab, hidden in an abandoned nuclear silo in Crete, could cripple them. She and her four JSA allies attacked swiftly. Though they ran into a small army of incubating clones, they killed them all and discovered a live nuclear missile in the silo.

Black Canary disarmed it thanks to instructions from Oracle, while Nemesis located her sister Ellina and went after her. However hidden fail-safes started a non-nuclear self-destruct sequence, and the JSAers had the evacuate. Meanwhile Soseh found and finally killed Ellina, letting the body fall into the sea as she reeled from the emotional shock.

Though the Council had been crippled, it was still around – as was Dr. Mykros. Nemesis continued her war against the organisation, occasionally calling upon the JSA for reinforcements.

During one such operation she, Wildcat (Ted Grant) and Black Canary discovered that the Ultra-Humanite was involved with the organisation. They found a distinctive brainless, decomposing gorilla corpse in an abandoned Council base.

In return, Nemesis served as a JSA reservist, and was called in during major crises. When Obsidian, Mordru and Eclipso allied, Nemesis thus teamed up with other JSAers and reservists to fight Obsidian’s shadow-soldiers in Los Angeles. She also served on Wonder Woman’s all-female army that retook New York City from Circe’s spell turning men into animals.

After Black Adam turned rogue, he assembled a group of superhumans who shared his values. That included Soseh Mykros. To recruit her, he and his allies destroyed every Council base they found in a matter of days. Black Adam then :

When the JSA came to Kahndaq to stop Adam and his agents, a brutal fight ensued. During this bloody battle, Nemesis cleft Stargirl (Courtney Whitmore)’s cosmic rod in two.

Soseh then grievously wounded Hourman (Rick Tyler) after he hit Montez, forcing Hourman back to Timepoint in a critical state. Tyler was only saved through time manipulation to allow for a desperate surgery by Doctor Mid-Nite (Dr. Pieter Cross).

His father the original Hourman (Rex Tyler) came to avenge his son, and he and Hawkgirl engaged Nemesis in combat. During the fight, her lover Eclipso killed Nemesis, apparently as a result of a brief possession by the cruel spirit of the actual demon Eclipso.

Shocked by what had just happened and sensing that Eclipso was going to possess him permanently, Alex Montez threw himself from a building to his apparent death.

Howbeit, one notices Montez’s energy beam punched through Nemesis’s diaphragm, not her heart. There’s thus reason to suspect that Nemesis did not actually die in Kahndaq, and that her regenerative powers allowed her to recover.

Still, large statues in the likeness of Soseh Mykros and Alex Montez were built in their memory in Kahndaq. These statues were later animated by Eclipso (Jean Loring) to attack Stargirl and Atom-Smasher, and destroyed.

Soseh used to wear a necklace of blue beads (a colour traditionally believed to protect against evil magic in much of the Middle East) inherited from her mother. Those were revealed to be a secret tracking emitter and she threw it away after her last fight with Ellina.

As her nom de guerre indicates, Nemesis was entirely dedicated to the destruction of the Council. This difficult goal consumed her. She never stopped and never wavered from this 24-7 war.

In fact, Ms. Mykros seems genetically enhanced to be unable to give up. This seems similar to how many of the Council’s clone soldiers have been tweaked to fight until every trace of life has left them. She also seems to have been genetically programmed to have a slaying addiction. Soseh physically needs to fight and kill something.

Given this overriding dedication, her actual personality is unclear and seldom seen. She seemed to be a nice young woman, a bit shy and quite lonely due to her lack of socialisation. Being a friend of the female members of the JSA was apparently a significant experience for her. One suspects that it was one of the her very few social ties.

Despite all the hardcoded and softcoded programming to kill all enemies, Soseh was very reluctant to kill her sister. Forcing herself to do so took a heavy toll on her.

Since her father was insanely evil, she tends to identify more with her mother. That is despite having been born years after her death and knowing essentially nothing about her. All Soseh has is a photo of her, presumably taken circa 1915. Soseh identified as Armenian, was fluent in the language and tended to associate Greek (even Ancient Greek) stuff with her father.

“You are wrong, Ellina. Father betrayed us. He’s insane. The whole Council is. And I intend to stop them.”

“Gestation bags in order to grow their soldiers to adult size more efficiently. They’ve developed an over-sized embryo, amped with natural and artificial flavours. My father is a genius. Albeit a twisted one. He used the same process to create a new body for himself.”

“God be with you, Ellina. Because he’s sure as Hell not with me.”

“But the war isn’t over yet. Not until the last of our enemies have fallen.”

“I was programmed to hate.” 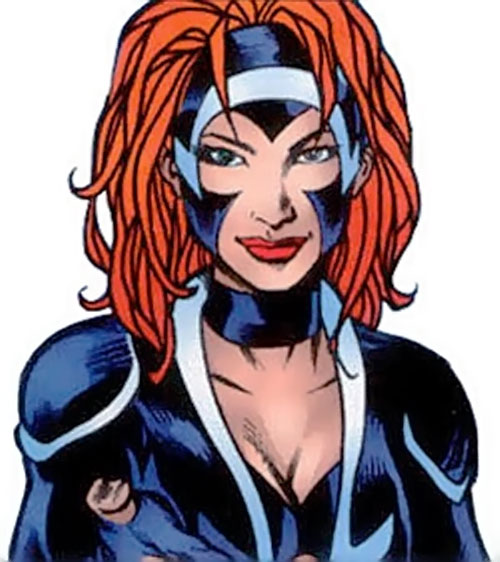 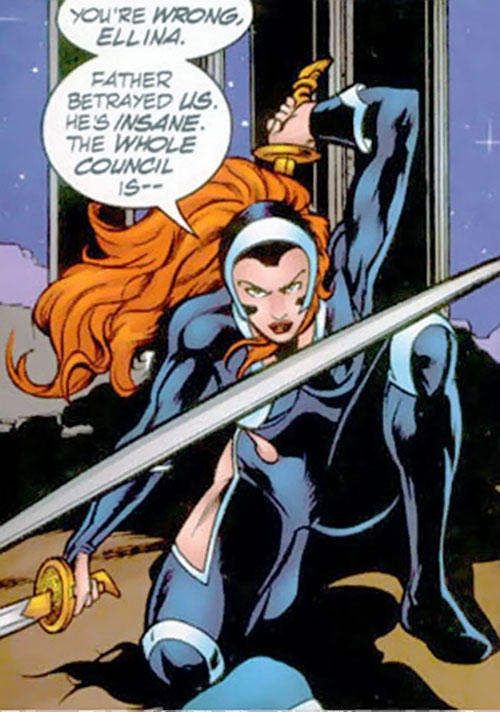