Nemesis Kid can instantly adapt a specific power that can enable him to defeat any given opponent. For example, he can turn into living kryptonite to fight a Kryptonian. When faced with more than one opponent simultaneously, his power either allows him to flee or fails him.

As a resident of Myar Nemesis Kid also is an expert alchemist. Lastly, he has some training as leader being with the Legion of Super-Villains.

On the world of Myar, which was noted for its alchemists, a young man developed a secret formula. It gave him the unique ability to adapt whatever power or powers he needed to defeat any one opponent. At least, that was the story Nemesis Kid provided when he applied for and won membership in the Legion of Super-Heroes in the latter half of the 30th century. 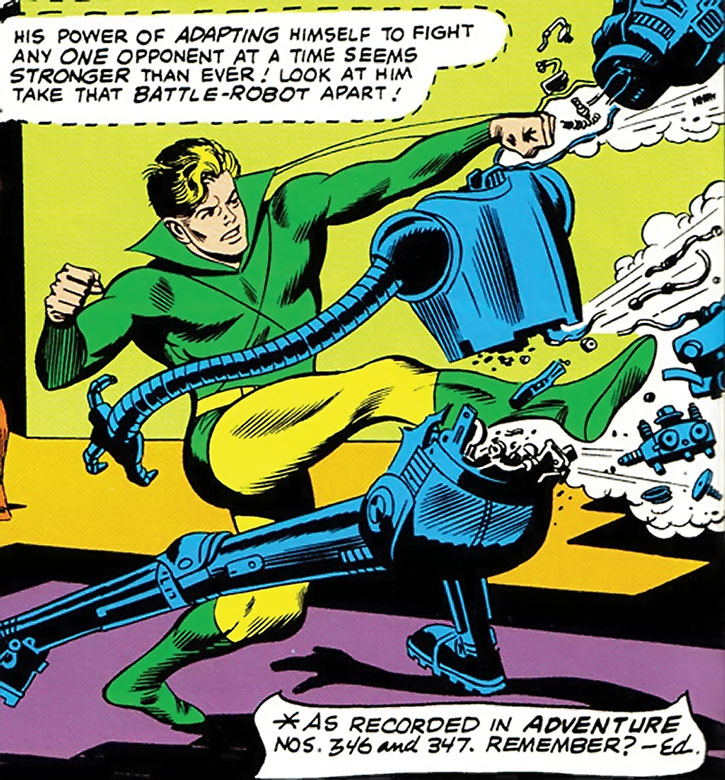 Immediately after Nemesis Kid joined – along with other new members Ferro Lad, Queen Projectra and Karate Kid – the Khund empire attacked Earth. In the course of defending Earth, suspicion arose that one of the new members was a traitor. After his attempt to frame Karate Kid was discovered, it was revealed that Nemesis Kid was the traitor.

The Legionnaires defeated the Khunds, but Nemesis Kid escaped.

Nemesis Kid reappeared as one of the earliest members of the Legion of Super-Villains. He ultimately became the group’s leader.

In the LSV’s most ambitious scheme, they transported the planet Orando out of its natural dimension in search of an entire dimension to conquer. While attempting to thwart that scheme, Karate Kid fought a single combat with Nemesis Kid and was mortally wounded. His wife, Queen Projectra, avenged him by managing to personally execute Nemesis Kid despite his superior powers.

His ultimate fate was to have his corpse piled up with ashes and gutter garbage, unburied, to be food for the carrion crows.

Nemesis Kid is a young alchemist with blond hair and blue eyes. Although he’s had no actual combat training he appears to be quite well trained. He usually wears a full body skintight supervillain costume in green and yellow. Only the head and hands are unprotected. His trousers are all in yellow and the usual pants outside the trousers are green as are the boots.

The upper body suit is mainly colored green except for the waist part and his sleeves which are in yellow. The chest part has the colors drawing an X in which the top (up against the throat) and the bottom (against the abdomen) are in yellow. The shirt also has pointy clothing stuff each side of the head in green like many magicians or higher noblemen carry.

All in all it looks like a basic villain suit with a slight touch of mysticism. He certainly doesn’t look as deadly as he is. Nemesis Kid believes his powers make him immune against anyone and it shows in his slightly cocky style of movement.

Nemesis Kid is all about gaining power. In addition to this drive, one notes:

Once he even led his team against new dimensions in search of an entirely new dimension to conquer. He also believes himself to be unbeatable and that he can defeat any opponent at any time which basically is true.

In combat he can be very fierce and often uses the opponent’s own power against him in an attempt to kill him.

When he wants to he can be quite a likeable guy, but this is a rare occurrence. Most often he is a really arrogant, smarmy bastard, though, and that is how he should mainly be played.

“I’m Nemesis Kid, from Myar, the Alchemists’ Planet ! I use my alchemical skill to give myself the power to defeat ANY opponent. To prove it, I’ll challenge an atomic robot ! Fewer than a dozen super-heroes have ever beaten one ! As he approaches, his powers cause mine to react, giving me just the abilities I need to lick him !”

“I admit it ! I wrecked the towers ! I destroyed the Legion weapons ! I’m the spy !”

(During the first Khund invasion) “Any moment, they’ll open fire… leveling cities, forcing Earth to its knees ! The Legion will die, as will all other defenders of Earth ! I will be richly rewarded, and YOU will perish !”

(After his first capture) Superboy : “What are we going to do with him ?”
Nemesis Kid : “You’re not doing anything with me, my friends !”
Lightning Lad : “He’s breaking loose !”
Nemesis Kid : “I can develop the super-powers needed to defeat anybody ! I’ve never tried it on more than one foe, but I’m ready to make a stab at it now !”

“Ahh ! I can feel my body adapting…taking on the power I need to beat you ! My strength has become double yours…you’ve had it, Superboy !”

Ron-Karr : “I never thought we’d do it, Nemesis Kid.”
Nemesis Kid : “Your lack of confidence is disappointing, my friend. True, our Legion of Super-Villains has had failures—but now we are our enemies’ equal… and more, Ron-Karr.”

“Ever since I found my abilities I have allied myself with those in power to gain power—the Khunds, the Super-Villains—now at last I shall be a power unto myself ! My power to humble any one opponent in battle will be trivial—compared to the authority of an emperor of a universe !”

Ron-Karr : “What a wonderful triumph, Nemesis Kid ! You are the greatest Leader the Legion of Super-Villains could ever wish for !”
Nemesis Kid : “Fool.” (Punches Karr in the eye.) “I am the ONLY Leader this Legion will ever have.”

“I knew it would come to this, ever since the day we both joined the Legion, Karate Kid. Your crude physical powers against my invincibility…the prize my alchemy gave me—to adapt the powers I needed to defeat any one foe. Remember that as you die—you are only a man—ONE man—for all your training—and that your death will open my reign over Orando…and a universe that waits !”

(To Karate Kid) “It took you a lifetime to gain your power, and me only seconds to acquire and better it.”

“What pride ! What stupidity ! You’ve seen my adaptations before. I’ve been outnumbered—but never beaten. You know I could defeat Superboy…kill Mon-El. What makes you think you’re so tough, Karate Kid ?”

“You presume to deny me ? I’ve beaten you, fool. Your Legion flight ring on my hand. My fist in your face. You’re dying. Your—life—is—over !”

“You’re really amusing, Projectra—I believe you’ve gone mad. I killed Karate Kid bare-handed—my Legion of Super-Villains has moved Orando out of your universe, beaten the Legionnaires—and you expect to scare me away ?”

Bonuses and Limitations:
See the “Incredible Power of Adaptation” section below.

Charisma Skill increased, Detect Power added with description since Adaptation was doing things it is not supposed to do, History section expanded and All Boni and Limitations moved to a separate section for clarity.

The Incredible Power of Adaptation

The Bonuses & Limitations for that Power of Nemesis kid are as follow : 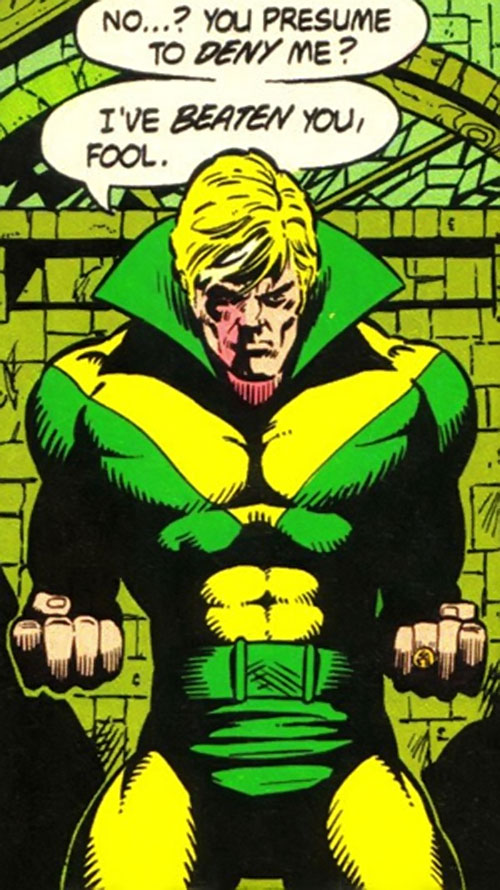 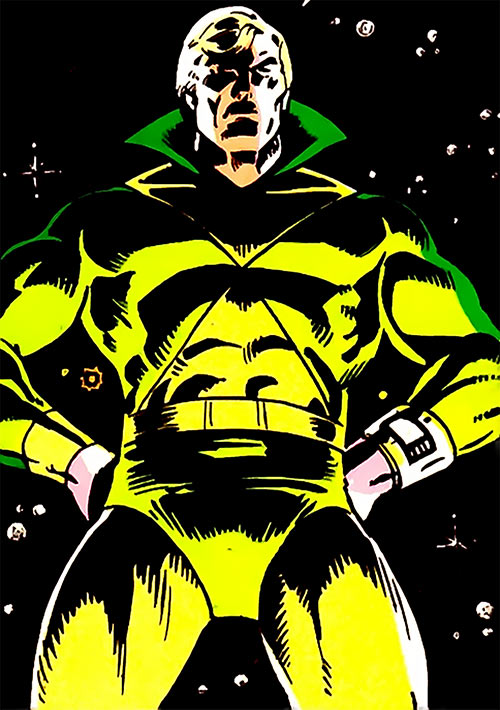 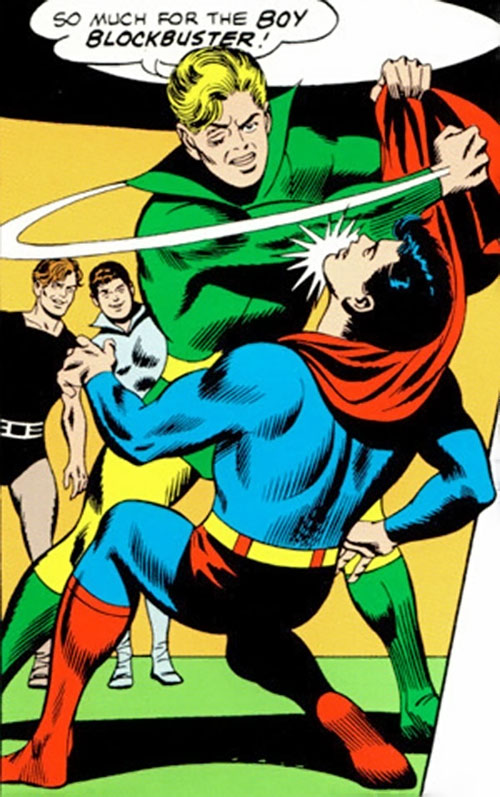 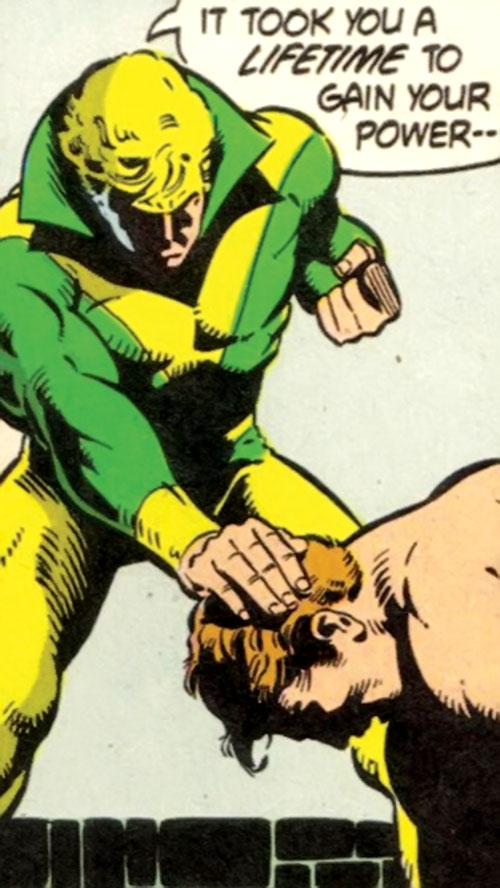