A big stompy mercenary with a big gun.

He appeared in an obscure Ultraverse book by Malibu Comics. But really we picked him since he’s so generic and easy to use.

Nero is a mercenary thug who once assaulted Warstrike and lost.

Nero wears a suit of power armor  (or is an armored cyborg – it is unclear). He is big and strong.

He has an array with four protruding apparatuses in the back. When he chooses a weapon the array rotates and connects the proper systems to his arm. Systems include :

Sounds very dumb, with halting speech and terrible grammar. Nero might be mentally handicapped or have a severe neurological speech impediment. 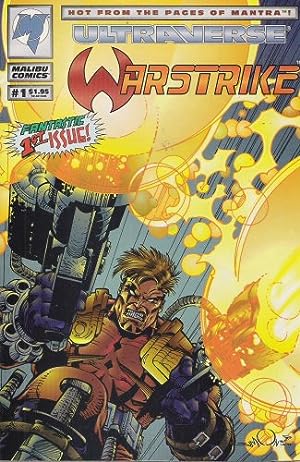