Neutrax is a member of the League of Super-Assassins, a team of legion of Super-Heroes enemies that appeared in 1979.

The League of Super-Assassins was based in the pre-Zero Hour 30th century of the DCU. But they are in continuity again as of this writing, as confirmed in Final Crisis: Legion of Three Worlds.

They are handy characters, useful in many campaigns. They’re deadly psychotic henchmen, comfortable working for a master villain but with an agenda of their own. They’ve got a handy array of abilities which allow them a lot of tactical choices. They excel at surprise attacks, but are less impressive when it comes to endurance.

I originally wrote up the LSA as a combination bribe/payback/thanks to Seb, but they could be useful in many campaigns. Just pick a criminal mastermind who could empower them and make them believe that your PCs are responsible for some tragedy, and set them loose.

Neutrax projects a beam of green energy from his eyes. It can neutralize the superpowers of his targets (in DC Heroes RPG terms, Neutralize). He can also injure or kill living beings by ’neutralizing‘ brainwaves, heartbeat, etc. (Energy Blast). 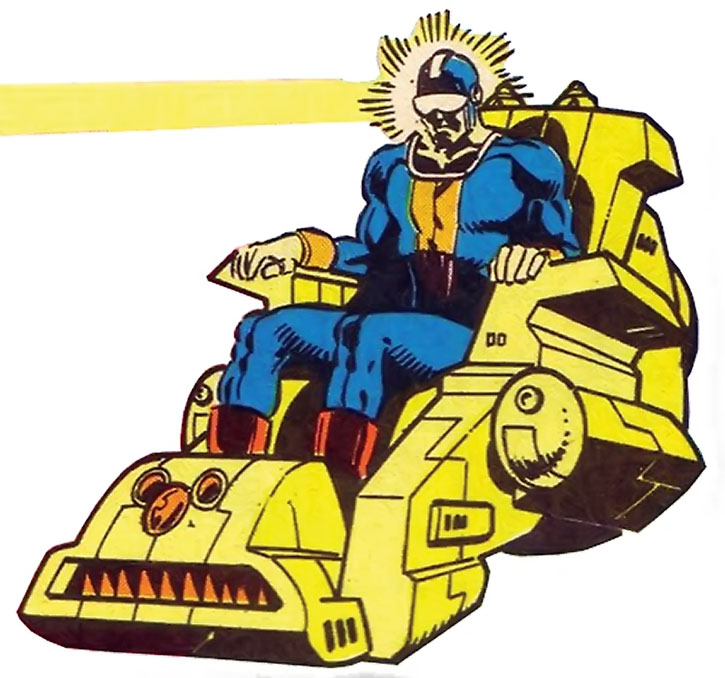 Like most denizens of the United Planets, Neutrax is comfortable on a spaceship (Vehicles SubSkills). He was one of the technicians who assisted Nemesis Kid and Zymyr in setting up the equipment which teleported the planet Orando. This implies some Skills in Gadgetry and Science.

Neutrax is apparently unable to walk. He maneuvers using a special anti-grav chair created for him by the Dark Man. Considering that 30th century technology is able to regenerate severed limbs, Neutrax’s disability is definitely fishy.

His various psychological hangups may have led to him declining treatment. Or at least this is my unsupported No-Prize  explanation, because after all why should Seb have all the fun? It’s more likely that Gerry Conway just didn’t think about the discrepancy when creating him.

Wi Kan Muur is one of six children (five humans and one alien rock creature) who blamed the Legion of Super-Heroes for the death of their homeworld.

The planet had been colonized by humans and named Korlon. But the colonists soon discovered that Korlon was already inhabited by a native race of sentient silicon-based beings. These rock beings called their world Dryad. Once the Dryads determined that the human colonists were peaceful, they revealed themselves. The humans and Dryads formed a harmonious and idyllic joint society.

End of the world

But that society was short-lived. Natural forces were leading to cataclysmic upheavals and the imminent destruction of the planet. The colonists appealed to the United Planets for aid, which sent ships and personnel. 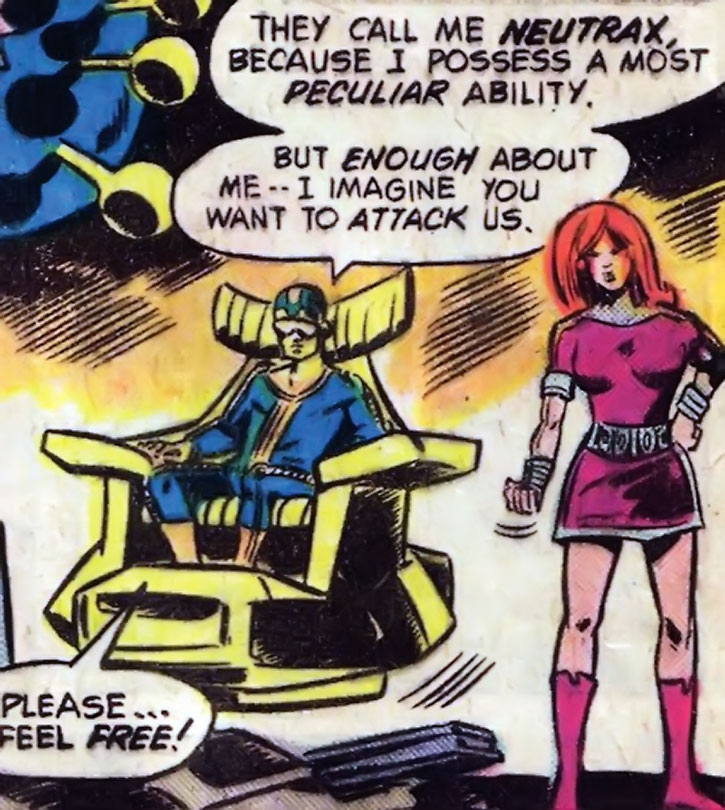 The planet was successfully evacuated, thanks in large part to the additional aid sent by the UP. The core of that force was a team of Legionnaires (Superboy, Phantom Girl, Colossal Boy, Ultra Boy, Light Lass, and Timber Wolf).

But Wi Kan Muur and his juvenile cousins were badly traumatized by these events. All their child-like minds absorbed was the terror of evacuation, horrible views of the destruction of the planet, and the prominence of six colorfully garbed figures. Thus, they blamed the latter for the whole thing.

Wi Kan Muur and the others became fixated on those six Legionnaires. They held them responsible for the death of their world and developed a pathological hatred of them.

About five years later, the now-teenaged Wi Kan Murr and his cousins were approached by a being they knew only as the Dark Man. A clone of old Legion foe Tharok, the Dark Man knew he would sooner or later be opposed by the Legion. Thus, he sought to weaken them. The hatred of the young Korlonians made them perfect for his plans.

Over the course of a year he granted the five humans super-powers. He renamed Wi Kan Muur “Neutrax”. The others were Lazon, Mist Master, Titania, and the Silver Slasher. These five, plus the young Dryad Blok, were now “The League of Super-Assassins”.

Superhumanly powerful, with a strong group identity based on their kinship and their pathological hatred of the Legionnaires, they were perfect for his plans. Giving them a starship, he sent them to Earth to assassinate the Legionnaires they hated.

It should be noted that there are several troubling discrepancies in the Super-Assassins’ story. They routinely address each other as “cousin” (Titania and Silver Slasher call each other “sister”). Including Blok, who is not Human.

Maybe that could be explained away. Maybe, for instance, the Korlonians and Dryads were so thoroughly integrated that they formed joint households and “adopted” each other as family. But when they first came to Earth, the Super-Assassins (including Blok) seemed unaware that Blok was not Human, and had not been granted his powers by the Dark Man.

Likewise, while the others all acknowledged the Dark Man as their benefactor and the source of their powers, they simultaneously blamed the Legion for robbing them of humanity. The Silver Slasher explicitly blamed the LSH for turning her into what she was, and for turning Blok into “a monster”.

The most likely explanation for all this is that the Dark Man, a telepathic vampire and super-scientific genius, brainwashed and mind-warped them as well as giving them powers.

En route to Earth the Super-Assassins were intercepted by a Science Police patrol craft. But Lazon easily destroyed it. With Earth’s defenses weakened by the aftermath of a Khund invasion, they were able to elude other patrols and make planetfall undetected.

Splitting up, the Super-Assassins ambushed their chosen targets, seemingly killing them. Neutrax and Titania teamed up against Phantom Girl and Ultra Boy. Neutrax apparently killed Phantom Girl by neutralizing her brainwaves. He then aided Titania against Ultra Boy by negating his invulnerability.

But Superboy’s super-senses had detected the Assassins before they launched their attacks. Because of Lazon’s power to become kryptonite radiation, Superboy didn’t dare take them on head-to-head. Instead he faked his death and that of his teammates. In actuality, each of the six targeted Legionnaires was placed in suspended animation while battling the Super-Assassins.

Meanwhile Superboy had alerted Brainiac 5 to the danger. Brainiac 5 recruited the Legion of Substitute Heroes for help. With his tactical guidance, the Subs turned the tables and ambushed the assassins. The Subs beat them soundly, and Brainy was then able to revive the Legionnaires.

All attempts to convince them that the Legion had helped save their people were useless. This lends support to the notion that the Dark Man had brainwashed them, permanently warping their minds.

But Blok, who has shown some resistance to human telepathy, did agree to help. Apparently his conditioning had faded. His assistance to the Legion was so valuable that he soon earned Legion membership.

The other five remained in prison a year or two more. Then they were teleported away to join the Legion of Super-Villains.

As part of the LSV, the Super-Assassins swore a blood oath to each kill at least one Legionnaire. They transferred their hatred for a few individual Legionnaires to the team as a whole. The five former Super-Assassins intended a special vengeance on Blok, who they believed had betrayed them.

After the defeat of the LSV, Neutrax was imprisoned on Takron-Galtos. When the prison planet was evacuated during the Crisis on Infinite Earths, he was transferred to the United Planets’ new prison world, Labyrinth. He was later seen battling the LSH during Final Crisis: Legion of Three Worlds.

Neutrax wears a costume which covers him from head to toe. His costume is primarily light blue with yellow vertical stripes, and yellow gloves, boots, and trunks. His cowl is blue with yellow underneath.

He wears visor-like goggles and is always seen in his anti-grav chair.

It’s been said that Neutrax’s mind has remarkable analytical capacities but stunted emotional expression. Most of the time he seems computer-efficient and cold-blooded. He reportedly expressed no emotion even when his legs were crushed during Dryad’s destruction. He is normally very quiet, a sign of disdain rather than shyness.

Like his fellow super-assassins, he’s mentally unbalanced. His conviction that the Legion destroyed Dryad is unshakable, and he ignores any evidence to the contrary.

His instability also manifests as intense arrogance. He believes himself superior to any opponent. He refuses to accept corrective surgery or prosthesis, which 30th century technology could easily provide, presumably seeing this as some kind of statement of protest. He elects instead to get around with the anti-gravity chair that the Dark Man gave him.

Despite his arrogance he does works well with his teammates, whether the Super-Assassins or the LSV. But whatever his reputed efficiency and composure, some irrationality does creep into his fighting tactics. He has no compunctions against killing, but he prefers to play with his opponents, neutralizing their powers and letting them struggle uselessly against his allies.

However, much of his sadistic calm is a front, dependent on maintaining a sense of control. When faced with unexplained phenomena or anything which threatens that control, he is easily rattled.

Thus, Brainiac 5 and the Substitute Heroes defeated him handily by, ironically, attacking from ambush. Color Kid’s power to create darkness allowed the Subs to stay hidden while waves of ice, fire, and writhing plants swept over Neutrax and the others. Neutrax was so unnerved that he panicked completely, as shown in the quotes below.

“You needn’t concern yourself about her, Legionnaire. I assure you, she’s quite dead. I killed her.”

“They call me Neutrax, because I possess a most peculiar ability. But enough about me… I imagine you want to attack us. Please, feel free !”

“How can I neutralize something that I can’t see ? These flames – and the cold – and the darkness – it’s all out of my control !”

“I’ve neutralized her power, Nemesis Kid. Shall I finish her ?”

Equipment:
FLIGHT CHAIR [STR 02 BODY 08, Flight: 04, R#: 0]. Neutrax presumably has access to LSV equipment allowing anti-grav flight and survival in space, but so far has not been seen using such technologies. He almost certainly wears a Transuit, though, as described in the Legion Equipment writeup.

During the League of Super-Assassins’ first attack on the LSH, Neutrax did not have access to LSV equipment. He had a CIH of Superboy, Ultra Boy, Phantom Girl, Colossal Boy, Timber Wolf, and Light Lass. That was later replaced by his MIH of the LSH as a whole.

Neutrax has relatively few appearances, and always as part of a mob of villains fighting a mob of heroes. There’s thus a lot of guesswork involved in doing a full writeup of him. This is especially true in his Gadgetry and Scientist Skills, which are only lightly hinted at in-story.

Helper(s): Andrew Lee (for help above and beyond the call of duty), Mayfair’s LSH v.1 Sourcebook for the 1st ed. writeup, Who’s Who in the Legion #3 (but don’t believe everything you read in it !). 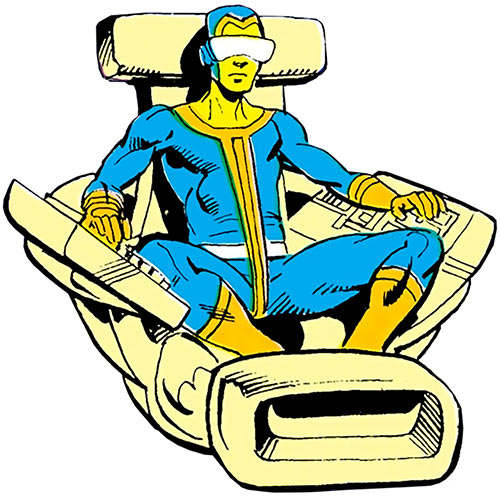 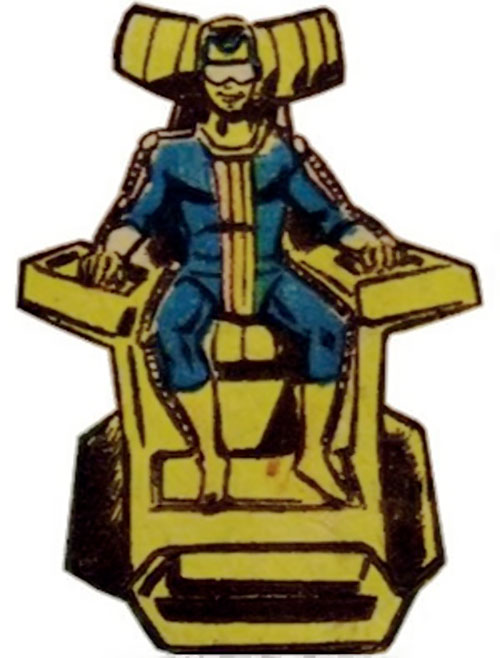 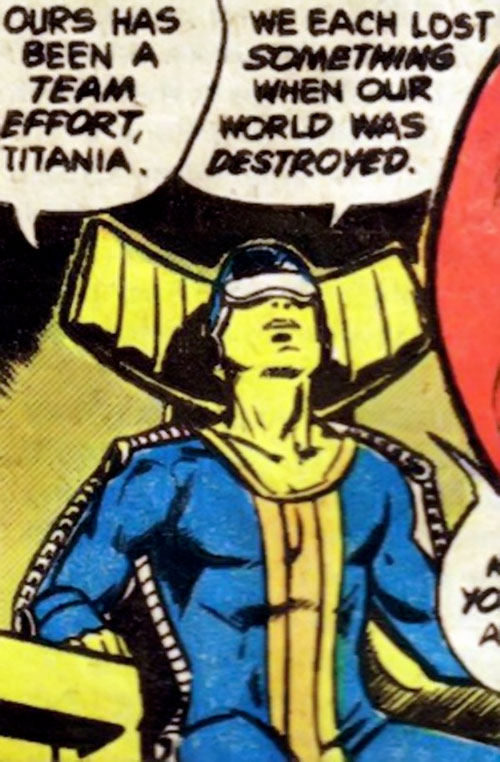 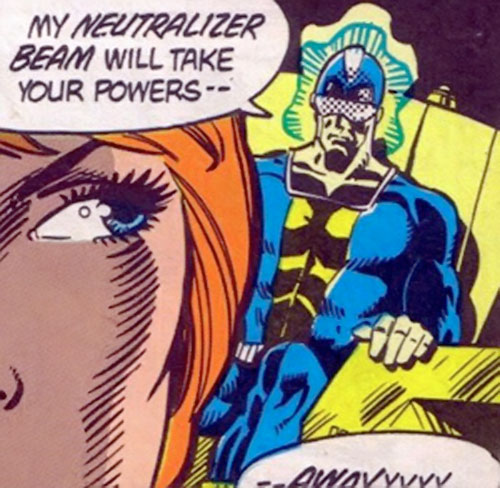