This profile is intended to be read after the Masters of Disaster team profile.

Which explains all the background.

“New Wave” was a vague name for early 1980s styles of pop music. It was sort of post-punk, but usually the word conflated bands doing pretty different things.

New-Wave can turn into a large mass of animated water. She can still talk and perceive as a liquid.

She also seems able to modify her humanoid appearance a bit. Usually to give herself gravity-defying hair and curves. And you can’t pull her down.

New-Wave is unhinged and murderous. This explosive temper contributes to her threat level.

Furthermore, she doesn’t afraid of nothing. She gets angry instead.

She’s an experienced, cautious criminal and mercenary. Her smarts and power of observation are robust. 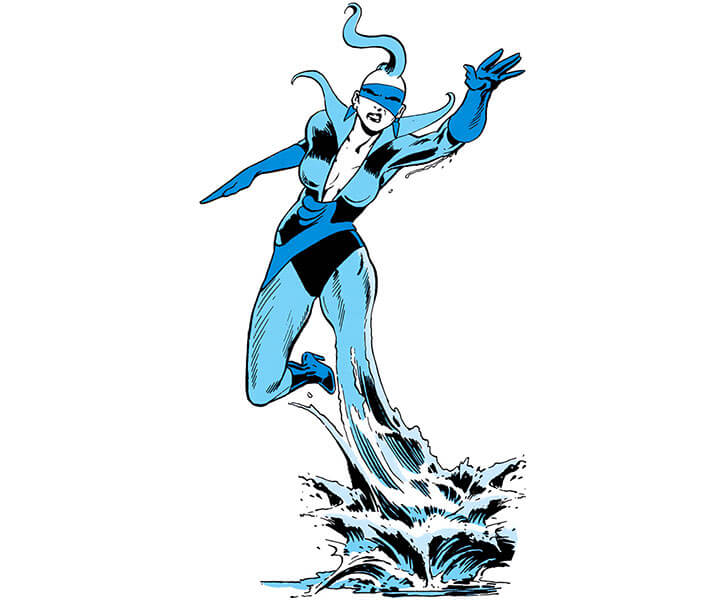 New-Wave can control her body even if it has been split into separate masses. But this requires extended concentration. Katana (Yamashiro Tatsu) once bought time by trapping part of New-Wave’s water into her empty glove.

Being mixed with soil and thus turned into mud deprives Jones of her powers until she can separate the two. This apparently takes hours.

She was also taken out when her water was combined with magnesium, with explosive results.

Her non-standard physiology doesn’t allow her to get pregnant. She might have other medical peculiarities due to this. There’s one vague implication of chronic health issues.

Past 2006, she looked like she had been through lengthy chemotherapy, and her eyes may have been damaged.

One stray remark implies that New-Wave built cloning facilities based on notes from Madame Ovary. She might thus have tech skills.

There just isn’t enough material to interpret this. I suspect this was just poor wording. 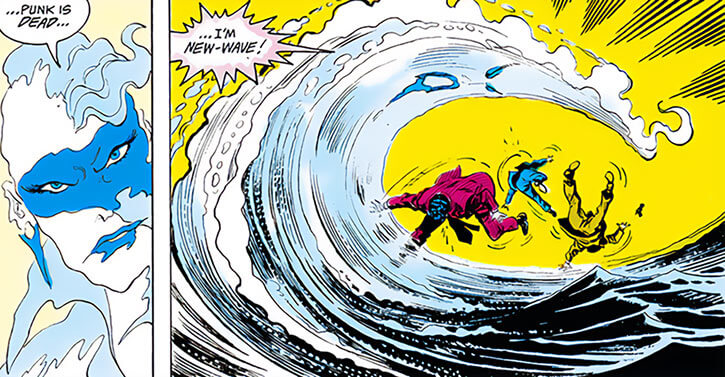 According to Rebecca Jones, her mother let her employer run a prenatal DNA experiment on her. Similar experiments were later carried out on her sister Wendy. This is what endowed them with their powers.

Becky Jones eventually murdered her mother in retaliation. She then ran away with her kid sister in tow.

Jones likely was the one who founded the Masters of Disaster, perhaps in the early 1980s.

After that, see the team profile.

Beyond enhancing her hairstyles and physique, New-Wave sometimes makes her eyes red (or rather, a dark magenta).

Starting in 2006, New Wave lost her hair and started wearing a bandanna over her eyes. As if to hide part of her face.

This may correspond to medical problems. Or this may be a fashion statement. Or it may be a reaction to what happened to her sister.

New-Wave is a cruel, arrogant, murderous psychopath. She hates being questioned, getting frustrated, or looking bad.

She’s overprotective of her sister (including against Shakedown’s advances), and keeps riding her hard in order to toughen her up. She’ll routinely threaten her.

She has on occasion tried to kill Wendy, though it’s unclear whether she’d actually do it.

After the Clone!Windfall plot, Rebecca Jones apparently walked out of Wendy’s life and left her alone.

New-Wave hates it when Wendy calls her Becky. She wants to only be called New-Wave.

Violence and threats are her native language, and she runs the Masters like a dictator.

She sometimes does water-based puns. Which all manage to sound menacing and sinister.

Windfall once implied that New-Wave was doing drugs. But it was ambiguous. She may have meant medical drugs rather than narcotics. 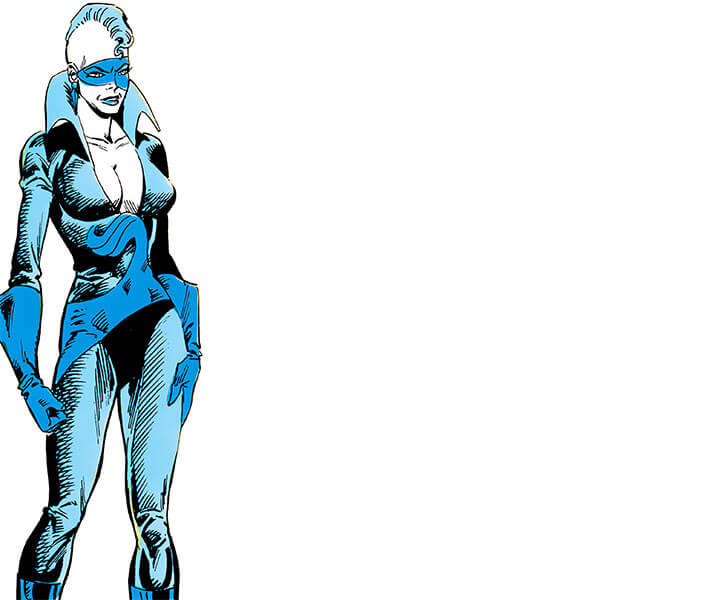 “Easy, boys. Shakedown here has just given you a free sample of why we’re called the Masters of Disaster. And I guarantee you won’t want any more !”

“The only way anyone leaves me is in a pine box !”

“You know, I’m not getting paid enough to deal with this crap. We were hired to disrupt the city, not to take part in someone’s stupid-ass war. Time to put an end to this, Masters of Disaster style !” (crashes a tidal wave ‘pon Markovia). 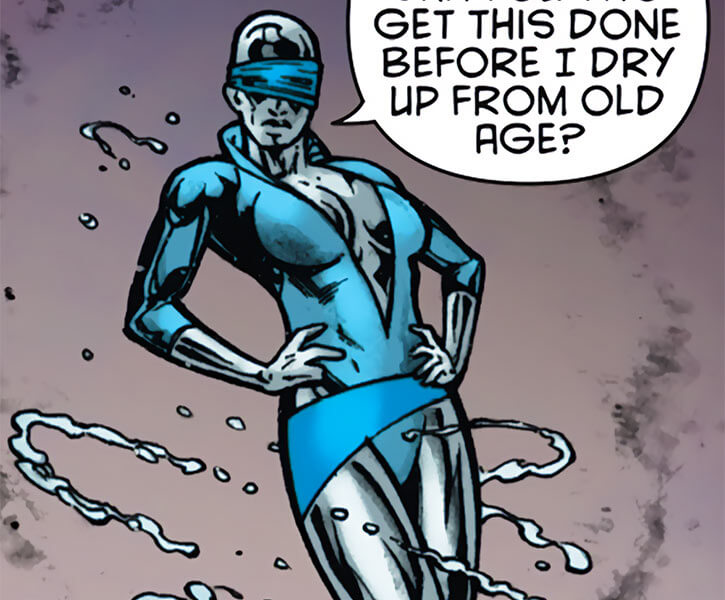 Leader of the MoD. 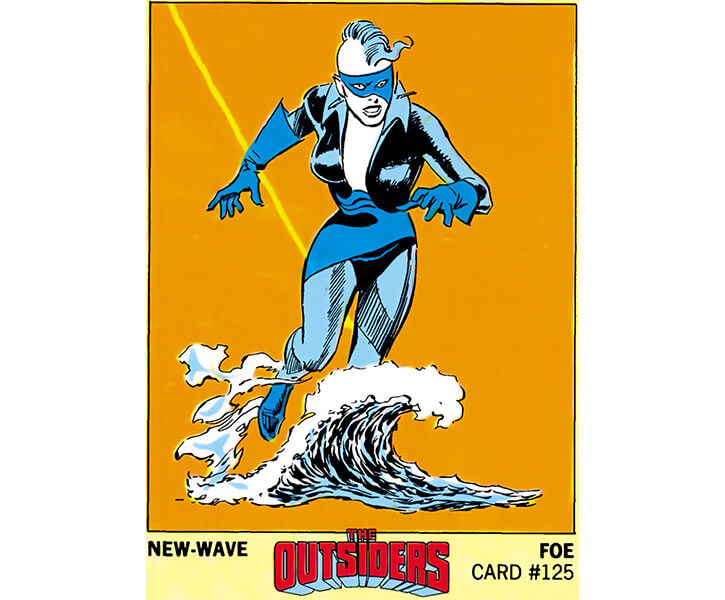 Another case where Fluid Form doesn’t *quite* model a fluid character. Especially since the applications must be at different AP levels to model what’s published.

Therefore I went for an effect-based approach, though Water control does most of the heavy lifting. And it looks more interesting that way than what I assumed. I wasn’t expecting the Growth and Shrink.

Water Freedom denotes that she can stay submerged until the sea cows come home. Linking it is an aesthetic choice. Water Freedom: 01 would be better value, but it looks cheesy and she’s not created on a budget.

Much of the stats block is inherited from Mayfair. It maybe a bit higher than what I would have spontaneously given her, but it reflects the material.

New-Wave tends to spend about half her Hero Points in a tactical, shrewd way. The rest will come into play if she has a fit of anger. Whether that occurs during any given story is random.

Which Physical and Energy attacks hurt New-Wave isn’t quite coherent. Her having a RV of 10 and a BODY of 05 sounds about right to reproduce this randomness in-game.

She could arguably have Military Science (Camouflage) in water form. But I think that’d be overkill.

(Since she’s targeting an inert mass, she can use her boosted EV as both AV and EV. Think of it as using STR/STR rather than DEX/STR to attack a wall.)

This models the large-scale feats she does in Joker’s Last Laugh or when flash-flooding the Markovian capital.

(This is clearly a hack and exploit. It’s not something I’d allow for a Player Character. But while that wasn’t the intent, this setup can replicate those feats of hers that exceed her normal power level.)

The low APs for Water Blast represent her seeming inability to engage flying opponents. We do see her using powerful water blasts at close range on another occasion. But mechanically, that one can be covered by Self-Link (Water Animation) doing the wave attack, just with different visuals.

(In fact it works better as Water Control, since in the clearest example she was hitting two targets.)