So, let me tell you how the writeups.org (WORG) project is going. No, no I insist.

This is the newest months-long death march. Such marches have been chaining since… 2014 or so (with breaks, thankfully) to make sitewide quality improvements.

I made a push early on, so that the tags results do not look like *complete* arse. But after the first 1,000+ entries, I’ve switched to a 20-a-day-on-most-days pace. So it doesn’t eat up the time for other tasks, such as writing.

A bit over ⅓ of the site is now tagged. There’s about seven man-months of tagging left, though in practice it’ll be more. Due to health, mostly.

As a reminder, the “home base” for tags is at https://www.writeups.org/tags/

Even after going through thousands (okay, two thousands) of entries, I still *like* tags. They allow you to explore the site along specific, intriguing angles you’re interested in. And bring up stuff you might never have thought about.

(There’s also a FAQ about ways of exploring the site, incidentally.)

Traffic and donations were a bit rocky in April and May, before mostly leaping back on track.

It would appear that a major pandemic and massive unemployment can distract people for a bit. And that “geez, I wonder how many APs of Growth Kamala Khan had early on ?” isn’t that high a priority in their lives.

We’re still doing tiny improvements in random entries as the opportunity comes up.

Recurrent themes in recent months have been :

Remember, writeups.org has a global audience. So that’s a lot of readers who do not have the crispest display to see web pages on. And/or for whom English is a second or third language.

We randomly realised that copies of Blood of Heroes: Special Edition  (which are normally much less expensive than DCH 3rd) are now selling on Amazon for about $100. Traditionally, it could be bought for a much more sensible $20.

In a tiny way it’s good. It means that people have been buying enough of these long-since-out-of-print-TTRPG-books to exhaust stocks.

More practically it’s a problem. Since one of our core goals is to introduce more players to the game. But it’s not one with a practical solution, though I hear there’s a niche retroclone coming up.

5/ On-site search is getting slow

Our in-site search engine has its own server instance. However, the traffic has grown enough that some searches can now take a while.

Basically, you get put in a short queue as the server goes through the search requests.

There isn’t a short-term solution. So it’s more of “yea, I’m aware of that” message.

And of course, as the site keeps getting bigger and nicer and more high-traffic, the budgets for the site overhauls grow considerably.

For now I’m still trying to delay a site evolution. In the hope that the WordPress development roadmap starts covering ground we can use. But that I’m not happy with our search page (which never could be finalised) and that it’s getting slow is a pressure against that.

6/ A reminder about WORG resources

I wasn’t going to mention it since it feels like kvetching. But a short reminder that WORG has far fewer resources than it might look.

At most points, manpower is one person on disability and a part-time person who freed up some writing-for-WORG-time. Lately this has mostly been Ethan.

If it feels like there’s more, it’s because the community has been doggedly keeping at it for 25 years.

Some people seem interested when I talk about these things… Those who don’t care about webmastering can stop reading now. 😺

So, here’s a SERP CTR graph from Sistrix.fr . 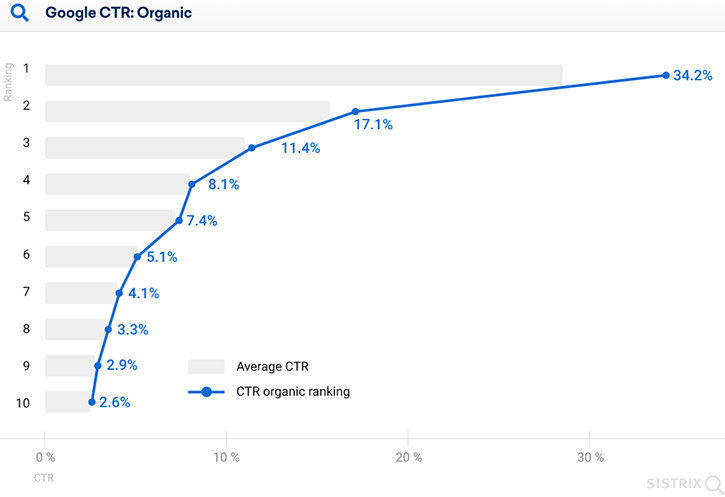 Without all the jargon – 34% of folks click on the first result of this example Google search, 17% on the second result, 11% on the third, etc..

This spread isn’t a typical one. Normally it’s closer to 29%/16%/11%. But this is the sort of spread you can expect when it comes to searches that bring up writeups.org pages.

Because a typical search engine result page (SERP) will go Wikipedia/Fandom/Fandom (the number of Fandom sites varies). Then you start seeing sites like Comicvine and Writeups.org, then smaller-scale sites and blogs.

And of course, the Wikipedia and Fandom brand recognition are zillions of times greater then B-list sites like Comicvine. Never mind C-list Writeups.org, whose marketing/brand development budget is precisely zero.

Hence an amusing situation. WORG stuff routinely ends in slot #4 or #5 of a Google SERP. Because we been around for 20+ years, and apparently Google considers that most of our articles are “quality” ones. Whatever that means.

In the commercial Internet world, scoring that well would result in a touchdown dance. But here it’s more of a “well, I guess it’s nice” position. 😺

Mind, that’s the good case. Another case is when a character goes mainstream. Say, Rocket Raccoon. At this point the entire big-budget entertainment commentary industry jumps in, and it’s buh-bye small and medium sites.

So that’s an important reason why you see so many sites sinking money into video, into newsletters, into social media reps, into highly-targeted ads (à la Facebook), into whatever. The good ol’ approach of yesteryear (“write good and they’ll come”) has just decayed too badly.

(There’s also a whole discussion about how Google has become bad at letting you actually find sites, but that one’s real complicated).