These are vintage notes about the spaceship used by Nexus. See the Nexus character profile for a smidgen more context. He was one of the more notable indie comic book characters of the 1980s and had endured since.

Mike Baron describes the method of interstellar travel in NEXUS TWO. In summary, the ship matches the velocity of a black holes rotation and enters an aperture which is a gateway to another region of space. To reflect this, I propose the use of the dimension travel power to access hyperspace (Dimension Travel distance: 1).

Along with his powers, Nexus’ ship was another “gift” from the Merk. Nexus is now on his second ship, the first was destroyed in the bowl shaped world after sliding thousands of miles along it’s side to the bottom (See NEXUS #6). The second ship appeared out of thin air and NEXUS has been using it ever since (See NEXUS #9).

Like Nexus, the ship draws its power from the same sources and is powerless when Nexus is, as on the bowl shaped world for instance.

The ship functions as Nexus’ primary means of interplanetary travel but is seldom used for battle. It is virtually unstoppable though, and has been used to ram through an opponent to reach Nexus’ objective (See First’s THE ORIGINAL NEXUS collection where Nexus rams through one of Zieffer Meird’s battle cruisers).

Sleek and graceful are the two words that most accurately describe Nexus’ ship. The ship is roughly 60 feet in length with an interior width of roughly 20 feet and a wingspan of roughly 50 feet.

Inside the ship has six compartment, the bridge, the kitchen, Nexus’ bedroom and private study (complete with waterbed), the bathroom, the library, and the storage area which can be converted into spare bedrooms as required. (Deck plans can be found in Dark Horse’s NEXUS TWO reprint collection.) 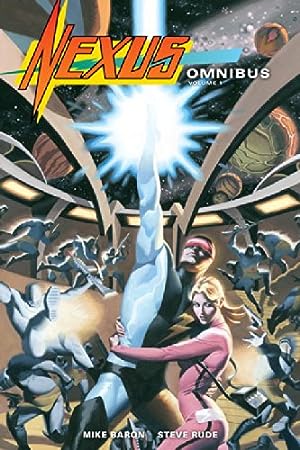