N’Gamo is an obscure Black Panther enemy, first seen in 1969. He’s a henchman of the Man-Ape (M’Baku), so it’s best to read M’Baku’s character profile first.

This character has but three small appearances, and some colonial-era narrative clichés clinging to him. So pumpin’ out a writeup for him wasn’t a priority. However :

N’Gamo is short and rotund. However, he seems to be in decent shape – it’s just that he’s thick.

Being Jabari, he’s trained in wielding ancestral melee weapons, such as spears or spiked cudgels. He likely has some training with firearms, but the Jabari prefer not using these.

He’s a priest of the White Gorilla, though what he actually does is unrevealed.

N’Gamo proved to be a good getaway pilot. When spiriting away M’Baku from Avengers’ Mansion, he was piloting a high-tech helicopter. He even managed to daze Giant-Man by dropping the rapid extraction rig intended for the Man-Ape onto Dr. Pym’s head.

He may also have been the person who built a realistic mannequin of Monica Lynne. That fooled even the Panther. 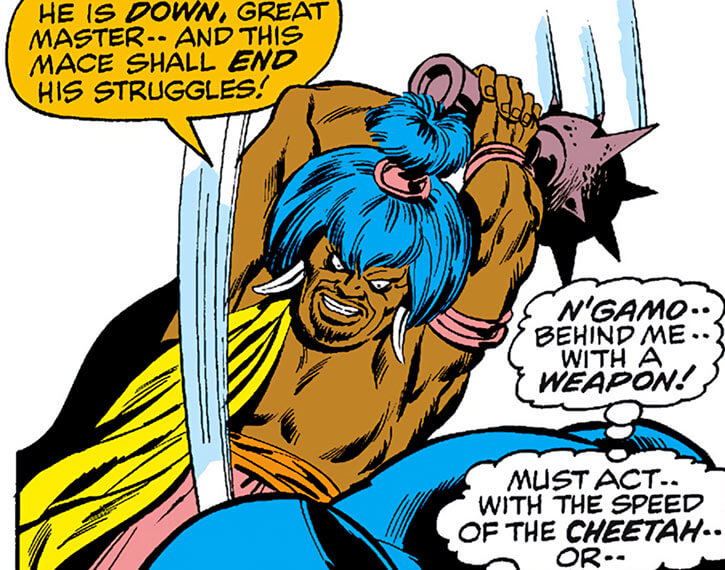 N’Gamo is some sort of alchemist. He can prepare potions and other liquids that may have supernatural properties.

The clearest example was brewing a tasteless solution which made all the Avengers (including the synthesoidAn artificial being built using organic-like tissues, rather than robot-like hardware Vision !) fall asleep within seconds.

The potions need not be supernatural, of course. The Vision has demonstrated more vulnerability to toxins — such as knockout gas — than you’d expect from a person with such a non-standard biochemical makeup. So it might just be that N’Gamo is a competent biochemist, using Wakandan scientific knowledge.

And there’s the following incident.

N’Gamo once revived M’Baku, who had been crushed under tonnes of stone blocks. The dialogue implies that M’Baku had been declared dead, and T’Challa hypothesised that N’Gamo knew of “secret herbs” to essentially resurrect his chief.

One can also imagine that there was a lot of medical and/or magical work to heal shattered bones. But M’Baku apparently went from “declared dead” to “tip top shape” within a year or so.

Wakanda is documented as having herbs with supernatural properties, due to the land’s unique magical characteristics. The primary example is of course the heart-shaped secret herb used to empower the Black Panther.

So it’s likely that N’Gamo can perform magical healings and other rituals – but that it takes years of preparation to grow such herbs. And access to Jabari holy sites where these are cultivated. 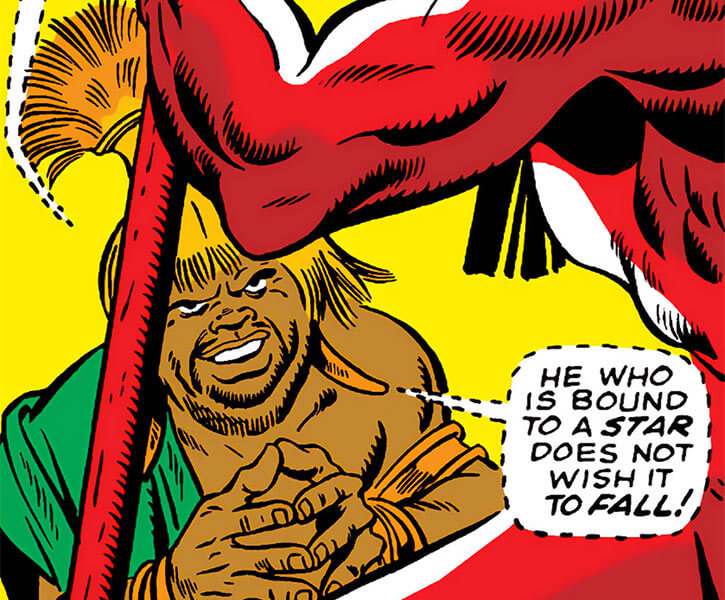 N’Gamo is a Jabari priest of the White Gorilla. During M’Baku’s 1969 coup, he was the usurper’s crafty, devious right-hand man.

When the Black Panther (T’Challa) returned to Wakanda with the Avengers, M’Baku pretended that it all was a misunderstanding. He threw a feast for the King and his allies… and had N’Gamo poison the wine. His aide’s potions knocked out the mighty Avengers within a few sips.

This cleared the way for M’Baku and T’Challa to have their big duel for the Wakandan throne. The Panther narrowly prevailed after a huge stone statue of Bast fell upon the Ape.

During the fight, N’Gamo attempted to rush T’Challa from behind with a spear. But the Panther heard him, and sent him flying.

N’Gamo recovered M’Baku’s seeming corpse, presumably because he was a priest… and healed him using secret Jabari compounds.

In 1970, M’Baku travelled to the US to take another shot at T’Challa – and N’Gamo assisted him.

Since even the Man-Ape couldn’t take on the entire Avengers, they allied with the Grim Reaper (Eric Williams)’s Lethal Legion. The other members were the Living Laser (Arthur Parks), Power Man (Erik Josten) and the Swordsman (Jacques Duquesne).

The pair still made an attempt on their own, but ran into the Avengers. N’Gamo evacuated his chief with a “jet-propelled ‘copter” (likely provided by the Lethal Legion) before the Avengers could gang up on him.

They then kidnapped T’Challa’s friend Monica Lynn, drawing the Panther into a trap. This worked, but they couldn’t execute T’Challa right away due to their deal with the Grim Reaper.

N’Gamo wasn’t present during the big fight between the Legion and the Avengers. Presumably the Man-Ape kept N’Gamo in reserve as he did not trust the unbalanced, racist Reaper.

Return to the Crystal Forest

It is unclear whether N’Gamo remained M’Baku’s henchman after the first Lethal Legion was defeated.

My sense is that he escaped. But it is entirely possible that he was arrested, deported and imprisoned.

N’Gamo made a cameo in 2009, working with M’Baku and on Jabari land. That was a short time after Malice (Nakia) snuck M’Baku back into Wakanda. So Nakia and/or M’Baku might have freed N’Gamo early on.

Or perhaps he had just been living in the Crystal Forest all along.

In return for her help, Nakia wanted M’Baku to kill a Dora Milaje she hated – Chanté Brown. M’Baku had little problem with that, detesting Brown for her apparent American origins.

However, N’Gamo came running to reveal that Ms. Brown’s actual name was Ce’athauna Asira Davin. She was the hidden daughter of an important Jabari leader, and pretty much sacred.

Though M’Baku had some trouble believing N’Gamo’s out-of-the-blue revelation, he soon had to admit that his faithful helper was correct, dagnabit. 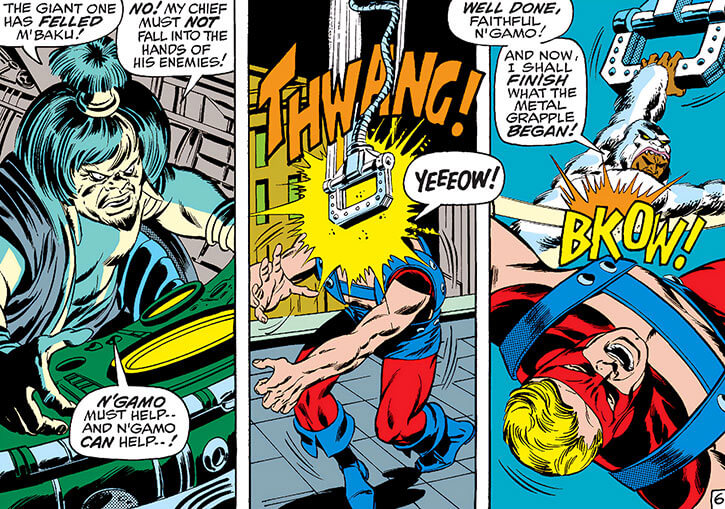 N’Gamo wears a distinctive headdress made from unclear material. It *might* have been inspired by some ceremonial hats in Southern Africa. For instance the Kwazulu-Natal cultural museum  has some feather headdresses with a comparable silhouette in its collections.

He also had huge, tusk-shaped earrings. These may have been canines from Crystal Forest giant gorillas.

T’Challa describes N’Gamo as “dwarfish”, but that seems to be an exaggeration. He ain’t tall, sure. Especially when next to the hulking M’Baku. But he seems to be about the same height as Monica Lynne.

When seen in 2009 N’Gamo had straightened hair worn to the shoulders, a small goatee and moustache, and the usual Inuit-style Arctic weather garb of the Crystal Forest Jabari.

He was mostly the devious lieutenant type – but obviously smart, and confident.

He acted respectful of M’Baku, but not quite deferential. He acknowledged Man-Ape as his chief, but his dialogue also hinted as this being an alliance, freely entered. And their shared priority was defending the White Gorilla faith and the Jabari ways.

N’Gamo has no problem with entering a fight, but also has a realistic view of what he can achieve against superhumans. He’ll therefore attempt Blindside Attacks.

“It will be done, o M’Baku. He who is bound to a star does not wish it to fall.”

“Yes, my chief ! With infinite relish !”

A standard spear, or a standard spiked club. Possibly a high-tech Wakandan vehicle if there’s no reasonable alternative.

Stats are largely arbitrary due to lack of material, of course.

So yes, he can seemingly resurrect the dead. But both this and the sleep potion were forged in plotdevicium, which is why I’m reluctant to assign stats. The Scholar with herbs does the heavy lifting in allowing him to reach high enough APs for artefact-making that it’s explainable, though.

As always with resurrection plot devices, we can postulate that there are stringent limitations explaining why he doesn’t run around resurrecting everyone. My go-to hypothesis would be that it only works if you’ve been fed hard-to-grow Gorilla sacred herbs all your life.

Helper(s): The spirit of the great gorilla.