The Scary N’Garai Demon is a physical juggernaut. He was able to shred any physical obstacle in its path.

It is stronger than Colossus was at that time, and could take immense amounts of punishment. The demon went through the X-Men’s danger room, set at maximum lethality, and wasn’t stopped. In fact it wrecked it so badly it took the X-Men months to rebuild it.

The demon was also very smart. Despite being a complete alien, it out manoeuvred Kitty Pryde by predicting what she would do on several instances. It also seemed able to deduce the function of the technology used against it. And it was able to track her down to an extent, despite her phasing .

The N’Garai are the best-known race of elder demons in the Marvel Universe. They dominated the Earth at one or several points in distant prehistory. They are scary, completely alien, smart and powerful demons who would destroy everything if it were not for the valiant efforts of various Sorcerers Supreme and others along the millennia.

They are often portrayed as the antithesis of life as we know it.

Early in the career of the All-new, All-different X-Men, Storm encountered a N’Garai gateway in Westchester county. She fought valiantly, but was overcome by a throng of N’Garai grunts who started pulling her into the gateway.

Her will bolstered by her claustrophobia and humanity’s instinctive fear of the N’Garai, she summoned a titanic lightning bolt; It pretty much obliterated the gateway and seemingly closed it. 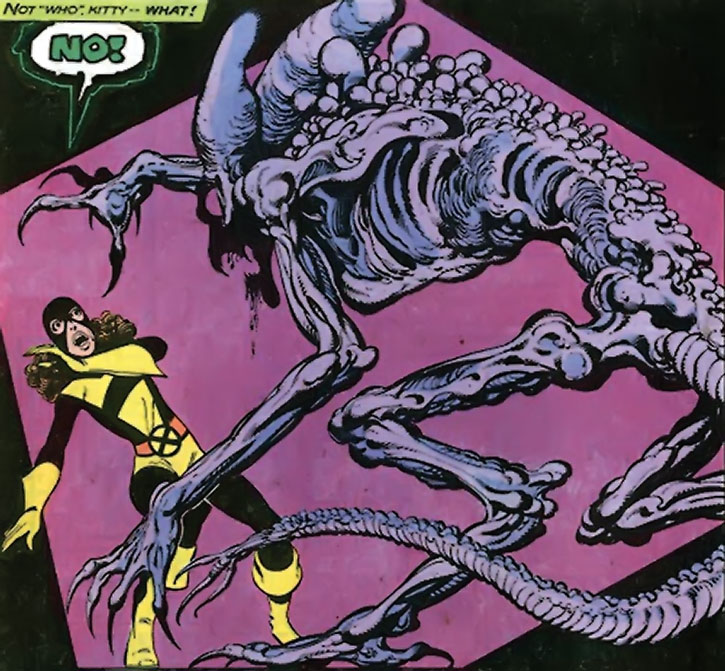 Yet, the gateway retained a tiny amount of power. Thus, several months later, a big N’Garai demon crawled out of it. After murdering several persons in the immediate era, it homed in on the X-Men’s mansion just in time for Hanukkah .

Kitty Pryde was at that time the sole person in the house. The intent of the demon was apparently to slaughter her, then lay an ambush for the X-Men when they would return.

The demon and Kitty fought to the death, using every resource at their disposal. Kitty ultimately slew the demon by catching it point-blank in the direct exhaust of the Blackbird’s  full strength reactors and afterburner. This is generally considered the point where she stopped being just a kid and became an X-Man.

However, the plane and much of the mansion were left a heap of smoking ruins. It likely was the most expensive Hanukkah ever.

The DCU has more demons than you can shake a big stick at, so this one will fit in fine as one of the Pre-Dead. He even has that general Abnegazar/Rath/Ghast look !

Bonuses and Limitations:
Spiritual drain has No Range. 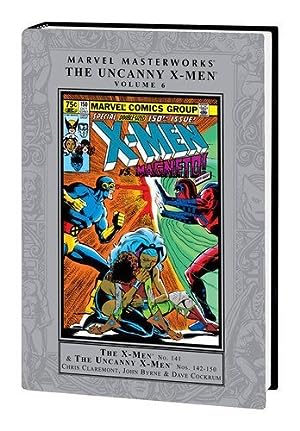 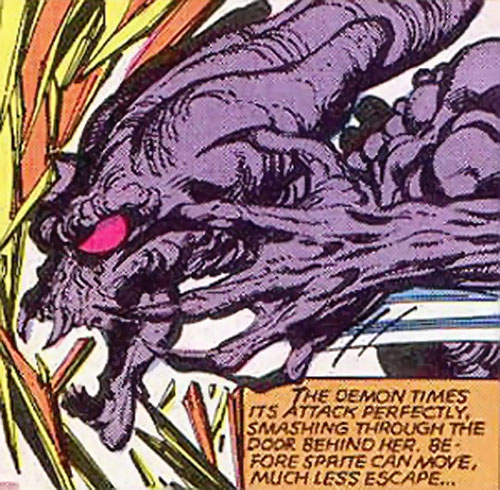