Even a horde of ordinary medieval fighters would probably just get crushed. The Damned has ravaged entire villages as people panicked and were killed by collapsing buildings.

For heroic fantasy adventurers who do not pack considerable magical wallop, N’Hglthss is a sort of mini-Gojira that cannot be met with conventional force. Extraordinary measures (and a quest, of course) will be necessary to kill him.

Dogs were mutated by proximity to N’Hglthss. They became ravenous pack animals with a vaguely reptilian look. They seemed to retain their basic stats, plus one AP of Skin Armour, but used dangerous wolf-like pack tactics.

Since the dogs were oddly numerous, I would suspect that they also mutated to acquire Split: 02 with the No Stats Degradation For Dupes Bonus. This would also explain why they fought fearlessly until they took enough casualties that the originals, rather than the expandable dupes, risked being killed.

A horse was also mutated by N’Hglthss. But though it now looked strange it still behaved just like a domesticated horse.

N’Hglthss the Damned is a sort of chaos giant coming from one of the seven voids of the Fifteen Worlds cosmology. His origin is unknown, but he apparently exists in the void between more formed dimensions . Given the mutagenic nature of the void he may have been an ordinary human person a long time ago.

An agent of chaos, King Occulas of the Yellow Eye, had his court magician Miftung summon N’Hglthss to the land of Pytharia. The goal was to kill his foe Claw the Unconquered. The summoning took hours, since it required opening a dimensional huge breach.

Supernatural phenomena abounded around the forming rift, such as black and sulphurous rains. N’Hglthss eventually stepped through, and right on target – within a hundred metres of Claw and his ally Prince Ghilkyn.

N’Hglthss never even felt the blows from the two adventurers. The best that even Claw managed was to trip the giant by ramming a spear through his feet and into the ground, nailing him there for a bit.

A local took them to the oracle Asvitar the Burning Man to learn how to destroy the Damned. The two adventurers embarked on a quest to find a magic sword that could do the deed.

While the Unconquered and Ghilkyn were toiling and riding, N’Hglthss continued to meander aimlessly through Pytharia. He ravaged and withered anything he blindly came across.

He was eventually brought down by Claw using the sword Moonthorn, forged by the gods of law for his hand.

N’Hglthss looked a bit different during his second set of appearances. Yellower and more… mineral, as can be seen in the illustrations.

It was presumably the result of a change in art style. But it is quite possible that N’Hglthss the Damned is slowly mutating, being a chaos creature.

N’Hglthss the Damned is probably a person. But he’s plunged into a permanent haze-like torpor and doesn’t really perceive the world around him.

He just shambles blindly without quite perceiving the ravages he inflicts. Some of his actions seem to be very slllooowwwwwww attempts at identifying what is around him before what little mind he has available wanders off.

He animated the dead with but a gesture when confusedly realising there might be something attacking him. Thus, he may have been a necromancer who botched a spell once and was cast into the teratogenic void.

Drawbacks:
Strange Appearance, Attack Vulnerability (-1CS OV/RV vs. Elder Light artefacts), Misc.: N’Hglthss is plunged into a perpetual stupor, hence his abysmal INT, WIL, INF and AUR (note that these scores are zero, not an absence of score as with some non-living beings). He has very little initiative, and his movement speed is capped at 03 since he just shambles.

The one known example of creature reanimated by N’Hglthss were large carrion birds. But this entry assumes that he could have reanimated other carrion-eaters.

These foul feathered fiends had a deadly dagger-like beak. They would attack relentlessly anything that lived until destroyed. There were more than a score of them, and though they didn’t Team Attack that was enough to give Claw and Ghilkyn and long, dangerous fight.

One panel vaguely gave the impression that carrion-eaters are mystically attracted toward N’Hglthss to die, like moths to a flame. But this is probably reaching. Perhaps N’Hglthss has an aroma like carrion. Or perhaps the birds were there because the phenomena surrounding the opening of the gate attracted them.

An individual undead carrion bird has the following stats : 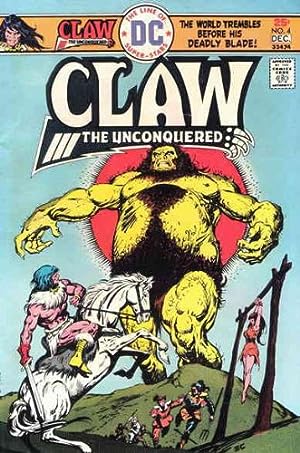 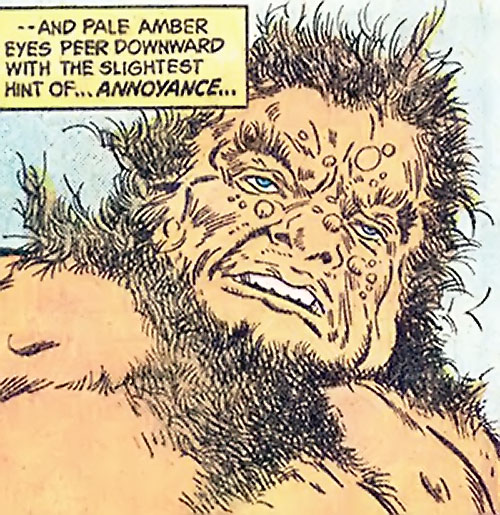 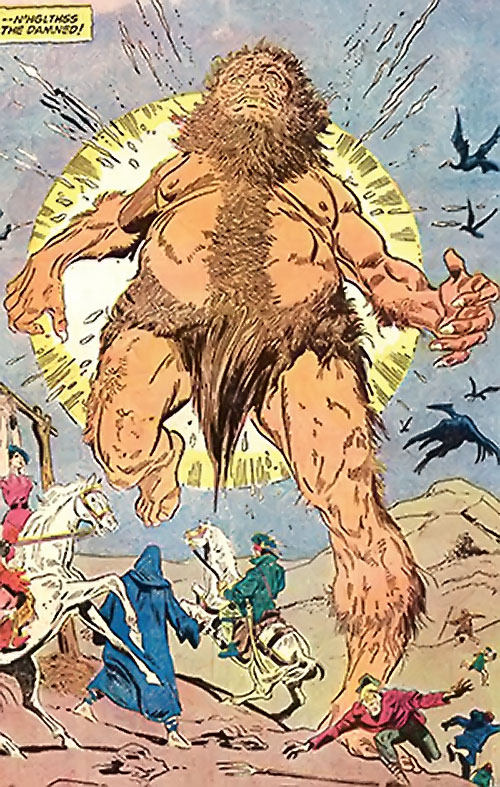 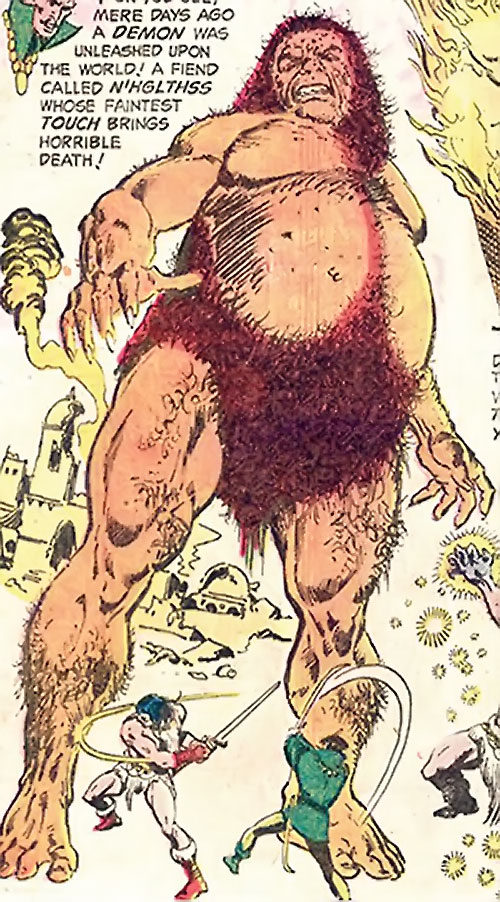 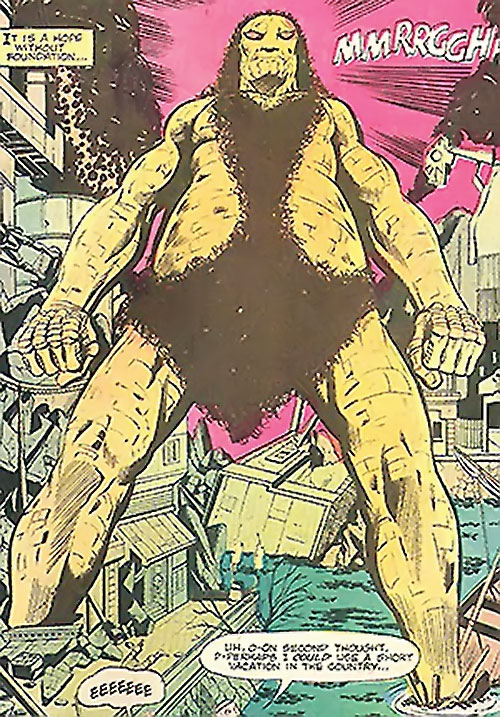