Nick has the reputation of being a damn good courier. That’s because he survives the hellish wastelands and gets the job done.

He is a superior driver, improvised tactician, knowledgeable about the best routes, an able mechanic and possesses iron nerves.

The end isn’t near, it’s here. America has become a wasteland, leaving the few cities that remain transformed into impenetrable fortresses. Beyond these walls lies The Zone, a brutal, plague-ravaged, barren landscape stretching from one former American city to the next.

These are the areas that were ravaged by plagues of unknown origins and nuclear weapons. The population was reduced to nothing but mutants, monsters, and warring factions of survivors driven insane by disease and starvation. 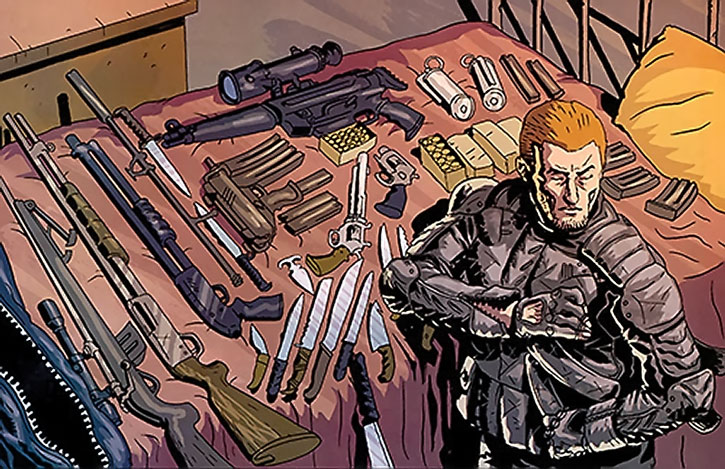 Only the very brave or the very foolish voluntarily step foot outside the protective confines of the mega-cities. Nick Masters happens to be a little bit of both, but he doesn’t traverse the Zone without purpose; he is a courier.

When society broke down, so did its various forms of organized transportation. Now, if you need something picked-up, delivered, or disposed of, you have to hire a rogue driver to carry your cargo through the treacherous terrain of the Zone. A driver like Nick is your man, one of the very best – and he’s all business.

Unfortunately for Nick, business sometimes becomes extremely personal. After failing to deliver a package to a local crime lord, Nick was forced to take on a suicide mission in order to save his sister from the disappointed client.

Only one man earlier had successfully navigated the “Dead Run,” the 350-plus mile expanse between what’s left of Los Angeles and San Francisco. He was a geezer named Waylon Biggs.

Instead saddled with Waylon’s daughter, Becki, who wanted to reach San Francisco to donate blood to her sick mother, Nick sets out on the Dead Run. Nick and Becki try to find their way from L.A. to S.F., fighting off bands of mutants along the way. Eventually, when Nick unwittingly drives over a land mine his car explodes. In the aftermath Becki is captured.

Becki was caged and transported to a buyer, an insane mutant doctor. While mutants haggled over Becki, Nick was faced with a decision. Should he put his sister in further danger by straying from the Dead Run in order to save Becki, or should he abandon his passenger and continue on alone in order to save his sister as quickly as possible? 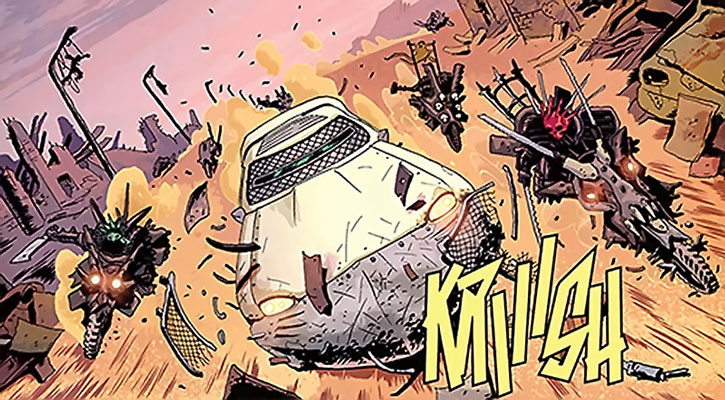 In the end he managed to save Becki and they continued the journey. Realizing that they were transporting a nuclear bomb that would automatically go on as they entered San Francisco, Nick chose to return the packet to the sender.

Nick threatens to blow up both the drug lord and post-Apocalyptic Los Angeles unless his sister is released. The drug lord surrenders, releases Nick’s sister and is then arrested by the non-corrupt half of the police force. Nick is hailed as a hero and continues his delivery job.

Becki has since joined the post-apocalyptic adventures in best Mad Max spirit as his cartographer and mechanic with the first destination being San Francisco, followed by who knows what.

In order to survive in the wastelands it is necessary to be well equipped and prepared. Nick uses a heavily modified courier car that comes with protection and in-built weapons. Its registration plates read ’No Way‘. It has very thick armor, reinforced tires (with a BODY of 06 APs) and a fully functioning Geiger counter.

Of course, the wasteland always has a rather high background radiation, but certain zones are much worse and directly lethal for anyone, human or mutant, to enter. This is where the counter comes in handy.

Nick knows most road networks in the former Western USA (in particular Las Vegas, Los Angeles and Phoenix). The ones he doesn’t know, like the San Francisco area, his “sidekick”Becki handles. That’s why she often gets the thankless job of being the cartographer.

However, they both know well known landmarks, such as the huge, heavily radioactive canyon between San Francisco and Los Angeles called the Sink. Like all professional couriers, Nick has his own pass that will allow him entrance to all larger, walled cities.

The greatest danger of the zones is gangs of mutants, usually referred to as Zone Drones. These rather inhumanly looking savages drive motor cycles and wear odd looking leather armor. They carry home-made or improvised weapons and stuff like spears, knives, chainsaws, pitchforks and in some cases guns. 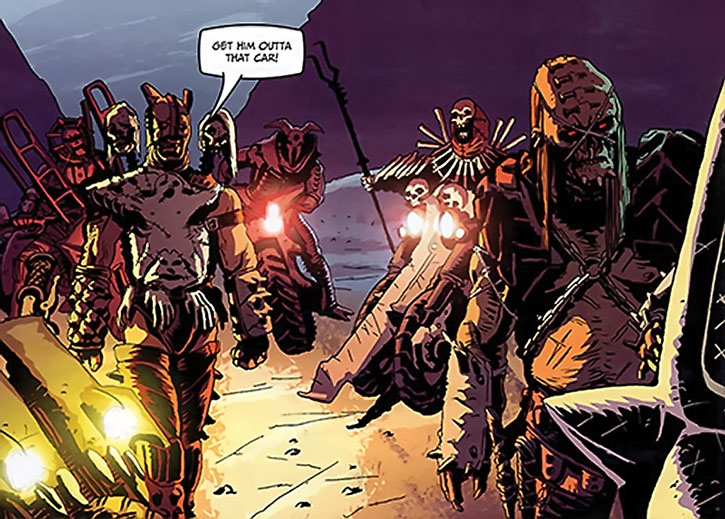 The Drones savagely seem to prefer melee combat and behave in extremely aggressive ways. Drivers will be killed, flayed, robbed and worse; expect no pity. Because of this, most people consider entering any wasteland area a direct death sentence. Those who enter come well prepared, like Nick.

If pursued, Nick will set up a trap, outrun the opponents in dangerous terrain or simply open the roof and fire away using a huge hand-held railgun (Projectile Weapons: 09) and hand grenades, both that are normally stored on the back seats.

His cars also includes a heavy-duty caltrops dispenser called the “bricklayer”. It probably has a semi-automated machinegun and flamethrower (based on the logo of the switches on the dashboard).

When parking the car, Nick can activate a booby trap that fries anybody that touches the door handles (Lightning (No Range): 06).

When coming up on a road block he usually drives right through it, having an armored and very powerful car. Also, being a superior driver, he sometimes turns the lights off in the middle of night while driving to shake off any pursuers.

When desperate in the night, Nick employs a rather elaborate tactic he refers to as night-blinding the opponents. He turns the car around, lights the lights on full power and then puts himself in front of the lights, either standing or riding another smaller vehicle.

He attaches a metal wire from his own car to his belt. Any fast incoming pursuer will be severely blinded for a few turns and temporarily receive either a -1 CS penalty to all Physical Actions, including attacking and defending, or a Flash attack of 05 APs (this trick turns the Glow into a Flash).

Naturally, they can’t really see the road behind the car either. In fact, the car is usually parked at the edge of a cliff, and once the pursuers choose to drive past the vehicle to catch an apparently fleeing Nick they drive down into doom. Nick is saved by the wire and then climbs back up to fight the few if any remaining opponents or simply shoots them as they peer out over the cliff’s edge.

A very daring maneuver, one that usually pays huge dividends and that should net him a small Hero Points  award.

Nick is a fairly ordinary looking man who is usually clad in black leather and is sometimes wearing a helmet. When relaxed, he removes the jacket and underneath wears a red t-shirt with a skull motif or a black t-shirt with the text zone survivor plus a pair of fingerless gloves.

He is often seen with a cigarette in his mouth. Most of the time, he will be driving his car.

Nick is a veteran courier. As such, he has seen most of the evils that exist in the wastelands.

He is a master of improvisation and combat tactics, and will almost flawlessly carry through his plans with nerves of steel. He actually seems to enjoy risking his life, and is clearly on an adrenaline high after combat. 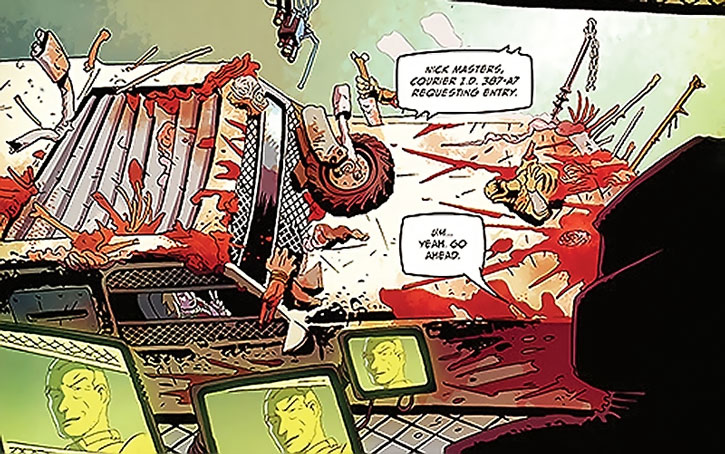 Doing most of his life on the roads, he is rather proud of his car, and sees it as an extension of himself. He has upgraded it into a powerful transportation and combat machine. Nobody is allowed to drive it except for him and nobody does it better. Well, except Becki will take over the wheels when needed.

Despite his background he is kind and generous to his friends and family. He will always help them in emergencies, and will even help almost-strangers due to a sense of civility. He has fine arguments with the much younger Becki, who later became something of a sidekick.

Although they initially clashed pretty much all the time, they have grown into something of fighting buddies, although they still argue. Although mostly used to taking care of himself, he will go to great lengths to protect her as well.

He does have a strong sense of responsibility. When he realized that he was carrying a nuclear bomb in his car from Los Angeles that would detonate upon him entering San Francisco, he aborted his run. Leaving the bomb in the wasteland would be irresponsible and not an option. Blowing up San Francisco was unacceptable.

So, the only option was to return to Los Angeles and threaten his client with the bomb itself. 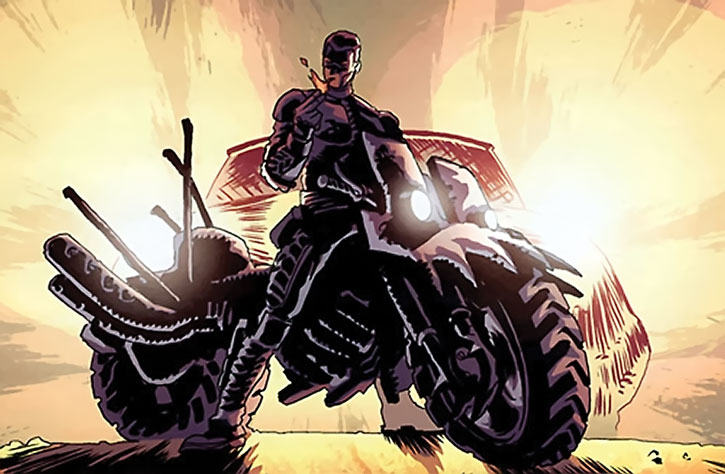 The client, a powerful drug lord, held his sister hostage and still Nick entered his headquarters and threatened to kill them all unless his sister was released. Hard and effective tactics indeed. He also felt that he had to save Becki, whom he didn’t even like very much, from the horrors of mutant masters, and so risked everything to liberate her.

That said, give him a job and he will carry it out well. Having been burned before he insists on knowing what it is that he is transporting, although sometimes it’s so obvious that he doesn’t have to ask. It seems he prefers solo work and will not transport people, but other that that almost everything goes. Yes, hire Nick; he will complete your deals anywhere in the wastelands!

“There’s enough moonlight to see where we’re going. With the lights off, they can’t see us. And we can use gravity to take us down the hill so they don’t hear us either. I do this all the time on the Phoenix run.”

“Becki, in the time it would take me to explain to you how to survive in the zone, they will have roasted me on a spit and turned you into a lumpy baby factory. Now shut up and come here.”

Becki [about pursuing mutants]: “Maybe they won’t bother us.”
Nick: “Yeah, ’cause they feel such empathy for the city dwellers who accidentally turned their world to ash. Besides, decades of radiation and inbreeding haven’t exactly been a boon to their sanity. Or I.Q.. I don’t think they’re familiar with the finer points of negotiation.”

In the years following the war, a young Nick was inspired by his uncle, the Space Cabby, and embarked on a family business of transportation. He refers to the wastelands as the Cursed Earth as he drives between mega-cities like those seen in Judge Dredd. Nick rides around the post-apocalyptic Los Angeles, Las Vegas, Phoenix and San Francisco areas.

In my own Apocalypse-DC campaign, these all turn into the world of Judge Dredd, after perhaps another world war, to much later on become the era of the Legion of Super-Heroes. 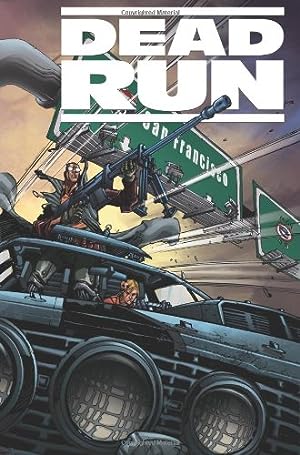 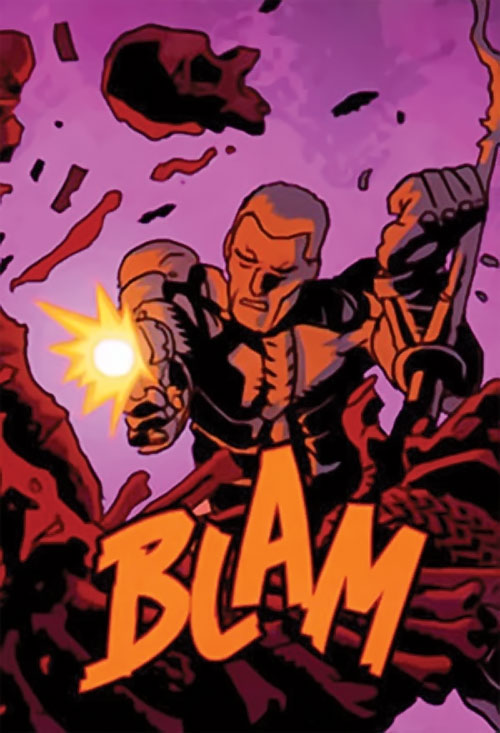 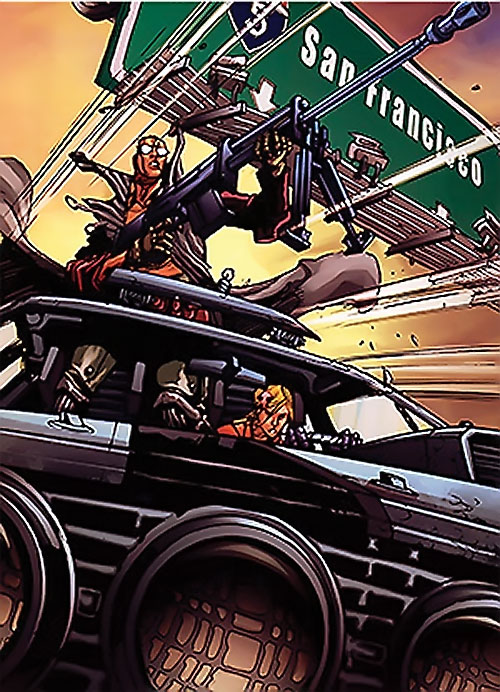 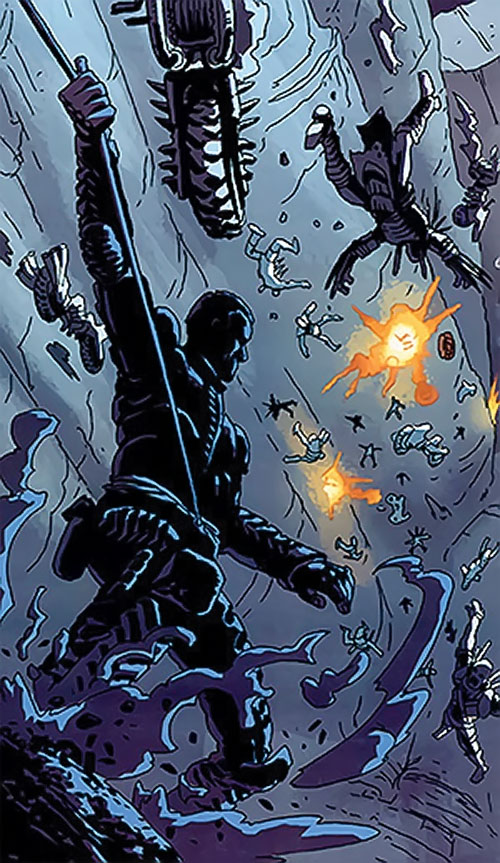