Night Girl possesses fantastic super-strength “which only Superboy or Mon-El can top.” While nowhere near invulnerable, she can also take a lot more punishment than a non-powered human being.

However, her strength and durability drop to normal human levels when she is exposed to sunlight. This weakness may be psychological or physiological, but it’s worth noting that on one occasion it was triggered by artificial light and on another occasion by a hypnotic illusion. Because her homeworld of Kathoon is in perpetual darkness, Lydda also has the power to see in normal darkness.

As a member of the Legion of Substitute Heroes, she took the LSH’s course on personal combat training, allowing her to take full advantage of her physical powers. She is also skilled in the use of all Legion equipment, vehicles, and spacecraft. She can fly using her Legion Flight Ring.

Night Girl was the daughter of one of the most renowned scientists of Kathoon, a planet with a dead and distant sun which is heated by internal geothermal activity. Like all Kathoonians, Lydda can see in the dark. Because of their Terran heritage, humans from Kathoon can also adapt to normal sight, but take a period of adjustment before they can focus properly.

Lydda’s father had always wanted a son and, lacking one, he taught his daughter to be completely self-reliant and prodded her toward being successful. When she grew older, he used a vitalizing ray to give her limited super powers, primarily super-strength.

In part, this was because Lydda, like most of her generation, was a huge fan of the nascent Legion of Super-Heroes, and secretly had developed a crush on Cosmic Boy, the Legion’s first and quite dashing Leader. 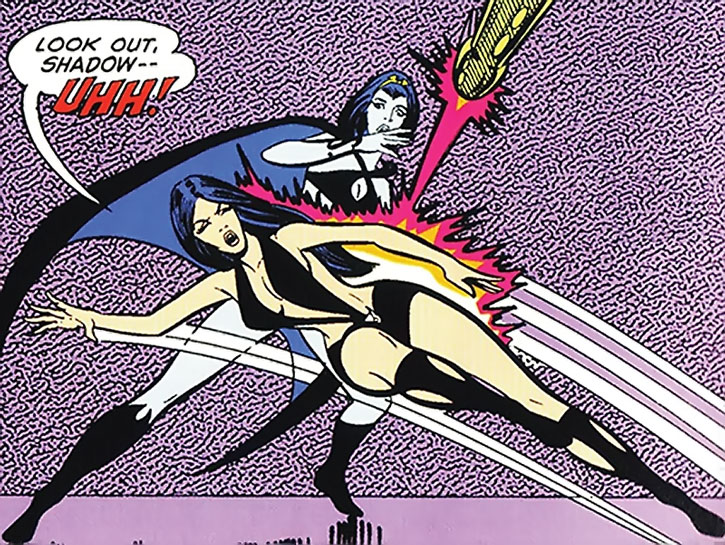 She asked her father to help her develop super powers that would qualify her for Legion membership. Though the vitalizing ray was successful, she only possessed her strength in darkness or in artificial light. Sunlight returned her to normal.

She gamely applied for Legion membership despite her limitations, but was rejected. Unwilling to give up and have all her efforts come to nothing, she joined together with four other Legion rejects to form a secret auxiliary of “Substitute Legionnaires” who would pitch in behind the scenes or when the LSH was unavailable.

Inevitably, their activities came to the attention of the LSH, and the Subs were made a special branch of the Legion Reserve.

Once the Legion began officially recognizing the Subs, the two groups met intermittently for talk and training. During these meetings, Night Girl finally got to know Cosmic Boy, and the two have been a couple ever since.

Night Girl enjoyed some measure of notoriety, as arguably the most powerful Substitute Legionnaire, and the girlfriend of a Legion founder. She was slightly disappointed when Cosmic Boy resigned active status as a Legionnaire, since she more than the other Subs had enjoyed a “vicarious membership” through their relationship.

When Polar Boy disbanded the Subs, she was deeply disappointed, but persevered, founding a second, short-lived team where she and Rokk served together for the first time.

After five years gap and after the Legion and the second group of Subs broke up again, Lydda and Rokk decided to get married and relocate to Braal to aid in relief efforts there. They remained there until Rokk and Reep (Chameleon Boy) Daggle decided to re-start the Legion. They then relocated to the new Legion HQ on Talus.

Lydda was pregnant most of that time, and eventually gave birth to a son, Pol, named for Rokk’s deceased brother, Legionnaire Magnetic Kid.

Lydda is a tall, beautiful woman with black hair and blue eyes. As a heroine, she wears a dark black, full body costume with a stylized owl emblazoned on the chest. In her early years she had a funny bouffant “beehive” hairdo, but she now wears her hair down.

She wears various capes, sometimes black, sometimes grey, and sometimes translucent or transparent. She sometimes wears black gloves, and often has a belt of metallic links. She carries herself with poise and confidence, but still winces a little in bright sunlight.

A romantic, willing to take impossible leaps on faith, Lydda is a strong, confident woman. She is able to accept setbacks but is sure that they are never permanent. As she herself said, anyone who joins a Legion of Substitute Heroes has to qualify as a cockeyed optimist. 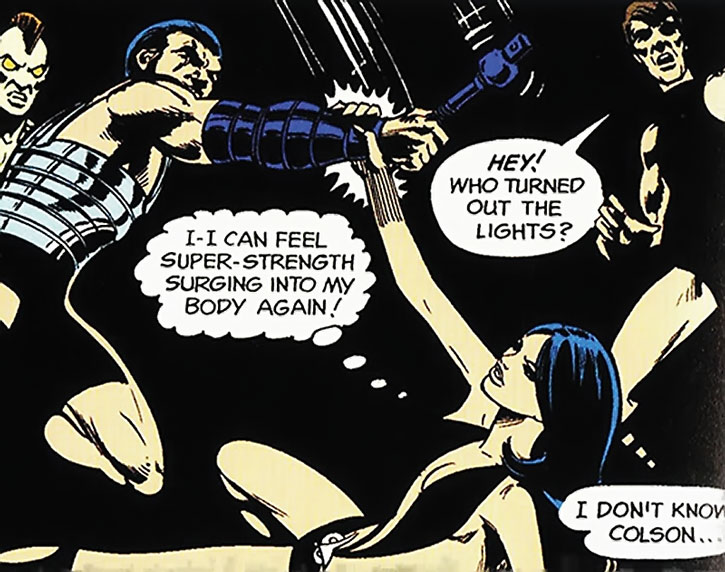 There were times in her life when she struggled with feelings of inadequacy, particularly after her initial rejection by the LSH, but that is a thing of the past. She is no longer the girl who was content to quietly pine away over an undeclared love and constantly whine about the limits of her powers.

She has learned a directness and forthrightness that she did not have in her younger days. She occasionally shows impatience with Cosmic Boy’s analytical, brooding manner, preferring direct action. She also wishes he shared a bit more of her romantic temperament, but the two have a mature and abiding love.

“Easy, Rokk… it’s only me… Forgive me for punching you out ?”

“But if I couldn’t get close to Rokk, at least I was going to use my powers — be a hero.”

“Can we worry about that later, Rokk — please? Don’t overcomplicate things while we’re fighting.”

“We had such dreams… and they’re dead… dead as the dry seeds drifting down around us ! But I…[gulp]… won’t cry….”

“Cosmic Boy ! So masculine and secure ! He makes me feel like a girl instead of a freak ! If only I could be with him in the Legion !”

There’s a post-Zero Hour version of Lydda in the current DCU. The “previous stats” listed below should describe that version of the character pretty accurately. The original Night Girl would likely show up only via Hyper-time .

However, there were other ways to fit the original 30th century into the post-Crisis DCU without a pre-boot— and I don’t mean using a pocket universe, either.

Probably the most essential need is to have Clark Kent in the Legion as Superboy, even if he was never a Superboy in the 20th century. Have the LSH meet a teenage Clark Kent and invite him to the 30th century to become a honorary Legionnaire, honorary or not as you please, as Superboy.

With that in place, the Legion’s pre-Crisis history can be as intact as you please, with the caveat always in place that inconsistencies are due to imaginary stories or chronicler’s errors.

Bonuses and Limitations:
Ultra Vision is only for seeing in the dark (-1).

Drawbacks:
Power Loss (when exposed to direct sunlight, Night Girl’s STR drops to 03 and her BODY to 04).

These were Night Girl’s stats when the Substitute Legion was first founded.

Bonuses and Limitations:
Ultra Vision is only for seeing in the dark (-1).

Drawbacks:
MIA to Cosmic Boy, Power Loss (when exposed to direct sunlight, Night Girl’s STR drops to 3 and her BODY to 04), Secret Identity (the whole Substitute Legion was a secret).

Lydda was basically a non-combatant after she married Rokk. Her stats are unchanged, but she acquires the Dependent Drawback. Wealth probably should drop an AP or even two, at least while she and Rokk are living on Braal.

For those who’ve seen the previous version with normal BODY but Damage Capacity, I’ve since come across definite evidence of her having a superhuman Body score. 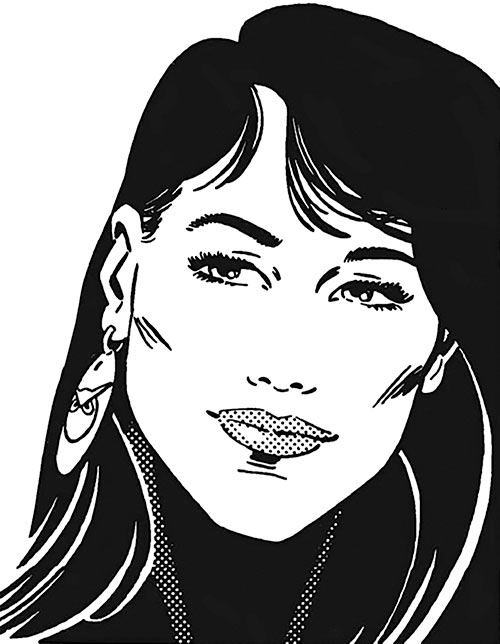 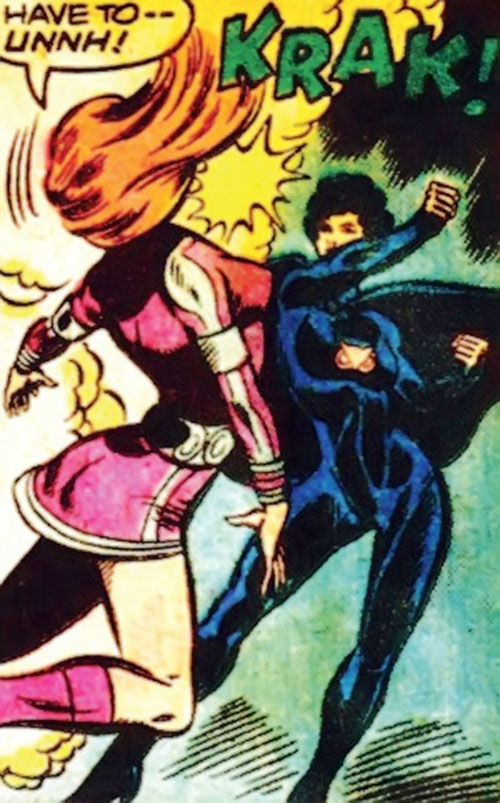