“This is the Night Man on the air…”

The Night Man operates a pirate radio, broadcasting most every night over San Francisco. At first it was just a tool in his crimefighting endeavours. It was used to send messages over Frisco that he was looking for the Freex. Then it became one of his favourites activities (and he has a lot of activities, since he never sleeps).

The Night Man uses his radio station to talk about his activities, his feelings about San Francisco at night and its threats, his philosophy… It’s also a way to broadcast his discerning musical choices.

The Night Man is hunted by the FCC  for this. However, he moves his equipment every night to a different spot. When he gives a phone number for listeners feedback, it’s always a line he phreaked  for a few hours.

The Night Man pirate radio station is a fan-favourite feature of San Francisco. It is well know in the city’s underground and youth subcultures. It has greatly helped the Night Man to establish his reputation as mysterious shadow vigilante tough guy, music lover and charismatic radio host with a Vincent Price -like voice.

Night Man has but one real superpower. He can hear “evil” thoughts in the mind of nearby persons. This only works for actively evil thoughts, like thinking about murdering someone. It also enables him to react with startling speed to aggression. This is because he can hear the thoughts of those wishing to shoot or beat him before they act.

However, if the subject does not consider their thoughts to be evil (like a animal, or a completely amoral person), then they do not register.

His eyes are very sensitive. This allows him to easily see at night but make him sensitive to bright lights.

He doesn’t need to sleep.

Johnny Domino has also trained hard in several physical disciplines, including aikido, tae kwon do, gymnastics, athletics… since he was five. He has won cups and awards in many sports while he was younger. He’s surprisingly agile, strong and conversant with hand-to-hand combat.

It seems that, like Mister Terrific (Terry Sloane) before him, he has a natural aptitude for having natural aptitudes. Everything seems more easy for him than it should. He has a obvious gift and high success rate at everything he dabbles in. He’s a particularly competent hero, and he rarely loses control of a situation – or fails to gain such control.

His costume has infrared lenses, as well as one telephoto lens (with a camera and mike feeding a VHS tape). His gloves have taser plates on them, and he carries a gun (seldom used).

He’s also a connoisseur of jazz and famed sax player, with about eight solo albums behind him.

Johnny Domino grew up in an entertainment park called Playland-at-the-beach – which had been closed for 30+ years. His father was a guard there, making sure there was no degradation of the closed rides, or theft of equipment. The place was considered a landmark, to be kept in the best possible state.

Domino’s father had been impressed, while in Việt Nam, with what rigorous training could do for a man. He tried to learn everything he could to raise his son as best as he could. He made the boy train hard in both sports and scholarly school subjects. This continued after Johnny’s mother died, and kept father and son quite close, even to this day.

Johnny went on to become a successful sax player and all around free-spirited cool cat. However, one day, while he was walking in the street, a nearby tram was hit by something and exploded. Johnny had a fragment of metal hit him hard in the head, and was rushed to an hospital.

Lights on the Moon

The doctors couldn’t remove the fragment, as it might damage his brain. But it seemed the only lasting effect would be that his pupil were permanently dilated, making his eyes sensitive to light. Other effects only appeared later.

Later on, many of the people who were in the tram had gained superhuman powers. Some banded together as the Strangers. On his end, Johnny discovered he too was experiencing strange events. His eyes could see in the dark, he didn’t need to sleep anymore, and he could “hear” evil thoughts.

After some hesitation, Johnny started to act against those with evil thoughts. He tried to prevent a burglary and then a murder. He failed, however, on his very first case, as Deathmask killed an innocent waitress called Ginger.

This death and the associated guilt kept spurring the Night Man on to become a better crimefighter. Although he felt less guilty after having confronted Ginger’s father, who had become the villain Rigoletto, it still remained a large part of his motivation.

Guardian of the night

His learning curve was impressive. The Night Man kept pushing his physical limits and tactics to new levels and improving his crimefighting equipment. He began to encounter enemies, from two broad categories :

While Johnny wasn’t aware of this at first, his father almost immediately deducted who the Night Man was. When the police and the Night Man were dangerously failing to stop JD Hunt’s robot Teknight MkI, Johnny’s father intervened to stop it. He saved his son’s life and told him he knew the truth.

Subsequently, the Night Man made his base in one of the closed rides at Playland, the “tunnel of horror”. This was a perfect HQ given his activities. He continued to have adventures ; the last I read was the one where he faced Loki, from the Marvel Universe. The whole Ultraverse then went into the toilet.

As the Night Man, Domino tends to have a low, threatening voice – something like Vincent Price, probably.

He considers his costume a strong asset. People encountering the Night Man will often assume that he’s a superhuman, with powers like bulletproof skin, superstrength, heat vision and the like. As a result they will be more cautious and more easily intimidated than if they knew that faced somebody with very little in the way of big bad superpowers.

In darkness and/or fog (the normal conditions in which the Night Man operates), he often looks like some kind of sinister goblin or wraith. This comes from his cape, asymmetrical red “eyes” and wild hair.

Johnny Domino is a very positive, well-adjusted man. He knows about and loves life, and is acutely aware that he’s here to play the hand he has been dealt and make the best of it. He lives as he see fits. Johnny often draws parallels between life, jazz and his activities as the Night Man, all being “free form improv in the dark”.

His take charge, dark outlook as the Night Man is somewhat different from the laid-back, smooth life as Johnny Domino. The Night Man, both as hero and radio host, has a strong tendency to theatrical, dramatic lines, poses and dialogue.

Johnny is so nice and of such humanity that people almost never realize they should be jealous of him. After all, he’s handsome, muscular, talented, carefree young man who leads exactly the kind of life he wants to. Yet he just comes across as interesting fellow and cool cat.

Johnny has derogatory word he inherited from his father : “scuzzwipe”. He’s careful to never use it as the Night Man.

“I know too well what the night holds. That’s why I’m taking charge of it.”

I suppose the Night Man could be considered a Hypertime  version of Shadowman. He lives in his own nocturnal world in San Francisco, and can be imported to most other universes without a problem. In the DCU he’d probably be openly patterned after the Gotham City urban legend, the Batman.

Connections:
SFPD (Low – has access to their computer system using his father’s login and password), Lieutenant Biggs of the SFPD (Low), Freex (Low).

One of the remarkable aspects of the Night Man is that he’s always learning his trade, improving himself and fine-tuning his equipment and tactics.

When he started out, his DEX was 05, his STR 03 and his BODY a 04, with the DEX-linked skills being adjusted in consequence. His INT and most non-DEX skills were likewise two points lower.

His costume only had IR lenses and his sole equipments were a line and a gun.

Thus, he might be one of the few comic books characters to actually follow the advancement rules in the MEGS books. 🙂 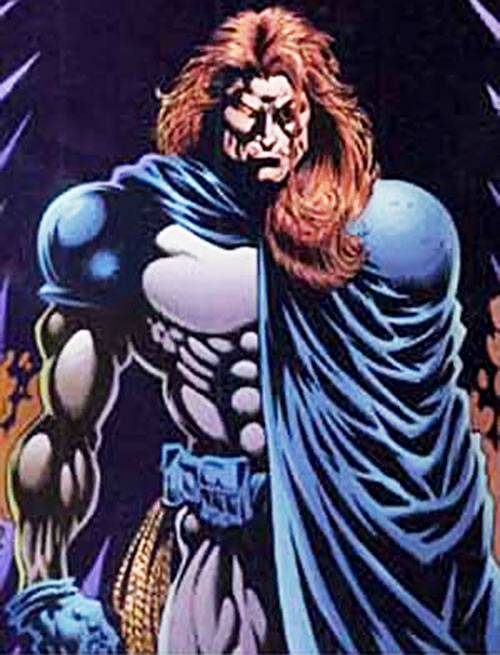