“And in the wake of his stride, doom and destruction follow ! I know… I’ve seen him ! The Night Phantom is no mere myth, no false legend… I’ve seen him and he LIVES !”

The Night Phantom is an obscure Iron Man villain. He essentially appeared but once, in 1969.

But I find that he has a simple, effective charm with a nice look and straightforward powers.

The Night Phantom can be used both as a stock super-strong opponent and as a horror character. His original appearance used lite versions of common mainstream horror tropes of his day. So you could lean into that, after sweeping under the carpet the more date aspects of the 1969 story.

The Night Phantom’s superhuman brawn is greater than the transistorised strength of the then-current Iron Man armour (“class 50”).

He could even endure repulsor blasts without visible harm. However, pouring it on with both repulsors on overdrive could beat the Phantom back and damage him.

There are hints that the Phantom was physically denser than a normal human being. 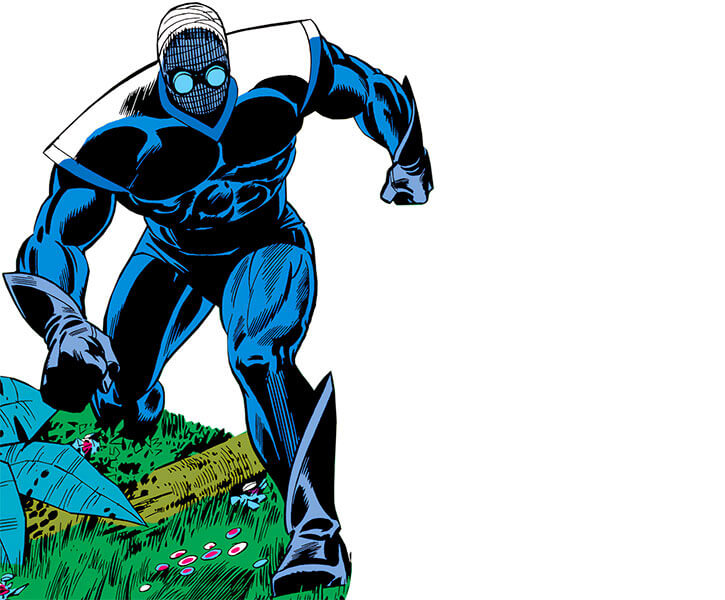 The Phantom wears special goggles and bandages that block the radioactivity that his body emits.

He also has lifelike, albeit fragile plastic masks that look just like Hoyt’s face used to. Apparently they are applied over a foundation of glue. Somehow, they are able to completely hide the Phantom’s goggles.

As Hoyt he drives a modified Jeep that can be operated without pedals. This car also features a cradle to store and deploy his wheelchair.

The Phantom’s paraphernalia includes a gigantic boulder blocking the entrance of his cave, which only he could roll away. Even Iron Man could only move it by bracing between it and the wall, and using his full body’s strength.

Another asset is his loudspeakers. These broadcast the sound of powerful pseudo-voodoo drums from the Phantom’s cave.

The sound is reverberated through the natural network of caves and cavities under the island, and can be heard for miles. With the echoes, it sounds genuinely eerie.

During the 1960s the ageing Travis Hoyt was a well-known novelist. Upper-class Americans such as Tony Stark could be expected to have read him.

However, a plane accident crippled his legs. Bitter over his age and handicap, he retired far from Western societies. He ended up on a minor Caribbean island, not far from Haïti.

As his villa was being built, Hoyt fell through unfinished flooring. He crashed into an underground pool.

The water was radioactive and possessed strange properties. Perhaps it was related to the Fountain of Youth in Subterranea, or the atmosphere of the Netherworld of Queen Kala.

Hoyt was greatly energised, and his crippled legs were soon miraculously healed.

The novelist regularly submerged in the radioactive water, developing superhuman strength and durability.

However the radiation also burned off his skin. Thus, he procured special bandages and masks to hide his altered appearance. With everything on and in his wheelchair, nobody would notice any change.

Stark Industries eventually came to the island to build a plant. Hoyt hated this – it sullied the “primitive charm” (sic) of his retirement.

Furthermore, he loathed Tony Stark. The industrialist was the current love interest of Hoyt’s acquaintance Janice Cord, toward whom the novelist had an unrequited romantic interest despite their age difference.

Adding injury to these insults, the Stark construction work resulted in underground fissures. These threatened to drain away Hoyt’s secret radioactive pool.

To stop the construction, Hoyt became the Night Phantom.

Perhaps building up on inspiration from the Lee Falk comic strip character, he also set up loudspeakers to play reverberating drums. This gained him an instant voodoo mystique that terrified the locals.

Tony Stark came to inspect the plant, and the Night Phantom attacked him.

Hoyt kidnapped the police chief, then Janice Cord – who discovered his true appearance as she struggled against his grip. The increasingly insane novelist’s plan was to plunge Cord into the secret pool so she would be just like him.

Iron Man intervened, but could barely hold the powerful Night Phantom at bay. Yet the Phantom wasn’t strong enough to crush his foe, either.

Needing more strength, the Night Phantom leapt into his pool for further irradiation. However, the floor had been so weakened by the vibration from the loudspeakers that it collapsed.

The Night Phantom and the water were drained further underground, and vanished.

In 1971, Mister Kline (aka the Assassin) built a robot look-alike of the Night Phantom to confront Iron Man.

This robot was soon destroyed and not seen again.

Travis Hoyt eventually was captured by S.H.I.E.L.D. and imprisoned in the Pleasant Hill secret facility.

He presumably spent years, if not decades, in this manipulated micro-reality. Like the other Pleasant Hill inmates, he believed himself to be an ordinary person living an ordinary life in idealised small-town America.

But the Pleasant Hill “spell” was broken in 2016, and Hoyt got out.

He somehow ended up in New York City. The Phantom rampaged out of rage at having had years of his life taken away from him, and his sense of identity so thoroughly manipulated.

There have been two sightings since : 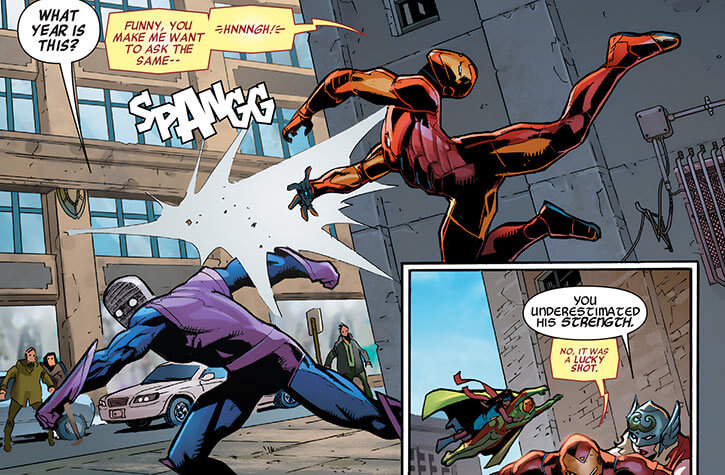 The Night Phantom is in costume at all times. But he wears his Hoyt mask and clothing over it, and pretends to be wheelchair-bound.

One would imagine that he looks like a severe burns patient under the bandages.

Hoyt is deranged, though with effort he can seem merely insufferable.

This seems to be caused by the radiation. It warped his mind and soon he only lived to protect his precious underground pool. He views his secret pool with awe, like a mix of cultist and junkie.

Hoyt comes across as an acrimonious, crotchety old man who hates change.

He’s also a hardline conservationist when it comes to the island. He has a Romantic Coloniser thing about “primitive innocence” and civilisation being inherently corrupt and destructive.

That Hoyt is a writer is obvious in his emphatic, declarative, scenery-chewing dialogue.

He is fixated on the young and arresting Janice Cord.

Hoyt also hates Tony Starker for being younger, richer and more technologically savvy than he is.

(As Hoyt): “I’m not interested in your pity, Stark — or your literary criticism ! All I want to hear from your kind is that you’re leaving our island alone ! Your projects and ‘progress’ are destroying its natural beauty and primitive charm ! It’s got to stop !”

(As Hoyt): “You’re both fools ! There are stranger, older forces at work here than you could suspect ! Call it voodoo, call it anything… you may regret ignoring this !”

(As Ms. Cord tears away his mask) “Won’t your mind comprehend what your eyes see, what your clawing fingers reveal ? Weren’t you prepared to see a primitive island superstition confirmed..?! Can’t you look upon a voodoo legend come to life..?! Are you too stunned to face the… NIGHT PHANTOM ?”

“Quite right, inspector ! As I am [radioactive], once I’ve peeled away completely the plastic disguise that is Travis Hoyt ! A small price to be the Night Phantom instead ! Now, let the voodoo drums sound… announcing again that the living legend stalks ! And tonight, my prey is no mere mass of mechanized junk ! Tonight, I hunt the defiler of my island’s primitive innocence… tonight, Janice, I bring death to the man you’ve chosen over me !”

“No one stops the Night Phantom !”

Secret Identity, Strange Appearance, Minor Psychological Instability, SPR (Radioactive. Long-term exposure to the Phantom would be deadly without his bandages, and his footsteps, what he has touched, etc. become faintly radioactive).

The Sealed Systems Power wasn’t clearly demonstrated, but would be logical.

The Flame immunity isn’t clearly demonstrated, but the Vision didn’t quite seem to damage Hoyt with a solar blast.

It seems likely that Hoyt’s strength continued to grow over the decades. He Stunned Iron Man (Tony Stark) with one punch, even though Stark was wearing a 2016 IM power armourStrength-enhancing body armour, like Iron Man’s.

While Stark argued that it was a lucky shot, this sounded very much like a poor excuse, and the Night Phantom might have STR 15 or more nowadays.

His BODY might also have increased a bit. Yes, he was taken down fairly rapidly, but that involved two direct hits from Thor (hammer throw and lighting strike). 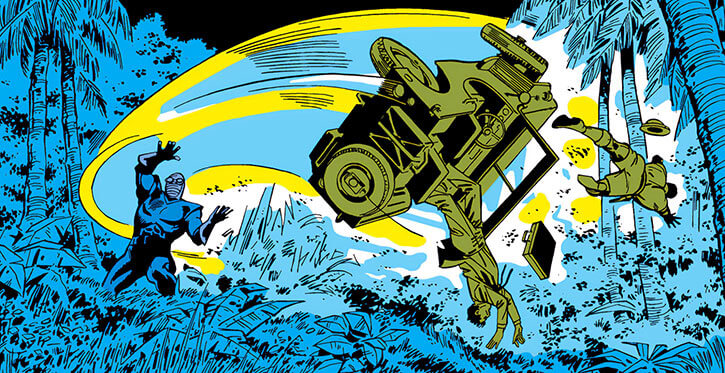 Same as the DC Heroes one, including the Strength of 15. Rather than BODY, it likely is his Toughness and Fortitude that increased.