Night Rider possesses numerous supernatural powers, conferred upon him by the possession of his body by one of his ancestors who wore the mantle of Ghost Rider. He may become intangible at will. In this non-corporeal state, his weight is nil, and he may walk or run on air as well as land.

Night Rider can also become invisible at will, either fully or in part (for horrific effect). These powers are shared by his ghost-horse Banshee.

Night Rider has certain mystical perceptions allowing him to sense the presence of “evil”. He has felt “evil emanations” from about 100 miles away.

The spirit of Night Rider may only inhabit his descendant’s body for 6 hours at a time.

Night Rider wields two mystical revolvers that appear to be Navy Colt .44 caliber cap and ball (’six-shooters’). They shoot projectiles of light which produce nerve deadening effects on those they pass through.

These bullets are unaffected by solid objects. For example, Night Rider could shoot someone on the other side of a brick wall and the phantom bullets would pass through the wall unimpeded and affect their target.

Hamilton Slade is an archaeologist whose interest in the lore of the American Indians was spurred during childhood by his family’s claim to fame in the history of the American Southwest.

His great-great uncle, Carter Slade, had been a schoolteacher who was gunned down by outlaws soon after moving to the frontier. Found by a friendly tribe of Comanches, Carter was nursed back to health by the medicine-man Flaming Star.

The aging Indian believed Carter to be the champion that the Sky-spirit had revealed to him in a vision. Carter Slade was given a special chalk white cowboy outfit impregnated with a special phosphorescent dust that was recovered from a meteor. Wearing it, he soon created the legend of the phantom horseman who rode the frontier in the cause of justice. 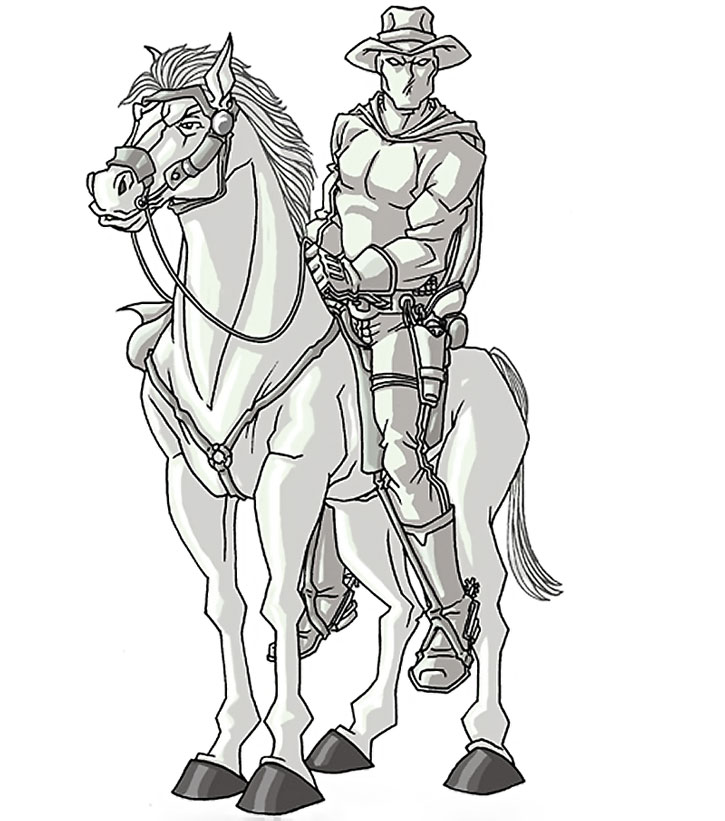 When Carter Slade was killed by outlaws, his brother US Marshall Lincoln Slade adopted the identity and carried on the legend. Although Carter died unmarried and childless, Lincoln had two sons, one of whom was the grandfather of Hamilton Slade.

Fast forward to the modern day

While studying archaeology, Hamilton hoped to some day discover the burial place of his famous great-great-grandfather. One day, while leading a team of archaeologists from the University of Nevada , Slade did come upon the resting place of his ancestor, in a subterranean cave beneath a Comanche  burial mound.

Unable to contain his excitement, Slade investigated the site alone. He was startled when the ghostly garb of the Night Rider levitated from a burial urn as he approached. In a blinding flash, Slade was possessed by the spirit of one of the phantom horsemen and acquired a host of spectral powers, far beyond those possessed by his mortal ancestors.

Joined by the ghost of the Night Rider’s horse Banshee, he galloped off into the night to save the stuntrider Johnny Blaze (Ghost Rider III) from the magician Moondark. Upon the successful completion of his mission, Slade resumed his normal form, with no memory of his possession.

Ghost rider in the sky

Now whenever evil is nearby, Slade is transformed into the Night Rider into combat it. He still has no idea why he is subject to occasional memory lapses.

The Night Rider was one of the five individuals who intercepted a call for help by Rick Jones to the Avengers when Hulk was under the influence of the Corruptor. After a semi-successful showing vs. the Hulk the heroes decided to form the Southwestern based group the Rangers.

More recently, after the Civil War, the Texas Rangers have become the official, registered super-team in Texas. All members have Credentials (Initiative, Low) and access to Extensive Headquarters as members.

The Rangers were the first line against a massive HYDRA attack targeting the POTUS’ private residence in Texas. They were defeated, but bought enough time for the rest of the Avengers to arrive.

When the Secret Invasion started, it was revealed that Lobo, Red Wolf’s companion, was an infiltrated Skrull. They fought against him, until Shooting Star killed him.

Texas Twister and Shooting Star joined with both the Initiative and the Skrull Kill Krew in the final combat in Fort Hammond, where the blonde Texan was apparently killed by lethal gas.

As Night Rider, Slade is a chalk-white cowboy in a full face mask whose body glows eerily. His voice is chilling and hollow, a voice from beyond the grave.

As Slade is a amiable enough fellow who is driven by to find his family’s past. As Night Rider he possesses a stoic intensity, a drive to punish evil and to promote justice.

For Rangers history in the DCU see Texas Twister’s write-up. As for the Night Rider, it would be an easy enough task to incorporate western heroes such as Jonah Hex and Scalphunter into his past.

As for the spirit of the Night Rider, something like the Servant of the God of Vengeance (the Spectre) or some sort of tie in to that comes to mind.

Bonuses and Limitations:
Intangibility and Invisibility, can effect any or all of his selected body parts and equipment.

Drawbacks:
Alter Ego (uncontrolled), Misc. Drawback (can only remain in ’hero’ identity for 13 APs of time per day.) 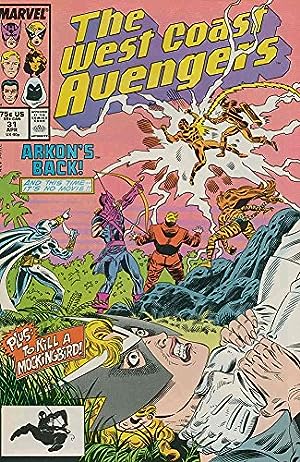 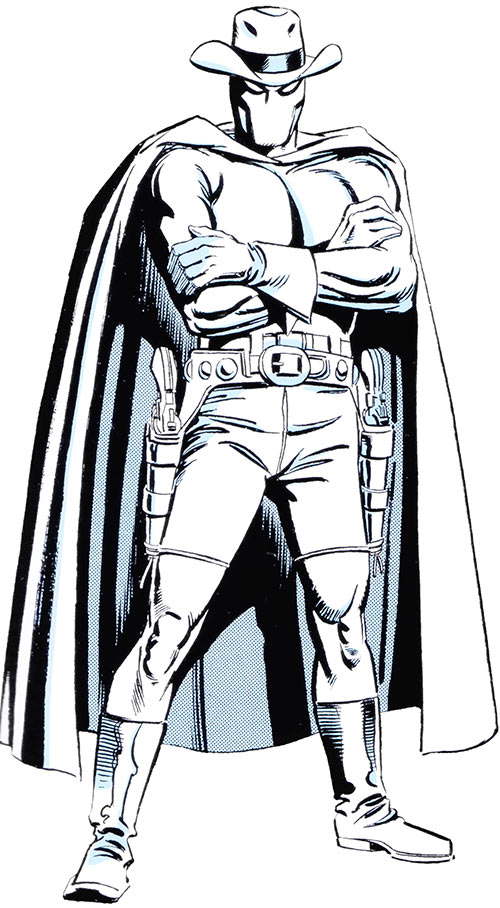 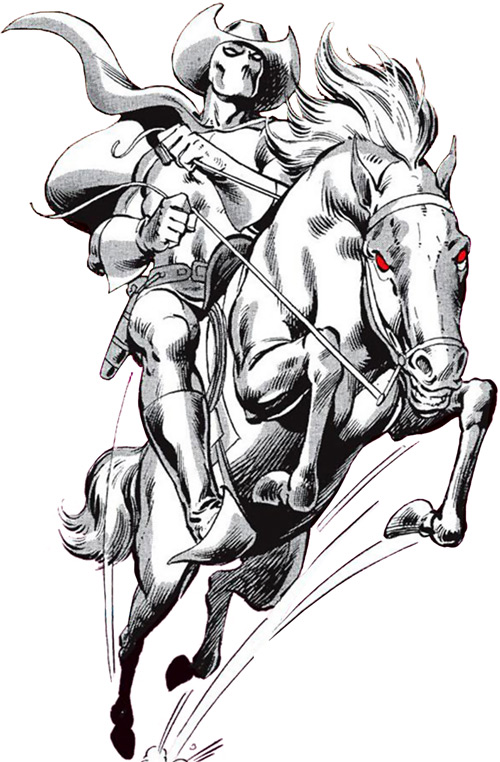 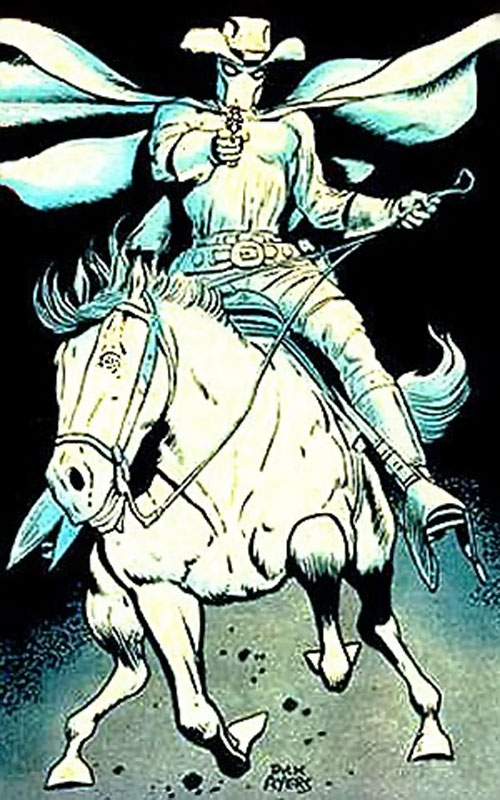