When crime lord Charles Knight died, his son Anton returned to the family home and met Natalia (also known as Nocturna), Charles Knight’s adopted daughter. Anton and Natalia fell in love. When their inheritance money ran out, Anton began his career as the Thief of the Night.

Anton Knight was very successful, moving through the darkness like a shadow. He defeated the Batman in combat several times, and always eluding him afterwards.

When Anton saw Nocturna with another criminal partner, Sturges Hellstrom, he believed they were lovers. Knight killed Hellstrom and confessed to Nocturna what he had done for her out of love. Horrified, Nocturna rejected him.

Anton tried to kill himself, but stopped at the last second. He was still drawn to Nocturna. He then saw her with another man, one she really did love : the Batman. Calling himself Night-Slayer, Anton tried to kill the Batman. Nocturna shot Knight in the back to stop him, but Anton eluded capture by slipping through the sewers.

Knight was nursed back to health by a blind girl who believed he was the Batman. This put the germ of a very dangerous idea in his head.

In his next encounter with the Batman, Night-Slayer tried to shoot him. The bullet missed, but Batman received a concussion from the blast. It was great enough to momentarily disorient him. Batman began babbling about his being the Night-Slayer, and Anton Knight immediately exchanged his costume for Batman’s.

In this disguise Knight carried out a crime wave, turning the press and the police against the real Batman.

Batman returns in his right mind to defeat Anton Knight, but as usual, Knight escaped justice. Knight showed up once more in a murder spree that led to Nocturna, but was finally stopped, captured and brought to justice by Batman and Catwoman.

Until his mental conflict is resolved, Night-Slayer’s every action will be directed toward the murders of Batman and Nocturna. That fact, coupled with the possibility of Night-Slayer’s recognizing Bruce Wayne’s face as that beneath the Batman’s cowl, makes him potentially more dangerous than he already is. 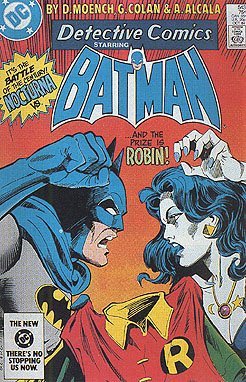